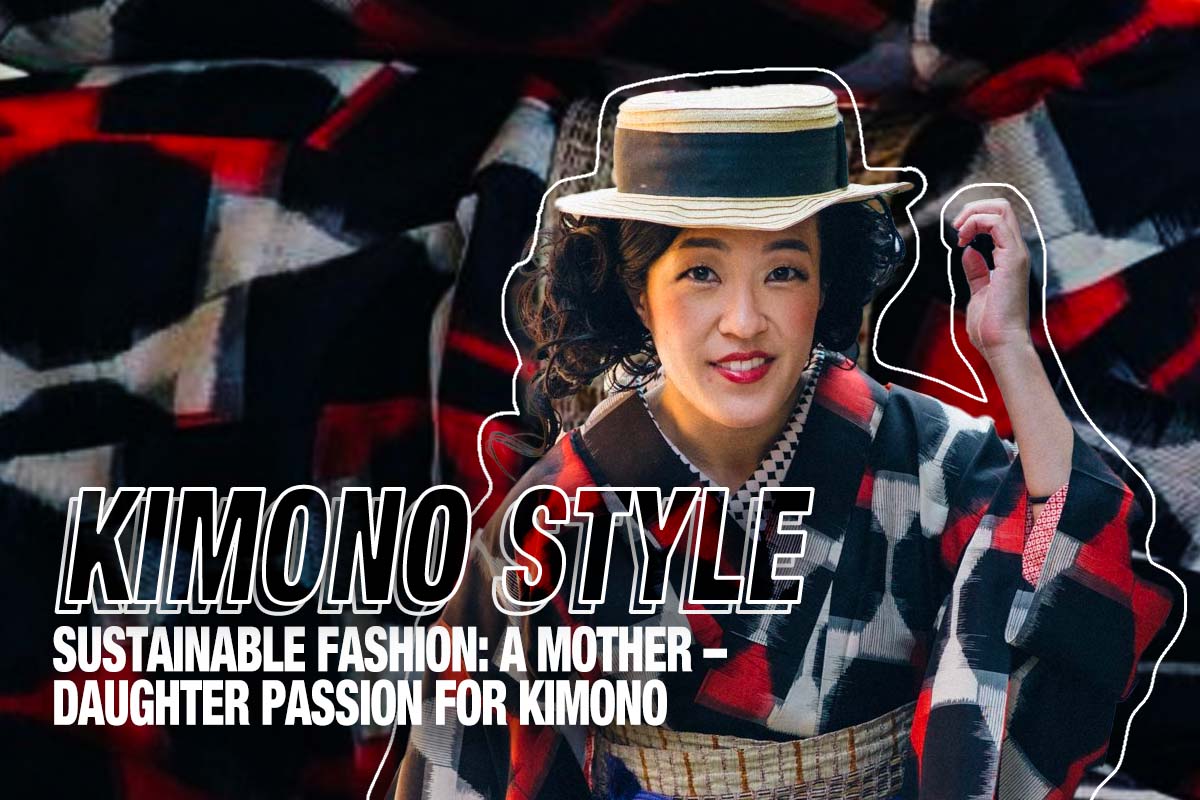 Tamaki and Nodoka share a love for kimono fashion

One of the things I really love about kimono is the way that it joins people together in many different ways. If you are ordering directly from an artisan or workshop, then you might know who actually made the cloth that your kimono will be sewn out of, and that is a real joy that rarely happens with regular store-bought clothing.

Another way that kimono join people together is that they are often passed on between female members of families. They are an heirloom in the same way that jewelry or sets of dishes might be.

It is said that kimono last a hundred years, and I have some that are at least that old. This means that they will last for three generations.

As the shape does not change, and near enough one size can work on various bodies, this makes the kimono a sustainable option. Kimono are also worn on ceremonial occasions where family members will gather together, and enjoy celebrations and family communication.

Fashion in the Closet

This is the third article on my kimono closet project. This one was especially fascinating for me because it was the only pair of related people that I interviewed.

Tamaki and Nodoka are mother and daughter. They are very much joined together by their interest in kimono.

Tamaki has only memories of wearing kimono as formal wear. She wore kimono for seven, five, three and coming of age ceremonies. Before marriage she went to a dressmaking school. After marriage she wore kimono for her children’s entrance and graduation ceremonies. But it was only after her daughter, Nodoka, started wearing kimono casually, that she sewed a kimono on her machine for the first time ー at Nodoka’s request.

In a reversal of traditional roles it was the daughter, Nodoka, who inspired Tamaki to start wearing kimono again and also to begin sewing kimono.

Nodoka first became interested in kimono when she was in art school in the 1920s and 1930s. As a graphic designer, the art of these periods was a source of inspiration for her. She saw a picture of a meisen kimono in a magazine, and she decided that she wanted to dress like that. She asked her mother to teach her the proper way to dress, even though her mother didn’t wear kimono regularly. Once she got interested in kimono, she asked her mother to sew some for her.

She loves vintage styles and British fashion, and likes to look at international fashion magazines. She gets ideas from them and puts those ideas into kimono. Because her mother can sew, she can make items with interesting new fabrics, too.

Nodoka had her mother make a tartan check kimono in two colors, and she wore it with a leopard skin design obi, also made by her mother. This collaboration between mother and daughter through kimono is unusual, especially as the motivation comes from Nodoka, the daughter.

Tamaki keeps her furisode from her coming of age ceremony because her father chose it for her. She also keeps the kimono she wore when she first met her husband. These items have special memories in them. However, Tamaki says she would never have thought of wearing a casual kimono if it hadn’t been for her daughter.

Nodoka used to work in a very small design company, and she wore kimono every day. Unfortunately, that is not possible at her present workplace. Nodoka is a very stylish dresser though, and has been a source of inspiration not only for her mother, but also for other people.

Although Nodoka says that they did not have so much to talk about before, now she and her mother can enjoy talking about their shared love of kimono. They have both been in New Year kimono fashion shows, and enjoy participating together. The original items they produce, using regular cottons and other fabrics, are fun and stand out, even in the fashion shows.

In past eras, mothers taught their daughters to wear kimono. The older taught the younger. While the story of Tamaki and Nodoka is not typical, I think it is an increasing phenomenon.

Younger people have some kind of encounter with kimono, a graduation or some event concerned with kimono, and their enjoyment of it sparks an interest in older relatives. The older generation for whom kimono was just formal wear, are encouraged by their younger family members to re-examine kimono and their attitudes to it.

Find other columns on kimono by author Sheila Cliffe, at this link.