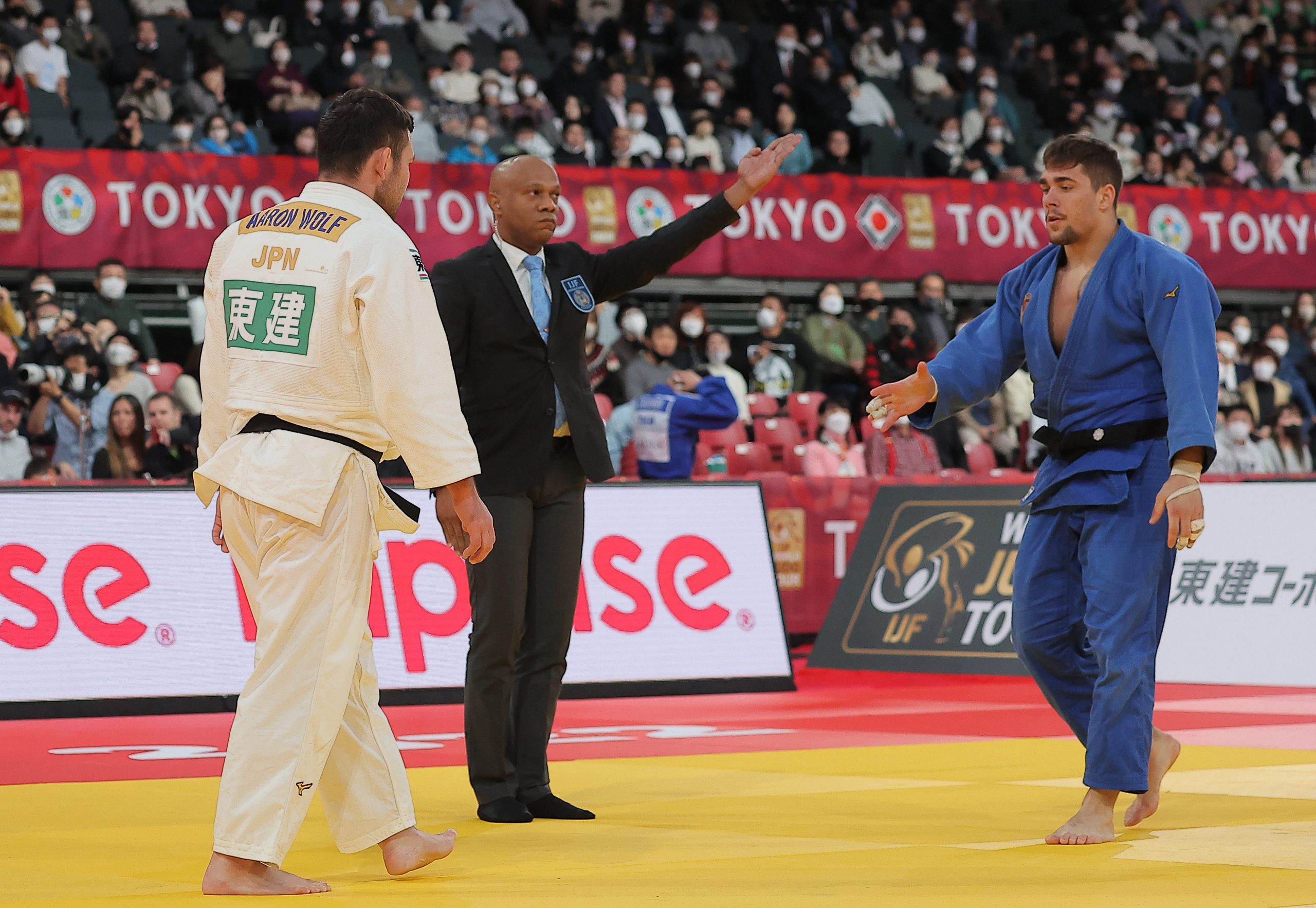 At the Tokyo Grand Slam, announcing the men's 100-kg class winner with a full house crowd watching at the Tokyo Metropolitan Gymnasium. (© Sankei by Makoto Nakai)

It is nearly the end of 2022. The major judo tournaments are over and winter is in full swing in Japan. We are now hearing reports of snow from around the country.

On the campus of Tokai University where I work, all the leaves of the keyaki (zelkova) trees have fallen. Now you can see blue sky through the branches, setting up a classic winter scene.

In this month's column, I would like to report on the international judo tournament Tokyo Grand Slam 2022, held on December 3-4 in Japan's capital.

I participated in this event in two capacities for the Japan national team. One was as vice chairman of the Strengthening Committee. The other was as chair of the Special Committee for Strategy and Branding, which played a role in tournament operations.

It was with the 2023 World Championships and the 2024 Paris Olympics very much in mind that I took the position as vice chairman of the Strengthening Committee.

Although the tournament missed the presence of Tokyo Olympic men's gold medalists Naohisa Takato, Hifumi Abe and Shohei Ono, it was a superb competition. Female judoka Uta Abe came out on top at this tournament to match her victory at the World Championships in October. Her stunning performance at the tournament unofficially earned her a spot on the Japanese team going to the 2023 World Championships.

There were several other top-flight matches as well.

It seems fair to say that the results of the recent Tokyo tournament narrowed down the competition for a spot on the national team going to the Paris Olympics. There is now a relatively small pool of athletes. That is because under the current national team selection system, realistically it is difficult to make the team if you haven't established a winning track record by this time, a year and a half before the Olympics.

Something I felt acutely at this tournament was that we need to focus on improving the training environment and raising the overall level of the Japanese team. I hope that in the days to come, as vice chairman of the Strengthening Committee, with the support of chairman Jun Konno, men's coach Keiji Suzuki and women's coach Katsuyuki Masuchi, I can help do just that.

Boosting the Public Appeal of Judo

As chair of the Special Committee for Strategy and Branding, I was involved with this tournament from the preparatory stages. Since I had previously never been involved in tournament operations, going in I knew next to nothing. Consequently, everything I saw and heard was fresh for me. And it proved a very productive experience in terms of learning new things.

The concept of the tournament was "Stepping out … Taking Japanese Judo to the Next Level." "Know," "See," "Connect," and "Spread" were event themes. Based on them we tackled various challenges.

The enhanced services offered within the venue in particular won high marks from attendees. Among the most popular of these were collaboration with popular judo animation artists, autograph sessions with judo players, kata (form) demonstrations by children in the hall after the qualifying round, and booths set up in cooperation with companies and organizations.

We were delighted to see the box seats with souvenirs sell out early. In fact, all seats were sold out on the second day of the convention. And the judo they witnessed apparently did the trick. An enthusiastic atmosphere pervaded the tournament on both days at Tokyo Metropolitan Gymnasium.

I believe this tournament suggested a new approach to watching judo matches. Now I want to build on these experiences from the Tokyo tournament to stage major tournaments in which judoka will take pride in participating. They should be tournaments which will also inspire and thrill fans. And make them want to come to paid events.

Looking Forward to a New Year

Well then, this is my last column for this year. Let me take a moment to thank all my readers for making 2022 a wonderful year.

I will be back in 2023 to bring readers around the world more news about my daily challenges and what is happening in the world of judo. I hope you will continue to read this column through the coming year.