Kosei Inoue: Moving Forward with Judo Into the Future 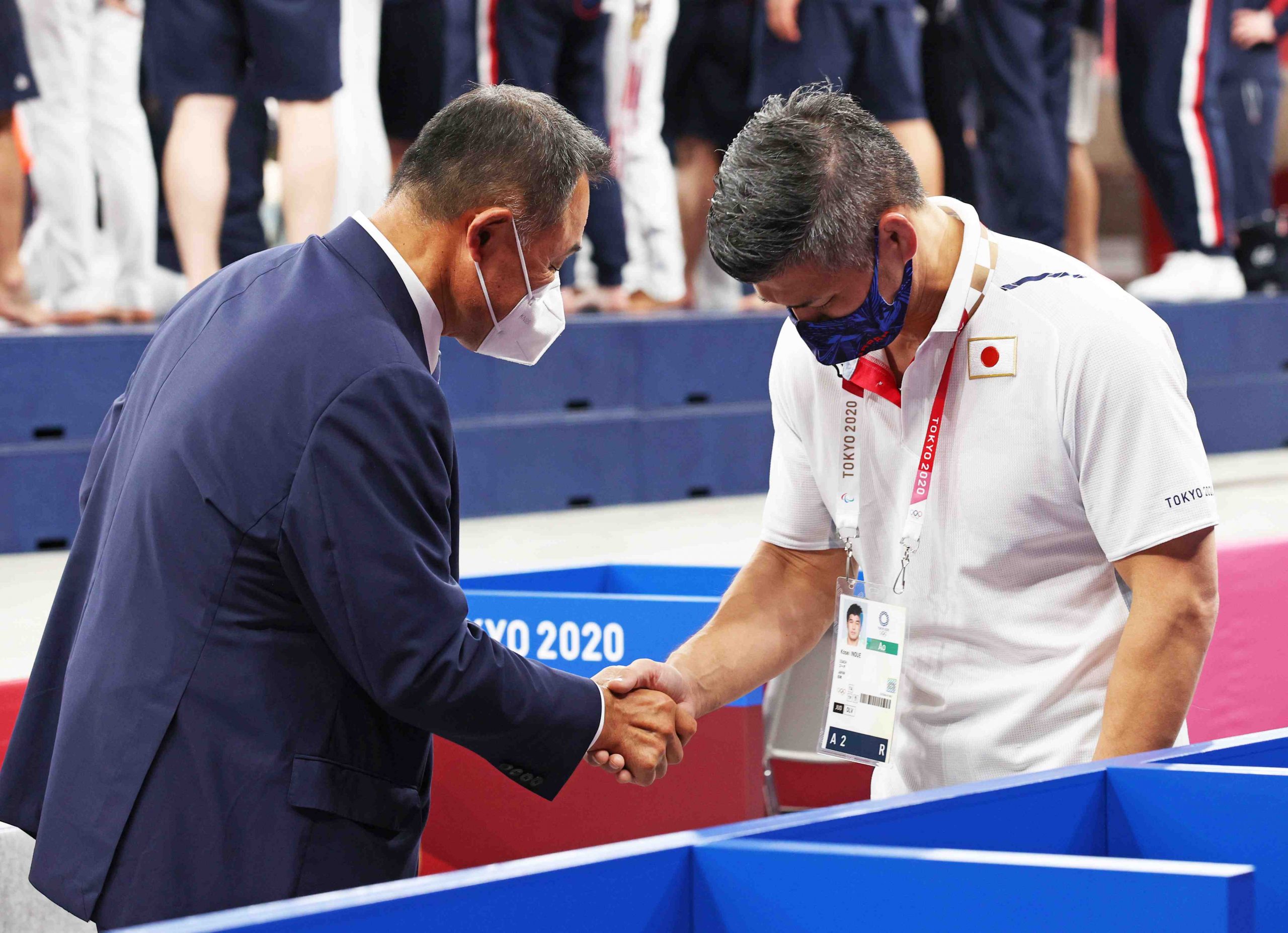 Yasuhiro Yamashita (L), President of the Japanese Olympic Committee and the All Japan Judo Federation, and member of International Olympic Committee executive committee, is greeted by Kosei Inoue, then coach of the men's national judo team, during the Tokyo Olympics..

Greetings to all JAPAN Forward readers.

It’s past mid-November, and the trees are changing color in the Kanto region of Japan where I live. The feeling of late fall is in the air.

We’ve been quite busy this month here in Japan, holding a series of national judo competitions that had been postponed since spring 2021 due to COVID-19.

On September 30, 2021, I stepped down as head coach of the national team, and began a new position at the All Japan Judo Federation on October 1.

One of the roles I will fill in my new position is Vice Chairman of the Strengthening Committee in charge of the combined men’s and women’s judo. My main task will be to use my experience as a coach to support Katsuyuki Masuchi, head coach of the women’s team, and Keiji Suzuki, the newly appointed head coach of the men’s team.

Coach Masuchi is an excellent coach who has been highly praised for helping athletes to develop their unique strengths.

We received messages of support from many people during the Tokyo Olympics, telling us they were given courage and hope watching the athletes who were competing with such passion.

I will do everything I can to support these two coaches and to contribute to the development of Japanese judo, and judo worldwide, in the hope that people around the world can feel this same way at the Paris Olympics.

The other role I will play in my new position is Chair of the Strategy and Branding Committee.

This committee will give me the opportunity to shift my focus from training athletes to promoting and developing the sport of judo. I plan to work on the promotion of digitalization and shine anew a spotlight on the attractiveness of judo.

In the modern era, the environment surrounding sports is changing dramatically.

Urban sports such as skateboarding, cycling (BMX racing) and sport climbing have become more and more popular and were much-discussed during the Tokyo Olympics.

Differing from traditional Olympic events, these sports have a more open and informal atmosphere, making them particularly popular with young people.

We have also seen an explosion in the popularity of esports (electronic sports) worldwide.

In May and June of this year, the IOC hosted its first-ever esports competition, called the Olympic Virtual Series. Also, esports will be an official event at the upcoming 19th Asian Games in Hangzhou, China, in September 2022.

Both the way we enjoy sports and the way we think about them are changing rapidly. I believe judo will have to keep up with these changes.

The objective of practicing judo lies in contributing to society through judo. It is my aim to reexamine the role that judo can play in modern society. I intend to communicate these values of judo throughout the world, while also respecting our traditions and history.

This month’s contribution for readers will be my last for 2021. Although we are still enduring the effects of COVID-19, I hope that the New Year will bring a speedy resolution to the current situation and a renewed sense of vitality in our everyday lives based on a new outlook on the world.

I look forward to your support for the world of judo in 2022.

Kosei Inoue, now in positions at the All Japan Judo Federation, is the former national coach of Japan’s men’s judo team and former Olympic and World judo champion.

Kosei Inoue is an Olympic gold medalist and international figure in judo, serving in key positions at the All Japan Judo Federation since October 1. His term as head national coach of Japan’s men’s judo team expired on September 30, 2021. As an active judoka, Inoue won many international and national tournaments and was Japan’s flag bearer at the 2000 Sydney Olympics. He is president of the nonprofit Judo foundation, JUDOs Inc.