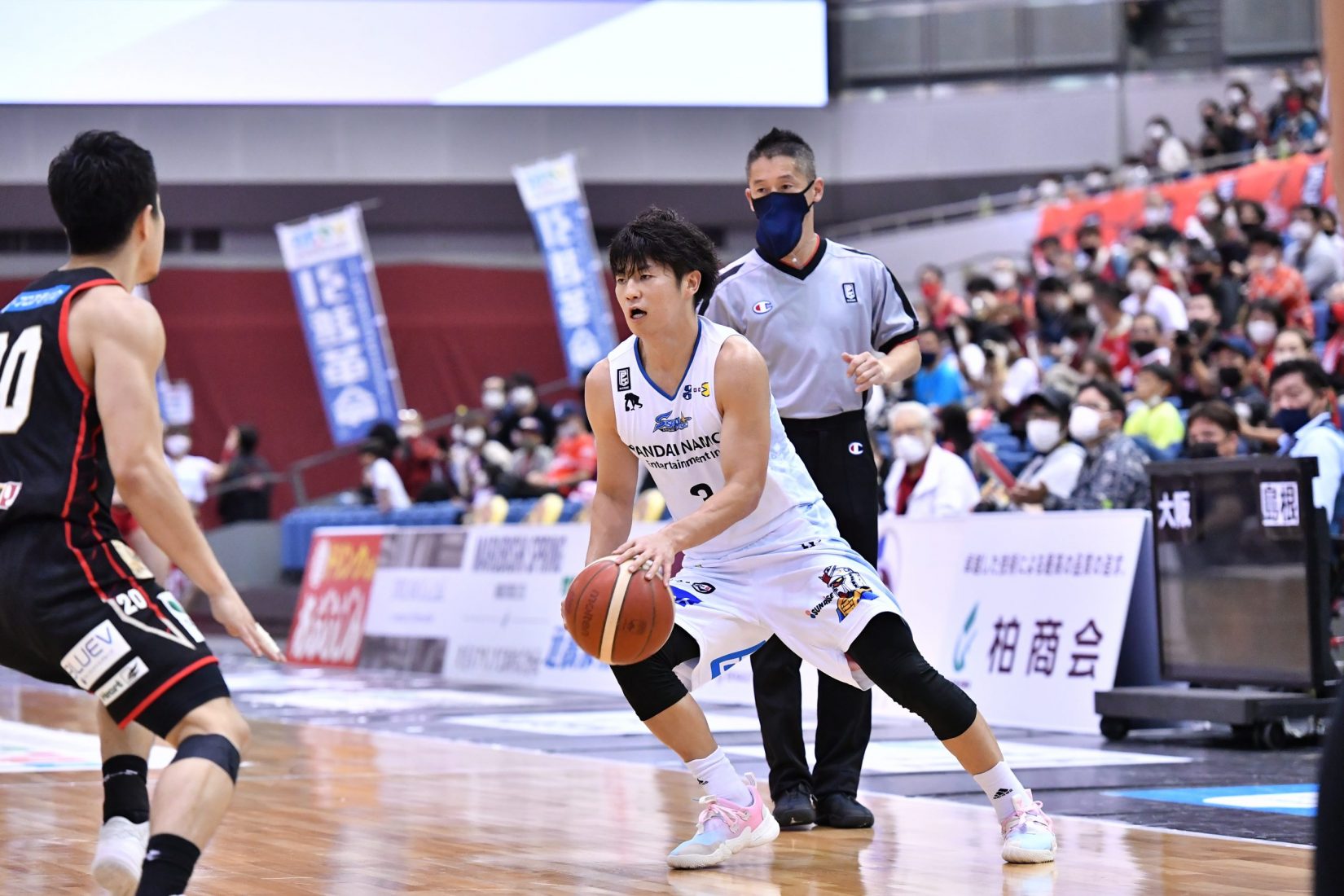 Dozens of newcomers dot the roster of B. League clubs this season.

How quickly players develop on-court chemistry, including newcomers, is an important part of every team’s 2021-22 campaign.

With the B. League taking a pause in the season until December 4 due to the international break for FIBA World Cup qualifiers, it’s a good time to point out how effective and valuable ー Shimane Susanoo Magic newcomer Seiya Ando and Shinshu Brave Warriors offseason acquisition Yuta Okada have been for their teams through 14 games.

In short, Ando and Okada have made irreplaceable contributions for their teams with nearly 25% of the season completed. They have helped the Susanoo Magic (10-4) and Brave Warriors (9-5) position themselves near the top of the West Division, trailing only the first-place Ryukyu Golden Kings (11-3) through games of Sunday, November 14.

Ando, 29, is in the prime of his career, and he’s playing like an All-Star for his new club after moving from the Alvark Tokyo, to the Matsue-based team over the summer.

The Tokyo-born floor leader is averaging 16.9 points per game. What’s more, he is No. 1 in the B. League first division in assists (7.4).

The run-and-gun Shimane offense, put in place by new coach Paul Henare, who hails from New Zealand, relies on Ando to feed the ball to his teammates with regularity, but also make sure there’s an element of surprise for opposing defenders: Will he shoot or will he pass?

Ando has been effective in both roles.

As Susanoo Magic captain, the Sendai University Meisei High School (Rui Hachimura also attended there) and Meiji University alum brings valuable leadership experience to the rebuilding team. Ando was the starting point guard for the Alvark during consecutive championship seasons in 2017-18 and 2018-19.

Clearly, he recognizes how significant each game is, as expressed after Shimane extended its winning streak to four games on November 7.

“The stronger the opponent, the harder it is to win two straight games,” Ando was quoted as saying by The San-in Chuo Shimpo.

Ando is Passionate About Winning

In a March 2018 interview, Alvark coach Luka Pavicevic described how Ando’s hunger to win ignited his team again and again.

“Seiya is the motor of this team,” Pavicevic observed, “but not only in the game but on the practice [court], and sometimes even if he doesn’t recognize how, he wins the game by pure will.”

Watch any Shimane game this season and it’s clear that Ando’s fighting spirit is a vital part of the club’s on-court DNA.

Shimane’s win streak reached six with a series-opening victory over Ando’s ex-team on November 13. Then the Alvark recorded a 64-61 win the next day.

Over the past month and a half, Ando has reminded everyone paying attention to the B. League that he’s capable of producing impressive numbers. Three double-digit assist games to date, including 16 against the Hiroshima Dragonflies on November 6, and 14 versus the Shiga Lakestars on November 10, is a big part of it.

Looking at the overall numbers, Ando isn’t making a lot of mistakes. He has 103 assists and 22 turnovers. In fact, he’s having a terrific season ー and you certainly won’t hear Shimane big man Reid Travis complaining about Ando’s passing skills. Travis leads B1 in scoring (22.8 ppg). Kawasaki Brave Thunders star Nick Fazekas is No. 2 at 22.7).

Those statistics alone certainly grabbed new Japan men’s national team head coach Tom Hovasse’s attention. Ando’s name is among the 25 players on the provisional roster for Japan’s national team training camp in the run-up to 2023 FIBA World Cup qualifiers against China on November 27 and 28 in Sendai.

Okada Performing at a High Level

Also on the list, which was released on Monday, November 15, is Yuta Okada. He is one of four 23-year-olds, the youngest quartet, on the provisional roster.

A seasoned veteran at a very young age, Okada is already playing for his third professional team. The Kyoto native averaged 10.3 points in 40 games for the SeaHorses Mikawa as a rookie in 2018-19 and 7.2 in 33 contests the next season. He joined the Toyama Grouses for the 2020-21 campaign and averaged 9.7 points in 57 games (22 starts).

This season, Okada has started all 12 games that he’s played.

He’s reached double figures in points in every game, and knocked down two or more 3-pointers in all but two matches, including five long-range buckets against the Yokohama B-Corsairs on October 9.

Players and coaches around the B. League have spoken glowingly about the 189-cm Okada’s athleticism, aggressive shooting mindset and physical strength since he entered the league. A potent catch-and-shoot perimeter sniper, Okada also creates off the dribble, changes directions well with the ball in his hands and possesses a nifty mix of spin, step-back and in-the-air moves closer to the basket.

His dozen appearances in the 2021-22 campaign are a vivid example of his potential, but also a snapshot of how good a player he already is.

In recognition of his stellar start to the season, Okada was named the B. League Monthly MVP for October this week.

Okada said he was thrilled to be selected as MVP.

“Thank you for choosing me as the monthly MVP for October by fan voting,” he said in a statement on November 15. “Thanks to my teammates, I think I was able to [have] good play and good stats.

“I will continue to do my best with my teammates to contribute to the victory of the team.”

Okada is the top scoring Japanese player in the B. League, and he plays for a team with a strong veteran nucleus, including Americans Anthony McHenry and Wayne Marshall, both of whom have played in Japan for more than a decade.

The Brave Warriors don’t expect Okada to score 25 points every night. Instead, his contributions blend in with a solid mix of players.

Before the season started, Shinshu head coach Michael Katsuhisa outlined the team’s outlook in an interview with The Asahi Shimbun.

“Because we are confident in our basketball [abilities], we will not change the core part,” Katsuhisa told the newspaper. “Thoroughly do what you think you can control, such as performance, energy, communication and preparation. Play as a team with all your might.”

Like Seiya Ando for Shimane, Yuta Okada is playing with all his might for Shinshu, giving basketball fans something fun to watch whenever these teams are in action.