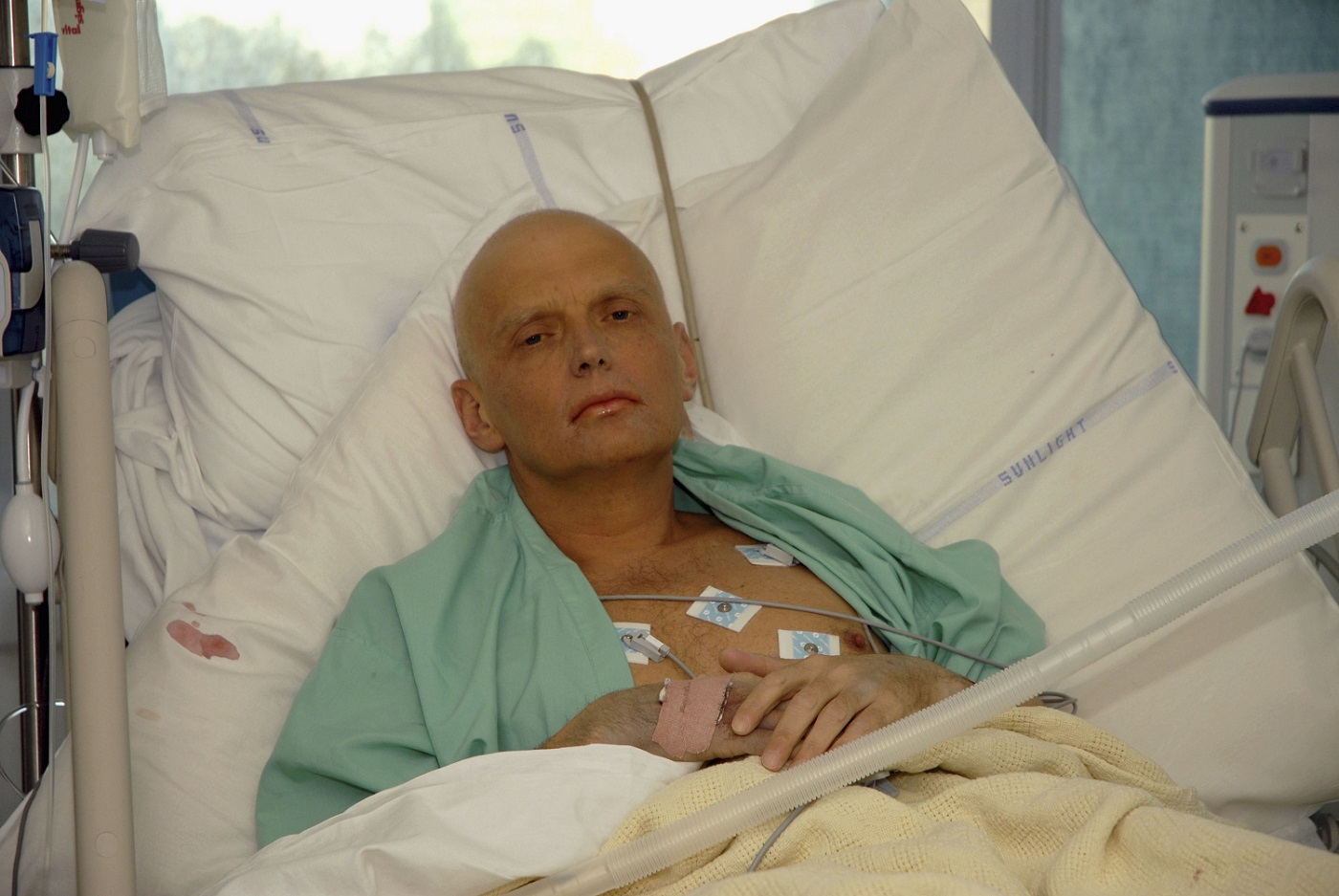 Above: Alexander Litvinenko (1962-2006) was a former Russian spy who was poisoned in London with the highly radioactive substance polonium 210.

The use of State terror on a massive scale to exterminate or silence opponents, employed to deadly effect by both Joseph Stalin and Adolph Hitler, remains very much a weapon of choice for today’s dictatorships.

That same day marked the 14th anniversary of the assassination of Anna Stepanovna Politkovskaya, a fearless reporter for the newspaper Novaya Gazeta who had earned a reputation by exposing atrocities committed by the Russian government in Chechnya as part of Putin regime’s strategy for ethnic genocide. Politkovskaya was gunned down in broad daylight in front of her Moscow apartment, apparently by hired killers. She was 48.

Who her actual murderers were or who contracted for her killing remains unknown to this day. 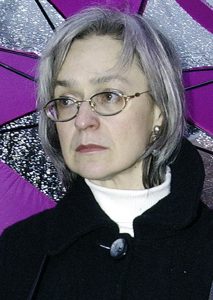 In his book about the case, The Assassination State of Russia (in Japanese, 2016, Shinchosha publishers), author Masami Fukuda writes: “Some sources say that it was done by individuals seeking to please Putin or at their orders. These individuals would have considered it the best possible present they could give Putin for his birthday.”

Recently there was the international uproar surrounding the case of Alexei Navalny (44), leader of the “anti-Putin” political forces, who on August 20 was poisoned with a Novichok nerve agent chemical weapon and lapsed into unconsciousness. He was medivacked to Germany for emergency medical treatment and survived the assassination attempt. Navalny’s ordeal brought to my mind images of the dignified bearing of Politkovskaya, who I had the opportunity to meet once in Moscow. 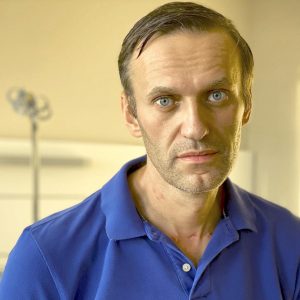 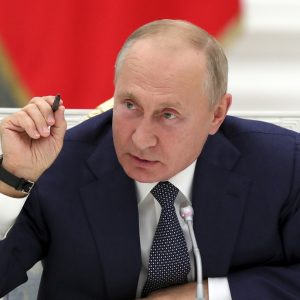 Crushing of Chechen People Created an Abyss of Suffering

The darkness that enveloped Chechnya was dark indeed. After the breakup of the Soviet Union, the Russian military in 1994 and 1999 launched full-scale invasions in order to prevent the establishment of an independent Chechnyan republic in the North Caucasus. These military assaults were accompanied by kidnappings, torture, murder and other atrocities on a massive scale, affecting an estimated 100,000 victims.

Prior to the second invasion which crushed the fledgling Chechnyan state, a string of mysterious explosions devastated apartment blocks in Moscow and other cities, resulting in around 300 deaths. The Russian authorities labeled these series of incidents “Chechen terror” and declared a war of retribution. Victory in that conflict furnished the vehicle that Vladimir Putin, a former KGB lieutenant colonel, rode to power.

That brings to mind the case of Alexander Litvinenko, a former FSB lieutenant colonel, who defected to the West. Litvinenko made the sensational charge that the FSB was actually involved in the bombings and other incidents for which the Chechens were blamed. In other words, they were “false flag” attacks. Litvinenko also charged that the KGB and FSB had supported terrorists worldwide.

The outspoken defector was silenced forever after being poisoned in London with the highly radioactive substance polonium 210. Alexander Litvinenko was 44 at the time.

Now we have the timely 2019 release of the movie “Mr. Jones”—a biopic directed by the Polish filmmaker Agnieszka Holland.

Gareth Jones was the Welsh freelance newspaperman who was the first to inform the outside world of Stalin’s widespread famine-genocide in the Ukraine during 1932-33. This man made tragedy is known in Ukrainian as the “Holodomor.”

Although Ukraine was the incredibly fertile breadbasket of the Soviet Union, Stalin was determined to exterminate the kulaks (rich peasant class) in order to achieve the collectivization of agriculture.

Jones, who had already made a name for himself by securing a one-on-one interview with Hitler shortly after he had become chancellor of Germany, heard about the famine while on a trip to the Soviet Union. Although foreign reporters were banned from visiting the region, he secretly hopped a freight train that took him to the Ukraine, where truly hellish scenes awaited him.

In articles he wrote after leaving the Soviet Union, Jones exposed the Soviet crimes in the Ukraine that are estimated to have resulted in more than three million deaths by starvation. Some historians even have labeled Moscow’s policies as “terror by starvation.”

After slipping the surveillance net in Moscow in March 1933 and arriving in the town of Stalino (now Donetsk) in the eastern Ukraine, Jones became an eye witness to “horrible scenes.” Empty villages, enforced grain collection, crowds of starving people, even cannibalism among families.

Eventually, the Soviet secret police caught up with Jones and expelled him to the United Kingdom. But the articles he wrote, the first reports in the West on the Soviet equivalent of Hitler’s holocaust, received widespread play in the English-language press around the world. 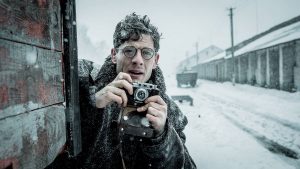 Jones, who was a gifted linguist, was also interested in East Asia. He spent a brief time in Japan in 1934 before heading to Manchuria to report on the situation there. He died there, apparently as the result of multiple shots to the head on August 12, 1934—one day before he would have turned 30 years old.

The circumstances of Jones’ death are murky. He and a German journalist he was traveling with had been captured by Chinese bandits. Jones was passed from one group of bandits to another. The second group did the killing, although evidence strongly suggests that it was instigated by NKVD (forerunner of the KGB) secret police.

That would have been in line with Stalin’s modus operandi of hunting down across the face of the earth anyone with the temerity to expose the darkness of his dictatorial regime. Five years later saw the sensational murder of Leon Trotsky—Stalin’s main rival in the ranks of the Bolsheviks—in Mexico by an assassin sent by Moscow. 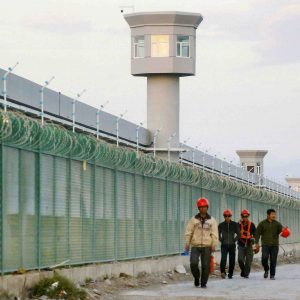 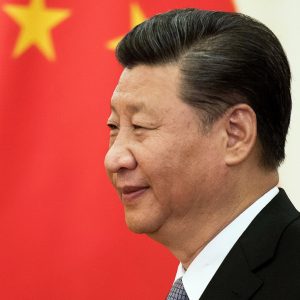 Dictators today continue to take Stalin as a model. For example, Putin famously once said, “We’ll drive the terrorists into an outhouse and waste them there!”

The “red darkness” that Stalin introduced continues to hang over Putin’s Russia. Stalin’s legacy (or that of Mao Zedong for that matter) has continued in a straight line to today’s China. That is a legacy of State terror designed to suppress ethnic cultures.

Xi Jinping’s regime is determined to root out the languages, religions, customs, and other aspects of culture of the Uyghurs and other minorities. The Beijing authorities shamelessly laud “cultural assimilation”—in other words “introduction of the collective consciousness of the Chinese race”—even as they go about expanding concentration camps.

Andrii Gurenko, a Ukrainian expert on international affairs who currently resides in Osaka, warns: “Russia and China share the same values of aggression, expansionism, human rights violations and terror politics. Neither basically has any qualms about killing people.”

One the one hand, the administration of U.S. President Donald Trump has embarked on the path of “all-out confrontation” with China. On the other, by engineering revision to China’s constitution, Xi Jinping has paved the way to becoming dictator for life.

Perhaps that is because Xi fears if he was to leave his exalted perch, the ghosts of the many dead, both famous and unknown, who have been the victims of Communist oppression and disappeared into the “red darkness” will come looking for him.

I doubt that President Xi sleeps all that well.

(Read the essay here, in its original Japanese.)