Maria Ressa: ‘We Hold Power to Account — That’s the Reason We Were Singled Out’ 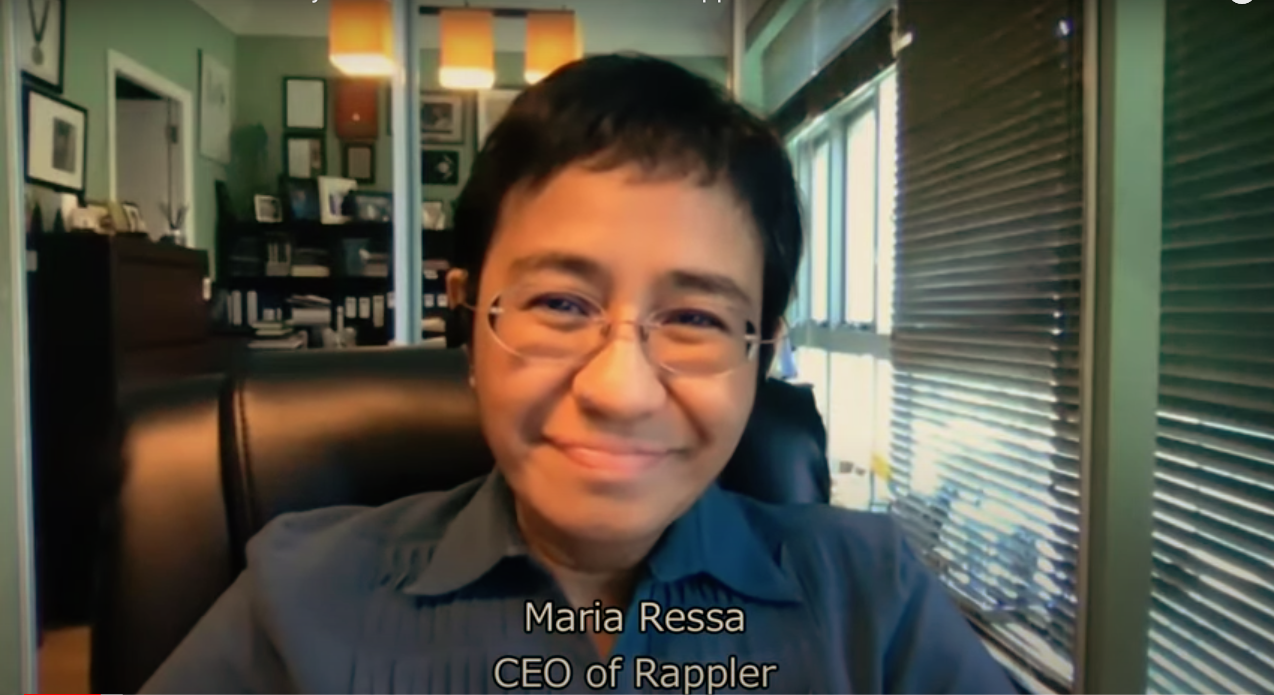 For reporters around the world, it was hard to miss the news that Maria Ressa, founder and CEO of Rappler, a Philippine news site, was convicted for cyber libel on June 15.

She and former Rappler researcher Reynaldo Santos Jr. were sentenced by a Manila court to up to six years in prison for an article that was published in 2012 before the country’s Cybercrime Law was even enacted.

Ressa and Rappler say that the case is part of a campaign of systematic pressure against the free press by the Philippines government, led by President Rodrigo Duterte.

For foreign audiences, it could be tempting to dismiss this story as an inspiring yet isolated case of media repression particular to the context of a far away island country, the Philippines.

However, in an online press conference sponsored by the Foreign Correspondents’ Club of Japan on Monday, June 22, Ressa made it clear that the problem arose because “Rappler holds power to account, and that is the reason we were singled out.”

It was, she said, a problem not just of freedom of the press in the Philippines, but a threat to democracy itself.

Chipping Away at Press Freedom in the Philippines

An award-winning investigative journalist with previous experience at CNN in Southeast Asia, Ressa recounted that she had seen a variety of countries in their walks towards democracy, and expressed deep concern about the direction the Philippines was heading.

The current case goes back to a 2012 article written by Rappler researcher Reynaldo Santos Jr. Reporting on a well-publicized impeachment case against the chief justice of the Philippine Supreme Court, Santos looked into the justice’s association with Wilfredo Keng, a businessman in the luxury car business allegedly suspected of involvement in illegal activities.

Founded in 2012, the same year the article in question was published, with just four editors, 12 journalists, and a commitment to investigative journalism, the start-up media Rappler immediately made a reputation for holding the government accountable.

Following Duterte’s assumption of office in 2016, Rappler’s reporting brought to light the extrajudicial killings linked to the government’s war on drugs, and further provoked government ire.

Soon after, in 2017, the businessman who appeared in the initial corruption article, Wilfredo Keng, pressed criminal charges for libel against Ressa and Santos under the Revised Penal Code and the Cybercrime Law. It was five years after the 2012 date publication of the article.

Normally, the statute of limitations for libel is only a year, but the Philippine government decided to prosecute the case, citing an obscure law that it said should extend the period to 12 years.

There was also a question of whether the article was subject to the Cybercrime Law, which was not enacted until four months after the article was published. However, the government argued that a typographical correction made in 2014 brought the entire article under the scope of the law.

Ressa and her legal team see the case as a deliberate effort by the Duterte government to weaponize the law. The case should never have been prosecuted. In fact, a panel of government investigators had thrown out the case in the first instance, precisely because it was outside the time covered by the new law. Their higher-ups in the Department of Justice picked up the complaint again and came up with the interpretation that cyber libel can be prosecuted within 12 years of publication of the supposedly damaging material.

Since the court handed down the conviction on June 15, Ressa and Santos have posted bail. She says she remains hopeful that she can still bring the case to justice by appealing the case.

Not the Only Attack on Free Press

The Rappler decision comes as other media in the Philippines also find themselves under government pressure. Earlier this year, the largest broadcasting network in the country, ABS-CBN, went dark after a government order to desist.

The President claimed the network failed to air his campaign advertisements and had reported on him unfavorably in 2016. He had since vowed to make sure the government would not renew the network’s franchise. Following the expiration of its franchise in May, the station was told to stop TV and radio operations. It is an “alarming” development, which Ressa says has led to the network losing “30 million pesos a day” (almost $600,000 USD).

The country is now poised to pass an anti-terror bill, which Ressa described this way:

This bill will allow a small group to essentially designate any [government] critic as a terrorist. Once they do that, you can be arrested without a warrant, and detained for up to 24 days. This is very alarming. And in that context, the verdict that we received last Monday, a week ago today, takes on greater proportion. This isn't just about freedom of the press, this is about freedom of democracy.

For Rappler, too, government pressure is not limited to the current case. It is just one of eight criminal cases being brought against Ressa and Rappler that included tax evasion, in a series of charges which started accumulating in 2018.

Ressa explained the government strategy by pointing to the tax case:

The tax evasion [case] is funny because the first charges came six months after the government gave us an award as top corporate taxpayer. [It's like] it doesn't matter what happened before, this is what the government says.

Nor, she warned, is the threat limited to the Philippines. She called on the Japanese audience to be cautious, pointing to the phenomenon of social media and its role in helping spreading disinformation as a problem we all have in common.

In terms of Japan…if you are on social media, you will have the same excesses that we are dealing with today.

A Cautionary Tale for the Rest of the World

Ressa has lived and studied in the United States, and holds citizenship in the U.S. and Philippines. Given her experience in both places, she was able to draw some parallels with journalism in the U.S.

Of particular concern is the recent phenomenon of SNS, which uses its mechanisms of immediate communications to chip away at the truth, because they have taken over the journalists’ role as gatekeepers of news. Ressa analyzed it this way:

Facebook is the world’s largest distributor of news. And when you strip away the gatekeeping role [from journalists] but abdicate responsibility, you get this ecosystem where a lie laced with anger and hate spreads faster than facts. Facts are really boring, we know this as journalists. We spend our careers learning how to make riveting stories, so that people will care. Imagine that you don’t have to tell the truth anymore.

She went on to explain how the damage doesn’t stop there. Once a divisive narrative is created, fact checking is not effective anymore. Many will refuse to believe the truth because of their cognitive bias.

The Rappler founder then presented a concrete example from the U.S. of how social media can be deliberately used to drive divisions in society.

The Muller report actually documented that Russian misinformation networks targeted Americans in the 2016 campaigns, and the U.S. Senate Intelligence Committee released the data that the Internet Research Agency (IRA) worked hand in hand with the Russian Military Intelligence [also known as GRU] to pound a fraction of the society line open. What is that? That is Black Lives Matter. So you fast forward four years and you see it. It is, like in the Philippines, death by a thousand cuts. Instead of healing divisions, social media allows you to pound it, pound it, until it splits wide open.

Ressa is still facing death threats, and Rappler has had to increase security following an episode in February 2019 when a pro-Duterte live stream incited people to come to the company premises, with calls to “shoot them dead.”

I increased security six times. It's there, but you can’t let a Damocles sword decide how you are going to act. It's important that you swat it away and keep going, but putting in place the safeguards that are necessary at the time.

At the same time, she has far more backup than before. The company, which has embraced technology, now employs 100 people, has almost 5 million followers on Facebook, and competes with broadcast networks established for decades.

Regarding more concrete political support from abroad, Ressa made a half-hearted joke that if she asked for support, the government might sue her once more.

A government agency had ordered Rappler’s business registration revoked in 2018, saying that it violated the prohibition in the Philippine Constitution of foreign ownership of mass media. A court had ordered the agency to review its decision.

She said during the June 22 press conference:

I have been a little overwhelmed by the support we have gotten all around the world, I think partly because they see shadows of themselves through us. Yes, absolutely, I would welcome [political support from Japan], but I wonder if even saying that could even be grounds for the government to file another case against me.

After a hollow laugh, she reminded listeners that she was fighting for “basic rights enshrined in our Constitution.”

Preferring fighting back with information, Ressa revealed the upcoming release of A Thousand Cuts, a documentary by film director Ramona S. Diaz, who shadowed the Rappler newsroom for more than a year. For those who prefer providing direct assistance, Rappler also has a crowdfunding page to help cover their legal costs and support investigative journalism.