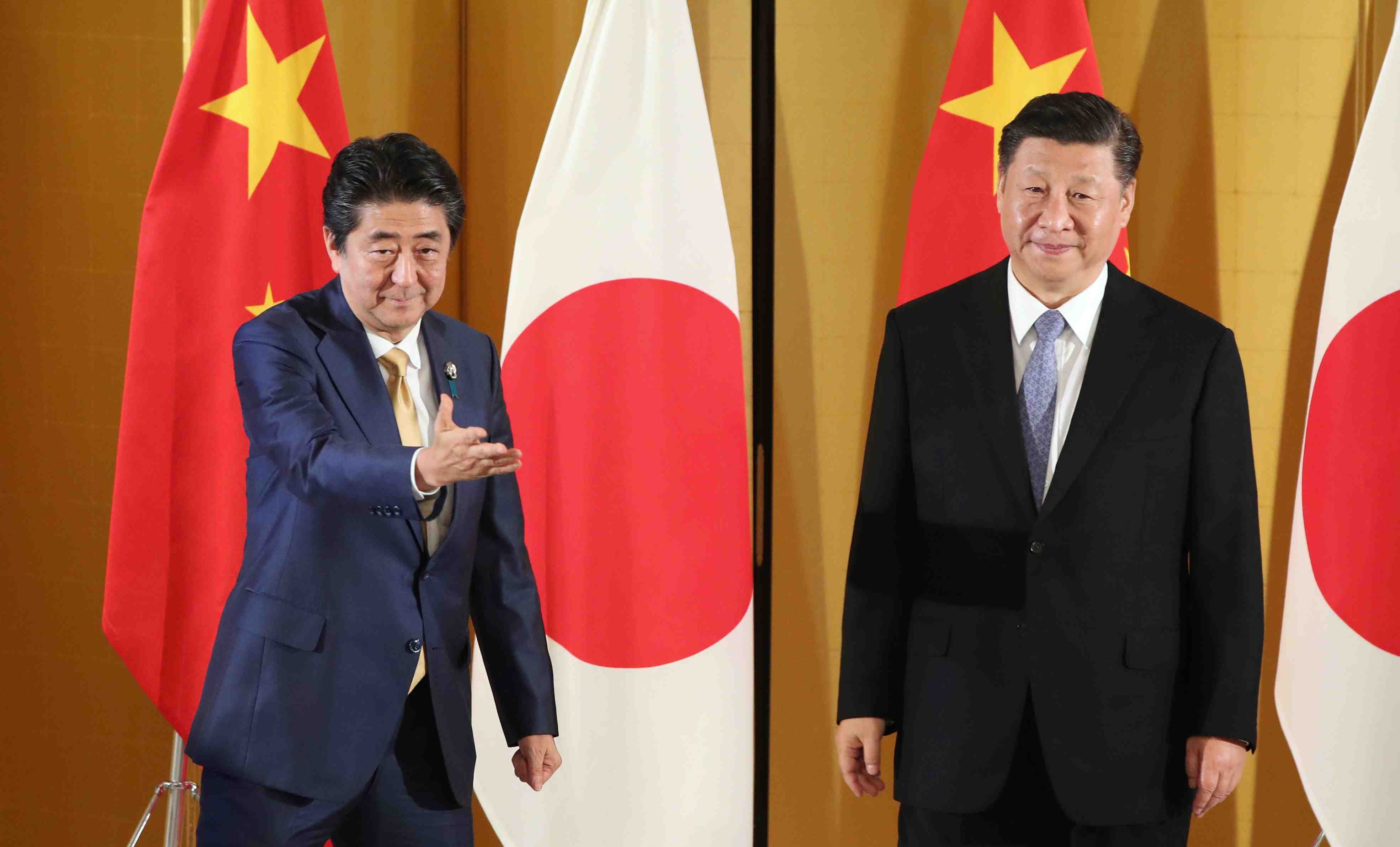 The outbreak of the COVID-19 pandemic has precipitated a decoupling movement, as states try to disentangle their supply chains and political commitments from an increasingly risk-heavy relationship with an increasingly belligerent China.

Just a few months ago, Japanese Prime Minister Shinzō Abe was under fire for having extended a pre-Olympic olive branch to Chinese President Xi Jinping in the form of an invitation to come to Japan as a “state guest” (kokuhin). Now, with the pretense of the Olympics obviated, Japan can go about de-Sinifying its economy in earnest.

Japan is faced with the delicate task of extricating itself from the embrace of a giant which put itself in global control of things such as AI, pharmaceuticals, and rare-earth metals. But China has already been outfoxed on the rare-earth front, with Waseda University researchers having discovered a trove of the vital metals near Minami-Torishima in 2018. There are signs that Japan can do well without China in other areas, too. The coronavirus outbreak will only accelerate what has already been an ongoing process.

The Strange Case of Japanese Exceptionalism

Via the ill-fated Diamond Princess cruise ship, Japan was one of the first places where the COVID-19 outbreak spread beyond the People’s Republic of China. I am a longtime Japan resident, and viewed the news about the Diamond Princess and other emerging cases with alarm.

There were days when it seemed inevitable that we would go the way of Italy, Spain, or New York, slipping into the abyss of exploding coronavirus victims and mounting casualty lists. But it didn’t happen. Japanese exceptionalism slid into home base, while American exceptionalism was striking out. That is the biggest story out of Japan in 2020.

Where Are All the Chinese Tourists?

One of the most noticeable things about pandemic-stricken Japan was the eerie absence of Chinese tourists after the end of the Lunar New Year holiday. Op-ed writers in Kyoto noticed how empty the streets were there. The winding pathways leading up to Kiyomizudera, for example — normally choked with Chinese tourists in rented kimonos — were strangely desolate.

The Asakusa Shrine in downtown Tokyo, a mecca for Chinese visitors looking for an Instagrammable photo and some suitcase-stuffer souvenirs, were virtually deserted, too, stores shuttered and restaurants closed. The tour buses, the pastry shops, the high-end boutiques, the Hello Kitty pop-ups, the electronics supercenters took a tremendous hit as millions of mainlanders have stayed home.

What Will the Consequences Be?

In the Sankei newspaper I read an op-ed by Shigeru Kashima, a French literature specialist and cultural critic, who predicts that Japan will enter a period of “sakoku” or national isolation due to the “civilizational turning point” of the coronavirus outbreak. Kashima hinges his argument on what he sees as underlying differences between Japan and the rest of the world.

In Japan, Kashima says, a lockdown would be impossible to pull off. The country is too connected, the rail networks too concentrated and efficient. So, Kashima asserts, Japan will instead go through a nationwide lockdown of sorts, a turning inward to the national economy in which the “system of acquisitiveness” will come to an end.

Translation: it won’t be just the Chinese who no longer buy stuff in Japan. Kashima says we are going to be bidding farewell to the consumerism of the past two generations.

If we enter into a period of sakoku, we will have no choice but to return to the economic system of the Edo period, Kashima says. Japan’s population is decreasing, and the 75 years of postwar wealth propped up by trade and the world economy will be lost. There is a high chance that the economic system of elective consumption premised on the appetitive way we have known until now will come to a close.

There are others voicing similar sentiments. Mountain climber Ken Noguchi, for example, has been emphasizing the “Japanese way” of appealing to moral sentiment rather than armed force as a path forward for Japan. After organizing the removal of trash from the mountains he has summited around the world — tons of trash have been hauled out from Mt. Everest, for example, thanks to Noguchi’s efforts ― he is renewing talk of doing the same for Mt. Fuji.

His environmental-mindedness strikes a deep chord in a country instilled with Shintoism, where living in peace with nature is the very soul of Japan. Disillusionment with the ever-more-Sinocentric globalist paradigm seems to be awakening a remembrance of a time long before Japan got caught up in empires, mass production, and the environmental degradation that results.

This emphasis on the “Japanese way” carries over into constitutional reform, although it is likely that self-reliance will mean, paradoxically, increased bilateral military strategizing with the United States. Prime Minister Abe has made revision of Article 9 of the Constitution — imposed by the American occupation forces in the immediate postwar period, which prohibits the maintenance of a military force — the lodestar of his political career.

As Japan rearms, it will only strengthen its alliance with the United States. Decoupling from China will mean taking a full-fledged place carrying the collective-security o-mikoshi with the U.S., but this will be a much easier sell than ongoing engagement with the PRC.

The Japanese public, long averse to having a strong military of its own, has in recent years undergone a sea change in opinion, with more now supporting the idea of recognizing Japan’s “land, sea, and air forces” as a legitimate military force for the country’s defense.

And the “Okinawa problem” has been largely sidelined in national discourse, thanks to ongoing exposés of the real problem. As former United States Marine Corps civilian Deputy Assistant Chief of Staff in Okinawa Dr. Robert D. Eldridge has long pointed out, the Okinawa “base controversy” is largely the work of radical leftwing activists — many of them working under the auspices of the PRC’s United Front — and is, ironically, not really a local Okinawa issue at all.

The Costs of Reform

If constitutional revision does pass before the end of Prime Minister Abe’s final term, then there will likely be a sizable increase in spending on military hardware and personnel. These will layer on top of trillions of dollars in coronavirus stimulus monies which the central government is providing, the inevitable economic fallout caused by businesses closing down permanently due to the loss of Chinese tourism, the washout of the 2020 Olympics, and, perhaps most of all, the rejiggering of the Japanese economy.

The Abe administration is proposing economic assistance to firms which relocate out of China, and while this will mean the return of manufacturing and engineering jobs to Japan, it will also mean the end of cheap goods from China. This could upend and lead to a fundamental rethink of how the Japanese economy works.

Take the hundred-yen shop. This convenient staple of the Japanese commercial sector has become both a dodo and a millstone, which should have been cut loose long ago. The boatloads of plastic kitsch that it takes to maintain a profit margin at flatlined prices (the hundred-yen shop has been charging a hundred yen for more than 20 years now), and the indirect blow to the Japanese economy from trading manufacturing jobs for endless rows of multicolored file folders and injection-molded drinking cups, are now revealed as having been completely unsustainable. Something’s got to give.

If retail giants like this go belly up, it will sting badly. The tax base will surely improve as Japan decouples from China, but the short-term pain is likely to be crippling. All of the capital and personnel tied up in the China-reliant economy will have to be re-sorted.

As the economy shifts to a sounder, more local footing, the shake-out will probably mean longer unemployment lines and even more quantitative easing by the Bank of Japan. Sakoku was a time of great peace and gently rising prosperity, but we should remember that it came only after a long period of civil war.

Medievalism of the Future

Kashima’s prophecy of Japan’s returning to what he calls “medieval times” might not be such a bad thing. The technological innovations of modernity will not disappear. Japan is not going to become North Korea. The lights will stay on, the trains will run, the banks and post offices will go on as before. Kids will send text messages to their friends; adults will order juicers and paperbacks on Amazon.

But, in decoupling from China, Japan may finally find itself again. The postwar era has been a season of frenzied labor, wild excesses, speculation, and, now, more than 20 years of doldrums and sighs. A more stable Japan, built more on the old ways while embracing what is best of the new, would be the best thing that could happen to East Asia.

Dr. Jason Morgan is a professor at Reitaku University in Chiba Prefecture and the author of numerous articles and books in Japanese and English, including Law and Society in Imperial Japan (Cambria Press, 2020).