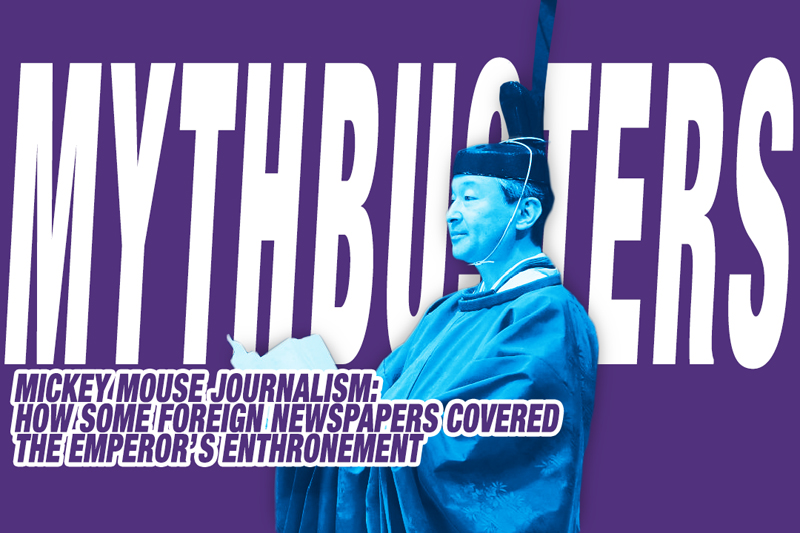 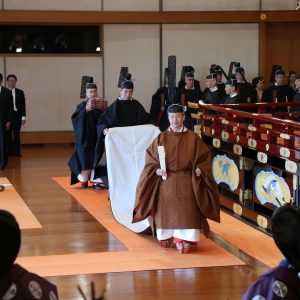 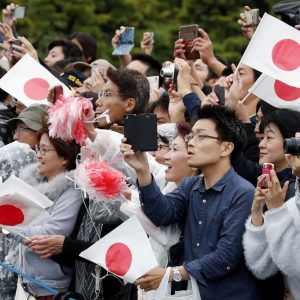 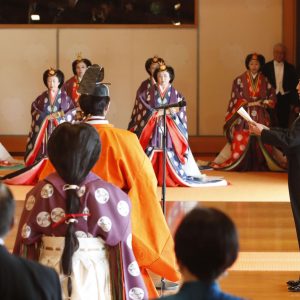 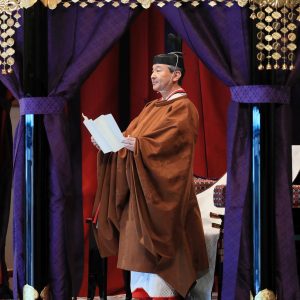 Emperor’s Remarks to His People and the World on Enthronement 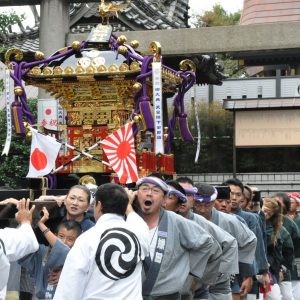 In the United States and the United Kingdom, “Mickey Mouse” is used to mean something trivial, insignificant, or senseless. While foreign media coverage of the enthronement of Emperor Naruhito was generally positive, several prominent journalists engaged in gratuitous Mickey Mouse journalism.

In an article published on October 22, Motoko Rich, the New York Times Tokyo bureau chief, described the costume worn by the Empress, saying: “Masako wore a multilayered kimono, in a design that dates to the 10th century and is known as itsutsuginu karaginu mo. The layers of cloth weighed close to 35 pounds. She also wore a wig in an elaborate hairstyle that looked like stiff wings or large Mickey Mouse ears growing from the side of her head (emphasis added).”

This singularly poor, even insulting, choice of words was spotted by Japanese readers and became a subject for much adverse comment on Twitter. As of this writing (October 28), Rich has made no response to this criticism — most probably because she cannot read or write Japanese, although some of her many critics have also written in English.

At other points the writing was snarky and puerile. Seemingly perplexed by the fact that the Emperor had declared his ascension earlier, Rich described the Tuesday ceremony as giving him a chance to “sit on a really big throne.”  The headline was also snarky: “Naruhito’s Enthronement: Hasn’t Japan Done This Already?” It too was criticized by Japanese on Twitter.

In writing about the costume worn by the Emperor, Rich felt obliged to take another potshot, saying: “Naruhito appeared in a silk orange robe and a crown. Some reports say the robe was dyed with the juice of sumac berries, but others say it was merely a chemical dye.”

Later, she wrote, “But That’s Not All Now, things get really interesting,” to describe a portion of the ceremony where, by her description, the Emperor may or may not have “a conjugal visit with the sun goddess.”

The wording here and throughout the New York Times article made me feel I was reading something by an American teenager, not a veteran journalist.

Other points noted by Rich — such as the cost of the ceremony or the use of public money for what a very small number of Japanese see as constitutionally prohibited support of a religious ceremony — have some merit. But in the context of this article, they seem to be flippant asides, intended to detract from the occasion rather than to enhance understanding.

In her conclusion, as is common on the part of foreign journalists, Rich raises the issue of female succession to solve the issue of a lack of male successors, even though there is no evidence whatsoever that any of the women in the royal family want to be emperor. She also ignores the fact that more male heirs to the throne would be available if succession rules were broadened, as they had existed historically. This is something that is now being considered.

Richard Lloyd-Parry Bothered by the Silence

While the Rich article strikes me as puerile, an article by Richard Lloyd-Parry (RLP) in The Times of London leaves the impression of something deliberately intended to be nasty.

The article begins with the assertion that the Emperor’s “mother and his wife have suffered mental breakdowns,” and then goes on to complain that the ceremony was “unleavened by personality or emotion.” According to Parry, the “emperor, empress, courtiers — moved like mannequins through a chamber arrayed like a stage set…. [T]he people wrapped in silk might have been puppets.”

While most other coverage accepted this one segment of the enthronement process as something distinctively Japanese, Parry seems disappointed that it was not more like a British coronation. He was particularly bothered by the silence. “The strangest thing of all was the absence of sound in the Imperial Palace — not only of music but, for most of the proceedings, human voices.”

Later in the article, he writes, “Japan has ancient and exquisite traditions of music and performance which could, at some point, have been incorporated into such ceremonies.”

This statement demonstrates clearly that RLP was focused on belittling the event rather than reporting it. That gagaku (ancient court music) would be performed during the state banquet for foreign guests was announced in both Japanese and English media.

Although to this reader he had expended more than enough snark up to this point, RLP apparently felt that something more was needed for a conclusion. This is what he wrote:

But this was a ceremony in which symbolism won out over everything else, and which offered no grounds for happiness to those watching, even the invited VIPs. At one point, Prince Charles could be seen scrutinizing what appeared to be an order of service. He must have been wondering why he bothered to fly out for this.

Foreign correspondents in Japan generally have a very high opinion of themselves. They frequently praise each other’s singular capabilities and writing via social media and the Number 1 Shimbun, the house organ of the Foreign Correspondents Club Japan, but as far as I can recall, RLP is the only one to have claimed that he could read the mind of a visiting foreign dignitary.

For nearly two decades I taught a course entitled “Japan in the Foreign Imagination.” In so doing, I came to feel that much English language reporting on Japan had the covert (and sometimes overt) intent of reassuring foreign readers of their superiority to the Japanese. Although I retired in 2017, these two articles would be required reading if I were still teaching this course.

I would also be asking students to consider these two articles in terms of Hanlon’s razor, a cynical aphorism that states, “Never attribute to malice that which is adequately explained by stupidity.”

From my perspective, RLP is easy to place. This article and others he has written show clear malice, including his recent piece on the UK Army rugby team visiting Yasukuni Shrine.

Motoko Rich seems more toward the stupidity side of Hanlon’s spectrum. As with other New York Times bureau chiefs, she was simply rotated into Japan on the Buggin’s turn system that it uses to assign foreign correspondents to posts.

Despite having a Japanese mother and spending a few years in an elementary school in Japan (an “international” school), she has admitted to only the most rudimentary knowledge of spoken Japanese and is clearly illiterate when it comes to the written language.

Without exploiting Japanese assistants, mostly women, in a distinctly neo-colonial fashion, New York Times correspondents and those of the Washington Post, which has a similar rotation system, simply cannot function in Japan. That they are stupid or clueless does not absolve them of responsibility for what appears under their names, even if Japanese assistants have done all the real work.

Whatever the personal motivation of Motoko Rich and Richard Lloyd-Parry, whichever side they may fall on the Hanlon spectrum, Japanese companies should be asking whether The New York Times or The Times of London are good venues for advertising the goods and services they offer. Readers who find appealing articles such as the two taken up here are probably not good customer prospects.

The Japanese public at large should be asking whether foreign newspapers that send illiterates to cover Japan and other non-English speaking countries are to be taken seriously.