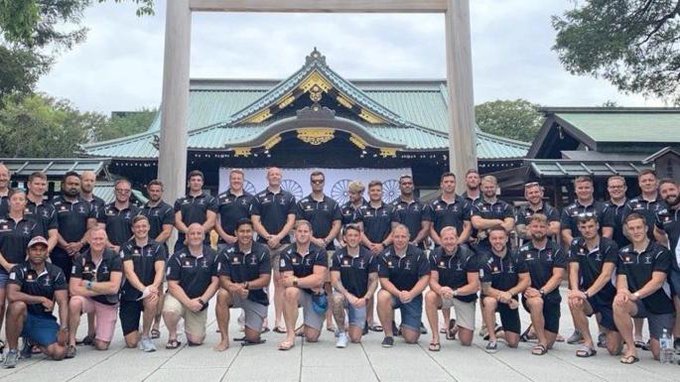 On Wednesday, September 18, The Times of London carried one of the most blatantly racist articles I have seen about Japan, and I have seen many. The article was headlined “UK military rugby team visit shrine for war criminals in Japan” and was written by Richard Lloyd Parry, the longstanding Times correspondent in Japan.

The claim that the Yasukuni shrine is “for war criminals” is utterly bogus. Numerous Twitter users spotted this absurd claim, noting that the Yasukuni Shrine was founded in 1869 to commemorate those who died in the Boshin War of 1868-1869, an entirely domestic war, and one that was fought before the concept of war criminals even existed.

While it is true that the shrine register (it is not a cemetery as is often asserted) contains the names of 14 Japanese men executed as “Class A war criminals,” these 14 constitute 0.0006% of those souls registered at the shrine.

The others include Japanese and non-Japanese, women, and civilians. Some on the registry are European.

As Gearoid Reidy of Bloomberg remarked in a public tweet, “[T]his headline calling it a ‘shrine for war criminals’ is an unhelpful mischaracterization. If The Times is read (as I’m sure it must be) by a handful of murderers, would you call it a ‘paper for murderers’?”

The September 18 article goes on to assert that the rugby squad was “dressed down by Paul Madden, British ambassador to Tokyo” and “The ambassador had a word or two, so we’ve been told not to visit any more shrines, just in case.”

Various Japanese newspapers, including The Sankei Shimbun, reported on The Times article on this point. It was, in contemporary jargon, fake news.

The British Ambassador has not instructed anyone not to visit any Japanese shrines. Indeed he accompanied the British Trade Minister to Meiji Jingu shrine this morning and has taken many British Ministers to various Japanese shrines. The UK respects Japan’s traditions and religions. We expect many British visitors who are here for the Rugby World Cup to enjoy visiting shrines and many other aspects of Japanese culture. The British government fully understands the sensitivities around visits to Yasukuni Shrine.

In this context, it should be noted that the Meiji Shrine itself is controversial because some see it as part of the notion of emperors as deities.

The article continues by saying that Yasukuni “is a shrine to jingoism and lies, an incubator for the kind of aggressive nationalism which still sends shivers through Japan’s former colonial subjects in Korea and China.”

Here the jingoism and lies are on the British side.

I have visited Yasukuni Shrine and the Yushukan museum on numerous occasions, most recently a few weeks ago. As an historian specializing on Japanese society between the first and second world wars, I read the Japanese language explanations for exhibits covering that period particularly carefully.

I saw no lies. As with war museums in general, including the five Imperial War Museums in Britain, the narrative is skewed by omission, not by lies.

And while the British museums celebrate imperialism in their names, the Yushukan emphasis is on the sacrifice of individuals who died for Japan, not all of whom were Japanese nationals.

Just as the Yushukan skates around or ignores issues such as the “comfort women” and Unit 731, the British Imperial War Museums are not the place to go for the nasty bits in British history.

Unless you are explicitly interested in it, you are unlikely to note the tiny presentation on the extremely nasty war that Britain waged against indigenous people in colonial Kenya between 1945 and 1989. It was a war that was essentially whitewashed out of British history until 2016.

Similarly, in Ireland, there are numerous memorials to those who died fighting against brutal British colonial rule. One of the better known is the Cork County Gaol in County Cork, the departure point for my paternal ancestor who took the Kinmonth name to North America.

Despite the Irish War of Independence (1919-1921) involving British actions that would now be considered atrocities, the Imperial War Museum treatment is minimal at best.

Who Were the Criminals, What Were Their Crimes?

“Class A” war criminals were charged with political crimes.

Most notably, they were charged as “as leaders, organizers, instigators, or accomplices in the formulation or execution of a common plan or conspiracy to wage wars of aggression.” “Class A” does not mean those convicted had hands-on responsibility for atrocities or POW abuse. Those cases were handled in separate B and C class trials.

That the Tokyo Trial (International Military Tribunal for the Far East) was “victor’s justice,” and that most of the convictions and even the trial itself was unsound, was first popularized by an American left-leaning scholar Richard Minear in his 1971 Victor’s Justice: The Tokyo War Crimes Trial (Princeton University Press, 1971).

Minear drew heavily on the massive dissenting opinion of Radhabinod Pal (1886-1967), a Bengali who was very familiar with British imperialism in India, including the Bengal famine of 1943. That famine killed an estimated two million to three million Bengalis. It was due to policies approved by Winston Churchill.

This puts Churchill in the category of people that some British regard as untried war criminals.

Others include Sir Arthur “Bomber” Harris (1892-1984), who was responsible for the gratuitous firebombing of Dresden, and Tony Blair, who conspired with George W. Bush Jr. in the invasion of Iraq.

Knowing that prominent British military and political leaders have been — and, in the case of Blair, considered to be war criminals by a significant fraction of the British public — is important to putting the Japanese case in perspective.

Hanlon’s razor is a cynical aphorism that states, “Never attribute to malice that which is adequately explained by stupidity.”

While much foreign writing on Japan clearly reflects stupidity or laziness when it comes to fact-checking, in this case Hanlon’s razor points to malice. The Times is a major British newspaper and part of the media empire created by Rupert Murdoch. The article’s author is an Oxford graduate who has been reporting on Japan since 1995. It is hard to see such a blatantly biased article as being anything other than willful.

Moreover, this is not the first highly biased article in The Times. Nor is it the first questionable article by the author of this piece.

Once again, The Times presents evidence that any Japanese entity now advertising or thinking of advertising in that paper should look elsewhere for a friendlier venue.