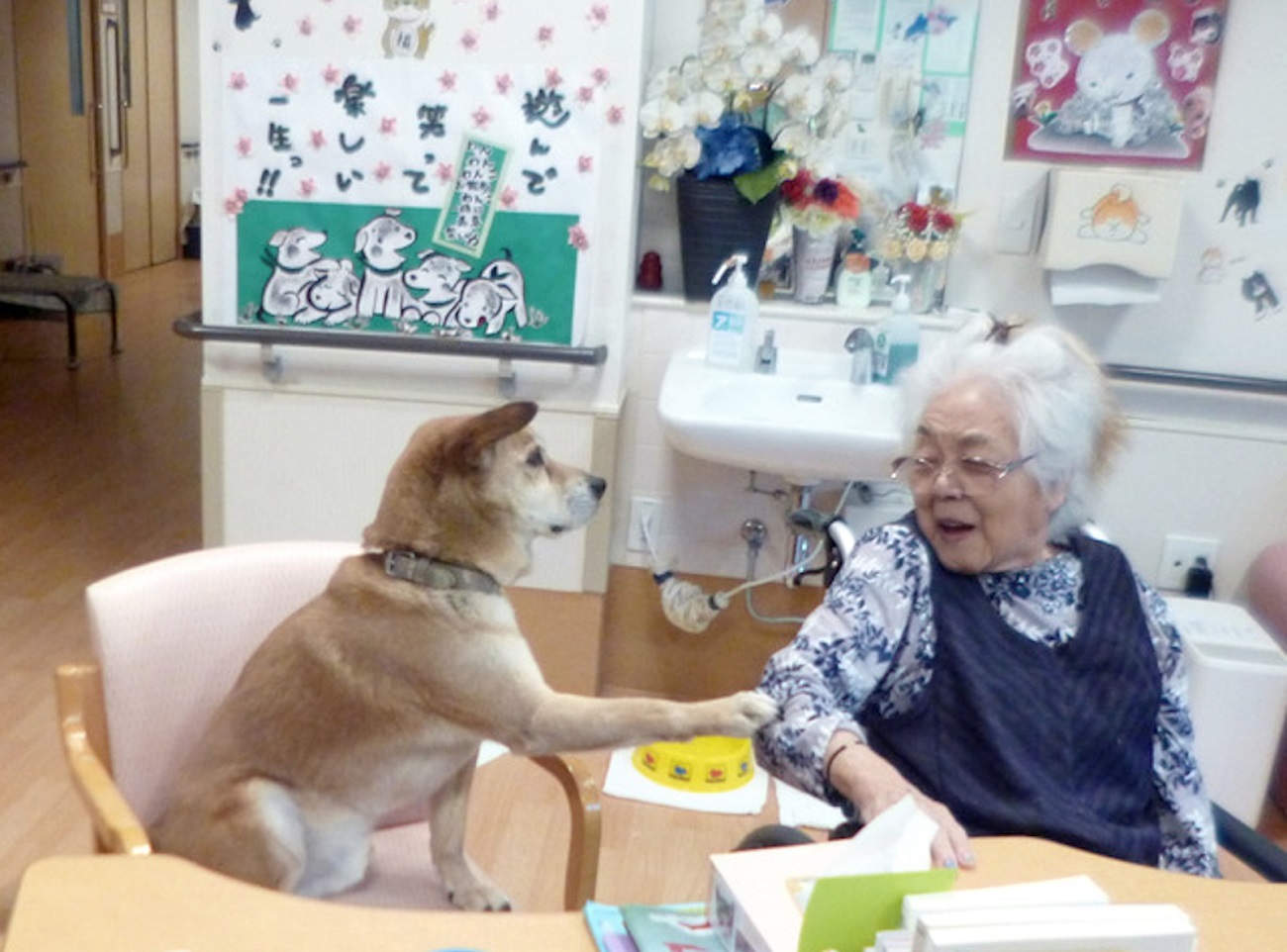 Bunpuku, a mixed-breed dog has a mysterious capacity for knowing when residents are approaching the end of life, and for staying by their side during their final hours.

The male dog, approximately 10 to 11 years old, lives at the Sakura Village Yamashina, a special nursing home for the aged located in the city of Yokosuka in Kanagawa Prefecture. It has a total of 40 rooms.

With their families allowed only limited visitation times due to the novel coronavirus pandemic, elderly residents and nursing care staff are taking comfort in the company of Bunpuku and other caregiver pets. 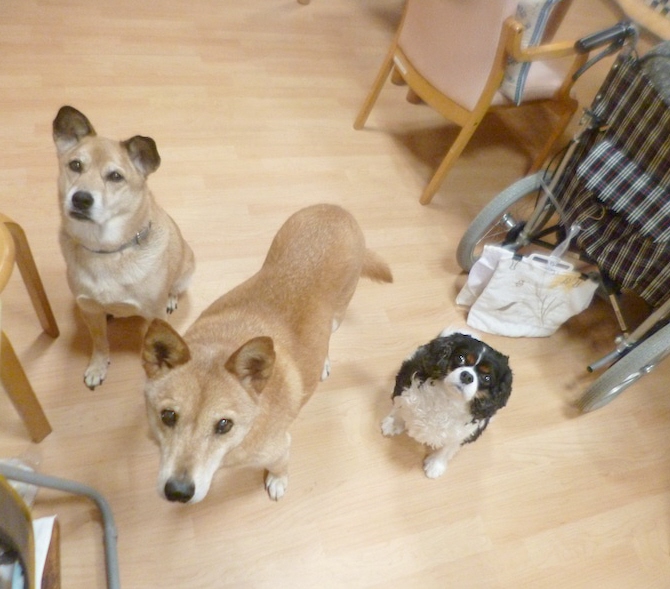 Bunpuku and friends at Sakura Village

Of the four units on the floor, two units are home to 10 dogs, and two units to nine cats. Most of these pets arrived together with their owners, but a handful were rescued by animal welfare groups.

Bunpuku was rescued when he was about to be euthanized. He came to the nursing home in April of 2012, and is considered one of the “old-timers” that has been around since the facility opened.

“He has neuralgia in his hips and recently has had difficulty walking. It’s typical for his age — the same as humans,” said facility director Michihiko Wakayama, 55, looking fondly at Bunpuku, who had regained enough strength for Wakayama to take him on walks around the neighborhood. 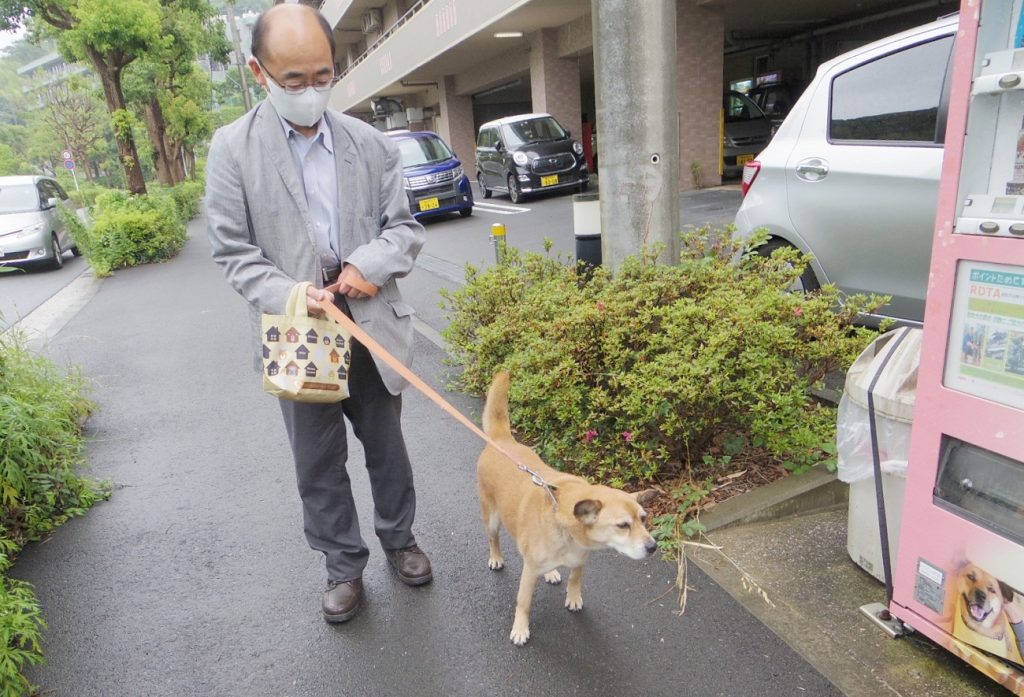 The staff became aware of Bunpuku’s mysterious behavior during the second year he lived at the nursing home. One day, Keiko Ideta, 50, head of the second-floor unit, noticed Bunpuku sitting and waiting outside one of the rooms. The following day, he followed the staff into the room and went to the bedside of the resident.

When this resident was approaching the final moments of life, Bunpuku jumped onto the bed and licked the resident’s face, as if he were reluctant to let the resident go. Even when the staff called him, Bunpuku did not want to leave his bedside watch.

Bunpuku repeatedly exhibited the same behavior when other elderly residents in the unit approached the end of their lives. 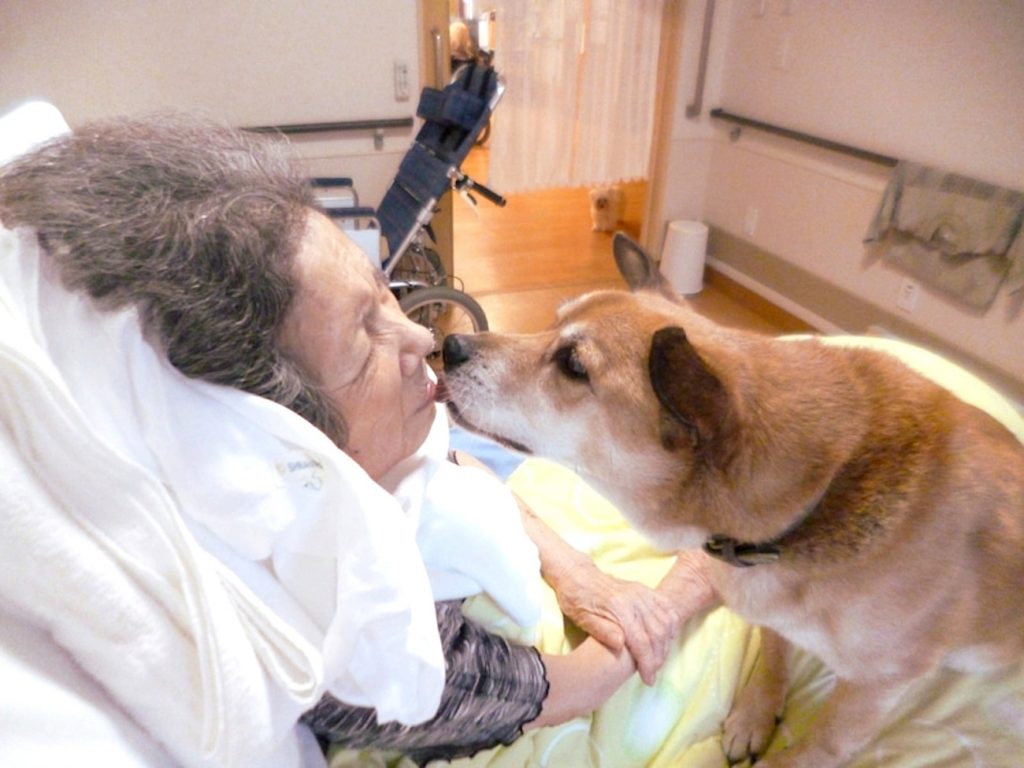 Bunpuku jumps right up on the bed to comfort patients who are nearing their last days.

“I think perhaps he can tell that a resident is approaching the end of life by some sort of smell. If so, the other dogs should be aware as well, but Bunpuku is the only one who goes to be near the dying person. It’s about his personality, his sense of purpose,” explained Director Wakayama.

Bunpuku’s bedside vigils are a big support for end-of-life care. Yoshihiro Suzuki (pseudonym), a resident in his late 80s, had been told by a doctor that he had “one week left to live.” Subsequently, he had lost consciousness. Formerly a fisherman based at the nearby Sashima fishing port, Suzuki had been heard mumbling “Sashima” in his delirium.

Ideta proposed taking Suzuki to the Sashima fishing port one last time. She wanted to help him realize “an end-of-life best befitting him.” Yet, others cautioned against the outing at a staff meeting, worried that it would put undue stress on Suzuki’s body. Ideta added with determination, “How about we take him if Bunpuku’s bedside vigils have not yet begun?”

The staff, having witnessed Bunpuku’s vigils, agreed. Suzuki, accompanied by his daughter, Ideta, and a nurse, was taken to visit the Sashima fishing port infused with so many of his memories. His condition remained stable with his blood oxygenation level even rising. Six days after Suzuki’s visit to the fishing port, Bunpuku’s vigils began, and Suzuki passed away peacefully surrounded by family.

Facility director Wakayama compiled Suzuki’s story along with others, and reissued them this year as a book entitled The Bedside Vigils of Bunpuku the Dog: The Story of a Miracle Pet’s Companionship at the End of Life (Takarajimasha, Inc., Japanese, June 2020). 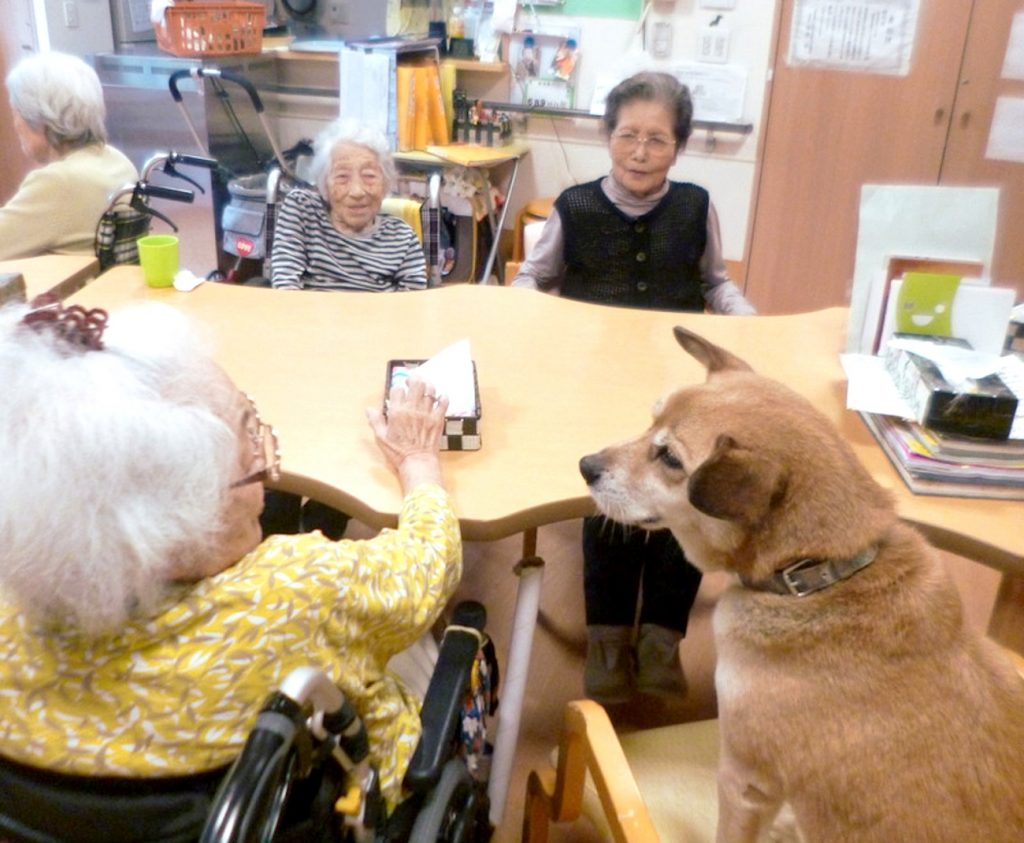 Bunpuku attends and entertains residents of the 2nd floor at Sakura Village.

Even During the Corona Calamity

In the midst of restrictions on visitors and outings due to the novel coronavirus pandemic, the volunteers who come from outside the facility to care for Bunpuku and the other pets are also no longer able to visit. Yet, the staff has found that at times like these, the pets play an even greater role.

“Even during the last few months, the mood on the second floor is comparatively lively, and most residents are leading active daily lives. The pets are also a comfort to our hard-working staff. I am again reminded of the power of our pets,” said Wakayama.

(Read the article here in its original Japanese.)