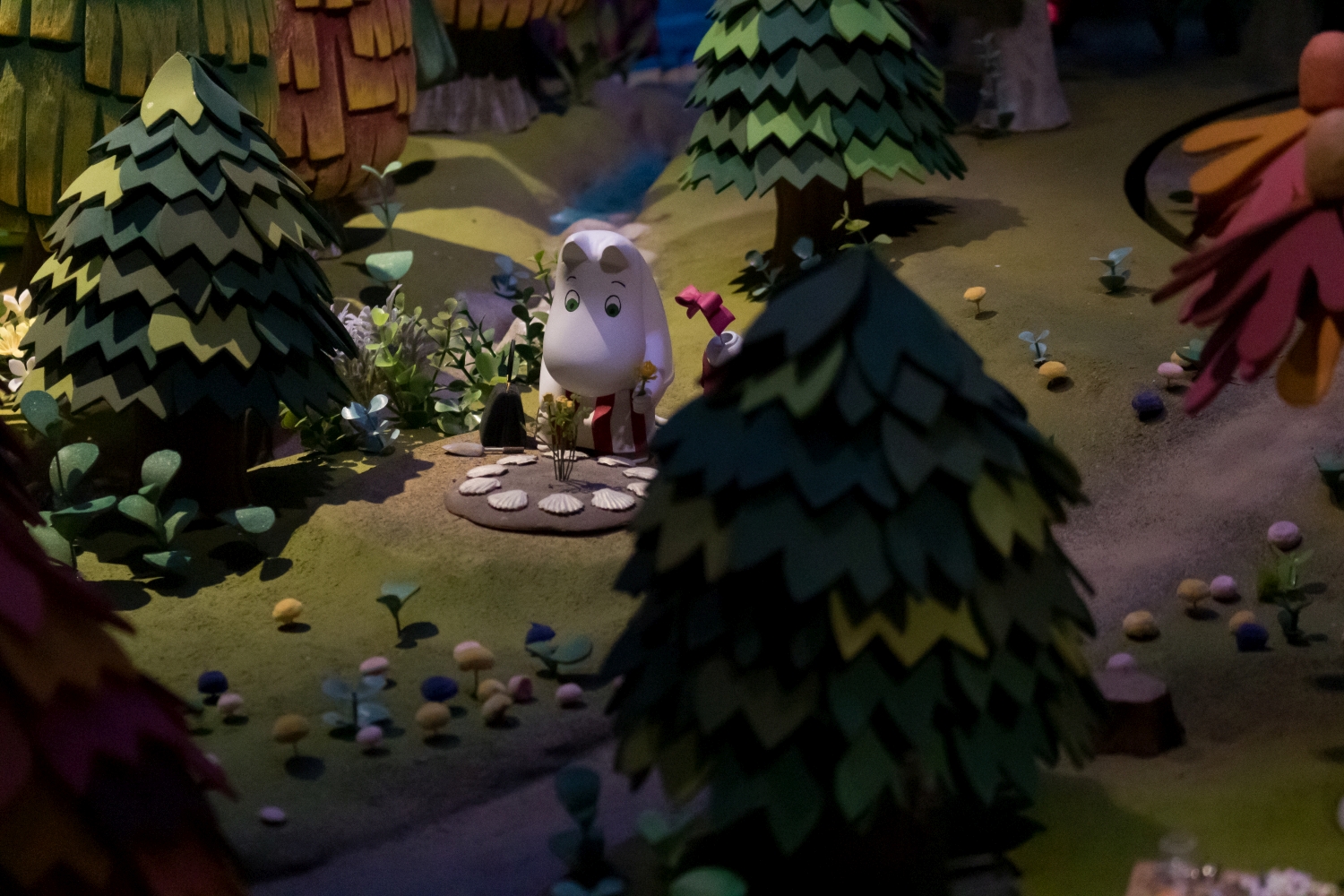 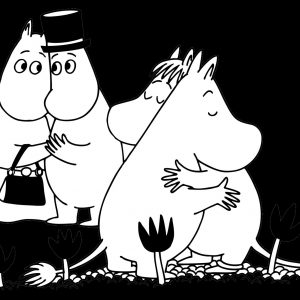 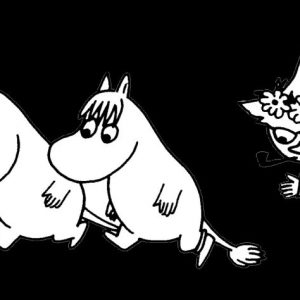 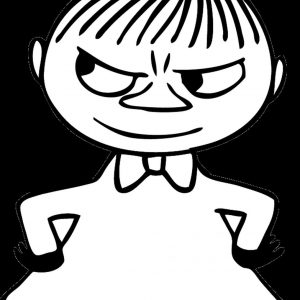 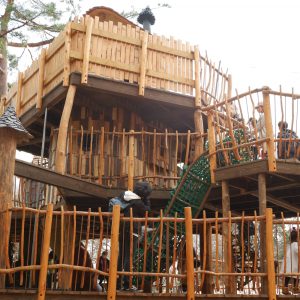 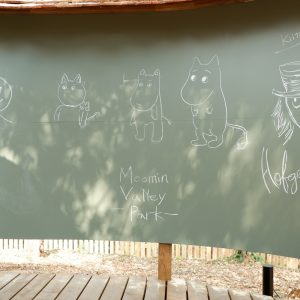 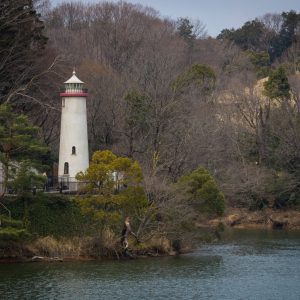 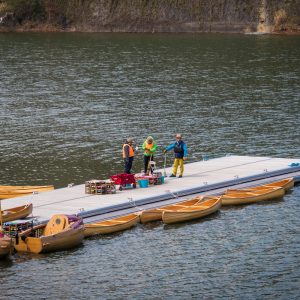 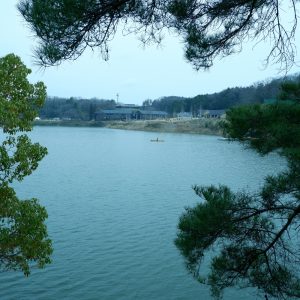 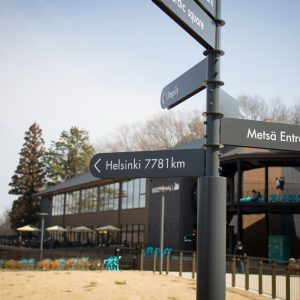 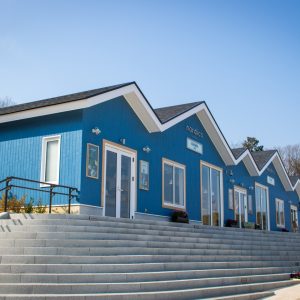 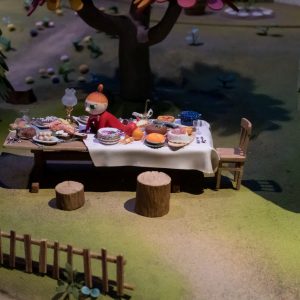 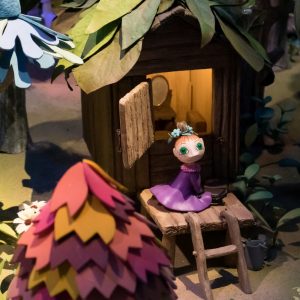 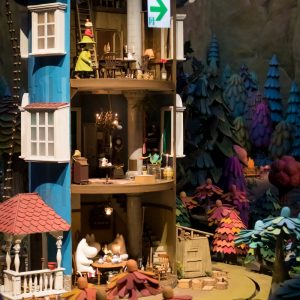 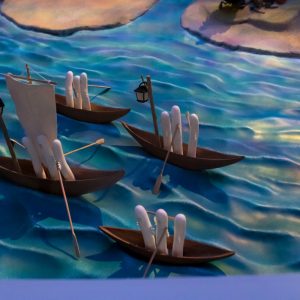 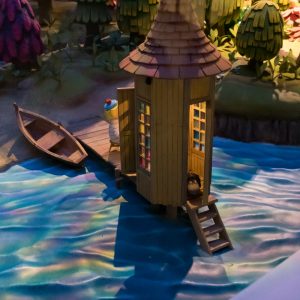 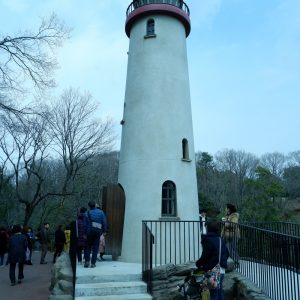 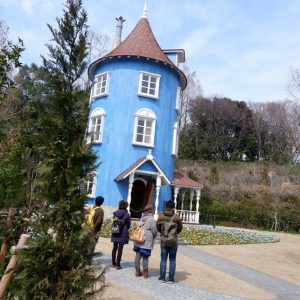 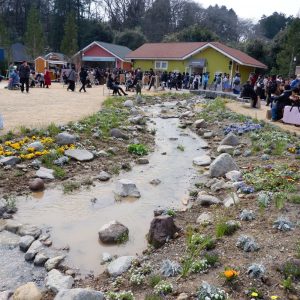 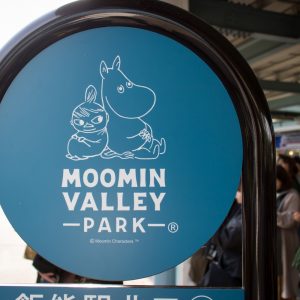 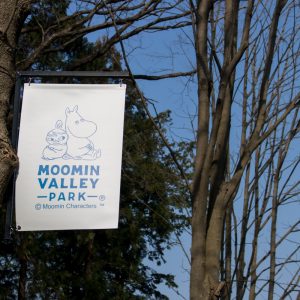 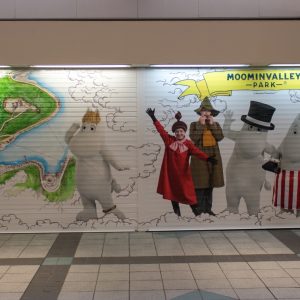 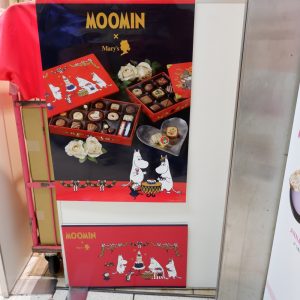 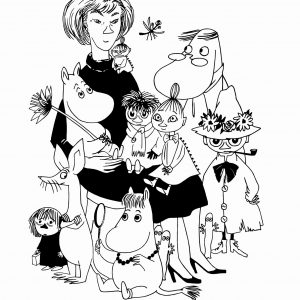 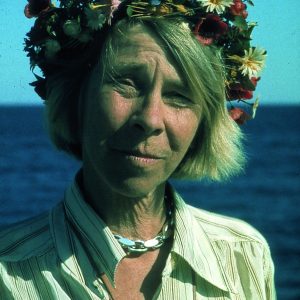 The MoominValley Park in Hanno, Saitama Prefecture, opened on March 16, attracting fans including the author of this article and his 18-year-old son who were part of a multi-kilometer queue from the car park to the venue entrance.

Some children and not a few adults were dressed as their favorite MoominValley characters . Others clutched MoominValley stuffed toys.

Much of our time in the queue was spent behind a young couple with his-and-hers stuffed toys: Moomin Mama and Moomin Papa. I too have a Moomin stuffed toy dating from the 1970s, but it is in storage in my house in Sheffield, England.

The Metsa Village is free. It offers restaurants and cafes with Nordic themes and food, shops selling Nordic good, primarily from Finland, and opportunities to see and experience Finnish crafts, especially woodworking and embroidery. It also offers rowboat and canoe rentals. As the official website for Metsa says, it is a good place to “chill out” (relax) in a natural environment that has some resemblance to that part of Finland where the character’s creator, Tove Jansson, lived.

The first MoominValley theme park opened in Finland 1993 and is in part a model for the park in Hanno. The Moomin Village is being developed by Fin Tech Global Incorporated and the city of Hanno is built on land purchased from the Seibu Railroad. A video showing the planning and construction of the Moomin Village is available on YouTube.

The principal difference between the free Metsa Village and the fee charging MoominValley Park is that the former has a general Nordic emphasis while the latter is specific to Moomin, with reproductions of buildings appearing in the the Moomin stories, including the lighthouse and the Moomin family dwelling. Seeing the interior of these requires tickets that can be bought from vending machines near the buildings themselves. On the day we visited, tickets had sold out during the morning, and we were unable to evaluate these attractions, as they are styled by the park.

All but one of the attractions are static, unlike the rides typical of theme parks. The one exception is a “dip line” that allows you to sail 225 meters over the lake (reservoir) suspended from a wire rope and an upper body harness. The most notable aspect of this attraction, which was also sold out, is that it appeared to be immensely popular with young and early middle-age women.

My son and I watched the dip line both from a distance and one of the launch points. Only women seemed to have the courage to engage in something that one might associate with James Bond or Spiderman. Even if tickets had been available, neither I nor my son wanted to try the dip line.

In addition to the extra fee attractions, there is a restaurant with a Nordic-inspired menu, a play area for children with several Moomin-inspired play structures, an outdoor stage with periodic offerings of vignettes from the Moomin stories, and a museum dedicated to Tove Jansson and her Moomin stories. None of these facilities require extra payment.

My son was smitten by the museum because it showed the evolution of the Moomin characters over time. The Moomin in Jansson’s early stories and drawings is quite different from the Moomin generally known now. The museum gives a good sense of Tove Jansson as an unusually creative woman who, somewhat to my surprise, was quite open to commercializing Moomin. Along with reproductions of original drawings by Jansson, there is also a large collection of knick-knacks and souvenir shop items that she personally designed.

In this context it is perhaps worth noting that while Tove Jansson (1914-2001) was a Finnish citizen and the Moomin stories are generally assumed to be Finnish, Jansson was a member of of the Swedish-speaking minority in Finland. She wrote her stories in Swedish, not Finnish. Similarly, her art education was in large part in Sweden, not Finland.

The settings of her stories were certainly influenced by the summers she spent at Blidö in the Stockholm archipelago and at Pellinki in the archipelago of the Gulf of Finland. Promotional literature for the park  claims that the Hanno location was chosen in part for its resemblance to that part of Finland where Jansson spent her summers. Jansson herself insisted that MoominValley exists in the hearts and minds of those who followed the stories, not in some temporal location.

Her family connections were predominantly in Sweden and Pellinki. While the latter is administratively part of Finland, even now it is an area where 95% of the population are said to be Swedish speakers. Assigning Jansson and her stories solely to Finland ignores her personal background and her personal genius that transcended geopolitical boundaries.

For those with an extended interest in Tove Jansson and her Moomin family, there have been two recent events – one ongoing until mid-June – centered on this truly remarkable woman.

First, a touring exhibition of Moomin original drawings has come to Japan. It will be at the Mori Art Center Gallery in Roppongi from April 9 to June 16.

Second, as is noted on the website for the Mori Art Center exhibition, 2019 is the 100th anniversary of the establishment of diplomatic ties between Japan and Finland. The Embassy of Finland held an open house day, open to the public, on April 14 as part of the celebration of a century of Japan-Finland relations. Although the embassy event was primarily about Finland itself, Tove Jansson and Moomin comprised one component.

There have been several anime (animated) versions of the Moomin stories in Japan.

The first was produced in 1969-1970 by Fuji Television Network with Miyazaki Hayao as one of the animators. It drew the wrath of Tove Jansson because the series substantially altered the characters in the original stories and added modern elements that were not part of the lives of the MoominValley inhabitants.

A second series, somewhat closer to the original stories, was produced in 1972 — again by Fuji Television. I watched this series when I was first learning Japanese conversation.

A third Japanese series, entitled 楽しいムーミン一家 (Delightful Moomin Family), was produced between 1990 and 1992 in 104 episodes by Telecable Benelux B.V. This version was aired widely outside of Japan and is credited with creating an international boom in the Moomin stories and characters. It also spawned a movie inspired by the story, Comet in Moominland.

Many of the opening day visitors to the Hanno park appeared to be of the age cohort that would have seen the 1990s version of the Moomin series. This is the one I watched with my children when they were preschool and elementary school age. In so doing I was reminded once again of how sophisticated and nuanced the stories are.

A new animation series produced as a joint British-Finnish project is scheduled to be broadcast by NHK starting on Thursday, April 4, 2019, at 7:30 P.M. on its BS-4K satellite channel, with subsequent broadcasts on Tuesdays at 10:45 A.M. and Thursdays at 9:30 P.M. A number of voice actors associated with other well-known Japanese anime provide the voices for the upcoming NHK broadcasts.

As of this writing, there does not appear to be an official NHK website for this new version. There are 13 segments, each 24 minutes in length. The animation was done using computer graphics technology rather than hand-drawn cell animation. Moomin fans must hope that the series will soon be aired on NHK terrestrial channels.

When I was first learning Japanese conversation many years ago, I found the Moomin television series both useful and enjoyable. The stories are sophisticated enough to hold the attention of an adult while the voicing of the characters is a good introduction to how real-life spoken Japanese varies by age, gender, and other factors. The dialog is leisurely and the pronunciation very clear.

With the general demise of DVD rental stores in Japan, the programs can be hard to find, but DVD versions are available from home delivery rental outlets that can be found by an internet search. Individual DVD and boxed sets are also available for sale, but those that have become collector’s items are quite expensive. Some episodes from the 1969-1972 Japanese animation version can also be found on YouTube.

In addition to the theme park in Saitama, there are Moomin-themed cafes in Tokyo and other cities in Japan, as well as stores specializing in Moomin goods. Because hours and locations may change, it is best to search the internet for current locations and times.

These operations are well-represented by English-language websites. One of these cafes attracted foreign press attention as a response to loneliness — something the foreign press exaggerates as a singularly Japanese issue.

MoominValley Park and Metsa Village are partially accessible to persons requiring accommodation for wheelchairs. When I visited the park, I noted several elderly wheelchair users, but some of the slopes are very steep and might present problems without a helper. There is generous provision of wheelchair-access toilets. Some hillside paths are inherently off limits.

Another option is the recently-introduced LaView trains that make the journey in 42 minutes. All seating is reserved and there is an additional ￥500 JPY charge. Aside from a slightly shorter journey time and guaranteed seats, the LaView trains offer free on-board WiFi, wheelchair-access toilets, and other amenities.

The LaView trains were designed by noted Japanese architect Kazuyo Sejima. She, along with Ryue Nishizawa, was only the second woman to win the prestigious Pritzker Architecture Prize. She is internationally known and design elements that make her buildings distinctive appear in her design for the LaView carriages.

Before their introduction, the LaView trains were the subject of extensive coverage in foreign media, some of it quite fanciful. It was said they would be reflective so that their appearance would change as they moved, making them invisible. The reality is quite different. The trains have a brushed metallic surface that is not notably reflective.

The most striking exterior feature is actually the unusually large windows designed to make viewing the passing scenery easier.  To gain the full benefit of these windows, it is necessary to continue on the line from Hanno to Chichibu. Between Hanno and Chichibu the train makes a leisurely run along a line that hugs the southwest side of the mountainous Komagawa valley, an area with many hiking trails ranging from those suitable for casual walking to others that require some mountaineering kit.

Disclaimer: I and my son visited the park as ordinary fee-paying patrons.  Neither of us received any payment of any kind from any of the commercial entities mentioned in this text.

The official website for Moomin in Japan is here but it is in Japanese only. The blog site for Moomin gives information about the opening in English, but not details for visiting. English versions of the websites related to both parks have numerous pages that need revision to reflect that both parks are already in full operation.

The available information indicates Moominvalley Park and Metsa Village are open daily from 10:00 A.M. to 9:00 P.M. Checking the website is recommended, particularly if you plan on visiting near major national holidays.