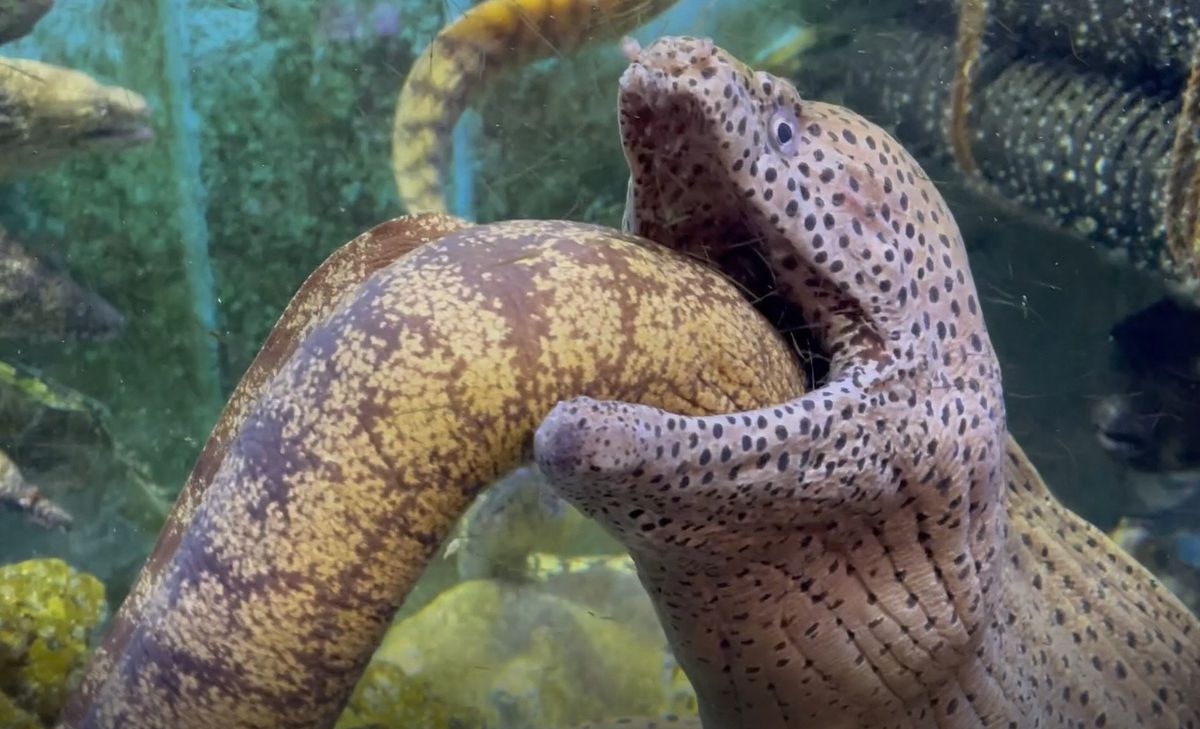 Scene from the Aquarium of Prawns and Crab in Susami Town, Wakayama Prefecture.

A moray eel inside the mouth of another moray eel…. Such footage captured at the Aquarium of Prawns and Crab in Susami Town, Wakayama Prefecture, gained popularity on Twitter and has recorded over one million views.

It appears as though the smaller moray is about to be eaten by the bigger moray. However the small eel manages to escape and is out of harm’s way.

On November 20, 2021, at around 5 pm, Atsushi Hirai, the aquarium’s director, noticed activity in a water tank near the entrance of the aquarium. Inside, an approximately 90-centimeter-long moray eel had entered headfirst into the mouth of a black-spotted moray measuring at about 1.7 meters long, prompting him to record the scene with his smartphone.

He continued to shoot for a little over 20 seconds and was able to capture the smaller eel escaping on its own.

Early next morning on November 21, when Mr. Hirai uploaded the video on the aquarium’s Twitter account, it recorded the highest number of video views ever.

As carnivorous predators, black-spotted moray eels feed on a variety of fish.

Looking back, Mr. Hirai says, “I was worried that the smaller moray eel was going to be eaten by the bigger one. But I was relieved when it quickly made its way out.”

Speculating on the incident he explained, “It might have been due to it being inside of a water tank, which is a unique environment, but I do not know why. Similar behavior could happen in nature.”

A Japanese spider crab had lived in the water tank until August, 2021. But due to a malfunction of the cooling system, the aquarium started rearing moray eels instead. There are about 50 moray eels of eight different species living there today.

Speaking on the popularity of the video, Mr. Hirai says, “I appreciate the overwhelming response. I hope it helps to bring in more visitors to the aquarium.”