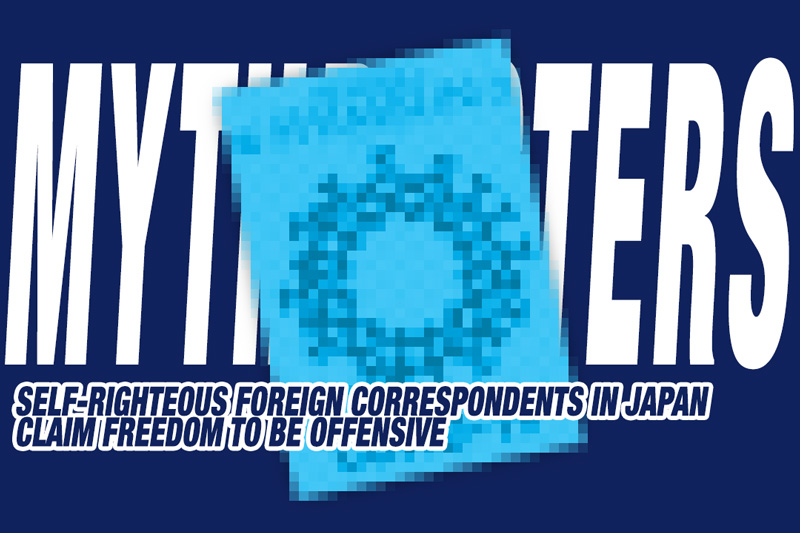 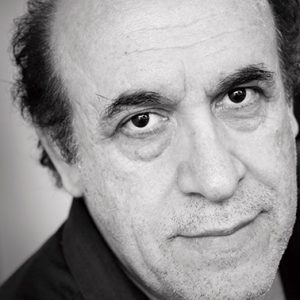 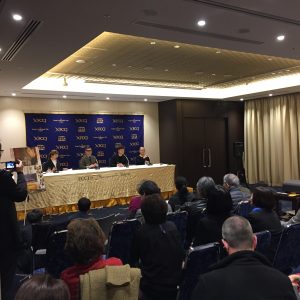 On May 21, the Foreign Correspondents’ Club of Japan (FCCJ) announced that it had removed from its website the cover design that had appeared on the April edition of Number 1 Shimbun, its house magazine. This was done after a complaint from Tokyo Olympics organizers that it considered the cover design to be an infringement of the copyright held by the Organizing Committee.

FCCJ president Khaldon Azhari said legal counsel had advised that the FCCJ was in a very weak position if it tried to defend against a copyright infringement claim. He also repeatedly apologized for any offense that might have been caused by the cover design.

Reaction to this issue has been sharply divided. During the online press conference announcing the take down, two elderly members of the FCCJ attracted attention by displaying the “satirical logo” on their person to show their opposition. Other members took to Twitter to express their scorn for the FCCJ board decision.

Japanese reaction as seen on Twitter and in blog commentary has been highly critical of the FCCJ, seeing the logo as at best highly insensitive, and at worst emblematic of the FCCJ as an anti-Japanese organization.

On Twitter, a hashtag (#FCCJの公益法人取り消しを要求します) calling for the revocation of the FCCJ status as a public benefit corporation attracted a brief flurry of interest. This status carries preferential tax treatment of income and contributions.

The communication from the Tokyo Olympic organizers to the FCCJ left room for a “freedom of expression” interpretation. As reported in English by Agence France-Presse, it said: “It is very disappointing to see the games emblem being distorted and associated with the novel coronavirus, which affects human life, people’s lives, the economy, and our society. The design is clearly using the design of the Olympic emblem. We therefore consider it an infringement on our legally secured copyright to the Tokyo 2020 Olympic emblem.”

This could be read as saying that the Tokyo Olympic organizers were asserting copyright only because of the way in which the FCCJ design had used the Olympic emblem. But the Organizing Committee did not threaten legal action, and treating this as even a veiled attack on freedom of expression is highly questionable.

In the run-up to the 2012 London Olympics, agencies with Olympic branding rights were so aggressive that the copyright issue moved from legal newsletters to general interest news media. In an article, entitled “Olympics 2012: branding ‘police’ to protect sponsors’ exclusive rights,” The Guardian described how Britain had passed new legislation providing both civil and criminal penalties for alleged infringement of Olympics-related copyright.

Images that suggested any association with the London Olympics were covered by this legislation. Bakers who planned to use Olympic-related symbols to decorate cakes were warned that they could face legal action. Even elderly women who made items for church fundraising events were targeted.

During the press conference, FCCJ’s Azhari and the moderator repeatedly asserted that Japan was a hostile environment for parody and satire.

It is hard for me to see the logo designed by the FCCJ as satire, conventionally defined as “the use of humor, irony, exaggeration, or ridicule to expose and criticize people’s stupidity or vices, particularly in the context of contemporary politics and other topical issues.” While some may find an element of humor in the FCCJ logo, the question then becomes what “stupidity or vices” were its target?

The Number 1 Shimbun April issue with the controversial cover (now blank, except for COVID-19,) did not actually offer any satire. The only COVID-19-related content was an article entitled “Tips for Journalists Covering COVID-19” by Miraj Ahmed Chowdhury. As the title suggests, it deals with mechanical issues, such as data sources, how to get expert commentary, and the like.

I would think the FCCJ design was a parody, defined as “the imitation of the style of a particular writer, artist, or genre with deliberate exaggeration for comic effect.” But, if so, what is comic about COVID-19? Even if the magazine went to press before March 11, when COVID-19 was declared a pandemic, it should have been obvious to those producing the magazine that COVID-19 did not warrant a puerile attempt at humor.

That there is nothing obviously humorous about a pandemic did not stop some FCCJ members from claiming that the COVID-19 cover was a parody and protected as free speech. Michael Penn, one time vice president of the FCCJ, wrote:

The front cover served as a commentary on the deep relations between the spread of the coronavirus and the Tokyo 2020 Olympics. Parody is one valid way of speaking truth to power…. The demand of the Tokyo Olympic Organizing Committee to delete its parody of 2020 Olympic logo from the internal club magazine was, therefore, entirely unacceptable from the outset.

Other prominent journalists and FCCJ members who condemned the organization for capitulating on a freedom of expression issue were Martin Fackler, who was New York Times Tokyo bureau chief from 2009 to 2015, and David McNeill, a long-time correspondent for The Economist and organizer of FCCJ events.

There is no question that the FCCJ likes to posture as a bastion of free expression in an otherwise repressive Japan. In his statement, FCCJ president Azhari repeatedly stressed that, throughout its 75-year history, the FCCJ had stood for freedom of expression and that it was responding to the copyright issue and to that issue only.

Individual members of the FCCJ are given to claiming that they take up issues the Japanese news media are unwilling to touch. That claim has limited validity. Japanese weekly magazines and some tabloids, as well as local newspapers and muckraking newsletters, take on almost any subject.

The most commonly cited evidence of the FCCJ doing something that the local media will not do is the 1974 press conference in which the late Sam Jameson asked the then-prime minister a question, mentioned a Bungei Shunju article that made allegations about how Kakuei Tanaka had acquired his wealth. By asking, it is said that he made it acceptable for establishment media to take up those allegations.

Aside from this being 46 years ago, it was inadvertent. Sam Jameson, a personal friend who did a guest lecture for me (in Japanese) in my course on foreign media coverage of Japan, was actually an admirer of Kakuei Tanaka and had no intention of outing him when he asked his question.

An Organization in Decline?

While continually calling for more transparency on the part of Japanese entities, getting information about what is going on within the FCCJ itself is extremely difficult. But it has clearly been hurt by secular changes in the news media. Many news organizations withdrew their correspondents stationed in Japan in the 1990s, resulting in a loss of dues-paying members. And, as noted nearly a decade ago, the internet and technological changes have radically reduced the need for services offered by the FCCJ.

The FCCJ has also suffered from poor financial management, costly labor disputes, and substantial expenditures on legal fees associated with ill-advised contractual agreements. In 2014, there was a major dispute over whether Michael Penn (cited above) qualified as a foreign correspondent.

Moreover, full-fledged journalist members have long been complaining of opaque and secretive decision making within the FCCJ, most recently during the May 21 press conference.

A July, 2019, article in the Number 1 Shimbun quoted an official of the FCCJ as saying: “There are around 1,600 associate members of the club at present, and around 275 regular members. Ideally…the FCCJ would have a total membership of around 2,200 and a waiting list.”

In other words, the FCCJ is no longer primarily a club for foreign correspondents and is well below its desired membership level.

Ironically, this flap may be beneficial to the FCCJ. Until this issue arose, the Number 1 Shimbun was virtually unknown and had a print distribution of only around 1,000.

Personally, I found the COVID-19 cover more puerile than offensive. For me, the biggest problem with the FCCJ is that it is an occupation-era anachronism and seeks to preserve occupation-era prerogatives for foreign correspondents.

The most important point to come out of this flap was one made repeatedly by FCCJ president Azhari. Foreign correspondents in Japan need to respect Japanese sensitivities, just as they would need to in any country.

To this, I would add that foreign correspondents should be reporting on Japan, not preaching to the Japanese or attempting to make their readers feel culturally, even racially, superior to the Japanese — something that is all too evident not just in what some FCCJ members write, but in the organization’s conduct.