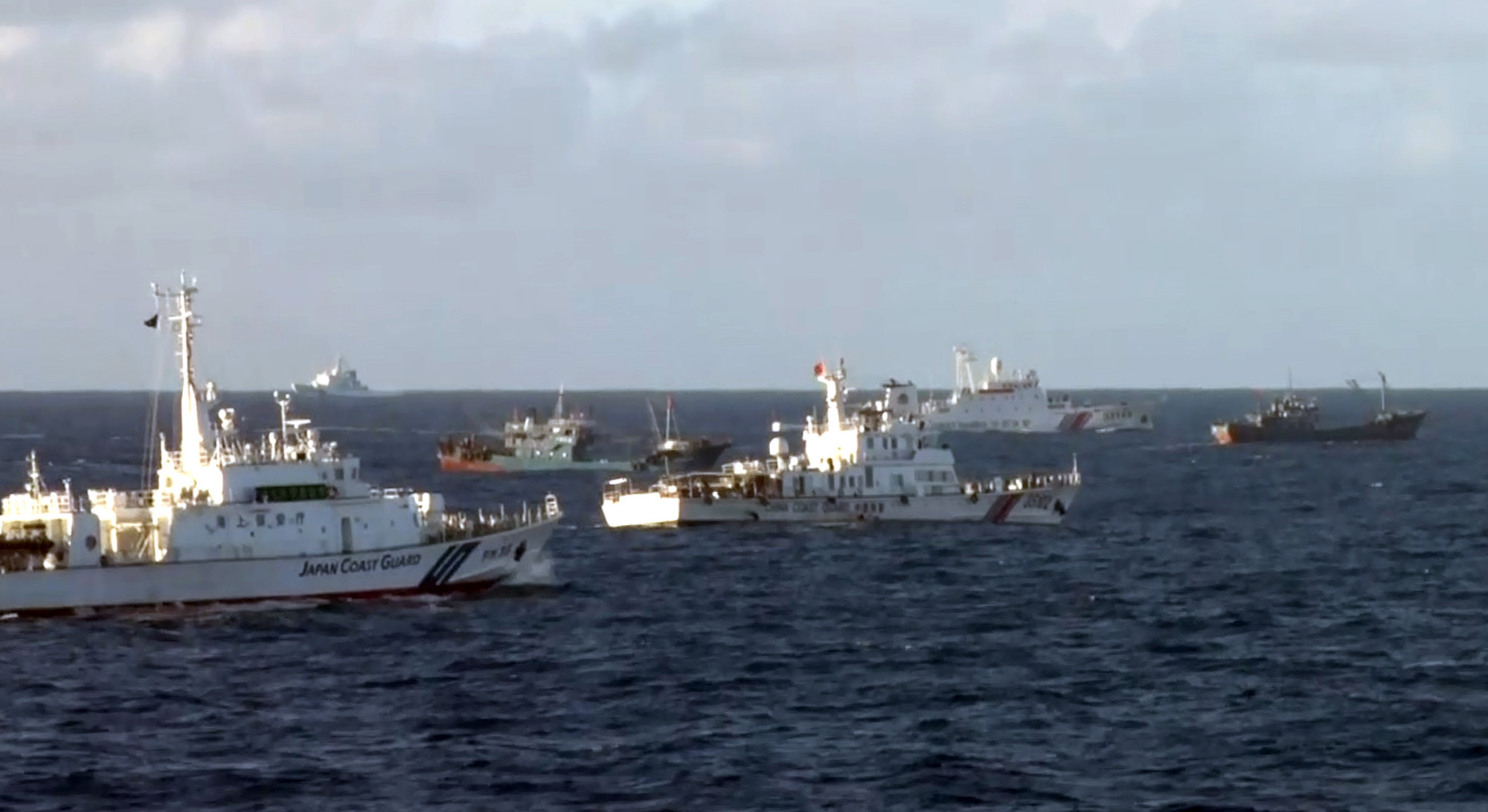 Even as nations around the world are struggling to respond to the challenge of the novel coronavirus pandemic, China has been making provocative moves in the seas around the Senkaku Islands, as well as in the vicinity of the Ryukyu Islands chain and the South China Sea.

Observers view this as a warm-up for post-coronavirus attempts by China to expand the maritime territory it controls. As the Japanese government grows more vigilant about this trend, it is seeking ways to strengthen collaboration with countries in the Indo-Pacific region which share its concerns about China.

A source says the Japanese government sees these latest Chinese moves as “part of an effort to make such maritime intrusions a fait accompli.”

A Japan Self-Defense Force official says the Chinese are “attempting to get people to think that the presence of Chinese vessels in the vicinity of the Senkakus is perfectly normal, paving the way for a claim of effective control of the area.”

In reply to Japan’s protests, a Chinese Foreign Ministry spokesperson made no effort to hide China’s true motives, blithely maintaining that the “Japanese fishing vessel was illegally operating in China’s territorial waters.”

Although on paper China’s Coast Guard corresponds to Japan’s Maritime Safety Agency, in reality it has been part of the Chinese military since it was placed two years ago under the control of the Chinese Communist Party’s Central Military Commission, headed personally by Chinese President Xi Jinping.

On May 15, Prime Minister Shinzo Abe appeared on Genron TV, an internet program run by journalist Yoshiko Sakurai. In reference to the Senkaku Islands situation, Abe emphasized, “I can’t give any details, but we are making an overwhelming response…. I want to speak in clear terms so that [President] Xi Jinping will not misinterpret the intentions of the Government of Japan.”

Nevertheless, it seems fair to say that the end result of repeated Chinese provocations is that they are attempting to normalize their intrusions into Japan’s territorial waters. Beijing continues to turn a deaf ear to Japan’s protests, and it is pushing hard toward its goal of making “control of the Senkakus” something that has already been decided and cannot be changed. 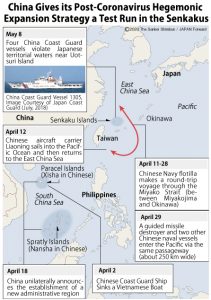 From April 11 to 28, a Chinese Navy flotilla made a round-trip voyage through the Miyako Strait that separates Miyakojima from the main Okinawa island for the first time. The Chinese aircraft carrier Liaoning and its five-ship strike group sailed into the Pacific Ocean and then returned to the East China Sea. Then, on April 29, a guided missile destroyer and two other Chinese naval vessels entered the Pacific via the same approximately 250-kilometer-wide passageway.

The Ryukyu chain of islands is of critical geopolitical importance because the Chinese Navy must transit it in order to get from the East China Sea to the open Pacific. These naval exercises appear to be attempts to test Japan’s deterrence capability during the coronavirus epidemic.

China has become even more aggressive in the South China Sea and around Taiwan. For example, on April 18, Beijing unilaterally announced the establishment of a new administrative region covering the Paracel Islands (Xisha in Chinese) and Spratly Islands (Nansha in Chinese), both disputed territories over which it claims sole sovereignty.

According to a Kyodo News report, the Chinese Navy is planning a large-scale amphibious operation in August premised on the seizure of the Pratas Islands (Dongsha or Tungsha in Chinese), an atoll group located in the northern part of the South China Sea over which Taiwan currently exercises effective control.

In order to respond to the inevitable post-coronavirus shakeup of the military balance by China, Japan and the United States are taking the lead in establishing the Free and Open Indo-Pacific Strategy.

Japan’s Self-Defense Forces and the U.S. military have continued to conduct joint military exercises with naval vessels and aircraft that have not been directly affected by the coronavirus epidemic. For example, on May 12, 16 Japan Air Self Defense Force fighters joined two U.S. strategic bombers for formation navigation flight training.

The U.S. Military’s Indo-Pacific Command has scheduled the biennial Pacific Rim Exercise (RIMPAC) for August. Holding of the mammoth maritime warfare exercise appeared in jeopardy due to the coronavirus, but participants seem intent on sending a message of solidarity and deterrent capability to China.

General Koji Yamazaki, who, as chief of staff of the Joint Staff of the Self-Defense Forces, is the highest-ranking uniformed official in the SDF, has been in close touch with Lt. Gen. Kevin B. Schneider, commander of the U.S. Forces Japan, and other high-ranking U.S. military representatives who share his sense of crisis.

Since the middle of April, Defense Minister Taro Kono has also been holding telephone discussions with his counterparts in countries with shared interests in the Indo-Pacific region, including the United States, Australia, India, and the Philippines. He has been calling for multilateral solidarity and reaffirmation of the shared policy of “opposing any attempts to use force to make unilateral changes to the status quo.”

However, so far, at least such efforts seem to have done little to rein in China’s bad behavior.