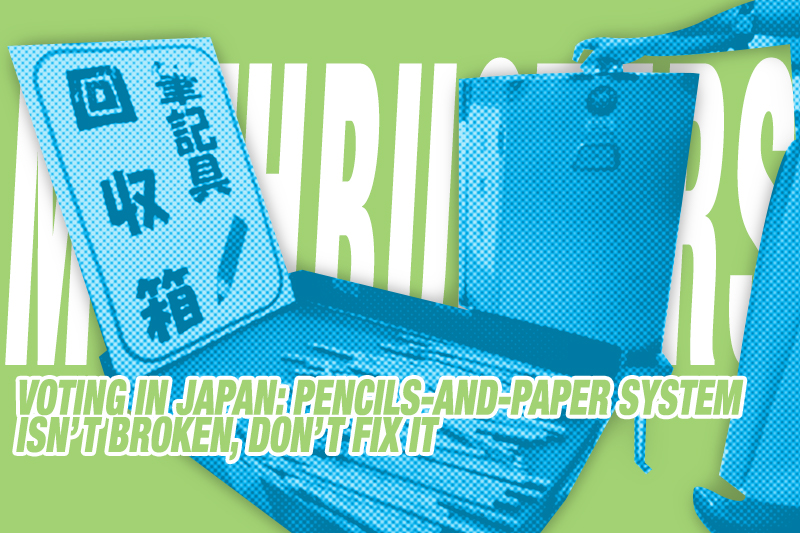 Throughout the COVID-19 pandemic, foreign commentators have been ridiculing the Japanese people for reliance on retro technology and clinging to supposedly outdated business practices. Oddly, in their quest for themes that can be used to assure foreign readers of their superiority, they have overlooked our voting system, which relies on blank paper ballots marked with pencils.

Although there has been legal provision for voting machines since 2002, voting in Japan, with rare exceptions, still means writing something on a piece of paper using a pencil. 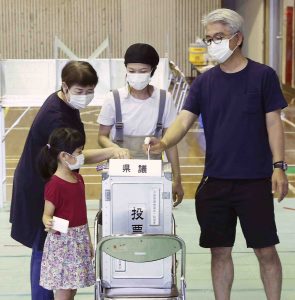 On July 5 there will be an election for the governor of Tokyo. My wife and I will have a casual discussion about the candidates and then walk together to the polling place, a nearby elementary school. My older son goes by himself.

On entry we will each show the “polling place admission ticket” (投票所入場整理券) we received by mail, and we will each be asked if we are the person named on the card. Even though I do not “look Japanese,” I have never been asked for any identification other than the ticket.

Next, we go to a person seated at a table who gives us a small, blank sheet of paper. This is the ballot.

We take the blank ballot to a row of partitioned writing spaces that have the candidate names printed on a sheet of paper at eye level.

We write the candidate name on the paper ballot with a pencil, fold it, and drop it in a sealed ballot box.

There are formal rules for allocating the vote when what is written on the ballot is ambiguous or incorrect.

Because there is also a by-election in my ward to fill a vacancy in the municipal assembly, we will receive a second ballot colored orange and write a second name, depositing this ballot in a separate box.

We then receive a receipt (投票済証明書) showing that we voted. These are issued by some local government authorities, but they have no legal significance. They may be redeemable for a small amount of money when making local purchases.

In upper house elections, there are also two paper ballots. On one you write the name of your preferred candidate for your district. On the other, you write your party preference or the name of an individual candidate.

It is also possible to be elected to office without any ballots being cast. This happens in local elections when the number of candidates equals the number of offices. 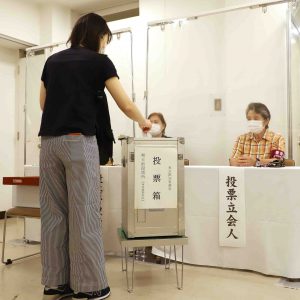 Casting a ballot at a Japanese voting station 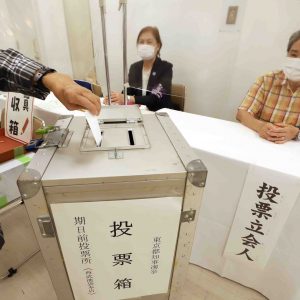 A simple ballot box collects the ballots written out by voters

The name you write on the ballot is not necessarily the “real” or legal name of the candidate. Japanese electoral law allows for candidates to stand for election under what are called tsusho (通称), variously translated as “common name” or “business name.”

Some candidates stand for election under their birth surname if they are scions of a well-known political family. Others use pen names or stage names.

There are probably more women who do this than men, but the law and regulations are gender-blind and there is no requirement for a specifically “Japanese” name.

When I naturalized, I took the surname of my wife, but I still do almost everything under my birth name. It is my understanding that I could stand for election under my birth name, although it might have to be written in katakana.

The provision for using your tsusho in this area, and most aspects of public life in Japan, is one reason I regard the issue of the same surname for married couples as not worth the attention it gets. My Japanese surname appears on my passport, driver’s license, insurance, and tax documents. Otherwise, I am free to use my birth name.

Conventionally, voting takes place in local public schools or other public buildings. The polling place admission ticket specifies where you should vote, but since 2016 it has also been possible to vote at common or shared polling stations (共通投票所), some of which have been placed in high traffic areas such as shopping malls, in an effort to raise voter turnout.

Provision is made for those who use Braille and those who have physical impairments, such that they cannot write names on the ballot papers.  Similarly, there is provision for those who are hospitalized, or who cannot physically travel to a polling place for other reasons.

Mobile polling stations are being used to counter this trend.

Because of the COVID-19 pandemic, special measures will be in place this year. For example, I vote in Kita ward in Tokyo. The ward web page asks people to disinfect their hands before entering, and to maintain social distancing at congested times.

Experience so far suggests that COVID-19 fears will lead to lower voter turnout. But whether this will favor some candidates at the expense of others is indeterminate.

An early voting system (期日前投票制度) was introduced in 2003. As currently administered, you can vote from the first day after the official election announcement up to the day before the election. 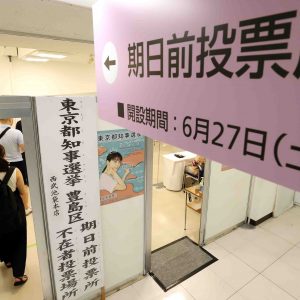 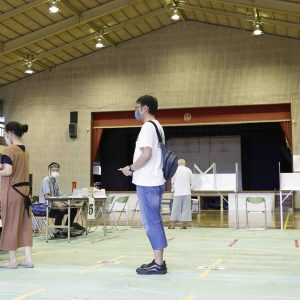 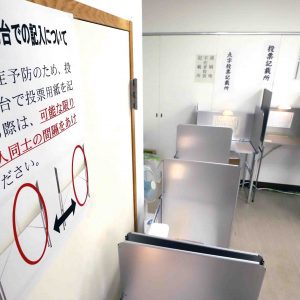 Vote counting is done both by hand and with machines.

Counting is open to the public, without prior application. The local electoral commissions that do the actual counting typically have a detailed description on their websites describing the steps involved and the multiple techniques used to prevent miscounting.

Unlike in the United States, challenges to the vote count and recounts in Japan are very rare, but not totally unknown. But, because Japan has a largely British-style parliamentary system with the prime minister chosen by members of the party holding the most seats in the lower house, a change in result due to a recount inherently has little overall impact.

Aside from our “primitive” but exceedingly reliable technology, another major difference between Japan and the U.S. (but not necessarily with European countries) is that we do not have voter registration, although there are registers of eligible voters managed by local government units.

If you are a citizen 18 years or older, you are registered to vote automatically, with no action necessary on your part. A polling place admission ticket is automatically sent to the address you have used for your resident registration (住民票). The only exceptions are people whose voting rights have been temporarily suspended for criminal convictions.

There is nothing in Japan comparable to the endless registration disputes in the U.S.

From time to time the issue of voting rights in national elections arises. Typically, the English-language press coverage of this issue implies that Japan is an exceptional case because it does not give voting rights to permanent residents. This is nonsense.

In the U.S., permanent residents have been jailed for voting inadvertently. I have held permanent residency in the United Kingdom since 1993 and paid taxes there since 1989. I do not have local or national voting rights.

For more than three decades it has been relatively easy for anyone born in Japan to acquire citizenship, and especially easy for Koreans. Many Koreans have naturalized.

Those who do not hold citizenship are not being denied Japanese nationality; they are making a political statement.

This is explained by Erin Aeran Chung in her book Immigration & Citizenship in Japan (Cambridge University Press, 2010). A faction within the born-in-Japan community rejects the idea of birthright citizenship on the grounds that automatic citizenship would deprive them of their ethnic identity.

The overall electoral system in Japan is not without problems, including low voter turnout and disparities in the weight each individual vote carries, depending on location. But, based on my experience as a voter in the U.S., I would rate the Japanese system as much better in giving citizens a chance to vote, with the expectation that there will be an honest and timely vote count.

By comparison, just weeks ago, new electronic “ballot marking devices” costing $107 million USD in total were used in a Georgia state election, resulting in some people standing in lines for as long as seven hours, waiting to vote.

The technology in Japan for casting ballots and counting them may be retro, but, as is said in computing, “If it’s not broken, don’t fix it.” Introducing new technology just to be up to date in appearance generally leads to chaos.