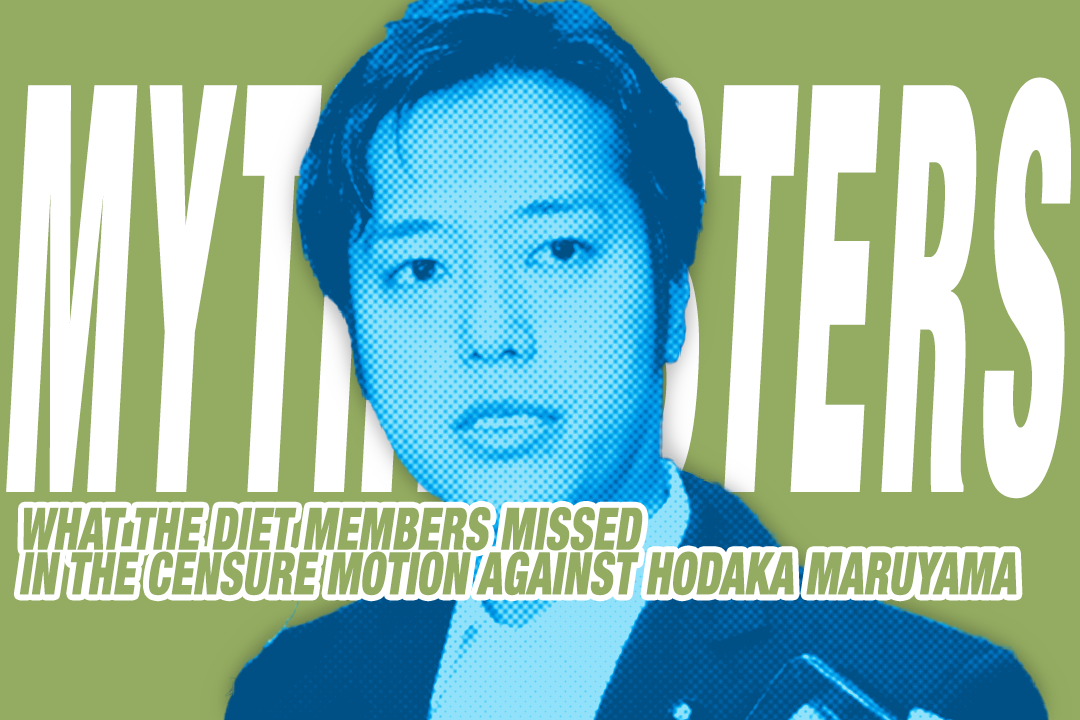 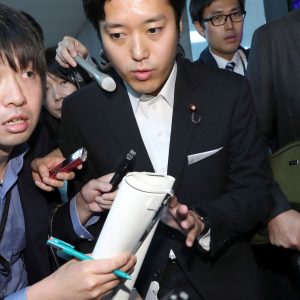 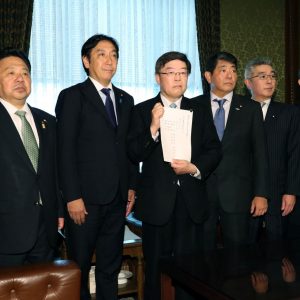 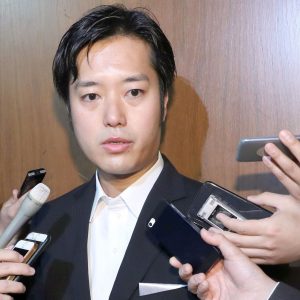 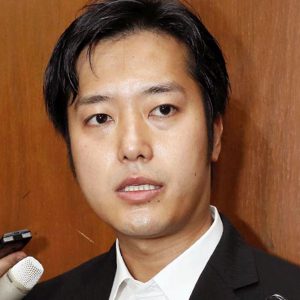 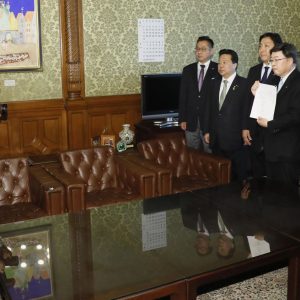 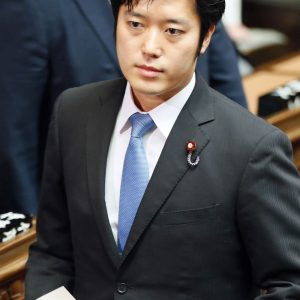 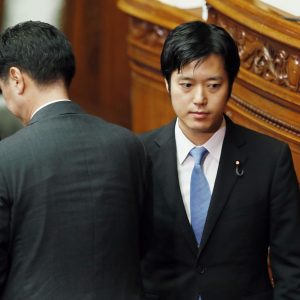 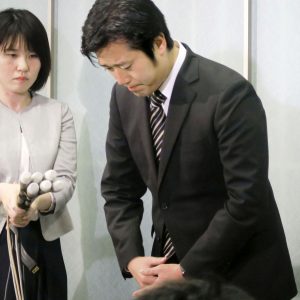 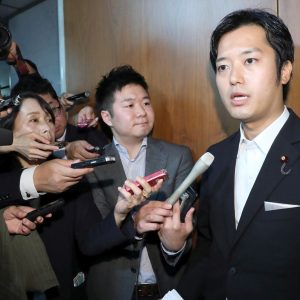 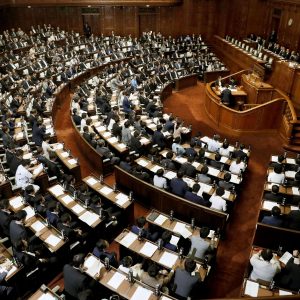 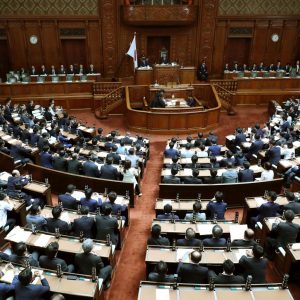 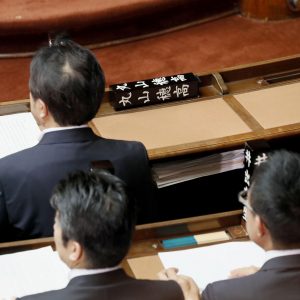 On June 6, the lower house of the Japanese Diet (Parliament) voted unanimously to censure its member Hodaka Maruyama for remarks he made during a visit to the Russian-held island of Kunashiri. These visits are part of a Japanese government-sponsored program of “people to people” diplomacy that seeks the return of Kunashiri and three other Russian held islands to Japanese control.

As reported, after drinking at least 10 glasses of cognac, Maruyama interrupted a question-and-answer session between the leader of the Japanese delegation and accompanying reporters with comments generally interpreted as suggesting that, without war, the islands would never be regained.

He also tried to leave the compound where participants were staying, in violation of the agreement governing these visits, and talked of wanting to buy and grope women.

The non-binding resolution called upon Maruyama to resign, something he has not done as of this writing.

Despite a number of witnesses, there seems to be a wide discrepancy and no definitive quote in Japanese or English reports of what he said, adding a further level of uncertainty.

As the Japan Times reported the incident, he asked a former resident, “Do you think there is any alternative to war [to recover the islands]?”

The Japan News (owned by the Yomiuri newspaper) quoted him as saying, “Don’t you think nothing can be done without a war?”

The Asahi newspaper (English edition) stated, “Maruyama said that the only way for Japan to take back the four islands was to wage war against Russia.

UPI (United Press International) said, “Friction between Japan and Russia is rising after a Japanese lawmaker urged other politicians to declare war against Russia to ‘regain’ the Kuril Islands.”

The Shingetsu News Agency (aka Michael Penn) reported that Maruyama was “under fire after suggesting that the only way that Russia might return the four islands of the Northern Territories would be if Japan launched and won a war against Russia.”

The Japan Times and Yomiuri reports are a reasonable approximation of Japanese language reports of what Maruyama is alleged to have said. The Asahi statement is on the cusp of being fake news. The SCMP, UPI, and Shingetsu News Agency reports are explicitly fake news.

The Diet resolution censuring Maruyama stated that the issue was his statements were “a violation of common sense” and “a great deviation from the abandonment of war and pacifism that are the essence of Japan.”

The motion also declared that Maruyama’s actions and statement had harmed Russo-Japanese relations.

There may be more, however, behind the resolution censuring Maruyama than the nominal reasons stated in the text.

Philip Brasor in a Japan Times commentary piece may have inadvertently hit upon what is really behind the flap. “It is taboo in Japan for anyone, including media organizations, to accept the idea publicly that the islands will never revert to Japanese sovereignty.”

This same editorial goes on to note that to curry favor with Russia, Japan has made “an enormous amount of investment” in the Japanese-claimed territories under Russian control and runs an expensive exchange program to send Japanese to the territories and to bring Russians to Japan. Despite the investment, the exchange program, and numerous meetings between Prime Minister Shinzo Abe and President Vladimir Putin, no real progress has been made. Brasor concludes, “No wonder Maruyama was frustrated.”

Whether Brasor is correct is open to question, but given other “gaffes” by other MPs in recent years — “gaffes” that did not lead to censure — it is hard to explain the reaction to Maruyama without looking for something above and beyond his actual conduct.

Endorsement of the Censure Motion

The censure motion was almost universally endorsed by the press, at least as reported in English. Japanese language reporting was somewhat more equivocal.

The Japan News (Yomiuri) editorialized, “If Maruyama does not follow the resolution [and resign], it will erode the dignity of the lower house.”

The Asahi (English edition) called for an even stronger statement: “Lacking common sense as a politician and incapable of self-discipline, Maruyama can only be judged unfit to sit in the Diet. But he has indicated his intention to stay in politics as an independent. If that is the case, we believe the Lower House should move to demand his resignation.”

Mainichi newspaper (English edition) gushed, “[T]he fact that the lower house was able to declare its position on the issue is worthy of praise.”

Of the many endorsements of the censure motion, that appearing in the Asahi was singularly bizarre: “In Japan, a self-proclaimed pacifist nation, any Diet member who appears to justify war as a solution to territorial disputes simply is not qualified for the job and should resign at once.”

This is bizarre because there was no decision by “Japan” or the Japanese people to become a “pacifist nation.” The 1947 Constitution with its famous Article 9 stating “the Japanese people forever renounce war as a sovereign right of the nation and the threat or use of force as a means of settling international disputes” was a creation of the American military occupation of Japan.

Further, Japan is not a truly “pacifist nation” to the extent that absolute pacifism would not allow for the very substantial military establishment that Japan possesses, something that clearly contradicts the second paragraph of Article 9, which states “land, sea, and air forces, as well as other war potential, will never be maintained.” The slated purchase of 105 F-35 aircraft from the United States is hardly consistent with “pacifism” as this term is most generally used.

If a Diet member can be disqualified for going against “self-imposed pacifism,” as asserted by the Asahi, that means the Asahi editorial writers believe there are free speech no-go areas. If Maruyama deserves censure for going against something enshrined in the Constitution, at least as interpreted by the Asahi, that means in practice that no debate on constitutional revision, even revision in a “progressive” direction, is possible.

Maruyama himself responded that (1) he did not say anything that deviated from the principles of the Constitution; and (2) his statement is protected as free speech.

A small number of observers agreed, including two Diet members who abstained: Shinjiro Koizumi and Toshitaka Ooka. Those who disagreed said — rightly, I think — that whether Maruyama stays in the Diet should be decided by the electorate. The two abstaining Diet members were reprimanded for their act of conscience.

This whole flap caused me, as a historian first and as a Japanese voter second, to think of one word and one incident. The word is kokutai (national essence). The incident was the 1940 expulsion from the Diet of the conservative Member of Parliament Takao Saito for questioning the “Holy War” in China.

Asahi editorials in particular made me think of the term kokutai and the infamous 1925 Peace Preservation Law. That legislation made even advocating changing the kokutai (国体の変革), which was never defined, a major crime — one which, after the 1928 revision of this law, carried the death penalty.

The “self-proclaimed pacifism” of the Asahi newspaper in its endorsement of Maruyama’s censure strikes me as a case of undefined kokutai (national essence) from the left as vague as the 1925 kokutai of the conservative and reactionary regimes of that era. The only saving grace is that the Asahi and those who share its thinking lack the repressive apparatus of the prewar and wartime Japanese state.

Precedents: The Expulsion of Takao Saito

In March of 1940 Saito Takao, a conservative member of parliament, was expelled from the Diet after giving a long and somewhat rambling speech in February 1940 in which he questioned the prosecution of the “Holy War” in China.

This speech is conventionally styled his “Reigning in the Military” speech. But it was actually directed at the civilian government led by Fumimaro Konoe and those he saw as supporting continued military involvement in what Saito saw as a no-win war in China.

Prominent among those supporting the continuation of the war were the “new bureaucrats” who had a Marxist-influenced reform agenda for Japan, along with many members of parliament associated with the Social Masses Party (Shakai Taishuto).

It was members of the Social Masses Party who led the movement to expel Saito. Its primarily skilled labor electoral base was enjoying prosperity from war material procurement contracts. Economic controls justified by the war in China were bringing many of the “socialist” measures that the politicians and intellectuals in the Social Mases Party advocated.

While there is no parallel whatsoever in content and style between what Maruyama did to get censured and what Saito did to get expelled, there is a very grave parallel between what the Diet at large did, and in particular what the liberal and left-leaning political parties did in both cases.

Conclusion: Judgment is the Job of the Voters

Only a few commentaries on the Maruyama case noted the Saito Takao parallel.

The most notable among them was the Nihon Keizai Shimbun, which wrote: “The expulsion of Saito Takao from the prewar Imperial Diet killed off political debate. As a reflection of this, even when post-war MPs have been guilty of crimes, the limit has been resolutions calling for resignation.”

Be that as it may, the Maruyama incident shows that, while the Diet may have learned, at least temporarily, not to expel its members that go against the prevailing wind, neither they nor most of the opposition have learned the greater lesson.

Unless treason or a felony is involved, who sits in the Diet should be decided by the electorate, not by Diet members who are not necessarily any more free from sin than Hodaka Maruyama.