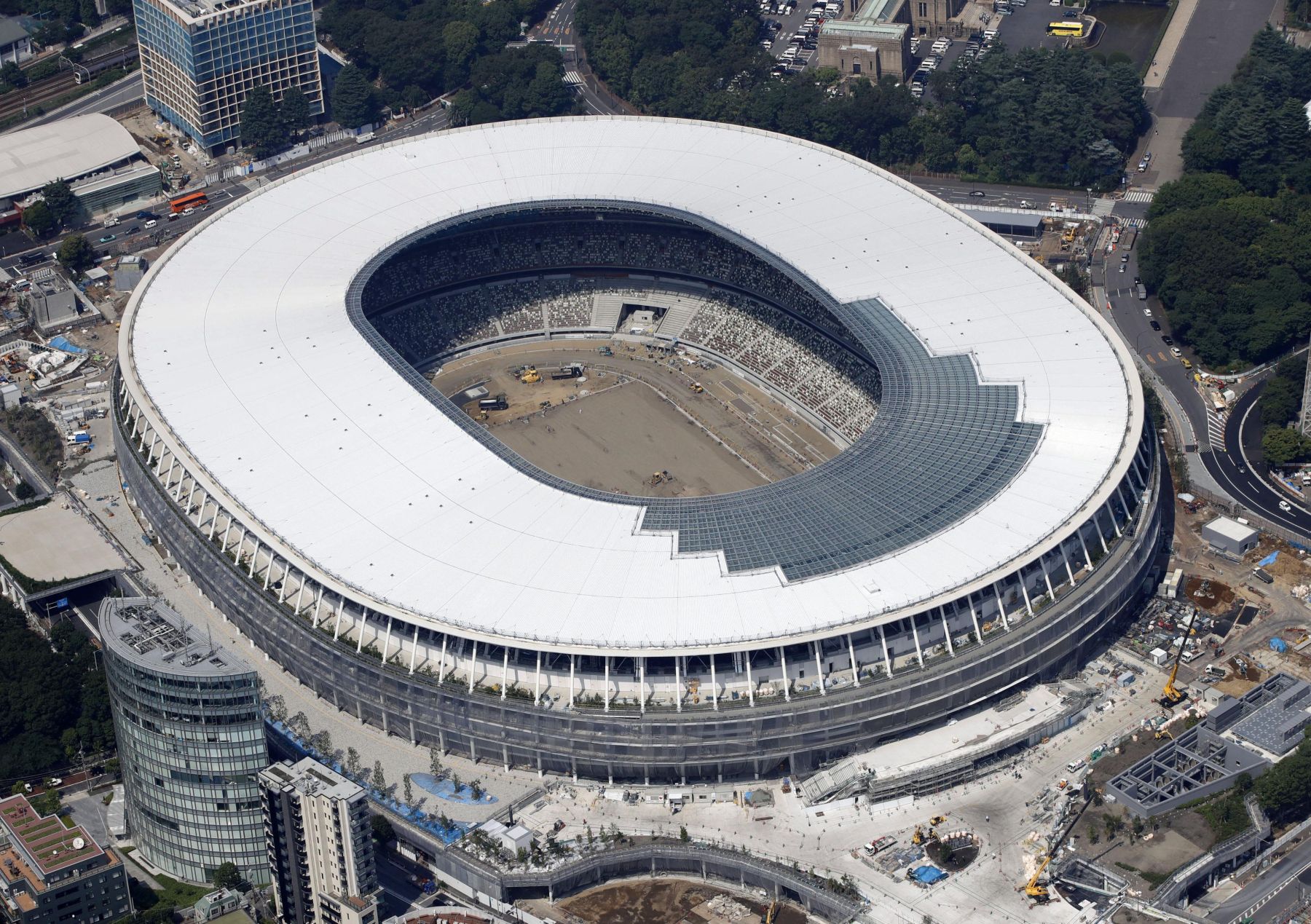 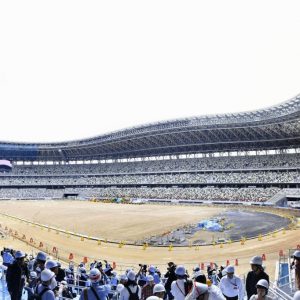 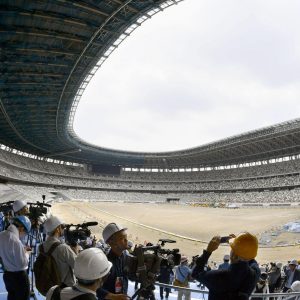 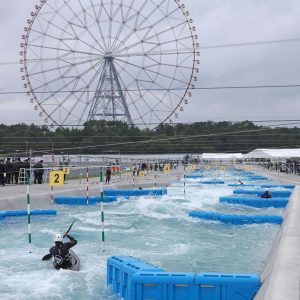 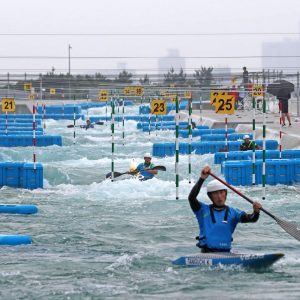 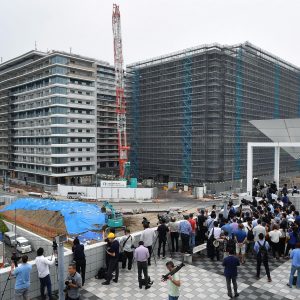 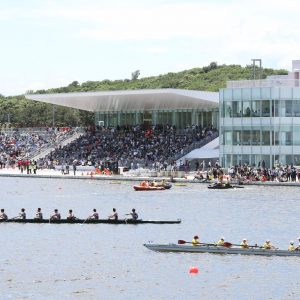 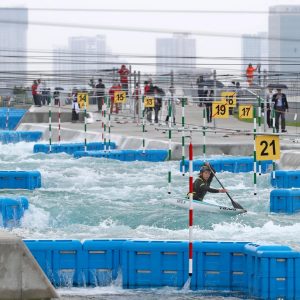 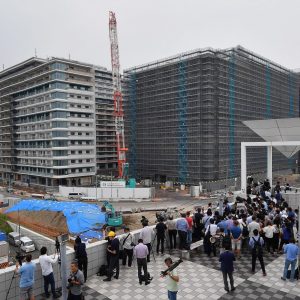 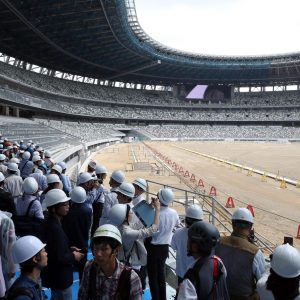 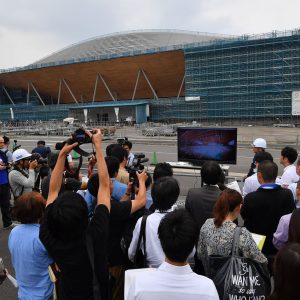 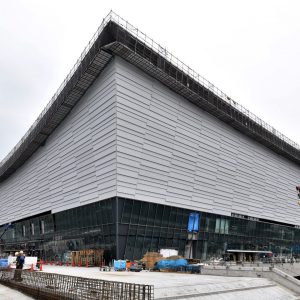 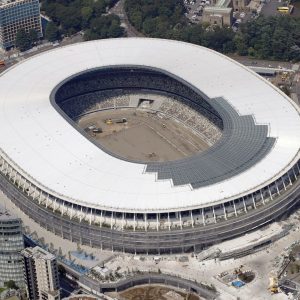 Just ahead of the one-year mark before the 2020 Tokyo Olympics and Paralympics, the construction site of the New National Stadium (Shinjuku Ward) was opened to the press on July 3.

The project has reached the 90% mark, and work has begun to put on the finishing touches before completion in late November 2019.

Other facilities, including the Olympic Village (Chuo Ward), where teams from countries around the world will stay, and the Tokyo Aquatics Center (Koto Ward), that will host swimming events, were also opened to the press.

The New National Stadium, with a capacity of 60,000 people, is to host the opening and closing ceremonies of the Olympics, together with track-and-field events and soccer. Approximately 45,000 of the seats have been installed, following a color scheme based on five “earth colors,” including white and grey. Large screens have also been set up above the stands.

The very tricky roof construction connecting steel beams and wooden components was completed in mid-May. Turf will be put down on the field in July, and construction of the track for track-and-field events is scheduled for August and September.

The completion ceremony for the New National Stadium is to be held in mid-December. An unveiling event for the general public is planned for December 21, complete with appearances by athletes.

The finals of the Emperor’s Cup soccer on January 1, 2020, will be the first sporting event to be held at the stadium.

The stadium is designed to allow evacuation within 15 minutes in the event of a natural disaster, regardless of where one is seated. When asked about the impact of weather and earthquakes on construction, a staff person in charge replied, “We’ve carried out painstaking safety management and put in place precautionary measures. We’ve had no major problems.”

Meanwhile, progress on the Olympic Village in Chuo Ward was also revealed to the press on July 3. It stands between 80 and 90%. The external façade is nearly complete and work on finishing touches has begun.

According to the Tokyo Prefecture government, the Olympic Village has 21 buildings that will provide a total of about 3,800 units. The structures range from 14 to 18 floors and completion is scheduled for December 2019. In addition to providing lodging for approximately 12,000 athletes during the Games, about 6,000 people from the Olympic committees of countries and regions around the world will also be accommodated.

A prefectural representative commented, “Progress is coming along well so far, and we will continue to focus on safety first as we work toward completion.”

Conversion into Rental Apartments After the Olympics

The Olympic Village will also offer the Village Plaza, a temporary facility containing cafeterias and a variety of shops.

After the Games, the village will be remodeled into rental apartments. The village will technically be borrowed from a private company during the Games, with rent totaling approximately ¥3.8 billion JPY ($35 million USD).

Although data falsification by a hydraulic equipment manufacturer necessitated the replacement of already-installed seismic isolators at the Aquatics Center, construction is expected to be completed on schedule in February 2019.

The roof and exterior walls of the Ariake Arena are also nearly finished. In an effort to shorten the construction period, the roof was built in nine separate parts using a method whereby each piece was slid on and attached to the top of the building.

Due to ongoing construction work, the interior of the Ariake Arena was not opened to the media on July 3rd.

Follow this link for other stories on the upcoming Tokyo Olympic and Paralympic Games.