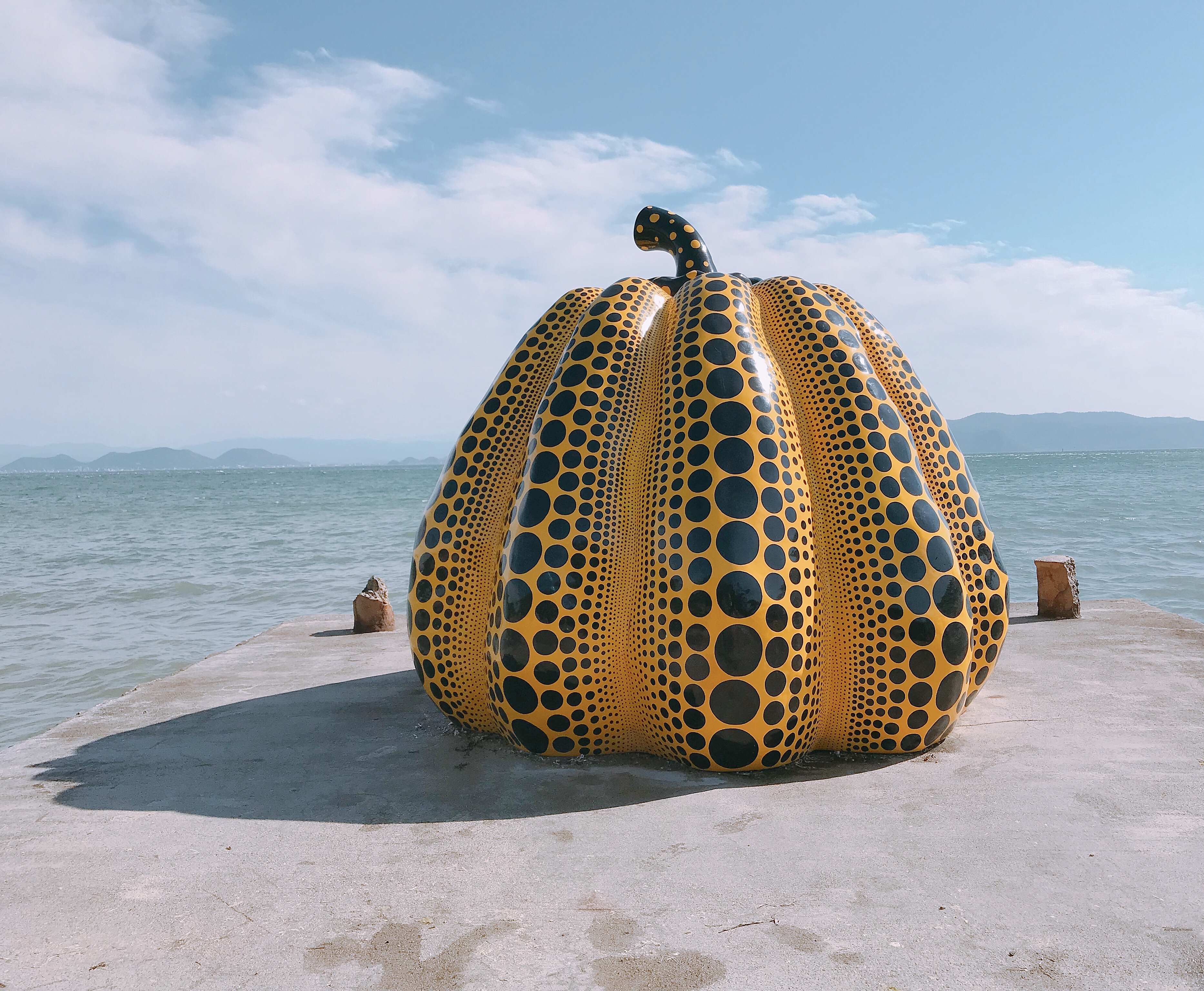 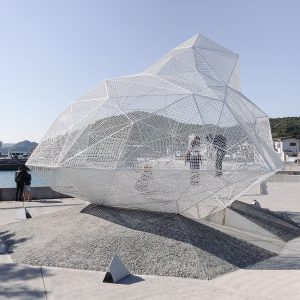 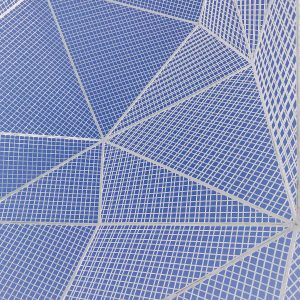 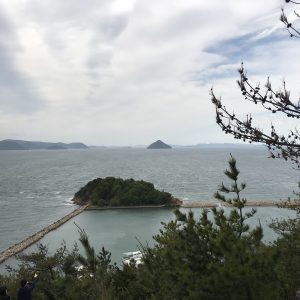 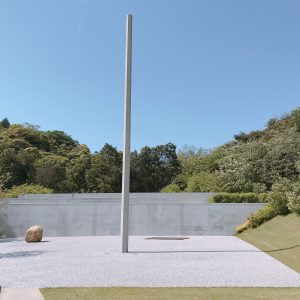 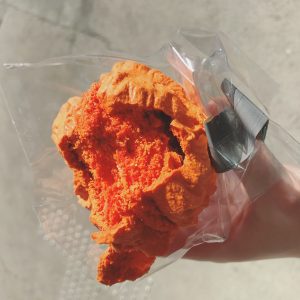 In the Seto Inland Sea, a large body of water separating Honshu, Shikoku, and Kyushu—three of Japan’s four main islands—lies the small island of Naoshima. And when I say it’s small, I mean it.

It is roughly 14.22 square kilometers (for those using the Imperial system, that’s around 5.5 square miles), so you could easily walk across the island in a day. The island’s population is rather small too. Dropping from around 8,000 people in the 1950s and 1960s to a little over 3,000 today.

This really isn’t strange for Japan, with island populations declining across the country for a variety of reasons, including: the shrinking national population and an ongoing exodus from rural areas to big cities. Putting this into perspective, there’s an island that’s (almost) entirely populated with dolls now.

Naoshima, however, wasn’t simply going to fade away.

Enter Benesse Holdings. This education and publishing conglomerate, based in Okayama Prefecture, held a sizable world-class art collection. It had the works of internationally-renowned painters like Claude Monet, Frank Stella, and Andy Warhol, in addition to many Japanese artists.

The former head of Benesse Holdings, Soichiro Fukutake, wanted a place to showcase this collection with people from all over the world. So, nearly 30 years ago, a large plot of land was bought in the southern part of Naoshima, the famous architect Tadao Ando was hired, and over the next couple of decades the small island began transforming itself into an international mecca for art enthusiasts, attracting over 80,000 for its Triennale Art Festival in 2017.

Having disembarked at Miyanoura Port, on the island’s west coast, I immediately saw Yayoi Kusama’s Red Pumpkin with her signature polka dots, which, along with similar piece—a yellow pumpkin (simply titled Pumpkin) sitting on the end of an old concrete pier—has become the unofficial mascot of the island.

From here, visitors can catch a bus, rent a bike, or just walk to any of the nearby museums. Or, if you decide to hang out in the station for some reason, the place has absolutely gigantic macaroons.

My first stop was Chichu Art Museum, which many consider as Ando’s masterpiece.

Open courtyards and skylights bring natural light into the underground museum—built into the mountain itself—which honestly reminded me of a James Bond villain’s secret base. Utilizing a minimalist aesthetic, Chichu plays with a visitor’s perspective. For instance, consider the museum’s Claude Monet Space, a lofty, pure white underground chamber that is made up of hundreds of thousands of tiny stone tiles. This contrasts with vivid blue and violet colors in the oversized paintings, while the number of visitors in the room is restricted, further emphasizing the feeling of epiphany.

Similarly, another piece in Chichu by James Turrell turns light itself into art. I slowly ascended a black granite step-pyramid, which appeared like a rectangular projection on a wall, only to discover it was an entrance into a room bathed in blue-ish light. As I wandered this vast space, the color that enveloped all seemed to change to a pinkish hue as your eyes adjusted to the lighting.

Walter de Maria’s Time/Timeless/No Time also uses lighting and space to create a religious or, perhaps more appropriately, otherworldly feeling. After walking through a dark concrete maze, I entered a massive well-lit room that reminded me of a mausoleum, lined with copper bars and, in the center, a colossal sphere of polished granite reposing on a flight of stairs. Images of the obelisk from Stanley Kubrick’s 2001: A Space Odyssey instantly came to mind.

Afterwards, I walked along a wooded trail, coming upon the Lee Ufan Museum. Featuring minimalist pieces of art, which organically combine stone and other materials, the museum showcases the collective works of contemporary Korean artist Lee Ufan, who teaches in Japan. As with Chichu, the building itself was designed by Tadao and mixes geometrically-shaped reinforced concrete with nature and open spaces to accentuate the artwork displayed inside.

The island has plenty of museums and sites for visitors to explore, like Teshima Art Museum, Benesse House, and Miyanoura Gallery 6. Generally speaking, you should give about one hour at each location—totaling around six hours. Of course, crowds can affect your wait times.

However, with the sun beginning to set over a backdrop of the Seto Inland Sea, I made my way back to the port, stopping at some of the many outdoor works along the coast, like Sousuke Fujimoto’s Naoshima Pavilion and Cultural Melting Bath, along the way.

Part of Naoshima’s enduring charm is that, despite becoming an international destination that attracts countless tourists, it remains a place where you can wander in near-complete isolation, appreciating the art, both human-created and natural.

How to Get to Naoshima:

Getting to Naoshima from Okayama City requires a 45-60-minute train ride on the JR Uno Line from Okayama Station, which costs about ¥580 going one-way. However, for those holding a JR Rail Pass, you’re covered here. Once you arrive at Uno Station, there’s a ferry terminal across the street with regular service to Miyanoura Port (the ride costs about ¥290 one-way and takes about 20 minutes) and less frequent service to Honmura Port.

Another option is Takamatsu Port, located in Kagawa Prefecture, from which it generally takes about 60 minutes to reach Naoshima—it’s only 25 minutes if you catch a high-speed passenger boat.