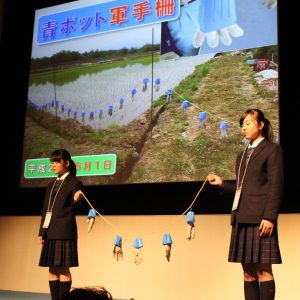 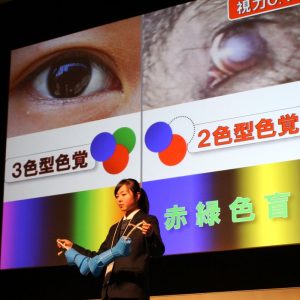 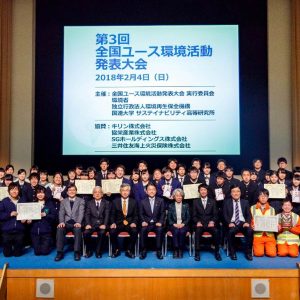 How can young people help ensure a sustainable society for themselves and the future generations? Some Japanese high school students’ groups came up with innovations that astonished specialists on the panel at the Third National Youth Environmental Activity Presentation Contest held early in spring in Tokyo.

The contest was co-organized by the Ministry of Environment of Japan, the Environmental Restoration and Conservation Agency, and the United Nations University’s Institute for the Advanced Study of Sustainability.

Twelve out of 100 high schools across Japan, from Hokkaido to Kyushu, were selected for entry into this year’s contest.

PREVENTION AND CONTROL OF WILDLIFE DAMAGE

Tone Vocational Senior High School, Gunma Prefecture: Students from the Bioresource Club developed a method to prevent wild boars from intruding onto farmlands. They focused on the animals’ chromatic senses.

Wild boars do not recognize colors other than the color blue, so the students realized that trying to fend them off with anything red would be pointless. Instead, they hung along the farm fences blue gardening vinyl flower pots, which successfully deterred boar intrusions.

At the same time, the students’ method was successful in eliminating nighttime intrusions by adding blue LED lights along the fence lines. Their strategy was efficient and effective at a low cost. (Special Award selected by teachers)

Toyama Prefectural Central Agricultural High School: A Small Animals Study Club enclosed a plot of deserted cultivated land with double fences and planted the farmland in the innermost enclosed area. Goats were placed to roam free in the grass pasture corridor between the double fences, which kept deer and monkeys from invading the farmland.

Thus, feeding was also taken care of, with the grass corridor serving as a “belt farm” providing the goats with forage. The club also trained “monkey dogs” to scare off monkey invasions. (Outstanding Performance Award)

Saya Senior High School, Aichi Prefecture: The Study of the Farming of Call Ducks Club formerly released regular ducks into paddy fields for cultivating rice. However, by replacing regular ducks with call ducks, which are a much smaller breed, they were successful in furthering rice cultivation without the use of pesticide and chemical fertilizer. (The Environmental Restoration and Conservation Agency Director Award）

Sanyo Girl’s Junior & Senior High School, Okayama Prefecture:  For many years, students from the History & Geography Club had been reporting results on their research and collection of marine waste scattered in the Seto Inland Sea. Their most recent project was a coastal cleanup on Teshima, an island with a population of just 70 people.

Through the project, the students presented a study on the origin and circumstances of marine debris impacting the islands in the area. (Outstanding Performance Award)

Tonoryokuho High School, Iwate Prefecture: A technique for making Japanese paper using locally grown hops vines was developed by the students of the Study of Plants and Flowers Club.

The vines, which used to be incinerated as waste, are now being commodified, following the students’ five-year effort to successfully produce 100% non-bleached Japanese paper out of the vines.

The paper was used for making products like lampshades and diplomas for elementary schools, and now the paper has paved its way to becoming a local specialty product. (Minister of the Environment Award)

Hokkaido Shihoro High School: In regard to biodiversity, students from the Environmental Club conducted research on the Tokachi oak forests. They figured out that by controlling the growth of Sasa nipponica, a bamboo type plant that covers the forest floor, they could be more effective in achieving conservation and recovery of diversity in the forests. (Outstanding Performance Award)

The club also aims to find solutions for the extermination of apple snails, which are highly invasive and cause damage to rice crops. (Outstanding Performance Award)

Tanabe High School, Wakayama Prefecture: Students in the Biology Club are conducting research and experiments to eliminate and control the spread of African clawed frogs, an invasive alien frog spices impacting the ecosystem and breeding in the farm ponds scattering around the local peninsula. The activity is deemed valuable in order to deepen knowledge of the species. (The UNU-IAS Director Award)

HARNESSING THE BENEFICIAL FUNCTION OF PLANTS

Nakui Agricultural High School, Aomori Prefecture: TEAM FLORA PHOTONICS worked on a project with SunPatiens, a plant known for their beautiful flowers and excellent water-purifying qualities. A symbiosis between mycorrhizal fungi and the roots of SunPatiens allows enhanced absorption of phosphoric acid and ammonia nitrogen.

Taking the knowledge gained from their research, the students were able to immerse pots of the plants in park ponds, thereby preventing water pollution throughout the ponds. Their project achieved creation of BioEngine—a water purification system operated with the power of organisms. As a consequence of their clean-water project, pond water was purified while the waterfront was simultaneously transformed into a bed of flowers. (Outstanding Performance Award)

REACHING OUT TO OVERSEAS COMMUNITIES

Tokushima Commercial High School: As for business development ideas, a project led by the Business Research Club stood out from the crowd. The club joined forces with high school students in Cambodia to produce commodities such as ice-cream. The products were made in a factory built on the school premises in Cambodia with grants from the Japan International Cooperation Agency.

The students’ business sense on a global level was honed through cross-cultural interactions with the Cambodian students. (Special Prize Award selected by high school students)

Kamagaya Nishi High School, Chiba Prefecture: The students in the Kamanishi Freshman, Class 2, introduced a rather metropolitan point of view in their challenge. Through their project of collecting clothes for donation and delivering them to refugees, the students were able to engage in the development of an important skill—to be able to take thoughtful actions with a global perspective. (Outstanding Performance Award)