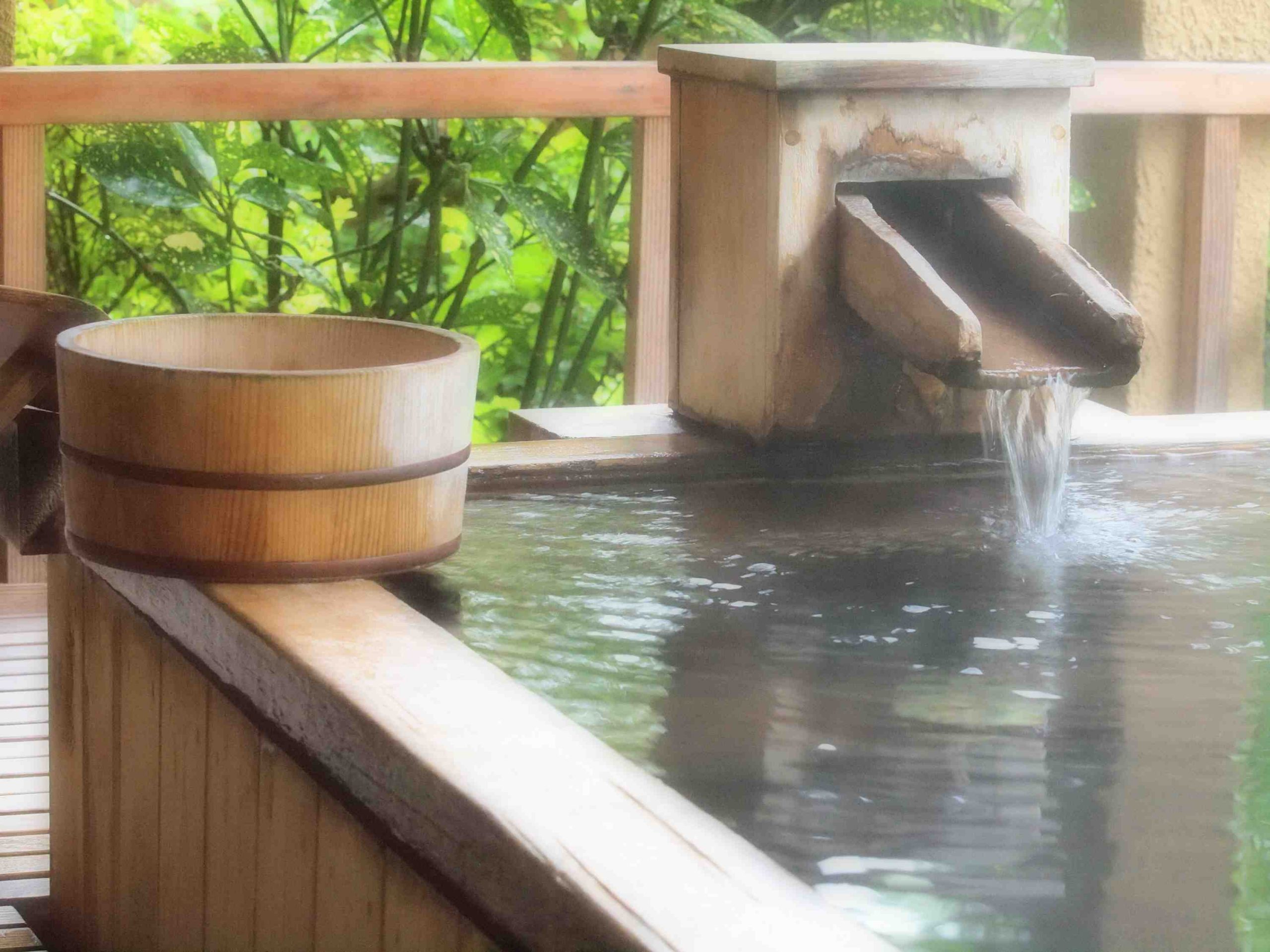 As the winter chill continues, this is the time I most feel like soaking in a hot spring, despite the COVID-19 pandemic. While there are famous hot spring resorts in the Kansai region, such as Arima Onsen in Kobe and Shirahama Onsen in Shirahama, Wakayama Prefecture, facilities touting “natural hot springs” are becoming conspicuous even in cities like Osaka.

In fact, hot springs have been proliferating recently in urban areas. Surprisingly, Osaka Prefecture ranks third in the number of hot spring sources found in the Kinki (Western Japan) region, after Wakayama and Hyogo prefectures. This surprising data called for an investigation.

In the evening of January 20, I found myself visiting the Solaniwa Onsen  (aerial garden) Osaka Bay Tower, located in front of JR West’s Bentencho Station in Osaka’s Minato Ward, on the corner of an area forested with high-rise buildings.

The hot spring facility opened in February 2019 under the banner of “Kansai’s Largest Hot Spring Theme Park”. It draws natural hot spring water up from about 1,000 meters (3,280 feet) below ground, which serves nine kinds of baths, including open-air terraced baths, carbonated and four season springwater baths.

The main target customer market has been company employees on their way home from work. However, users are currently sparse, due in part to the trimmed business hours requiring the facility to close at 8 p.m., three hours earlier than usual, because of the COVID-19 state of emergency declaration. One knowledgeable source also noted, “The facility attracted a lot of customers from abroad before the COVID-19 crisis, but their numbers have lessened drastically.”

There are many facilities featuring hot springs in Osaka now. The hotel chain Super Hotel Osaka, for example, provides customers with hot spring baths at six of its 10 venues in Osaka Prefecture. Hot spring water is pumped out from about 1,000 meters beneath the surface of the ground at the chain’s Nishi Ward branch, and then distributed to the remaining five in a practice referred to as “hakobiyu,” or hot spring water conveyance.

Another hotel chain, Dormy Inn Premium, which has seven branches with hot springs in the Osaka area, also uses its own springhead in a neighboring area, then carries the hot spring water to its hotels.


Geology is the Key

At one time the number of hot springs had grown rapidly in Osaka Prefecture. However, hotel operators and other commercial establishments have been in a quandary because of the COVID-19 plague.

According to the Ministry of the Environment, there were 105 hot spring sources in the prefecture in fiscal 1998, and the number peaked at 176 in fiscal 2007. The number decreased slightly to 155 in 2018, but is still the third largest in the Kansai region, after 498 in Wakayama Prefecture and 441 in Hyogo Prefecture, both of which are nationally famous for their spa resorts. Compared to other urban areas, the number of hot springs in Osaka far exceeds that of Aichi Prefecture, and has long outnumbered those in Tokyo.

Why are there such a large number of hot springs in Osaka? The answer to this lies in Osaka’s geology.

In Japan, the Hot Springs Law defines hot springs as water or steam containing certain amounts of such specified substances as sulfur and radon, or whose temperature is 25 degrees centigrade or more at the collection point.

According to the Osaka prefectural government, hot springs coming out from underground in the Osaka region do not contain large amounts of the specified substances. Instead, most of them are classified as “simple hot springs” with waters measuring 25 degrees C or more at their springheads. This has something directly to do with the “geothermal gradient”, or rate of rise in geothermal heat.

Generally, geothermal heat levels rise by two to three degrees C every 100 meters in depths from ground level. In Osaka Prefecture, however, there are many spots where geothermal gradients are higher than elsewhere, reaching just under four degrees C every 100 meters. One prefectural government official noted the , “high possibility of hot springs with temperatures of about 40 degrees C becoming available by drilling to a depth of around 1,000 meters.”

According to the Osaka-based Geo-Research Institute (GRI), which is familiar with Osaka’s subsurface structure, rainwater, and other moisture that permeates the gravel strata to about 1,000 to 1,500 meters below ground in the prefecture’s lowland areas, is believed to be geothermally heated to become warm water. The Philippine Sea plate that slips under the Japanese archipelago in the Kinki region is thought to be involved in the formation of hot springs.

RELATED: [Hidden Wonders of Japan] There Are ‘Yokozuna Sardines’ in Japan’s Deepest Bay

The Osaka prefectural government, for its part, set regulatory standards calling for businesses to refrain from new drilling activities within a radius of 800 meters from hot spring sources that have already been discovered, effective from fiscal 2008, in order to protect existing hot springs and prevent drilling accidents such as gas explosions. As a consequence, the pace of once-booming hot spring development projects in urban areas such as Osaka has begun to calm down.

(Find access to the report in Japanese at this link.)