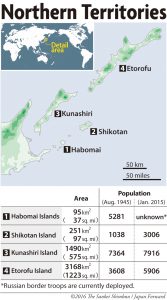 According to sources, the area of the existing garrison in Kunashiri is being expanded with the addition of infrastructure such as water and heating, together with weapons hangers, barracks, and other facilities rapidly being constructed. The “Baru” missile appears in images with a number of carriages mounted with eight missiles each.

The Russian 18th Machine Gun Artillery Division is stationed in the islands of Kunashiri and Etorofu with an estimated 3500 members. A new garrison is also being set up in Etorofu and Russia is planning to build 392 new military facilities on two islands.

Last November, it was already clear that the Baru, with a range of 130 kilometers, was in place in Kunashiri and in Etorofu the Bastion land-to-ship missile, with a maximum range of 300 kilometers, was positioned.

Following the summit between Japan and Russia last December, there was much discussion about joint economic activity in the Northern Territories, but Putin’s administration has not softened their attitude to the Northern Territories. In this military buildup, as well as this check towards Japan, the Strategic Submarine Ballistic Nuclear Submarines glower from their base over the Sea of ​​Okhotsk, with the aim of strengthening the defense of the straights.

The Japanese government protested the Russian military land-to-ship missiles in the Northern Territories as soon as their placement was reported in November. Concern was also expressed on March 20th, at the cabinet level joint meeting of foreign and defense ministers (2 + 2). Japan, with declared sovereignty over the four northern islands, said it could not accept the increased military presence, referring to the living quarters and other military related infrastructure.

Ryosuke Endo is Moscow bureau chief of the Sankei Shimbun