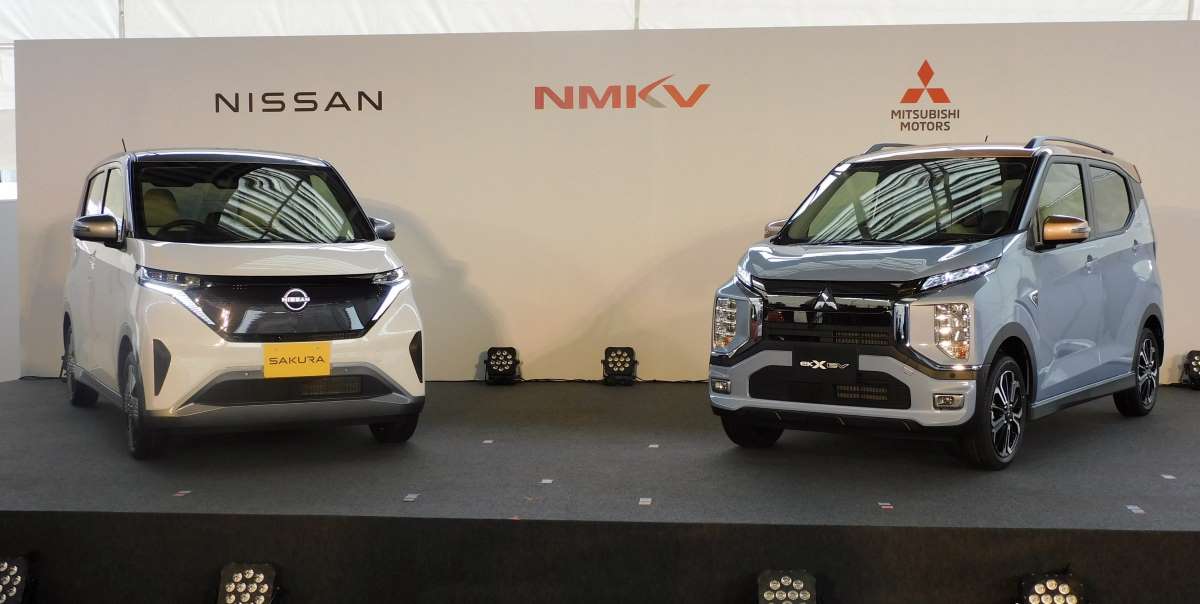 Electric vehicles (EVs) are becoming widespread in the Japanese market. The year 2022 has even been called the “inaugural year for EVs.”

New models have also made an appearance and are attracting attention. These are “kei cars” (Japanese minicar) EV released by Nissan Motor and Mitsubishi Motors on June 16.

The cars are popular not only for their low prices but also for their low maintenance costs, including taxes, and now occupy nearly 40% of the new car market in Japan.

Despite the high level of ownership, production of Mitsubishi Motors’ “i-MiEV” series was discontinued in March 2021, and mini EVs produced by major manufacturers disappeared from the market. However, in order to progress in the decarbonization of automobiles, it was considered essential to address the position of these kei cars that make up 40% of the market.

Nissan’s “Sakura” and Mitsubishi’s “eK X EV” were introduced to fill the gap. They are sibling cars for which Nissan took the lead in planning and development, and Mitsubishi the lead in production using Mitsubishi Motors’ Mizushima Plant in Kurashiki City, Okayama Prefecture.

There are some recent fully-equipped kei car models that are priced at about ￥2 million JPY ($14,500 USD), so this is a big selling point.

In order to reach this sales price, both companies have made a clear departure from the direction of conventional EV development.

Until now, automobile companies had been working to extend the cruising range, which has been an issue for EVs. There are some current models that have cruising ranges beyond 500 kilometers.

However, when a battery with large capacity is used to extend the driving range, the price inevitably increases. The two companies concluded that kei cars are often used for city driving, and prioritized leaving the cruising range at 180 kilometers to keep prices down. It can be said that this represents a new direction for EV development.

As expected for the kei car standard, the Sakura doesn’t produce tremendous acceleration. But the torque, which indicates the driving force, is about twice that of the Dayz, so there certainly is no feeling of powerlessness.

Stepping on the gas pedal, the ride smoothly accelerates to over 100 km/h, which is characteristic of EVs. Unlike the engine of the Dayz, which gets louder as the speed increases, the interior of the Sakura stays quiet.

I felt the biggest difference between the two in the stability of the drive. For the Sakura, the heavy battery is placed under the floor, which lowers the center of gravity and improves driving stability. The feeling of vibrations coming from below when driving on uneven ground was considerably reduced, also an effect of lowering the center of gravity.

In fact, the Sakura uses the Dayz as a base. The current Dayz, which was remodeled in March 2019, was designed so that the battery could be placed under the floor.

It can be seen that both companies have made thorough preparations for the introduction of mini EVs.

Honda, Suzuki, and Daihatsu have also moved forward in developing mini EVs, but their entrance into the market will be in two years at the earliest. Meanwhile, Nissan and Mitsubishi will have the Japanese mini EV market to themselves.

“I am confident that it will be a game changer for electric vehicles in Japan,” said Nissan President Makoto Uchida when he announced the mini EV on May 20, showing confidence in its commercial value.

However, if these models pack the latest functions into a compact body and keep the price down, there must be demand in overseas markets as well.

The vehicles were developed with domestic needs in mind and the companies have said that there are no plans to bring them overseas. Nevertheless, is it possible to aim to make these vehicles a game changer in overseas markets?

Mitsubishi Motors formerly supplied the European model of the i-MiEV to the French automobile giant Peugeot Citroen Group (currently Stellantis) on an original equipment manufacturer (OEM) basis. Akira Nagai of Nissan Automotive Technology Co., Ltd., who was involved in the development of the Sakura, has recognized that this mini EV also “has overseas demand.”

Even in the Southeast Asian market, where Japanese cars have an overwhelming share, shifts to EVs are beginning to emerge. Taking this opportunity, for instance by announcing factory construction plans, Chinese and Korean manufacturers are taking the lead in EV sales in Asia, and Japanese carmakers are being left behind.

Kei cars that have evolved with a standard unique to Japan are sometimes ridiculed as “Galapagos cars,” (meaning that they developed in isolation to the rest of the world). But models based on Japan’s kei cars are sold in Asia.

It would be beneficial for both companies to rethink their strategies for EVs overseas, for example by developing locally-designed kei cars that match the market. It cannot be good to sit on the sidelines as Chinese and Korean manufacturers move forward.