The recent news of Otto Warmbier’s death has shocked the United States and the rest of the world—except for Japan. Sadly, Japan has long understood, from firsthand experience, the brutality of North Korea.

Forty years ago, North Korean agents, under the direct leadership of then-Supreme Leader Kim Jong-il, fanned out across the Sea of Japan, hunting for human prey. They managed to bring back dozens, possibly hundreds, of Japanese abductees to North Korea, where they were forced to work for the regime and deprived of their freedom, their families, their dignity, and their hope.  As Charles Jenkins, a US Army soldier who defected to North Korea and who was later released along with his wife, Japanese abductee Hitomi Soga, said, North Korea is “a giant, demented prison; once someone goes there, they almost never get out.” 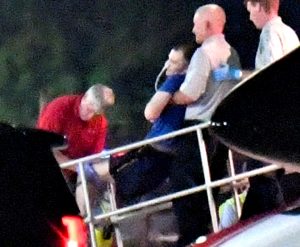 In 2017, Otto Warmbier was returned to his mother and father in a comatose state. The North Koreans said he had contracted botulism and taken a sleeping pill. Warmbier’s American doctors strongly suspect that he had been beaten into permanent unconsciousness.

The similarities between Warmbier’s case and that of Megumi Yokota are striking. Yokota was abducted by North Korean agents in Niigata in 1977, exactly 40 years ago last month.

While Yokota has yet to be located, the North Koreans claimed some 15 years ago that she was dead. They produced a box of charred bones—later identified as belonging to animals and at least one other person—and a death certificate that was so clearly forged that the lines used to cross out the original information were still plainly visible. Like Warmbier, Yokota was the subject of an obvious lie.

Many have concluded from these two cases that North Korea is incompetent. It is unable to forge a death certificate any better than a schoolchild might attempt. It is unable, even, to comprehend that real doctors would be able to tell the difference between botulism—a strong poison with unmistakable side-effects—and vicious beatings. North Korea, the common view holds, is clownishly inept. North Koreans may be developing ballistic missiles and nuclear warheads, we often hear, but their leaders, especially the portly Kim Jong-un, are to a man too buffoonish to know what to do with them.

This is a mistaken view.

North Korea is the most dangerous nation on earth. It sits directly atop the trigger of a guaranteed world war. If North Korea makes a false move, then China and the US will be drawn into a conflagration not seen since the closing days of 1953.

North Korea has spent nearly seven decades beneath this Sword of Damocles. The North Korean government has used the endless state of emergency to brutalize its people. The leadership of North Korea is highly skilled in cruelty, and the return of Otto Warmbier, far from being the “humanitarian action” the North’s diplomats claim it to be, was in reality a threat to the US and the world as to what to expect from any encounter with Pyongyang.

Like the ongoing sadistic joke the North is playing on the Yokota family, stringing them along with endless mirages of promised reunions and bureaucratic delays, Warmbier’s half-dead body, shoved on a plane and sent back to his mother and father, was a propaganda poster written in giant font: THIS IS HOW WE DEAL WITH OUTSIDERS.

We underestimate North Korean depravity at our own peril.

China’s record is even worse

But there is another, even more important, way in which the mainstream view of North Korea is incorrect. Nearly every expert in East Asian security understands, rightly, that North Korea is a client state of the People’s Republic of China. Without Chinese sponsorship at the highest levels, North Korea would quickly be forced out of business. Materially, psychologically, diplomatically, strategically, militarily, China is actively propping up the Kim dictatorship.

The extent to which North Korea understands its reliance on China was revealed earlier this year, when North Korean agents in Malaysia assassinated Kim Jong-nam, Kim Jong-un’s half-brother and a potential rival claimant to the Pyongyang throne. Kim Jong-nam was widely believed to have been kept in pectore by the Beijing leadership, in preparation for the day when Kim Jong-un could be replaced by another member of the Kim family.

However, these squabbles should not distract us from the reality that hardly anyone is admitting: North Korea and China are not allies. They are mirrored dictatorships, Siamese twins of cruelty and brutal repression. These twins share the same heart—atheistic communism.

China and North Korea are not separate countries. They are dual manifestations of the same nightmarish ideology.

It is misleading to the point of irresponsibility to focus on the grotesqueries of North Korea without pointing to the atrocities of the People’s Republic of China, which dwarf the horrors of the Hermit Kingdom in both ruthlessness and numerical magnitude.

North Korea may keep hundreds of thousands of innocent people locked up in inhuman conditions in a gulag archipelago. But Pyongyang has yet to find a way to compete with Beijing’s bloody invasion of Tibet, its equally bloody attempt to wipe out Tibetan religion, language, and culture, and its demonization of the Tibetan government in exile in northern India.

This is to say nothing of Beijing’s having forced millions of perfectly healthy Chinese women to obtain abortions, often just days before going into labor. It is also to say nothing of Beijing’s routine arrests and torture of Christians and practitioners of Falun Gong; its detention and beating of journalists and dissidents; its murderous suzerainty over Xinjiang, Inner Mongolia, and Manchuria; its crushing of the independence of Hong Kong; and its designs on the last outpost of Chinese freedom in Taiwan.

It is also to say nothing of Beijing’s own program of abduction. The Guardian reports that child trafficking in China is exploding, while other news outlets are beginning to report on the “disappearings” of wealthy Chinese citizens. Countless foreigners, including Americans, languish in Chinese prisons, awaiting trials. Some spend years in bare cells before ever even being given a day in court.

And these are just the contemporary issues. Conservative estimates put the number of Mao-era dead in the tens of millions. Tiananmen Square was nearly 30 years ago, but since then repression has only gotten worse.

Contempt for human life and human freedom is not genetic. It is ideological. The biggest threat to happiness and prosperity in Asia remains the same as it was a hundred years ago. Not Pyongyang. Communism.

In speaking of North Korea, we must not—cannot—leave out the much worse crimes of the People’s Republic of China. The two are a package deal, and attempts to isolate one from the other, even for strategic purposes, are doomed to fail.