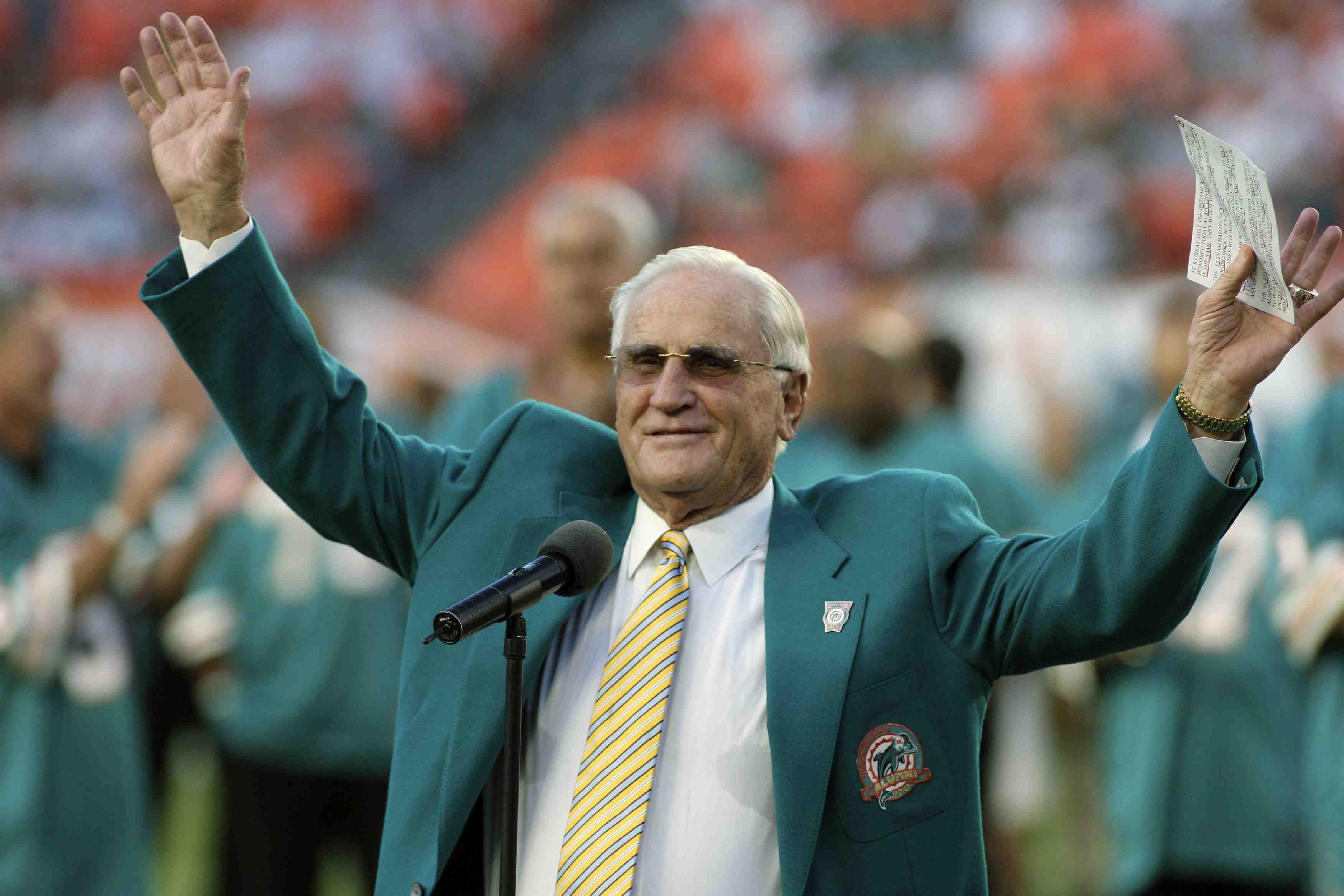 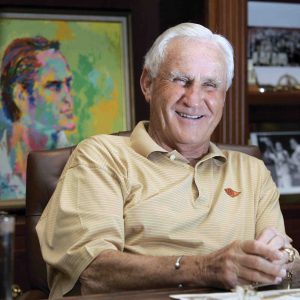 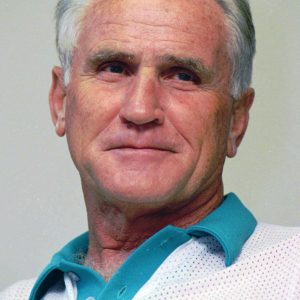 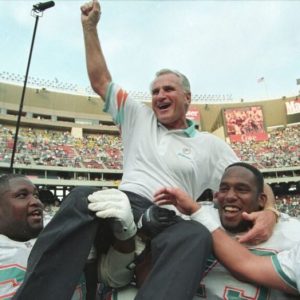 Coaching legend Don Shula died on Monday, May 4, at his South Florida home. He was 90.

It was only one football game, but it was a memorable trip in a lifetime of remarkable achievements on the gridiron.

Like so many other contests, this American Bowl, which was held on August 4, ended with the legendary leader walking off the field as a winner.

The game began at 9 A.M. Tokyo time to accommodate the Saturday night prime-time TV audience in the United States.

“To come all this way and lose the game would have been a real disappointment,” Shula, the NFL’s all-time winningest coach (347 victories), told reporters afterward. “It was a nice evening. I enjoyed my stay.”

He added: “We hope that this will be the start of a good year, and that the Super Bowl will be the end of the year.”

An announced crowd of 51,122 was at the Tokyo Dome to see Dolphins star quarterback Dan Marino, a future Hall of Famer, and his teammates compete against the Raiders.

“You never know what to expect from a rookie,” Shula said of Miller.

Which is why Miller’s effort pleased Shula.

And then the great coach and his team prepared for the return portion of their 14,912-mile (23,998.5-km) round-trip journey to Florida.

The victory at the Tokyo Dome wasn’t a harbinger of great things on the horizon. Miami went 8-8 that season; the Raiders posted a 9-7 record.

Two years later, Shula ascended to the top of the metaphorical mountain. He surpassed another NFL icon, George Halas of the Chicago Bears, to become the NFL’s all-time winningest coach (victory No. 325, including playoff tilts) on November 14, 1993, when the visiting Dolphins topped the Philadelphia Eagles 19-14.

Shula retired after the 1995 season with 328 regular-season victories along with 156 losses and six ties. In 33 seasons at the helm, he had only two losing seasons (Find his year-by-year won-loss record here). Including the postseason, he compiled a 347-173-6 mark.

The Ohio native led the Baltimore Colts from 1963-69, and took the Johnny Unitas-led Colts to Super Bowl III against Joe Namath and the New York Jets after the 1968 season. The Jets’ 16-7 victory remains one of the biggest upsets in football history.

“It’s hard to compare this team with other great teams of the past, but this team has gone into an area that no other team has gone into before,” Shula said after completing the only perfect start-to-finish season (regular season and playoffs), according to The Coffin Corner, the official magazine of the Pro Football Researchers Association. “In the past there was always the feeling of not having achieved the ultimate. This is the ultimate.”

At age 33, Shula became, at the time, the youngest head coach in NFL history when he succeeded Weeb Ewbank as Colts coach. The Coffin Corner dug up the team’s original press release, which hailed Shula’s coaching credentials before he rose to coast-to-coast fame as a sideline general:

He was hailed as a brainy type who was destined for a bright future as a grid tutor. Now, perhaps earlier than he had ever anticipated, he gets a shot at the top job.

Returning to the American Bowl tale, Shula’s meticulous planning for the trip didn’t go as smoothly as he had hoped.

The Dolphins’ journey to Tokyo for the American Bowl against the Raiders last Saturday came right out of the book of bad school field trips,” Smith wrote. “The charter flight was late leaving Miami, because Mark Duper, Jim Jensen and T. J. Turner went to the wrong airport.

While their teammates were sitting on a plane in Miami, Duper, Jensen and Turner were wandering around the Fort Lauderdale airport like lost tourists.

“After a brief layover in Seattle, the plane was heading for the runway when the head count showed that two players were missing,” Smith reported. “It seems Keith Sims and Gene Williams, a pair of 300-plus pound guards, had not got back on the plane. Despite being served four meals on the flight from Miami, Sims and Williams headed for a restaurant as soon as the plane landed in Seattle and missed the boarding call.”

The aforementioned 19-17 Dolphins victory may have made the return trip a bit more pleasant for Shula and his club than a defeat, but perhaps the journey was jinxed because of what happened to Duper, Jensen, and Turner.

“After a 19-hour flight back to Miami,” Smith wrote, “the plane sat at the gate for 45 minutes before players could get off the plane because of malfunctioning equipment.”

Prep Work for the American Bowl

The Baltimore Sun described the unique prep work for the third annual American Bowl by referencing Japan’s sumo culture in the headline: “Dolphins, Raiders to grapple in Tokyo.”

The article detailed how the teams prepared for the game:

The East’s meeting with the West began yesterday morning when Dolphins and Raiders quarterbacks Dan Marino and Jay Schroeder and Raiders offensive guard Todd Peat hammed it up for photographers with former sumo grand champion Onokuni.

During the short photo session, Marino gave Onokuni — who weighs a formidable 414 pounds — pointers on how to throw the ball, while Peat, who says he is 100 pounds lighter than Onokuni, showed another wrestler how to get down into a three-point stance.

What followed was a midday practice in oppressive heat (95 F), according to published reports. The Dolphins and Raiders conducted a clinic for several hundred college players from the Tokyo metropolitan region.

Indeed, the Dolphins and Raiders were trying to please the fans in the hot, sticky weather, while also looking to build off of their strong 1990 seasons (both teams went 12-4).

In the run-up to the American Bowl, a Japanese reporter asked Shula if he expected it to be a high-scoring game.

According to multiple published reports, Shula responded by saying: “I think you’re asking the wrong coach. We had our first preseason game last week and we had zero touchdowns and 115 yards total offense. So we’re hoping our offense is a little better in the game this week against the Raiders.”

Miami was coming off a 6-0 defeat in a preseason game against the Chicago Bears. The Raiders, then led by Art Shell, were looking to rebound from a 24-17 setback to the San Francisco 49ers.

Shula viewed the epic journey as strictly business, not a tourist opportunity.

“Personally, I’m not going over there with the idea of sightseeing,” Shula told reporters before the trip. “The Raiders are traditionally a tough defensive team. They have an explosive offense, so we hope defensively we can do a good job against them and we hope our offense can score touchdowns.” 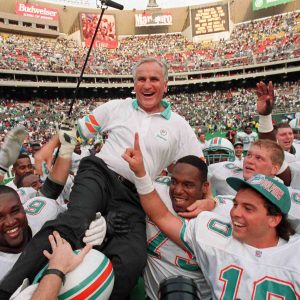 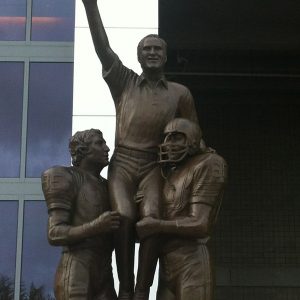 Don Shula was inducted into the Pro Football Hall of Fame in Canton, Ohio, in 1997.

His bio on the Hall of Fame website included this revealing statement about his approach to coaching: “The important thing is not what Don Shula knows or what any of my assistant coaches know. The important thing is what we can transmit to the people we’re responsible for. That’s what coaching is — the ability to transmit information.”

Apparently, transmitting information was one of Shula’s chief traits. Inspiring players to achieve great things was perhaps on par with the former.

Reacting to his mentor’s death on May 4, Csonka tweeted: “…Winning was critical to him but winning WITHIN THE RULES was more important. There was only 1 perfect team in the first 100 yrs of the NFL and Coach Shula is the reason!”