Japan’s traditional sports (sumo and judo, for example) often receive celebratory coverage in the vernacular press, and baseball has also carved out a massive following within the nation’s 47 prefectures.

Other sports’ big events pop up once or twice a year and news coverage increases in the run-up and aftermath of competition. Chalk up the Koshien Bowl as a prime example.

For 75 years, the nation’s college football championship game has paired the winner of the East Japan region (Hokkaido, Tohoku and Kanto) against the West Japan region (Tokai, Hokuriku, Kansai, Chushikoku and Kyushu).

The Fighters, who trailed 14-7 after the opening quarter, outscored the Phoenix over the middle two periods to turn the tide, then put 14 points on the scoreboard in the final stanza. See highlights of the high-scoring game here.

The powerhouse schools’ rivalry has received its fair share of attention beyond this nation’s shores in recent years.

Search for “Nihon University” and “tackle,” and your search engine will be bombarded with stories about a May 6, 2018, exhibition game between the schools. Fighters quarterback Kosei Okuno was hospitalized after suffering an injury on a late hit. It became known as the dirty tackle scandal in countless news reports. (A Phoenix player, linebacker Taisuke Miyagawa, who was penalized for an unsportsmanlike tackle on Okuno, claimed his head coach Masato Uchida instructed him to injure the QB. This resulted in two Nihon University coaches, including Uchida’s assistant Tsutomu Inoue, receiving lifetime bans.)

That infamous game now seems like a lifetime ago. Kwansei Gakuin University continued its annual pursuit of another national championship. Conversely, Nihon University was booted out of the Kantoh Collegiate Football Association before returning in May 2019 and revitalizing its program.

To his credit, Koshien Bowl MVP Okuno said the right things after Sunday’s game, focusing on the competitive fire of both teams. He didn’t humiliate his opponent in comments made to reporters. He let his play on the gridiron speak for itself.

“I’m happy that we were able to square off on a stage such as Koshien,” Okuno was quoted as saying by Kyodo News. “Both sides played hard and it was a great game.” 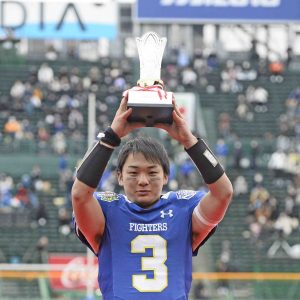 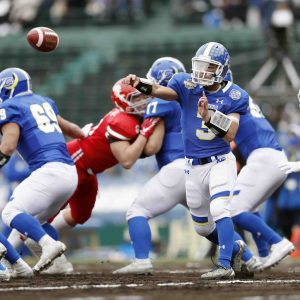 Okuno completed 27 of 41 passes for 320 yards and a pair of touchdowns, including an 11-yard scoring strike to receiver Kazuma Umezu after 2:55 had elapsed in the first quarter. It was a well-placed pass that Okuno lofted into the right corner of the end zone on a second-and-goal play.

Umezu finished with a team-high eight catches for 68 yards. Running back Koki Miyake had a strong performance as well, scoring three rushing touchdowns (13, 3 and 53 yards) on 11 carries for 123 yards. Teammate Kimiaki Maeda chipped in with 12 rushes for 86 yards.

Nihon University running back Riu Kawakami produced the top individual highlight of the game, a 78-yard scamper for a TD in the fourth quarter, crossing into the end zone 1:48 into the period. Kawakami ran 12 times for 141 yards. 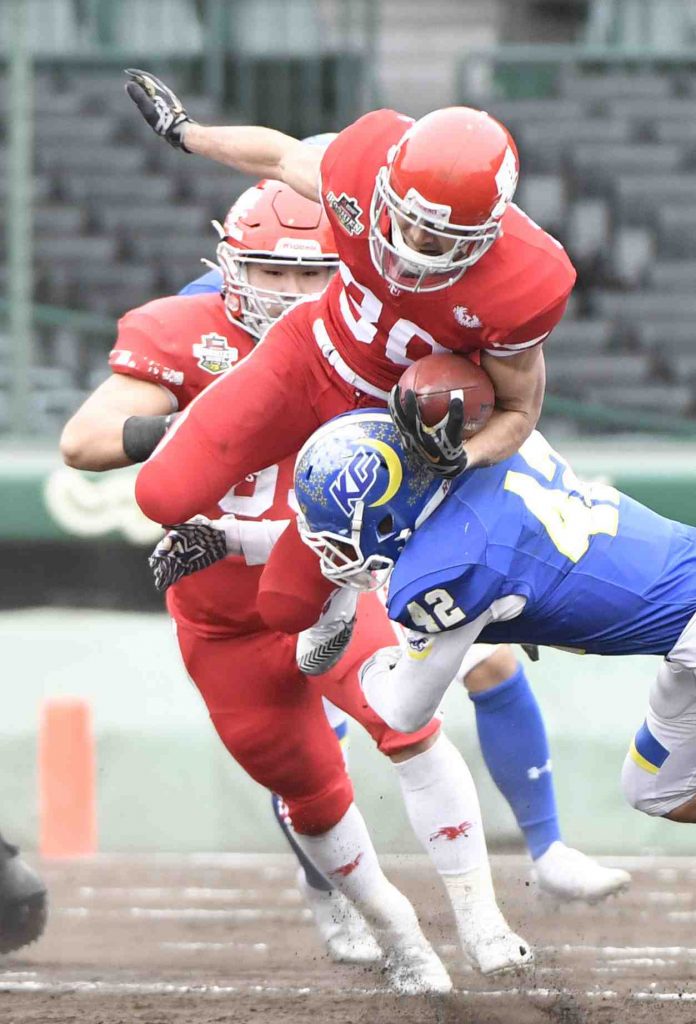 Fighters coach Kazuki Omura noted that the Phoenix’s offensive and defensive lines are strong and created challenges for his team from the get-go.

“[But] as a result of being able to adjust from the second quarter, we were  able to stop the opponent’s offense,” Omura told reporters after the game. “Of course Miyake was also good [on offense].”

Omura also commended the in-sync play of Okuno and receiver Kaito Suzuki, who hauled in four passes for 96 yards.

In short, the Koshien Bowl is one of the staples on the sports calendar in December, and this year’s participants have appeared in the game more than any other universities.

Kwansei Gakuin was making its 54th appearance in the game. A jaw-dropping participating rate, when you consider the fact that the first Koshien Bowl was held in 1946.

What’s more, the schools were meeting for the 30th time in the Koshien Bowl, becoming almost a template for the information page in the game program. 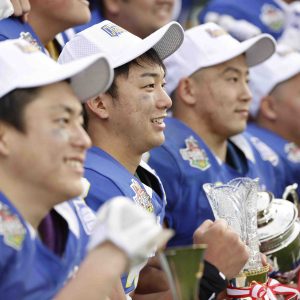 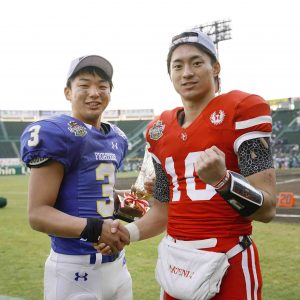 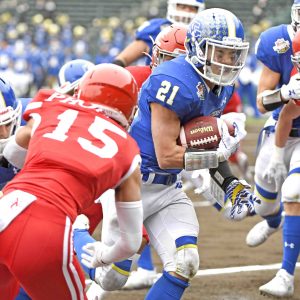 Kwansei Gakuin University (in blue) is the winningest program in Koshien Bowl history.

A Tradition of Excellence

The Fighters picked up their first Koshien Bowl victory in 1949, trouncing the Keio University Unicorns 25-7, then nearly replicated that result a year later with a 20-6 verdict over the same disheartened Unicorns.

Seventy years have passed and this much is true: If more than a year passes without the Fighters booking a spot in the Koshien Bowl, it’s, well, a drought.

The Fighters have had winning dynasties in multiple decades, including 1953-56, 1973-77. In between, the Phoenix denied their rival titles in four consecutive seasons from 1961-64.

Frustrating outcome again and again for Kwansei Gakuin players and their fervent supporters.

But what happened in 1977—a 51-20 Fighters victory over the Phoenix—lit a fire under the Nihon University squad, which came back the next year and avenged the lopsided loss, winning resoundingly, 63-7.

It was the start of a glorious Koshien Bowl run for the Phoenix at the Fighters’ expense, with a troika of high-scoring triumphs (48-0, 42-7 and 42-31 over the Hyogo Prefecture school in 1979, 1980 and ’81), before collecting their fifth championship in five seasons the next year. For Kwansei Gakuin, perhaps it was a godsend to have a year away from the season finale; this time, Nihon University shellacked Kyoto University 65-28.

Without inundating you with the entire calendar history of the bowl game, it’s worth noting for contemporary context that the Kwansei Gakuin Fighters have been the preeminent college football team during the past decade, with wins in 2011-14 (which featured 23-9 and 55-10 victories over Nihon University to close out the four-peat), and 2016, followed by a 37-20 triumph over Waseda University in 2018 and 38-28 over the same squad the next year.

So what stood in the way of five consecutive titles through Sunday for Fighters coach Kazuki Omura’s team?

Then, in the latest 75th Koshien Bowl encounter, Okuno’s poise helped keep his teammates from getting too high or too low emotionally after the Fighters took a commanding advantage.

“I was thinking of concentrating on what was in front of me,” was how he described the four-quarter task that he handled admirably. 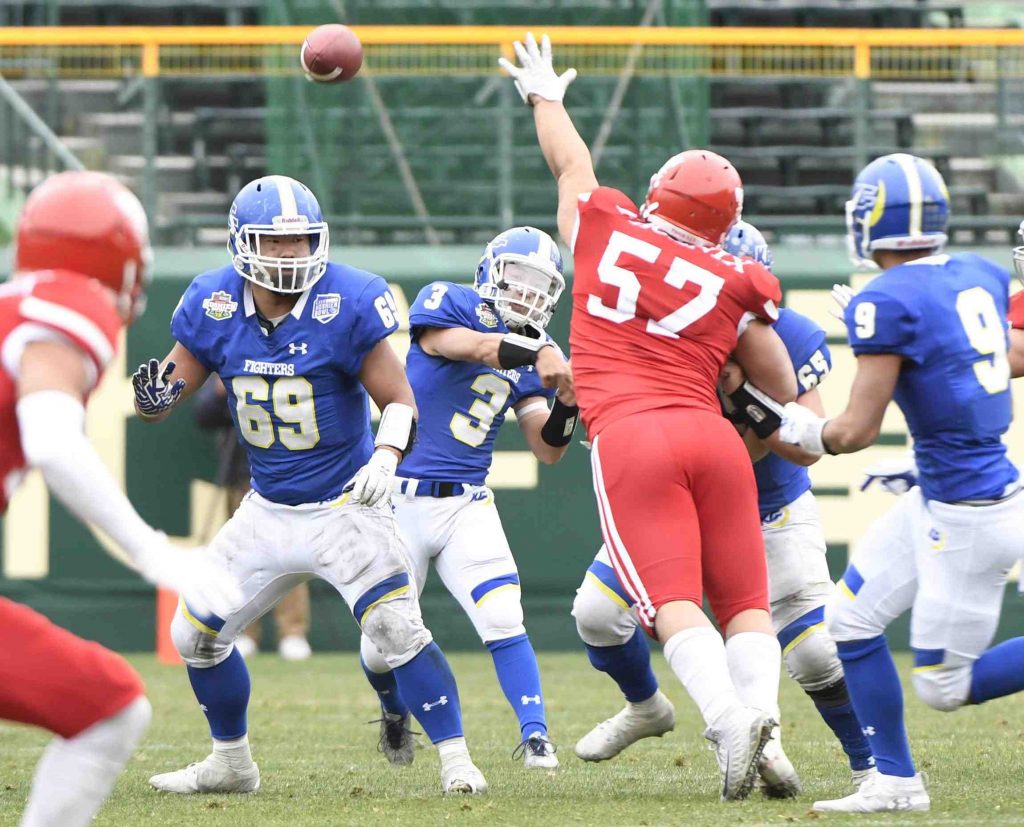 Kwansei Gakuin University and Nihon University met for the 30th time in the Koshien Bowl on December 13.

By winning the 75th Koshien Bowl, the Fighters earned the chance to be Japan’s college football representative in the Rice Bowl on January 3 against the X-League champion Obic Seagulls. Kickoff is 3 p.m. at Tokyo Dome.