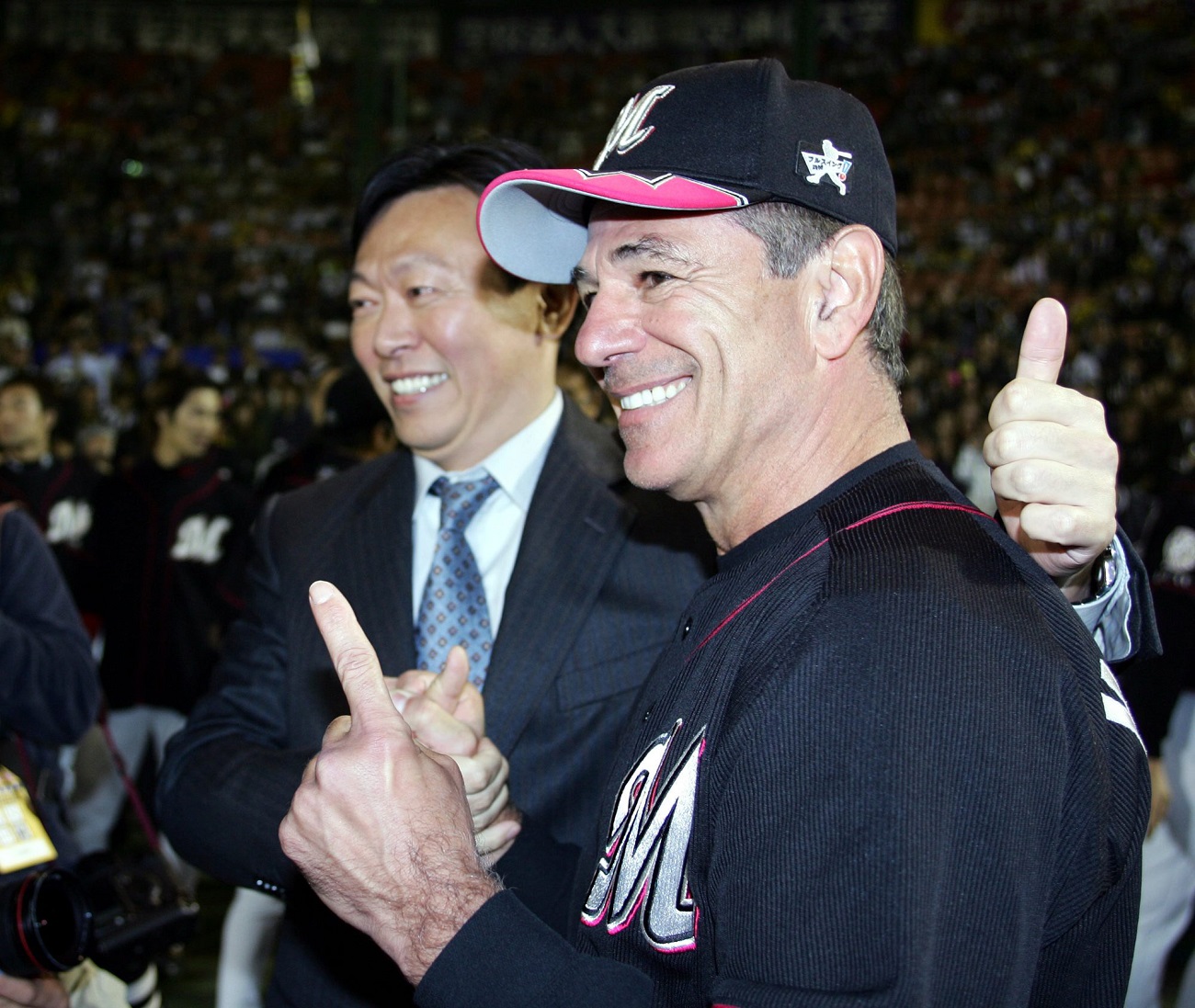 Bobby Valentine loves the spotlight. He loves to tell stories. He loves baseball.

So he was in his element during a Zoom call with baseball fans on both sides of the Pacific Ocean last week, commanding the virtual room not unlike how he’s piloted pro baseball teams for decades.

About 80 participants had the privilege of listening to and interacting with Bobby V during a “Chatter Up” call, a fun event organized by JapanBall. The international baseball tour company began hosting Zoom calls this spring as a way to engage the baseball community during MLB and NPB shutdowns due to the COVID-19 pandemic.

It was time well spent with the ever-popular former Chiba Lotte Marines manager, who donned a 2009 Marines spring training hat and sat in his home office.

Since June 2013, Valentine has served as the executive director of athletics at Sacred Heart University in Fairfield, Connecticut. More than just a figurehead, he’s an integral part of the community and a great recruiting tool for the school. In 2019, at the Bobby Valentine Health & Recreation Center dedication ceremony on campus, Sacred Heart University President John J. Petillo remarked, “Bobby carries SHU on his sleeves. He’s like living swag.”

So when did it all begin?

The story of how Bobby V wound up managing the Chiba Lotte Marines the first time probably isn’t widely known. It actually preceded his appointment as skipper in 1995 by several years.

In 1989, when he was at the helm in Texas, Valentine was invited to visit Japan to speak to baseball coaches throughout the country about one of his managerial tactics with the Rangers: implementing pitch counts. Tatsuro Hirooka, the then-Chiba Lotte general manager, invited him.

Fast forward to 1994, when Valentine was managing the Triple-A Norfolk Tides, the Mets’ International League affiliate. Hirooka, who played shortstop for the Yomiuri Giants 1954-66 and later served as the dugout boss for the Yakult Swallows and Seibu Lions, made several trips to the United States throughout the season to keep tabs on Bobby V.

“By the time they offered it, I was praying that they would,” Valentine said last week.

Valentine was fired after the 1995 season, even though the Marines had won more games than in 1994. And despite the authoritarian power bestowed on NPB managers that’s ingrained in the culture, Valentine’s first stint as a Mariners skipper proved to be a humbling experience.

“I had no idea the manager had so much authority, but you know because I was the protruding nail that many people wanted to bang down, I had to prove myself,” Bobby V said on Zoom. “All of my baseball had to be reworked. Whether or not I thought to start at a certain time when you’re running, to grip a ball when you’re pitching, to swing a bat when you’re hitting, to field a ball when you’re fielding, all of the things of baseball as well as what works during the game strategically, I had to reprove to myself.

“I thought I figured it all out, but getting to Japan was a great learning experience for me, not only to learn my own stuff again because I had to inspect what I expected when I was teaching because I didn’t have the language to talk through it. I also benefited from learning from others…” 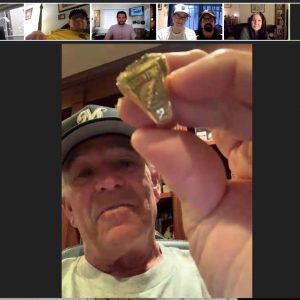 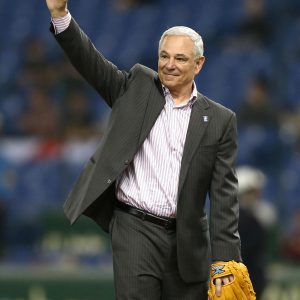 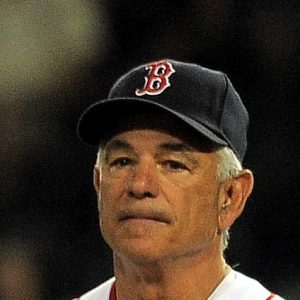 Exhibit A: Hirooka, the 1954 Central League Rookie of the Year

“I think he was the greatest baseball guy I was ever around except for (Dodgers Hall of Fame manager) Tommy Lasorda,” Valentine told Chatter Up participants. “I think that Hirooka lived the game of baseball. … He understood all facets of the game, and we disagreed on a few things — mainly, the concept of rest.”

“I think if there’s any dividing line that was ever drawn in the sand between the great general manager/manager/shortstop/baseball Hall of Famer that I had the pleasure of working for … it was that idea that more is not necessarily always better. But remember, that’s how I grew up playing baseball. If I couldn’t hit a curveball, the idea was to practice hitting the curveball. And how long do you practice? Until you can hit the curveball!

“More (was) always better when I was growing up. But I moved out of that thinking understanding that a restful body works a lot better than a stressful body.”

Growth as a Manager

How else did Valentine evolve as a manager? By recognizing that obsession with winning can be counterproductive.

Valentine recalled a conversation he had with Rangers slugger Pete O’Brien after the 1987 MLB season, and it’s stuck with him ever since.

“He said to me, ‘You know, Bobby, I love playing for ya. This has been one of the good years of my life, but you know you think about winning too much,’ ” Valentine remembered O’Brien saying.

“I remember that happening, and then I started reflecting on that and at first I thought the guy was crazy. How can you think about anything other than winning if you’re a manager? And then I started thinking what he meant was I had to concentrate more on the process, and if the process is done properly, the winning will come, and I think that was the way I managed most of my time after 1987.” 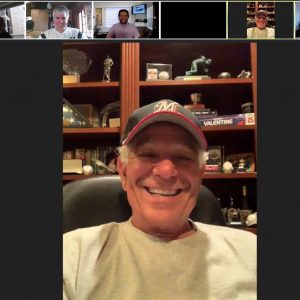 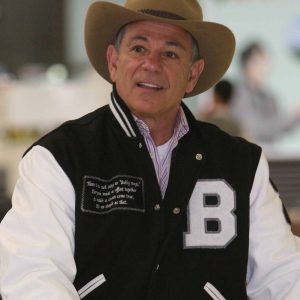 Another Shot in Chiba

Marines acting owner Akio Shigemitsu convinced Valentine to take over as manager again for the 2004 season.

“I wanted to embrace the society and the community, especially the second time back,” Valentine reflected. “When I went there the first time, I was just going to show everybody how to do it and then get out of Dodge.

“But when I had the opportunity to return 10 years later, and Shigemitsu-san saw me in New York City, like, the week that I got fired and said, ‘Hey, being you’re not with the Mets anymore, do you want to come back?’ And I didn’t even hesitate. I said I’d love to come back.”

A year later, Bobby V and the Marines captured the Japan Series title with a four-game sweep of the Hanshin Tigers, and completed the year with the Asia Series crown. (He also guided the Mets to the 2000 National League pennant, though they fell to the New York Yankees in the Subway Series.)

Valentine used the classic example of the doage (victory toss) to illustrate how a championship team operates.

While entertaining Chatter Up guests with tales from on and off the baseball diamond, Valentine smiled and laughed often. He had everyone’s undivided attention when he displayed his 2000 NL Championship ring, glistening with 14-karat gold, and finished his show-and-tell exercise with his handmade 18-karat Japan Series ring, with his name carved on it.

Pulling off his cap, he also mused about his hair being longer than usual due to the COVID-19 pandemic.

“I’ve been in the house for a month and a half for all intents and purposes,” Valentine said. “The barbers aren’t open yet. I have a lot of long hair and it’s all white.”

Bobby V also joked about his habit of finishing a sushi meal the same way. It always ends with a tuna sushi roll with natto “to help me digest and make it all happen.” 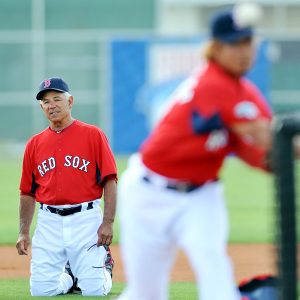 Bobby Valentine when he was with the Boston Red Sox 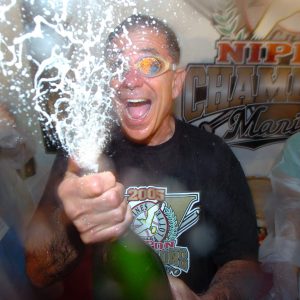 The Connecticut icon owns Bobby Valentine’s Sports Gallery Cafe, which opened in his hometown Stamford in 1980, and also runs the Bobby Valentine Sports Academy, in addition to his administrative duties at Sacred Heart University.

Valentine also briefly spoke about the joy of organizing and hosting international exchanges, such as summer baseball camps involving teenagers from Ofunato, Iwate Prefecture, in 2014 and 2017. He described both events as “great” experiences for him as a coach. (In August 2014, 15 American teenagers traveled to the Tohoku town that was devastated by the March 11, 2011 earthquake and tsunami, and worked out and trained and played ball with Ofunato ballplayers. In August 2017, 10 Ofunato junior-high students visited Ridgefield, Connecticut, for the same reason.)

Bobby V’s busy life is filled with a sense of purpose, as exemplified by the Order of the Rising Sun, Gold Rays with Rosette, presented by Emperor Akihito, to him in 2018.

However, he regrets not having enough time to follow NPB games on a regular basis.

“I try to live a life that’s full,” Valentine stated, “and I just don’t follow the NPB as much as I’d like to.”

But he maintains a deep love for Japanese culture and the way fans embrace the game here.

“I think that the fan experience in Japan is second to none,” he concluded. “…I am always infatuated by the fandom and the spectacular rhythm that there is to the noise, if you will, but also to the participation. The fans in America go and eat hot dogs and drink beers and react to things that happen, and the fans in Japan go and try to be part of the act and participate with what happens and I think it’s just spectacular.”