Should Abe Have Xi Jinping Over? Japanese Prime Minister Should Brush Up on His Family History 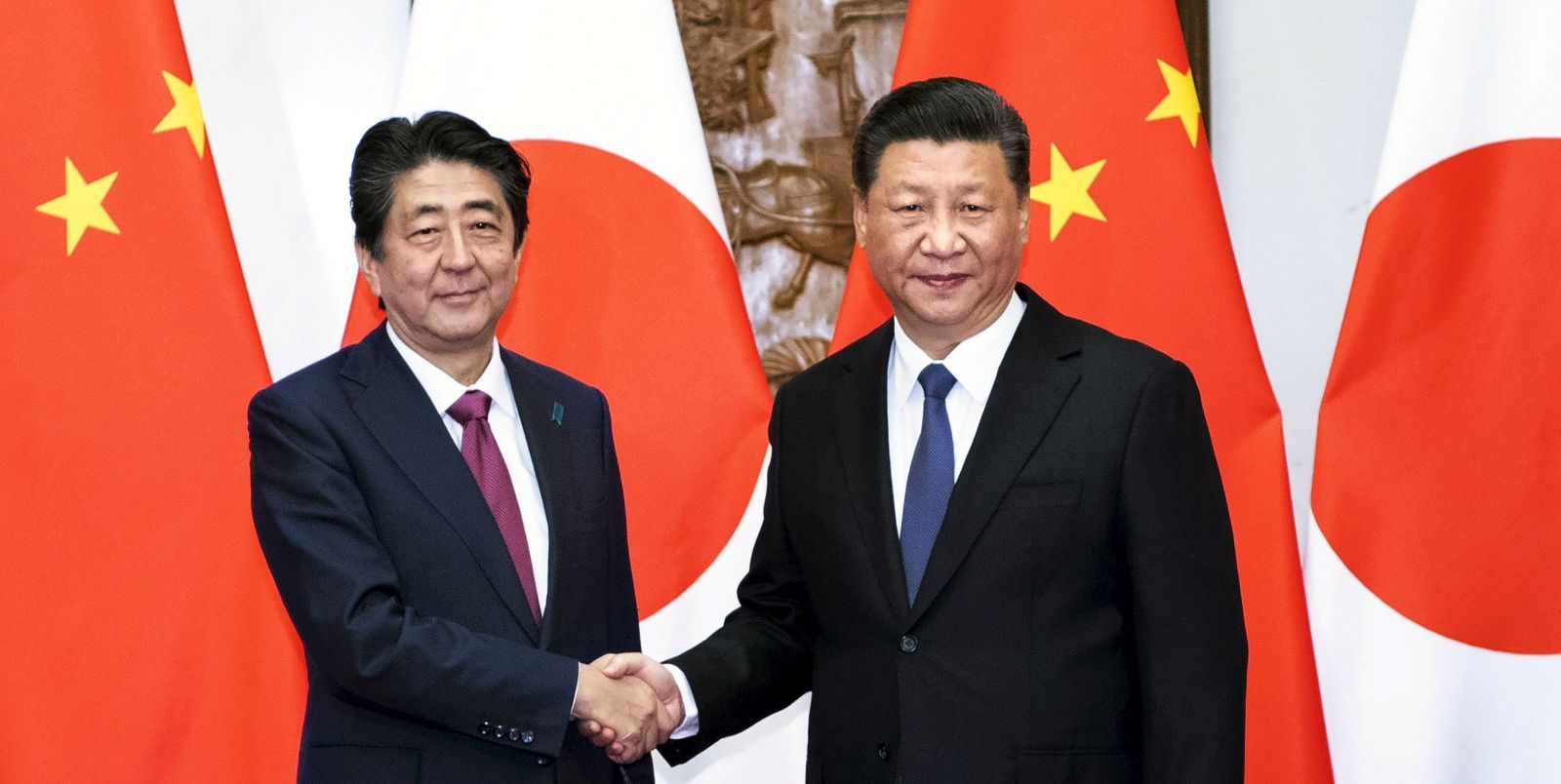 A little more than a week after the so-called “Hagerty Incident” — where presidential press secretary James C. Hagerty was mobbed at Haneda Airport on June 10, 1960 — Dwight D. Eisenhower was scheduled to arrive at the same location to begin the first visit to Japan by a sitting American president.

Prime Minister Nobusuke Kishi had formally issued the invitation during his own summit with Eisenhower in January 1960 for the signing of the revised United States-Japan Security Treaty in Washington. During Kishi’s farewell call on the President the afternoon of January 20, the two discussed the timing of the visit.

Kishi was planning to seek Diet ratification of the treaty during the spring, to be followed by the visit. If everything went well, the U.S. Senate would have time to consider it before its summer recess. With the U.S. presidential elections scheduled in November, it would be a busy time that fall, and so completing ratification became necessary during the first half of the year.

Deliberations in the Diet, however, did not go well with the opposition parties. Rival factions in Kishi’s own party, which had given him problems throughout the treaty revision negotiations, also added to his worries. Demonstrations by radical student groups, leftist intelligentsia, and other elements emboldened the opposition parties.

As early as May 23, Eisenhower wondered aloud in a meeting with his new secretary of state whether an alternate time to visit Japan might be better, although he “would not want to make any move which would be embarrassing” to the Japanese government. The next day, Eisenhower told him by telephone that if “opposition is strong enough, his trip might be embarrassing to Kishi, but, on the other hand, Kishi might feel if the President didn’t come it would appear that state policy is being dictated by his opponents.”

U.S. Ambassador to Japan Douglas A. MacArthur II and the embassy staff huddled, then responded: “It would be a great mistake for the President to take [the] initiative in postponing his visit to Japan…. [The negative perceptions] could be a mortal blow for Kishi who is in real trouble…. If there were a postponement of visit it is of utmost importance that the initiative be that of GOJ.”

Later that same day (May 25), a Cabinet member and one of Kishi’s closest confidants, Takeo Fukuda, called on the ambassador to ask on a “strictly personal basis” whether the visit could be postponed long enough to allow passage, for 10 days or two weeks. Knowing the President’s schedule afterwards, including a visit by the King of Thailand, the need to keep dates open for pre-recess, last minute congressional legislation, and attendance at the Republic National Convention near the end of July, MacArthur said, “No.” But he added that he thought postponement to a later date, such as August, “might be feasible and even desirable if GOJ believed the timing was not good.”

Secretary of State Christian A. Herter informed MacArthur of his wholehearted support for this approach, noting leaks in the Japanese press might make it easy for Kishi to take this initiative. However, according to Foreign Minister Aiichiro Fujiyama, who met secretly with MacArthur in the afternoon of May 26, Kishi felt that the “visit as scheduled would strengthen substantially elements in Japan that favor Japanese-American partnership and would be of material assistance with respect to public opinion.”

Despite threats by the Socialist Party and others to disrupt things, Fujiyama emphasized that the GOJ was “certain that it can fully assure the safety of the President and that there is no personal risk involved for him.”

MacArthur was not so sure, and encouraged them to reconsider postponement as any demonstrations, no matter how small, would create an image in the United States and elsewhere of a “hostile anti-American Japan.” They argued that such situations would “not only create embarrassment but strike at the dignity of the Office of the President.”

Fujiyama appreciated the additional insights, but said that, domestically in Japan, any postponement would give the impression that Kishi was doing so to “prolong the life of his government,” which was relayed to Washington. Herter responded that Eisenhower was “prepared to come” if it “remains the considered judgment of Kishi that a presidential visit in June as scheduled is vital.”

Vice Foreign Minister Hisanari Yamada, who had just met with Kishi and key leaders of the LDP and government, informed the ambassador that it was desirable, having “thoroughly considered all angles and considerations and reached unanimous agreement.” With this, the White House announced at the end of May the schedule of the President’s Far East trip, with Eisenhower to arrive in Japan on June 19, the day the treaty would automatically pass the Upper House.

The U.S. government continued to watch developments closely. At a June 8 National Security Council meeting, Eisenhower voiced his growing concern over the worsening situation in Japan. He was not worried about his physical safety, however, just that it would be “a sorry thing when you think you are going in [the Diet to give a speech] with armed guards at the doors.”

He nevertheless decided to permit his staff to continue coordinating, including the ill-fated trip by Hagerty and Appointments Secretary Thomas E. Stevens to Tokyo. MacArthur, who was caught in the melee at Haneda airport with them and evacuated by a Marine helicopter, had been worried about the Japanese government’s ability to guarantee even the President’s safety — a concern that was shared in Washington by the Secret Service.

Herter learned in a classified report that the Commissioner General of the National Police Agency, Nobuo Kashiwamura, had informed Kishi on June 8 that the visit should be postponed “under present circumstances” and that he was “not prepared to make full use of police against Japanese people in protecting President.” Herter told MacArthur that the GOJ’s “flat failure” to prepare adequately and deal with Hagerty’s arrival “has caused grave misgivings among all of us who have staunchly supported the visit.” Kishi, Herter said, “should so be informed.”

Meeting on June 12, Kishi told MacArthur that he was confident the President’s safety could be guaranteed, but not necessarily protected from “some occasional unpleasantness.” As such he would need a few more days to assess the political and security situation.

On the evening of June 15, however, the decision would be made for Kishi when the situation turned deadly. Tokyo University student Michiko Kanba died on the Diet grounds during the protests, reportedly having been trampled. As Kishi notes in his memoirs, Japanese sentiment would not permit a visit while the country was in mourning.

The next day, a special Cabinet meeting decided to withdraw the invitation. Through Fujiyama, who had contacted MacArthur about the planned meeting and asked the ambassador to come see him at once, Kishi reluctantly informed the U.S. side of his government’s decision.

Eisenhower, then in Manila, wrote to Kishi that night, expressing his “full and sympathetic understanding.” Taking responsibility for the chaos caused over the handling of the treaty, the Cabinet resigned en masse a month later. A U.S. presidential visit was not realized for another 14 years.

Today, Kishi’s grandson Shinzo Abe is under his own pressure regarding a different state visit. His attempts to host Xi Jinping, Chinese President and general secretary of the Chinese Communist Party, in Japan were delayed by the COVID-19 pandemic. Now they are apparently under review and will likely lead to major demonstrations, especially since Abe has not done the necessary spadework public opinion-wise.

However, it should be noted that the circumstances of the above U.S. presidential visit and Xi’s are quite different. The postponement and eventual cancellation of the visit by Ike, as he was affectionately known, was due to the protests against the Kishi government.

Cancellation (or withdrawal of invitation) for a Xi visit would likely be done in light of Japanese public dislike of the Chinese leader. With criticism and concern, the Japanese public has watched Xi’s actions toward Hong Kong, Taiwan, and others domestically, such as the Tibetan and Uighur communities, as well as the Senkaku Islands dispute and other bilateral and regional issues.

In any case, the future handling of the Xi visit could equally lead to the early fall of the Abe government. He would do well to brush up on his family history.