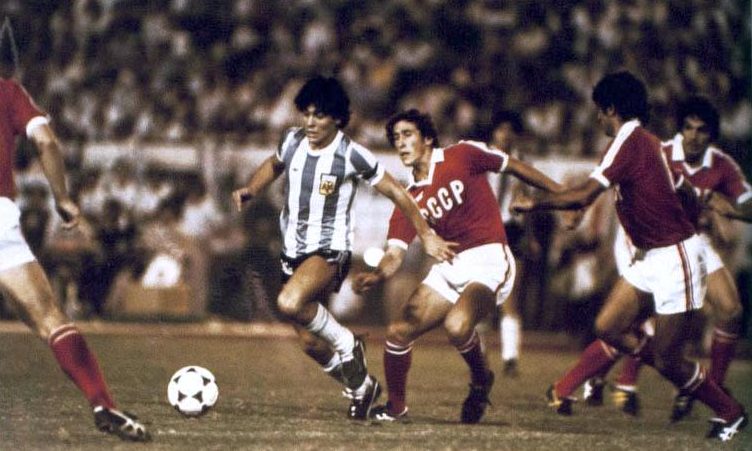 Diego Maradona was the last player to be left off the Argentina national squad for the 1978 FIFA World Cup, which was held in his homeland.

Sure, he was young (only 17), but he was already a supremely gifted player.

Argentina coach Cesar Luis Menotti had based his decision on the belief that Maradona wouldn't handle the physicality of the World Cup's tougher, older players particularly well. But remember this: The youngster had thrived as a key player for the club team Argentinos Juniors, for whom he made his debut 10 days before his 16th birthday in 1976. (And his time with the club would be a period of remarkable individual success: 115 goals in 167 matches before joining rival Boca Juniors in 1981.)

A year after Menotti opted against giving Maradona a coveted roster spot, he erased any doubts about what he could accomplish on the global stage.

And Maradona would never again be left out of the discussion about the greatest footballers of all time.

Maradona always did things his way on the field, with sheer brilliance and never-ending controversy. (See: His “Hand of God" goal, simultaneously flicking his head while using his fist to score against England in the 1986 World Cup quarterfinals, a play that goes down in history as soccer's most infamous goal.) But self-destructive behavior off the field hastened his death, from a heart attack at age 60 on November 25.

While the world mourned the short, compact, powerful midfielder's passing, sports fans remembered his magnificent skills and journalists in every metropolis, city, town, village and speck on the map from Buenos Aires to Bora Bora penned tributes to the great Argentina No. 10.

So what did Maradona accomplish in 1979?

He was one of two central figures in Argentina's title-winning performance at the 1979 FIFA World Youth Championship (now known as the FIFA U-20 World Cup) in Japan.

Of Argentina's 20 goals in the biennial event, Ramon Diaz (eight) and Maradona (six) notched 70% of the team's scoring production.

Maradona was a steady force through the tournament, scoring consistently in Argentina's six matches. Argentina defeated Indonesia, Yugoslavia and Poland in Group B play to reach the knockout phase.

Argentina faced Indonesia first and left no doubt about which team was superior, winning 5-0 at Omiya Stadium on August 26. Maradona's goals came in the 19th and 39th minutes.

Against Yugoslavia on August 28, Maradona would be left off the scoreboard for the only time in the tourney. Teammate Osvaldo Salvador Escudero delivered the lone goal of the match.

Maradona was the catalyst against Poland on August 30, giving Argentina a 1-0 lead in the seventh minute en route to a 4-1 triumph. 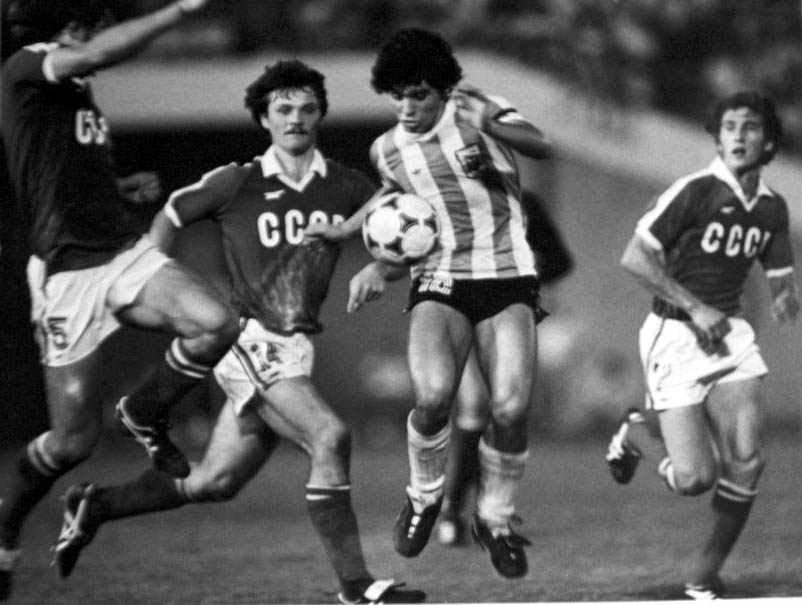 In the tourney quarterfinals on September 2, Maradona scored Argentina's first goal in the 25th minute in a 5-0 romp of Algeria at Tokyo's now-imploded National Stadium. (Kobe and Yokohama were the other host cities.)

Two days later, Maradona provided the finishing touches, not unlike a painter's final, brilliant strokes on a masterpiece, on the pitch. His 74th minute goal capped a 2-0 semifinal victory over Uruguay at the same venue.

On September 7, 1979, the USSR took a 1-0 lead in the final in the 52nd minute before Argentina struck back with three straight goals, the last of which coming from Maradona on a tantalizing free kick into the left corner of the net in the 76th minute.

It was a fitting finish. And, for Maradona, as if to say to Menotti, See, I told you so?

Throughout the tournament, Maradona's ability to control the tempo, change directions in traffic with the ball appearing seemingly as an extension of his foot, weave past a half-dozen or more defenders, pass the ball through the tightest of corridors and inspire his team was off the charts. Statistics and complex analytics really cannot quantify what he did and how he did it in a meaningful way.

In other words, you just needed to see Maradona play to understand how great he was. 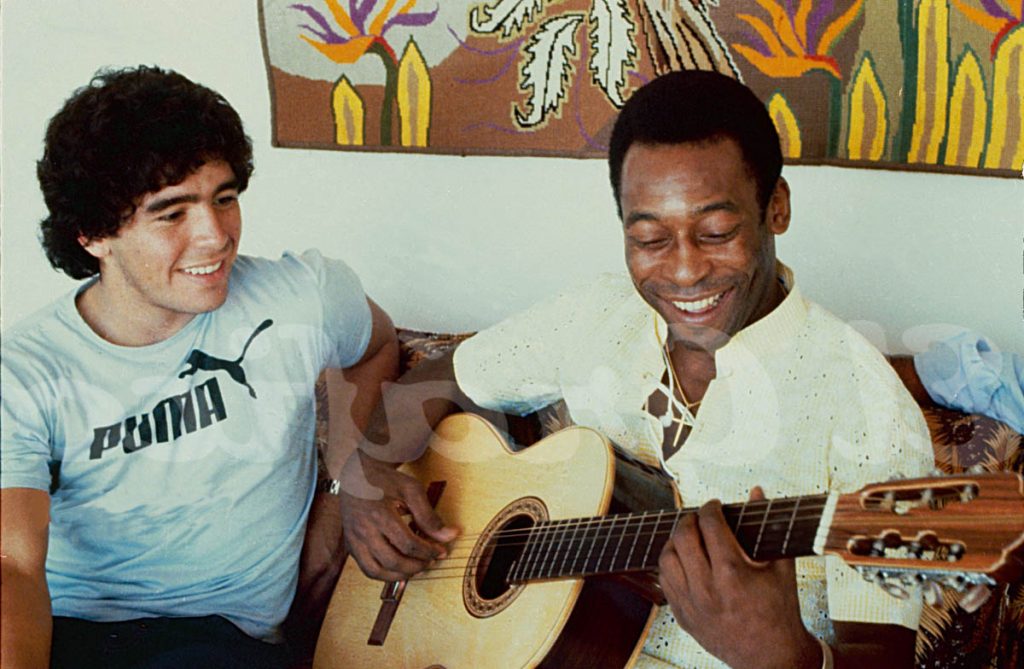 Maradona and Brazil’s Pele are universally recognized as the two greatest players of the 20th century, with Pele getting the nod from many pundits. But Maradona has plenty of supporters, too.

The two men, 20 years apart in age, had a long-running public feud, but Pele put that to rest in the aftermath of Maradona’s death.

"What sad news. I lost a great friend and the world lost a legend, " Pele tweeted. “There is still much to be said, but for now, may God give strength to his family. One day, I hope we can play ball together in heaven."

How 1979 Tournament Was a Harbinger of Things to Come

Video footage of Argentina's 1979 FIFA World Youth Championship games offer a nostalgic look at his greatness before the excesses of fame and fortune and longstanding, well-publicized problems with alcohol and cocaine diminished his preternatural powers on the pitch. See highlights of the final here.

Beyond the problems that would resurface again and again for the rest of his life, those six games in Japan gave the world a glorious introduction to what Maradona could do—and often did throughout his extraordinary career, most notably as a pro while playing for Italy's Serie A club Napoli from 1984-91.

It was Maradona’s sorcery with the ball and his ability to motivate the team that did it for Argentina. He either scored or assisted [71.4] percent of Argentina’s goals in the 1986 World Cup. This type of domination by a single player was unprecedented. For context, during Pele’s prime, in the 1970 World Cup, his individual contribution to the team was 50 percent. No man can do what Maradona did for Argentina.

But rewind to the global showcase in Japan seven years earlier and forever remember that Maradona displayed the roots of his greatness away from the comfort zone of his homeland amidst the pressure of performing at a high standard. 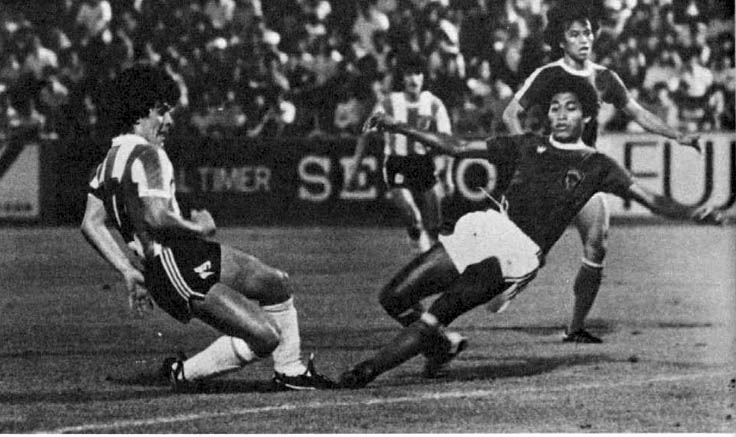 While Diaz received the Golden Shoe Award for scoring the most goals, FIFA.com, global soccer’s governing body’s website, hailed Maradona as the Player of the Tournament.

"This tournament heralded the arrival of a truly exceptional talent; Diego Armando Maradona. Goalscorer (second-best marksman in the tournament with six goals), free-kick specialist, deft passer, Maradona had it all," the article noted. "He was a fine crosser of a ball too, with a change of pace that would leave the best defenders bewildered, and a never erring first touch of the ball, as the footballing world would discover to its cost a few years later."

Nobody will dispute that the 1986 World Cup cemented Maradona’s place in the pantheon of greats, captaining Argentina to the title in Mexico. In addition to the aforementioned Hand of God goal, he also scored what’s known the world over as the Goal of the Century. In the same game!

But the foundation of Maradona’s greatness was telegraphed to the world in Japan in 1979 at a time when news traveled a lot slower than it does in today's 24/7/365 social media age.

Noting his excellence at the 1979 FIFA World Youth Championship and what he had already accomplished for Argentinos Juniors, The Sunday Times of London profiled Maradona in 1980 and declared: "About once in 20 years, a footballer of genius emerges. The last was Pele, the great Brazilian player. Now there is another—Diego Maradona of Argentina."

But leave it to former FIFA President Sepp Blatter to perhaps best describe the lasting impression that Diego Maradona made in Japan in ’79.

“My most vivid recollection is of this incredibly gifted kid at the second FIFA U-20 World Cup in Japan in 1979," Blatter once said. “He left everyone open-mouthed every time he got on the ball."