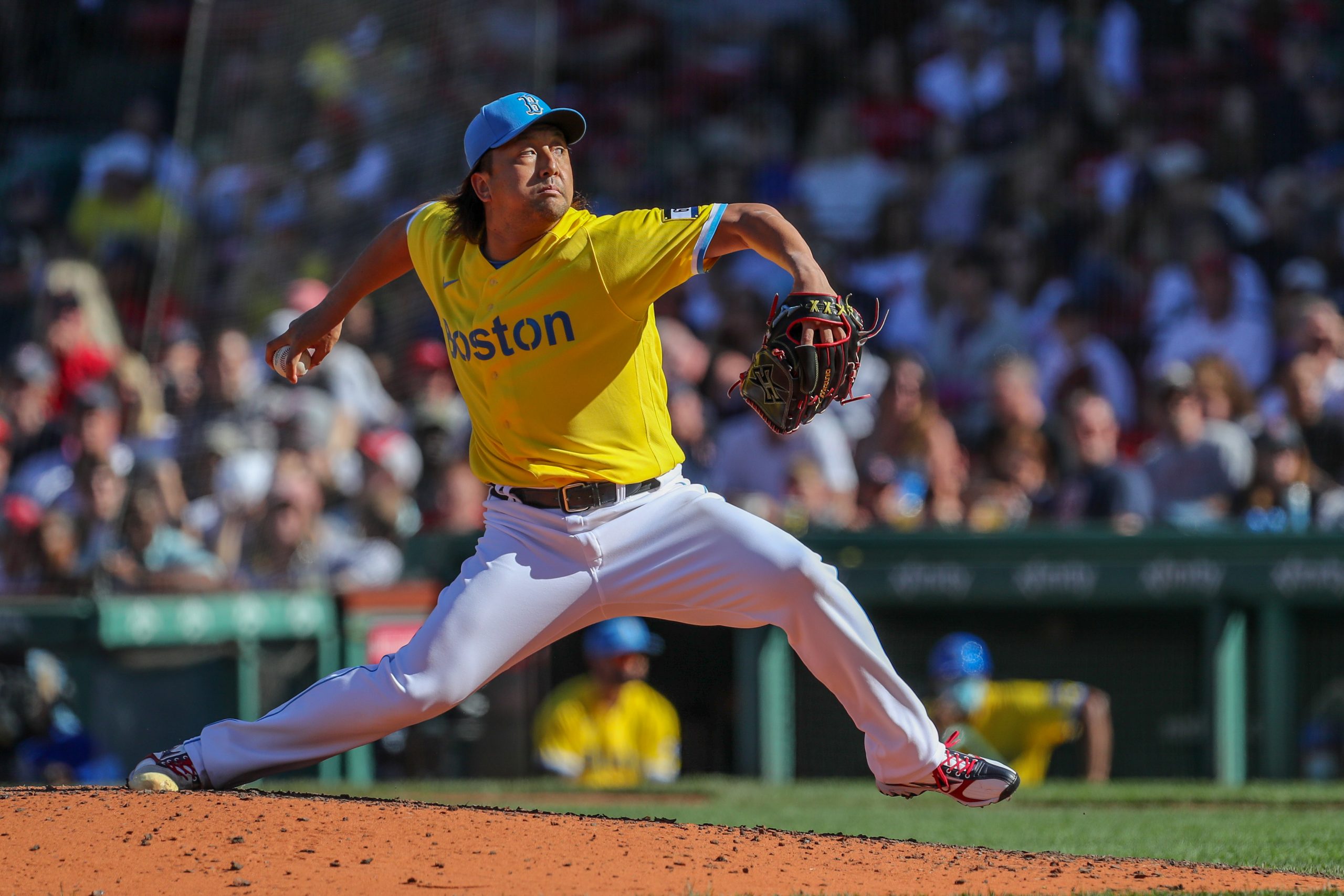 Entering the game with a runner on first and nobody out in the top of the seventh inning against the Baltimore Orioles on Sunday, September 19, Sawamura promptly walked Ryan Mountcastle and Anthony Santander to load the bases.

Trey Mancini followed with the Baltimore Orioles’ biggest hit of the game, bashing a bases-clearing double. And, lickety-split, the Fenway Park visitors turned a 5-3 deficit into a 6-5 advantage over the Red Sox.

Mancini didn’t stop at second, though. He tried to stretch his extra-base hit into a triple and got thrown out at third base.

More good news followed for Sawamura, the 2011 Central League Rookie of the Year: He struck out Austin Hays and Pedro Severino to slam the door on the Baltimore offense in the seventh.

After that, Sawamura’s work day was finished.

And the Red Sox scored three runs in the bottom of the seventh to account for the game’s final score, 8-6. Which made Sawamrua the winner, even though he blew a two-run lead. (Boston’s Hansel Robles and Garrett Richards pitched the eighth and ninth, respectively.)

To an outsider, baseball’s statistical quirks may seem a bit odd. Such as: Why was Sawamura the winner?

In simple terms, he was the last pitcher before the Red Sox scored the winning run. Thus, he was credited with the victory.

For Sawamura, the rocky outing improved his MLB rookie season’s pitching record to 5-1, and it was his first appearance since August 28.

Sawamura tested positive for COVID-19 on August 31, signaling an uncertain timetable for his return.

The 33-year-old Tochigi Prefecture native became one of a dozen Red Sox players ー among them All-Stars Chris Sale, Xander Bogaerts and Matt Barnes ー who tested positive over a three-week period. (In Sawamura’s and Bogaerts’ case, they were the fifth and sixth players who failed their COVID-19 test in a five-day period.)

MLB coronavirus protocols require players to be quarantined for 10 days before they can return.

In spite of the absence of numerous key players in recent weeks, the Red Sox have continued to play quality baseball.

Sunday’s victory was the team’s fifth straight, and Boston (86-52) has the third-most wins among American League clubs. Furthermore, manager Alex Cora’s club has a clear-cut path to the playoffs as a wild-card team.

Credit must go to the team’s training staff, according to Cora, who addressed the team’s COVID-19 outbreak on August 31.

“I’m learning a lot. I think, like I said, the group here, they do a tremendous job just trying to keep us healthy,” Cora was quoted as saying by the Boston Herald. “We have to do what we have to do, but it’s not easy and it’s been going through the league a lot. The timing of this, for us, is not perfect, but at the same time, we have to fight, we have to grind.”

He added: “When you’re fighting for a playoff spot, you got a chance to play in October, it should be fun.”

Getting Adjusted to the Majors

For Sawamura, a change of scenery after 10 NPB seasons, 352 pitching appearances and a 48-52 overall record brought him to a ballclub that has included Japanese pitchers Junichi Tazawa, Koji Uehara, Hideki Okajima and Daisuke Matsuzaka over the past 15 seasons.

Sawamura signed a two-year, $3 million USD deal with the Red Sox in February after splitting the 2020 season with the Yomiuri Giants and Chiba Lotte Marines.

Yomiuri traded Sawamura to Lotte last September, and he played out his NPB contract (pitching in 22 games for the Marines) before becoming a free agent.

He has appeared in 53 games for the Red Sox, mostly  serving as a setup man in the seventh or eighth inning. In 49 innings, the hard-throwing Sawamura has struck out 58 batters. He has one save and a 3.31 ERA. He’s finished four games for the title-chasing Red Sox.

Japanese ballplayers to the majors must make several adjustments, including frequent air travel, a longer season, a greater emphasis on home runs in MLB and the language barrier.

Sawamura told the WEEI Sports Radio Network in the spring that one of the comforts of home helped ease his transition to the majors.

Sawamura explained the significance of it this way: “I couldn’t get a rice cooker for a long time and after I got that finally I was really glad I was able to finally eat white rice. I think the difference in daily life, I think time will solve that.”

As the 2021 MLB season enters its home stretch, the Boston Red Sox and their fans will wish for three things for/from Sawamura:  1. Good health; 2. Good pitching; and 3. Good rice.

For Sawamura, returning to the game is a blessing. The pandemic has impacted every aspect of life on earth, and he dealt with an unplanned forced exile from work.

Now a sense of normalcy has returned to his work, including games like Sunday’s.