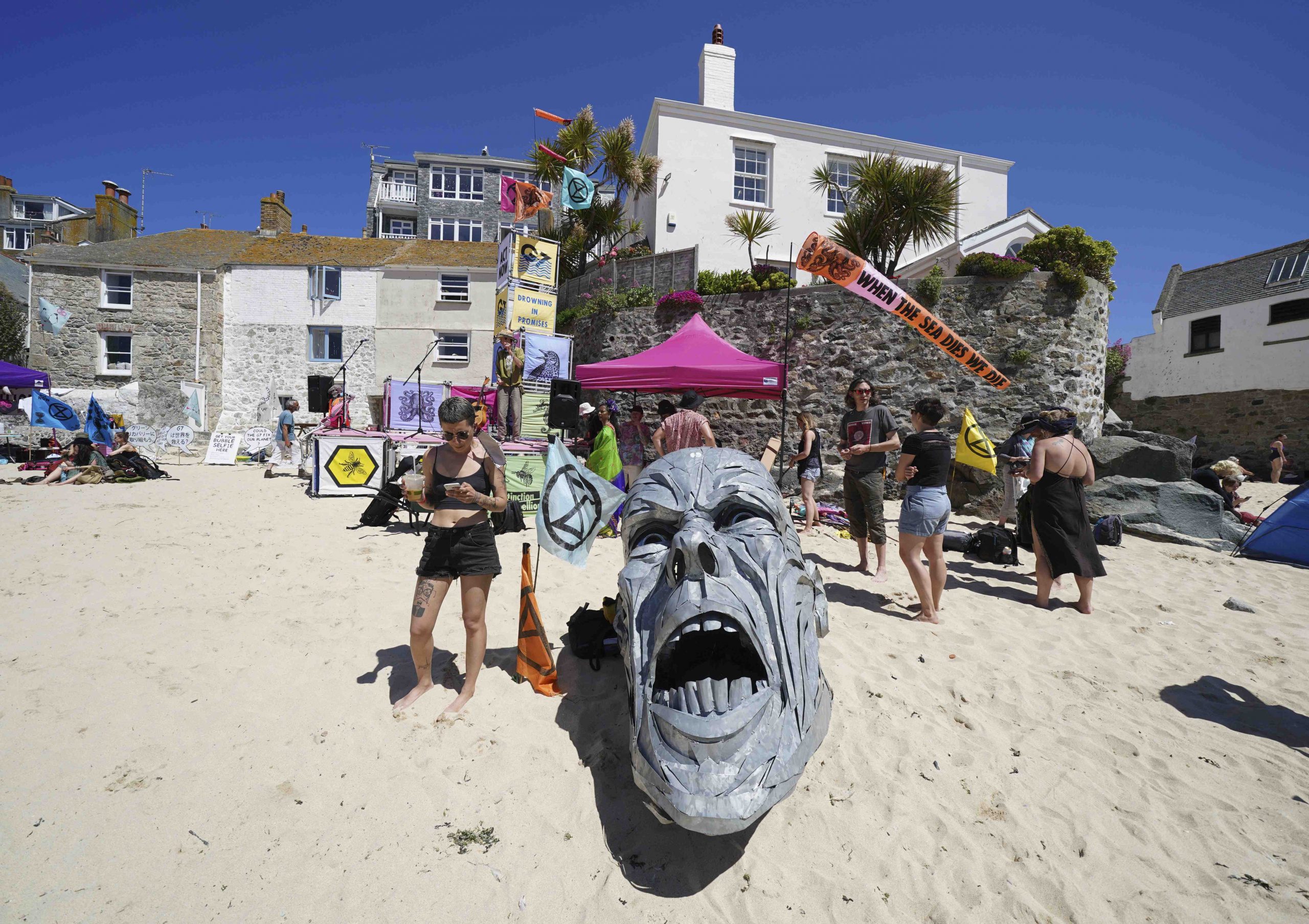 A metal sculpture by artist Ruscoe, which depicts a sinking man, sits amidst sunbathers and demonstrators on a beach outside the G7 meeting in St. Ives, Cornwall, England, Sunday, June 13, 2021. Leaders of the G7 wrap up three days of meetings in Carbis Bay in June 2021, in which they discussed such topics as COVID-19 and the economy. (AP Photo/Jon Super)

A Naïve View of the News Media

In fact, like all businesses, the news media is driven by financial considerations. Media observers and those who have worked in media have noted that the best way to capture the largest audience “is by entertaining the masses, not by enlightening them.”

In particular, “watching and reading about suffering … has become a form of entertainment.” Thus, the line between news and entertainment fades.


News as a Packaged Product

Rather than presenting it as it is, the media managers carefully process the news for its entertainment potential. First, editors pick stories that “they think their audience is interested in.”

Next, the news is “translated into tragic, comedic, thrilling stories that contain aspects of fiction designed to captivate its attention.”

In translating the news into dramatic narrative, stories that evoke fear are particularly useful “as a means of communicating because of [fear’s] unrivaled effectiveness in relaying messages and provoking responses.” Scary stories feed into “the public’s desire to experience temporary scares,” and some suggest that this is why the “public crave frightful news.”

The news as a simplistic narrative is further driven by use of grade-school-level vernacular and cultural points of references to which most can relate. It should be apparent that when the news is reduced to the level of comic books, audiences who have little or no understanding of complex subjects like medical science will act irrationally and miscalculate risk based on misunderstanding.

During a crisis, numerous interest groups— including the business community, professional politicians, public health officials, and non-governmental organizations— burst onto the scene competing for the media’s attention to spread their messages. These messages often contradict one another.

Given the limited resources of news media and editorial direction, “media organizations must consciously choose where, when and how to divide their attention among the various stakeholder groups.” Each “stakeholder group” has a “media management strategy” to “capture the sympathy and attention of the media in order to advance their own agendas.”

Thus, rather than reporting on the actual seriousness of a crisis, “the press plays a proactive role in defining the nature of the crisis”. In creating scary health-related stories, the media will sometimes go as far as altering the news itself: “The media consistently alter the form and content of health authorities’ quotes when ‘creating news’.”

All Too Familiar Songs of the Past

The previous observations concerning news-as-entertainment and crafting news into heartfelt, personal stories may seem like criticisms of the media’s COVID-19 coverage. However, these points were raised by media observers and those who worked in the media following the last coronavirus pandemic that arose from China, in November 2002.

By the time the World Health Organization declared severe acute respiratory syndrome coronavirus (SARS-CoV) “contained” on July 5, 2003, there were a total of 8,096 cases and 774 deaths worldwide. Most of the cases and deaths were in China and Hong Kong.

During the SARS-CoV pandemic, forecasters predicted catastrophic case numbers and widespread death. For example, the largest numbers of cases and deaths in North America were in Canada.

A statistical model published the day before the World Health Organization’s declaration that SARS was contained concluded that by the end of June, 2003 there would be 50,000 cases and over 4,000 deaths— in Canada alone. In fact, in Canada there were, according to the WHO, 251 cases and 43 deaths by the end of July 2003.

One reads of a “mystery virus,” a “mysterious respiratory illness” and “pneumonia-like disease baffling doctors.” Words such as “killer,” “lethal,” “plague” and “mutant” peppered headlines. One even heard nonsensical statements such as that the SARS epidemic was the “new AIDS epidemic,” and this was not from tabloids but from the respectable media.

To one observer of the SARS pandemic, it was “as though a killer was on the loose and the authorities were clueless and directly telling the public to be concerned.” It was not that just a few people were subjected to fear and uncertainty, “The mass media tend[ed] to magnify the latest health concern and broadcast it to millions of people at once.”

That the news media inundated its audience with health scares following the SARS outbreak, from swine flu to new toxins that cause cancer, should not be surprising. Fear sells.

Despite previous and continuous exposure to health scares, the public’s initial reaction to stories of “mysterious,” “killer” COVID-19 was full-blown panic. Previous exposure to fear-driven news failed to immunize viewers.

Why this occurred could be due to a number of factors, such as an us-versus-them, black-and-white political climate, a visceral desire for someone other than ourselves to take responsibility over our lives, and an overwhelming feeling of helplessness in our tech-driven, social media laden world that is rapidly undergoing climate change. Digging into the reasons would make for a great thesis for students of the media.

… But the Government Remembers

However, it appears that U.S. government officials and bureaucrats reaped valuable lessons from SARS and have modified their media management strategy for COVID-19.

During the SARS epidemic, “conflicting messages” attributed to authority figures signaled “dishonesty” — “at least one group of these authorities must be lying.” On the other hand, during COVID-19, there really is no contradiction between the stakeholders alluded to earlier, especially U.S. public health officials, professional politicians, and the business community. Each of these groups demand mandates as a substitute for personal responsibility.

Bureaucrats regularly bear grim news, whether it is an “epidemic of the unvaccinated,” or a new mutant virus, or overburdened hospitals. The media uncritically pushes everyone’s alarmist messages.

One other lesson that the U.S. government learned from SARS is that “media [coverage] sets the agenda for public debate.” Thus, for COVID-19, U.S. authorities confined debate by establishing their agenda— mass vaccination, masking, and lockdowns. The media played along and the narrative was set early on.


Media Fails in Its Mission

Indeed, the news media during the current pandemic has not upheld its self-proclaimed role as the guardian of democracy.

During the SARS outbreak, in Singapore, a nominal liberal democracy, the “stage managed media” became “party to government actions, with articles that defended firm official handling of the crisis.

“This effectively ruled out any public debate on whether the Singapore government’s handling of the crisis was truly exemplary or otherwise.”

A review of, for example, social media as well as U.S. news media should give a sense of the collusion between the media and the state. Criticism of the agenda, no matter how thoughtful, is relegated to the “conspiracy theory” dumpster.

Does the United States still have an independent media, or a state-run propaganda department?

A Sankei Shimbun editorial of August 18, 2021 (Japanese edition August 14, 2021) quietly hinted that the paper was weary of the never-ending “sensational statements” spewing forth from Japan’s public health “academics and experts”.

For indulging these so-called experts, what has the public received in return? More wailing over today’s coronavirus cases and fatalities. One media observer quipped, “the media may not always be able to tell us what to think, but they are strikingly successful in telling us what to think about.”

In response to ceaseless bad news, public anxiety grows and demands by the public to “do something” become increasingly shrill. The cycle of ginned-up fear by an obsequious mainstream media, public uneasiness, and governmental clamoring for more authority perpetuates. Japan is, unfortunately, no exception.


Looking Ahead and Moving Forward

What might be more productive use of public health experts’ valuable time is figuring out why the rates of coronavirus cases and deaths in Japan, despite its low rate of vaccination and high percentage of elderly persons, are much lower than that of other countries with much higher rates of coronavirus vaccinations (e.g., the U.S. and Israel). There must be something that Japan is doing right— and it is not endless masking.

Will the so-called experts in Japan cease hyperventilating and facilitate an end to public anxiety by figuring out why Japan has been so lucky, or right, thus far?

The next nominee for U.S. Ambassador to Japan once stated that one should never let “a serious crisis go to waste.” Perhaps Japanese experts can find it within themselves to turn the current negative into a positive.

RELATED: [Bookmark] COVID-19 and 1300 Years of Pandemic Politics in Japan: What Can We Learn?

Find other thought-provoking essays and reports by Dr. Hama on JAPAN Forward at this link.