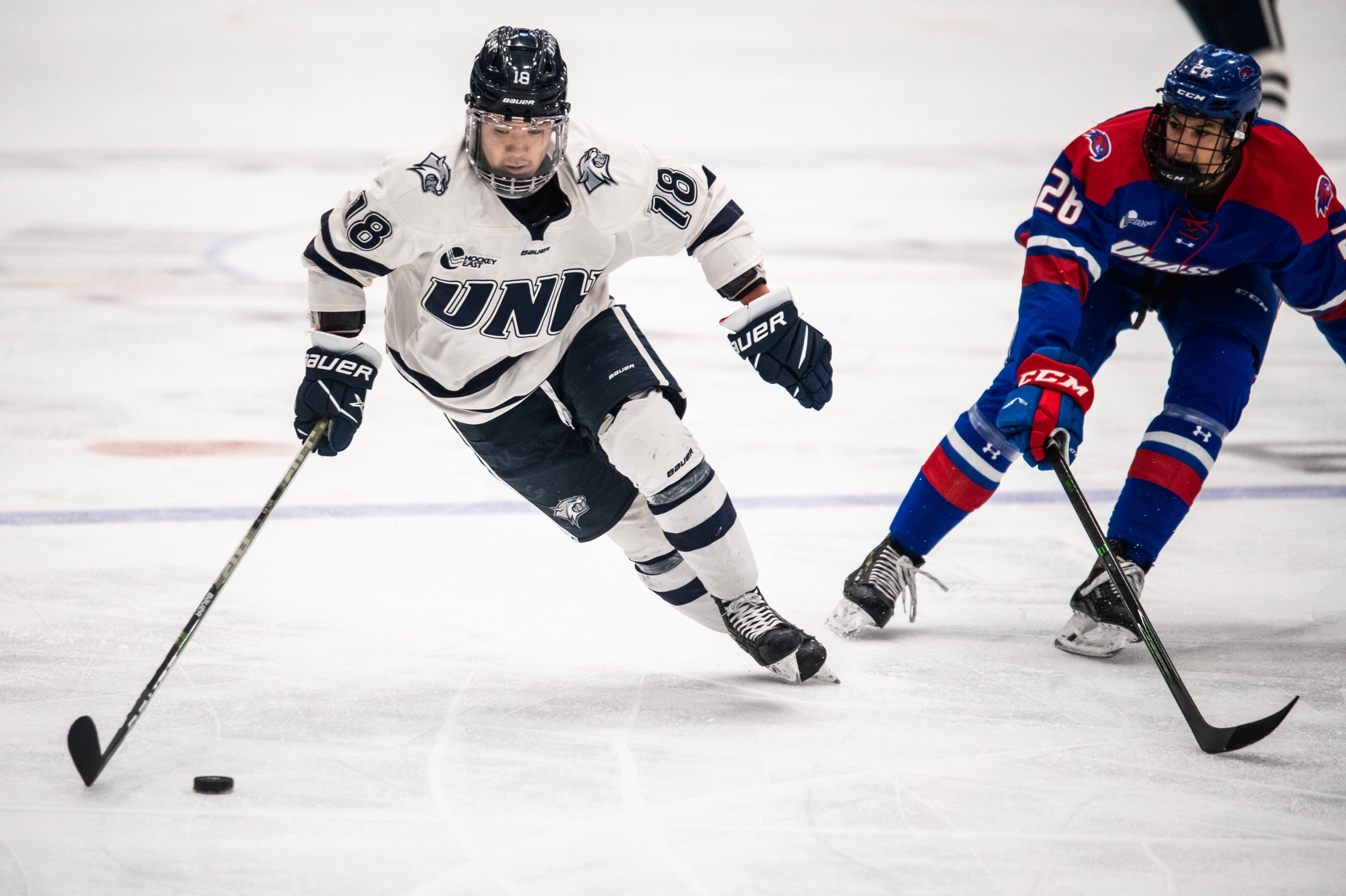 Kohei Sato made up his mind at a young age that he wanted to pursue a career in ice hockey. It wasn’t a spur-of-the-moment decision that disappeared the next day.  Instead, it was a never-wavering commitment.

Clearly, one learns by listening to his stories and doing a little research that the current University of New Hampshire senior forward was determined to do whatever it takes to earn opportunities to play the game he loves.

So, in 2010, the Nishitokyo native moved to Canada, half a world away from his family and friends. He pursued his passion for the game as a student athlete at Harrington College of Canada, a private school in Quebec that gives international students and Canadians the opportunity to develop as players.

As a young teenager, Sato laid the foundation for his hockey career at Harrington College from 2010-12, before moving on to play for the Ontario-based Canadian International Hockey Academy’s Voyageurs. He made the most of his two seasons with the Voyageurs, appearing in 55 games, scoring 32 goals and providing 37 assists. (He graduated from Newman Catholic High School in Mason City, Iowa.)

Then, in 2014, Sato began his junior hockey career, and over the next three years played for teams in Iowa, Pennsylvania and Massachusetts, which ultimately caught the eye of college hockey scouts.

Sato’s successful stint with the Massachusetts-based Northeast Generals of the North American Hockey League, a Tier II junior hockey league, in 2016-17 (14 goals and 22 assists in 48 games), led to an invitation to the NAHL Top Prospects Tournament in February 2017, where 200-plus NHL and college scouts watched and evaluated players during the two-day event in Plymouth, Michigan.

Flash forward to October 21, 2017, a day that will always be significant to Sato. On that day, he appeared in his first college hockey game against visiting Colorado College at Whittemore Center Arena (New Hampshire). By doing so, Sato became Japan’s first NCAA Division I male hockey player. (Lake Superior State forward Yuki Miura, also a senior this season, made his D-I debut the following year in January 2018.)

Indeed, it was a big deal for Sato.

Two years after his first appearance in a UNH game, Sato told the school’s athletics department website that he hopes to be an inspirational figure for hockey players in Japan.

“It feels nice, but I want to do good so people like me growing up in Japan, playing overseas, will be inspired to play here,” Sato was quoted as saying in this story. “Hopefully I can make a path for them.”

I spoke to Sato last weekend, the day before he and his team traveled from Durham, New Hampshire, to Massachusetts to face top-seeded Boston College in the Hockey East Conference Men’s Tournament quarterfinals. The UNH Wildcats, the No. 9 seed, had advanced to the quarterfinals after a 7-2 road win over the eighth-seeded University of Maine on Wednesday, March 10.

Our wide-ranging interview quickly bounced from one topic to the next, not unlike a rapid line change on the ice. What was a constant during our 30-minute chat via Zoom was Sato’s gratitude for the opportunities he’s already had as a player and his genuine love of hockey. It was inspiring listening to him share stories about his appreciation for the chance to play at an NCAA Division I University with a rich tradition of hockey (the team has competed since 1925) on a beautiful campus.

Boston College defeated UNH 3-2 on Sunday, March 14 in Chestnut Hill, Massachusetts (near Beantown). Sato had a second-period assist in his 102nd and final game for the Wildcats. He finished with one goal and seven assists as a senior. He had his best season for UNH in 2019-20, with seven goals and 10 assists in 32 games.

A sociology major, Sato set high standards for himself as a student on and off the ice, and the hard work paid off. He was named to the Hockey East All-Academic Team in 2018-19 and 2019-20) and also continued his upward trajectory as a player (he earned UNH’s 2019-20 Most Improved Player Award).

In a shortened 2020-21 season due to COVID-19, UNH had six wins, 14 losses and three ties. A normal season begins in October. This season, Sato and his Wildcats teammates didn’t play their first game until December 11.

But through it all, the 24-year-old embodied leadership on the ice.

“Being an example for younger guys, with my play as well as working hard [was important],” Sato told JAPAN Forward’s ODDS and EVENS. “I don’t have a lot of points this year, but I believe that I make other people look good and look better. I compliment my linemates as much as I can. That’s been my contribution this year so far.”

Sato admitted that he was proud of how his team dealt with the obstacles they faced this season.

“It was a unique season with [COVID-19] around,” said Sato, who had a positive coronavirus antibody test last August. This required self-isolation, but he hasn’t tested positive for the virus since then.

“It was definitely a tough season being away from home. Everyone couldn’t go home for the holidays. We had to quarantine and stop, pause for a couple weeks, for about a couple times  ― guys in and out, people in a hotel isolated from your roommates and people that are affected. So it was definitely a lot of stress on those who had to experience it that way.”

That said, Sato realized that he had a special opportunity to compete in 2020-21 amid the pandemic.

“I’m always blessed to play at such a high level,” he told me before facing Boston College. “Division I hockey in America is a pretty big deal over here, so I am honored that I still get to play and I still get to represent UNH.”

Speed Is His Trademark

It shouldn’t be a huge surprise that Kohei Sato’s most noticeable skill on the ice is his speed.

After all, family genes have helped define Sato’s hockey career, and quick bursts of speed down the ice are one of his trademarks.

His father, Masahiro, played professional hockey in Japan. His paternal grandfather, Tsuneo, represented Japan in the 1952 Oslo Winter Olympics as a speedskater.

His grandson can’t recall vivid details, but remembers as a boy hearing his father telling him stories about the family patriarch’s Olympic experiences.

“I only heard a little bit about it, but I was young,” Sato told ODDS and EVENS. “But my dad was saying that it was like nothing he ever experienced before.”

Not surprisingly, Kohei admitted that his late grandfather would be “one of the guys I’d want to have dinner with if he was alive, to pick his brain.”

Like his grandfather decades ago, Sato relies on speed to compete successfully as an athlete.

But he doesn’t want to be seen as a one-dimensional player, so he’s worked to elevate his game.

On offense, he’s improved moving with or without the puck, and “just being in a position where I can get the puck,” Sato explained.

On defense, he learned to focus on using his speed “more effectively” by putting himself in better positions “to get the puck more.”

In terms of his development as a better all-around player, Sato credits the UNH coaching staff for its collective hockey wisdom. “I believe that UNH has done a tremendous job to make me a smarter player,” he declared.

It isn’t an earth-shattering revelation that Wildcats head coach Mike Souza, who completed his third season at the helm on Sunday, knows that Sato’s speed was a difference-maker for the team.

Souza said as much in an October 2019 interview with Foster’s Daily Democrat, a New Hampshire newspaper.

“[His speed is] a huge asset for us as a team,” Souza told the newspaper. “It’s not necessarily just his pure speed. It’s his play away from the puck, being in position to allow him to get the puck with speed and to utilize that speed. I think he’s done a nice job trying to apply that to his game.”

In addition to his Canadian scholastic, junior hockey and university experiences, Sato experienced the thrill of competing for the Japan men’s national team in a prestigious event.

And for the 185-cm (6-foot-1) left wing from Kanto, the chance to participate in the International Ice Hockey Federation’s 2019 Ice Hockey World Championship in Tallinn, Estonia, represents a special chapter in his hockey career. Sato had two goals and two assists in five games at the world championships. Last weekend he called that tournament “one of the coolest moments in my life.”

Curious as ever, I wanted to know this: Does Sato want to keep playing for Team Japan in the future?

“As long as they select me, I would love to be on that team to represent my country and my family,” he confirmed.

Sato said he is encouraged by the progress that Japan has made in recent years developing men’s hockey players, including promising 17-year-old prospect Aito Iguchi, who is considered a potential future NHL player.

“We’ve just got to keep going and think about the next generation and those people that want to play and make them want to play [overseas],” commented Sato, who mentioned that one of his father’s prized hockey possessions was an Anaheim Ducks jersey  ― and not just any jersey, but former NHL star forward and Japanese-Canadian Hall of Famer Paul Kariya’s.

“If it is hopeful, then more kids are going to want to play.”

Looking ahead, Sato aims to start playing hockey at the pro level in North America. His ultimate goal is to follow in the footsteps of former Los Angeles Kings goaltender Yutaka Fukufuji, who became the first Japanese to appear in an NHL game on January 13, 2007. The goalie only appeared in four games in the world’s premier hockey league that season. Fukufuji remains the only Japanese to play in the NHL.

“I hope I can be one of the pioneers,” was the way Sato described his lofty future ambition.