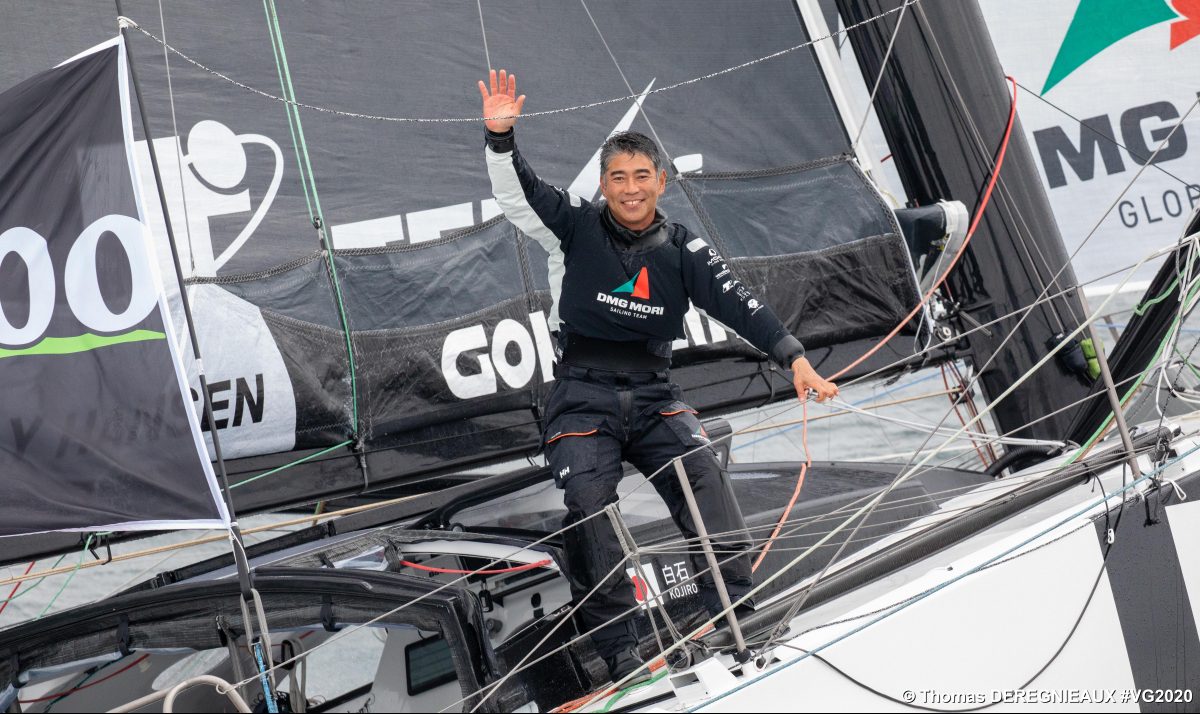 Nobody can accuse Kojiro Shiraishi of lacking ambition.

Before you Google his life story or call a friend to ask who the heck this guy is, let the 53-year-old from Kamakura, Kanagawa Prefecture, spell out why he is fired up about competing in the 2020 Vendée Globe:

“I want to show the Asian people across the world what a beautiful race the Vendée Globe is,” he recently said, according to the race’s website. “And also, I want to share with all people the importance of never giving up.”

Shiraishi is one of 33 solo sailors awaiting the start of an event dubbed “the world’s toughest sailing race.” The nonstop race begins on Sunday, November 8 at 1 p.m. (local time) in the Bay of Les Sables d’Olonne, France.

Many weeks later, the winner will be crowned in the same bay upon completion of the 21,638-mile race (34,823 kilometers).

The official teaser video for this year’s event, a mesmerizing preview, can be seen here.

This year’s cast of skippers ranges in age from 27 (Alan Roura of Switzerland) to 61 (Frenchman Jean Le Cam, who’s making his fifth appearance) and includes six women, the most in the event’s history. In a short video posted online this week, North Sails’ YouTube channel profiled the six women, with English subtitles at the bottom of the French language broadcast.

Shiraishi is embarking on his second appearance in the Vendée Globe. 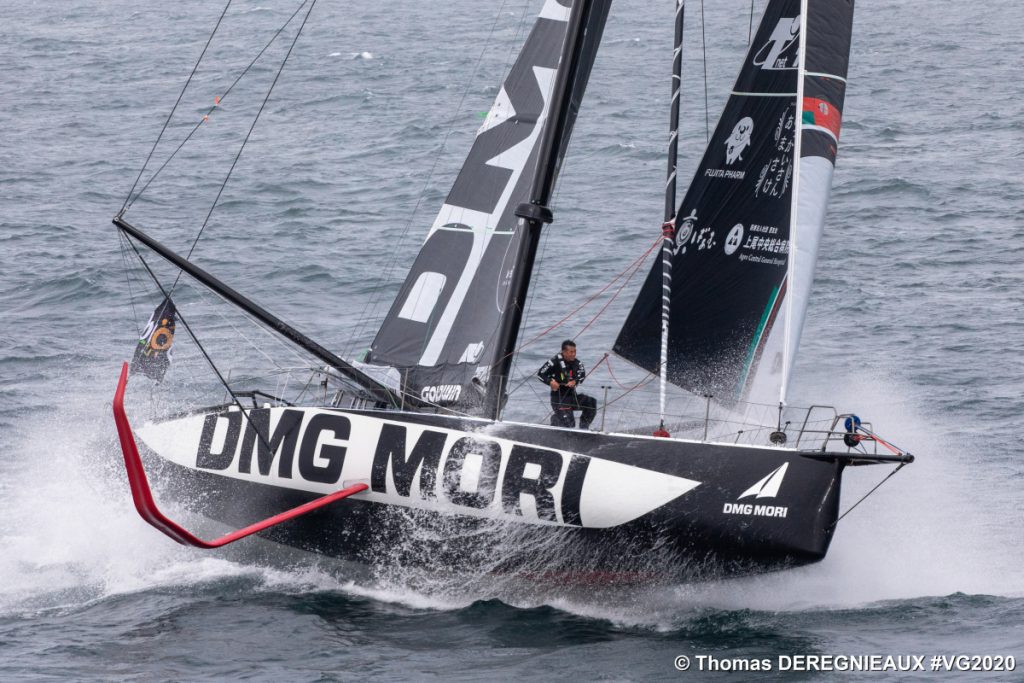 In an online news conference on Tuesday, November 3, Shiraishi expressed interest in making this global odyssey again in 2024-25: “Right now I do … but ask me again at the finish of this race.”

Shiraishi loves his job. He also loves life on the open sea. It defines who he is.

In the run-up to the Velux 5 Oceans Race, another around-the-world extravaganza, in 2017 Shiraishi explained why he is so passionate about his occupation and so appreciative of the chance to pursue this lifestyle.

“Whether I can win is really up to God and that all I can do is everything to the best of my ability,” Shiraishi said at the time. “I really never, ever feel alone or lonely at sea.

“For me, the sea is what I have been aspiring for since I was a kid; it’s something amazing and it shows you beautiful and very dynamic sceneries. The sea is my mother and my father, and to be able to learn from the sea is a blessing for me…” 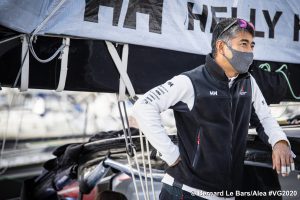 Kojiro Shiraishi made his Vendée Globe debut in 2016.

Shiraishi made his Vendée Globe debut in 2016, navigating Spirit of Yukoh, a monohull named in honor of his mentor, Yukoh Tada, who killed himself in 1991 after pulling out of the BOC Challenge, which later became known as the Velux 5 Oceans Race.

But on the 27th day of that race, the graduate of Kanagawa Prefecture’s Kanagawa Misaki Fisheries High School and Yokohama National University was forced to exit the race south of the Cape of Good Hope that December due to a damaged masthead.

Describing the problem at the time, he said:

I heard the mast break from inside of the boat. I quickly went outside to check the damage but the mast had broken in half above the second spreader. I was able to remove the broken piece and I will need to go up again to do some cleaning. The wind was 20 knots (23.0 mph) at the time I dismasted. I’m OK. I don’t need any assistance, and I am heading for Cape Town. I am sorry for everyone who supported me in this journey and would like to particularly thank my sponsors for their kind support. 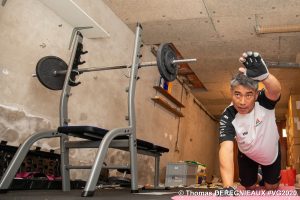 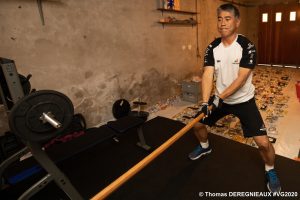 Kojiro Shiraishi works out in preparation for the Vendée Globe on October 1.

With better equipment and technological advances since the inaugural Vendée Globe in 1989-90, the race time from start to finish has dramatically improved. Hugo Boss skipper Alex Thomson is predicting this week that the upcoming odyssey could be held between 59 and 70 days, depending on the weather.”

So what is behind Thomson’s beliefs and the speed revolution over the past few years?

The  International Monohull Open Class Association (IMOCA) 60-foot (about 18.3-meter) yacht’s design has been overhauled to include foils. Sailuniverse.com reported on the changing technology in an illuminating article that spelled it out this way: “These ‘underwater wings’ lift the boats above water to deliver seemingly impossible speeds for these 60-foot carbon monohulls. The 2016 edition saw the start of this technological shift. The 2020 edition sees this technology having made significant advances in foil shape, form and structure but also in corresponding hull design and structure with boats now designed and built specifically to foil, to fly above the sea’s surface for protracted periods.”

For the 2016 race, there were seven sea vessels with foils. This year? Nineteen of the 33 monohulls have them.

But before we envision how this year’s race will unfold, let’s revisit the event’s history. In the inaugural race (1989-90), Jean-Francois Coste was the final finisher, completing the epic journey in 163 days. Fellow Frenchman Titouan Lamazou won it in 109 days, completing the quest on March 16, 1990.

Since 1992, it’s been a quadrennial extravaganza, with French skippers winning it each time.

François Gabart claimed the 2012-13 title in 78 days, while  Armel Le Cléac’h was No. 1 in 74 days, 3 hours, 35 minutes and 46 seconds in January 2017, completing the 29-vessel race that began on November 6, 2016, in France. The event moved in a southern route, passing by South Africa’s Cape of Good Hope before reaching Australia’s Cape Leeuwin and Chile’s Cape Horn and then continuing in a northerly route toward France.

Le Cléac’h secured the victory with a time-honored strategy: a quest to be the best while performing at the highest level possible. Or as he put it before the journey began: “It is the sailor, who makes all the difference. The one who comes out on top will be the one, who makes the fewest mistakes. We are setting off as pioneers, as no 60-foot monohull has ever sailed around the world with foils. I am one of the favorites, but I’m not the only one.” 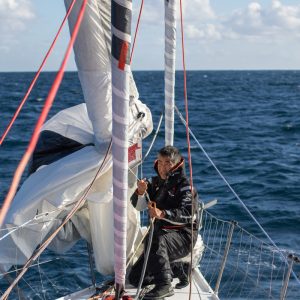 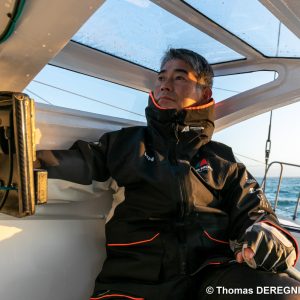 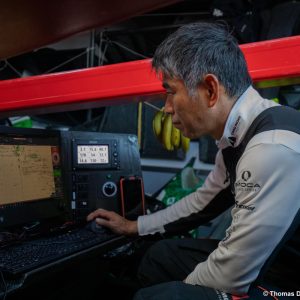 Kojiro Shiraishi has prepared for the Vendée Globe on land and on sea.

The unfolding drama, featuring Kojiro Shiraishi and his 32 Vendée Globe rivals, will test the innovations in foils and how they impact the overall racing.

Le Cléac’h told reporters this week that innovations in sailing have triggered new challenges for him and his counterparts.

“Four years ago we were just in the early stages of these new appendages, “the defending champion said of the foils. “But the surface areas have changed a lot. In the end it is logical that, as with every Vendée Globe cycle, speeds increase and so everything progresses. Autopilots, data sensors and closed cockpits, everything is targeted at delivering or living with more speed. But at these speeds, the boats are transmitting big slams and shocks and the skippers have to adapt to this extreme level of discomfort.”

The DMG  Mori Sailing Team, led by team manager Shiraishi, has been preparing for this race since its launch in October 2018.

Shirashi is proud of the work that the sailing team did to get ready for the Vendée Globe, and its DMG Mori Global One boat is a direct reflection of that pride.

“The boat has a great spirit because every single team member put all their hearts and effort in it,” he told reporters this week. “I thank the team for all their hard work, now it is my turn to sail the boat.”

So get ready for drama and adventure on the open seas.