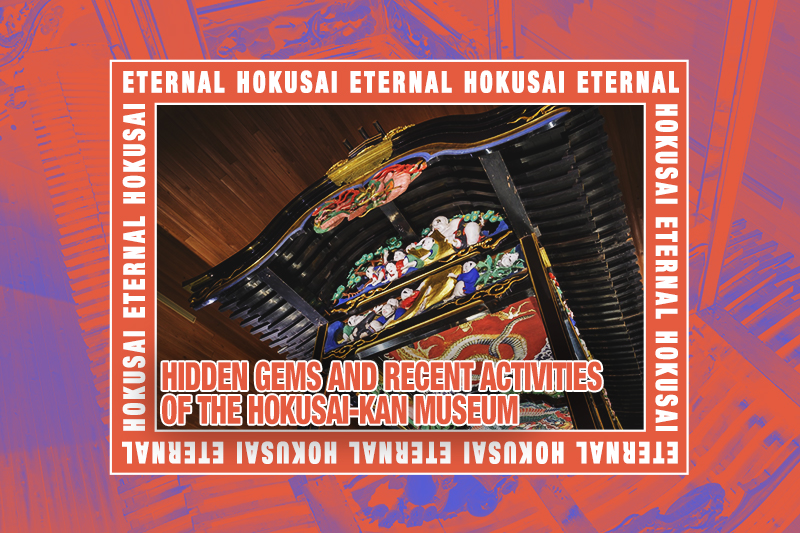 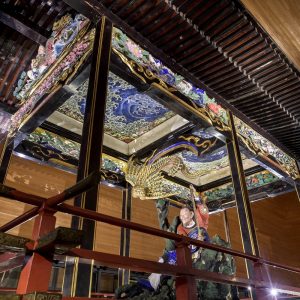 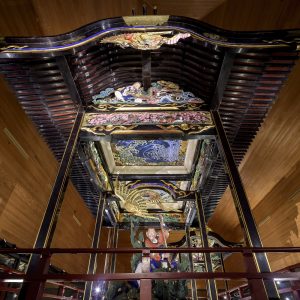 The ceiling panels of a festival float painted by Hokusai 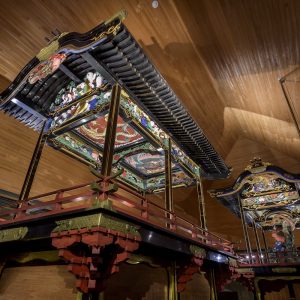 Two ceiling panels of the other float painted by Hokusai

Hokusai painted four ceiling paintings of two festival floats in his later years. Large waves are featured in one of the floats, and a dragon and a phoenix are the center of attention in the other.

The Hokusai-kan Museum Nagano Prefecture, opened in 1976 with the main purpose of preserving these four incredible works of art. The museum has not received any local support or corporate sponsorship, so the collection has been expanded through admission fees and other ways. The range of works now in the museum’s collection is diverse, including paintings, woodblock prints, illustrated books, and privately-sponsored prints (surimono). This year marks 44 years since its founding. 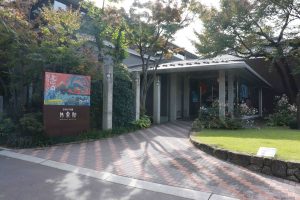 I was appointed as the director of the Hokusai-kan Museum in 2017. The first thing I did after I became museum director was to get a full picture of the collection. However, even though works were labeled, I could not find out where they were stored.

Therefore, my first task was to reorganize the collection in storage, separating donated works and the regular collection, assigning shelf numbers, and creating labels with photographs of each of the paintings, woodblock prints, illustrated books, and privately-sponsored prints (surimono). Although the museum’s collection had been centered on Hokusai’s paintings, there were a surprisingly large number of prints and a wide range of illustrated books in the museum’s collection as well.

The next step was a scholarly evaluation of the collection. We were able to reorganize the collection with the active cooperation of young curators, but the collection of rare prints, books and paintings required specialists for each genre. Therefore, I asked the board of directors to invite experts to Obuse and bear the costs of several days of research. 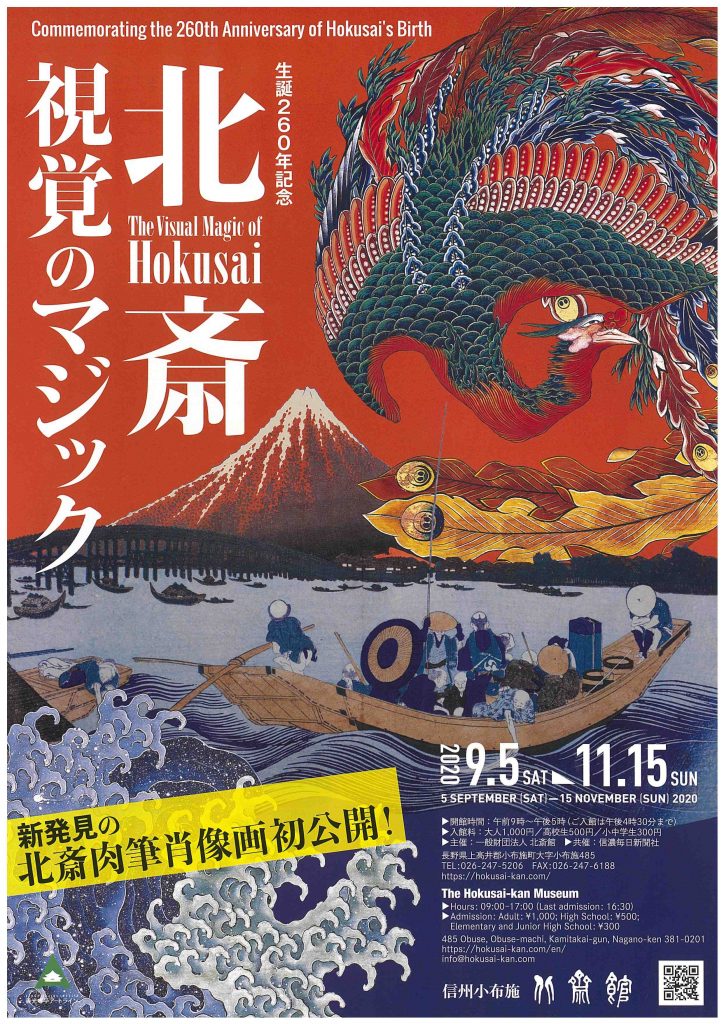 There were two particularly impressive discoveries. One was the uncovering of a rare comical poetry (kyōka) book, Spring Dawn, for which both Hokusai and Kitagawa Utamaro (another celebrated ukiyo-e artist) provided illustrations. The other was the discovery of two sets of rare first editions of One-Hundred Views of Mount Fuji among a collection of printed books purchased by the Museum as a set.

Through this research, I was convinced that we would be able to hold an exhibition of the Hokusai-kan Museum’s masterpieces, so I proposed to Hashimoto Mitsuaki, Director of the Sumida Hokusai Museum of Art, that we exchange our collections for an exhibition. The following year, 2019, was the 120th anniversary of Hokusai’s death, and a commemorative event.

In November 2019, the Sumida Hokusai Museum of Art organized the exhibition Visual Magic: Exhibition of Masterpieces from the Hokusai-kan Museum, Commemorating the 170th Anniversary of Hokusai’s Death. In addition to the five specialists in each field who were involved in research of the works, I wrote explanations and commentaries on the paintings, and three curators of the Hokusai-kan Museum also contributed texts. 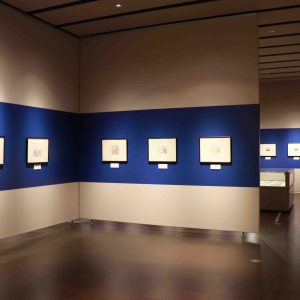 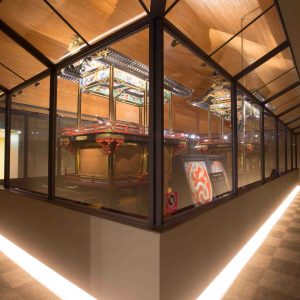 Exhibits inside the Hokusai-kan Museum 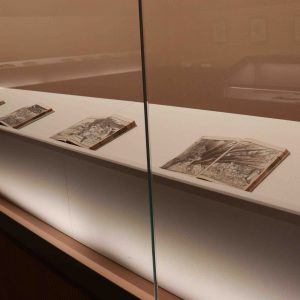 Therefore, the Hokusai-kan Museum decided to hold the same exhibition in September 2020 in Obuse. In conjunction with the exhibition, the Hokusai-kan Museum decided to create an English-language version of the catalog, which had been a longtime dream of the museum. A proposal to the board of directors to translate the catalog into English was approved and is currently in progress.

The board also agreed to another exhibition I had been planning, sharing Hokusai’s four ceiling paintings in the exhibition The Pioneers: Masters of Edo Painting. The exhibition was organized with the Yomiuri Shimbun Newspaper and toured from Tokyo to Yamaguchi prefecture and Osaka.

The exhibition was to be held at the Edo-Tokyo Museum from April 2020, but was shortened to three weeks in June because of the COVID-19 pandemic. In July and August, the exhibition traveled to the Yamaguchi Prefectural Museum of Art, and in September, October and November it ended its tour at the Abeno Harukas Museum in Osaka. 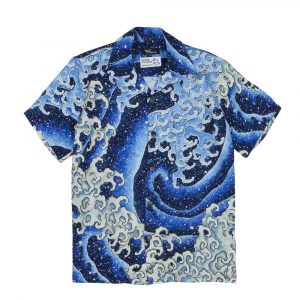 Another happy event also occurred recently. Near the end of 2019, an individual in Gunma Prefecture donated one of Hokusai’s paintings to the Museum. It is an important portrait of a person named Kamiyama, known to have been painted in 1803, when Hokusai was 44 years old.

Neither the real name nor the business of this Kamiyama was clear from the calligraphy by Asakusa’an Ichihindo inscribed above the portrait. Since the painting was damaged and stained, we first had it restored so it would be possible to identify its commissioner before exhibiting it at The Visual Magic of Hokusai: Commemorating the 170th Anniversary of Hokusai’s Death, held at the Hokusai-kan Museum from September to mid-November, 2020.

A few months later, we learned that the man in the portrait was the 46-year-old Kamiyama Kihei, a money changer of Kōzuke Ōmama. The name of the artist mentioned in the poem, Itchō Hakari, turned out to be his own. The TV program Ukiyoe Five on BS TV Tokyo, in which I was scheduled to appear, was aired on August 30, and this was the first time we showed the painting on TV. (An acquaintance from the Asahi Shimbun Newspaper had written an article about the portrait in July.)

For the filming of this program and other television recordings, I have been wearing Aloha shirts and silk shirts with designs from Hokusai’s ceiling paintings of Waves, which we launched as museum merchandise in 2019. After these were broadcast, there was an increase in online orders, meaning I had turned into a living advertisement.

These dynamic Waves from the festival float ceiling paintings are an essential part of Hokusai’s oeuvre. From now on, I want to become like the “Great Wave” from Hokusai’s Thirty-Six Views of Mount Fuji and spread Obuse’s Waves around the world.

Exhibition: “Welcome to the World of Hokusai, an Old Man Mad About Painting”!

Access: Public Transportation (train and bus) and private vehicles (parking on site). Details here. The museum is accessible to wheelchairs.

Toshinobu Yasumura is the Director of the Hokusai-kan Museum in Nagano Prefecture.