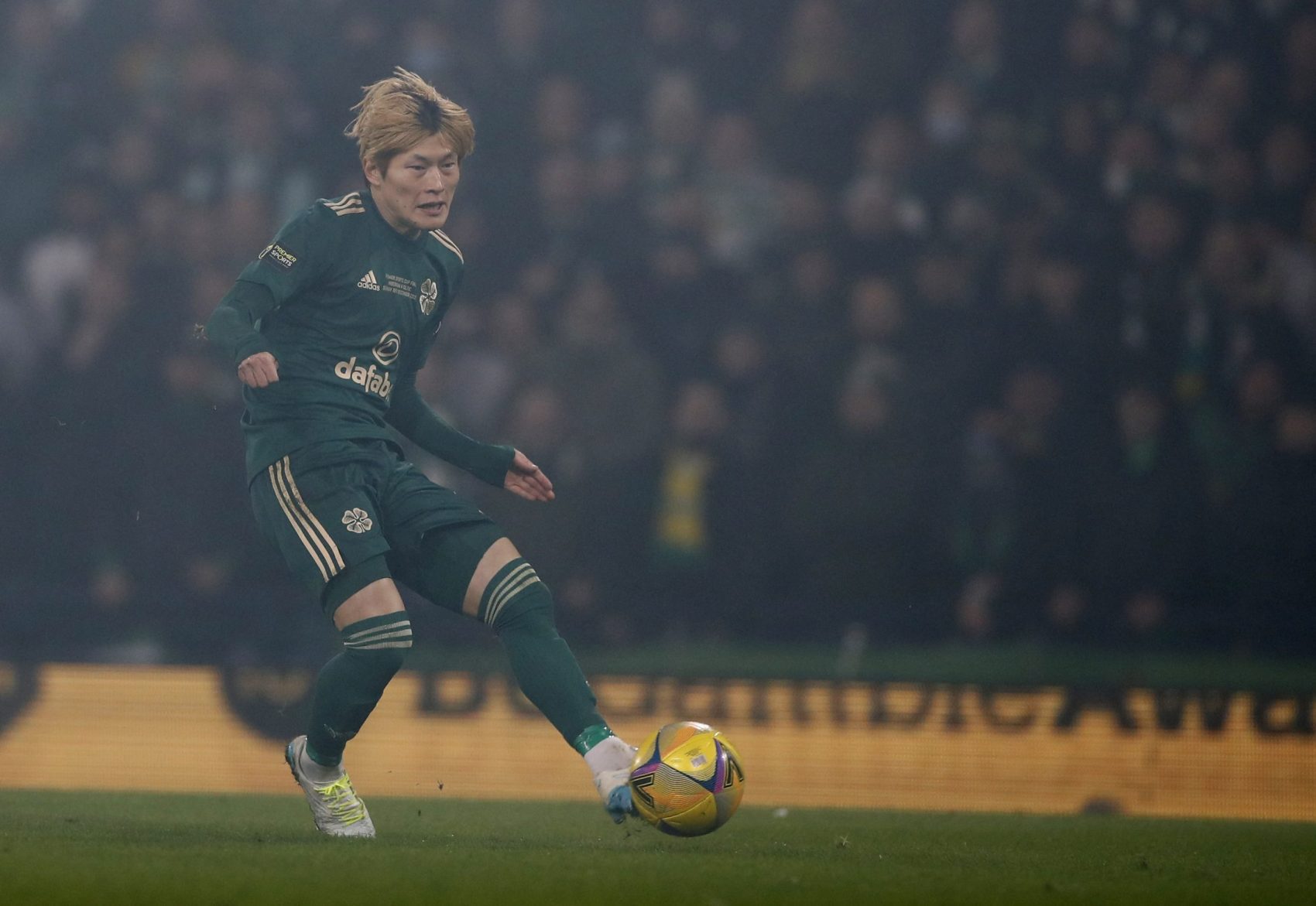 “You can’t knock on opportunity's door and not be ready,” pop singer Bruno Mars once said.

Kyogo Furuhashi gets paid to score goals. It’s a challenging and exhilarating way to make a living.

Scottish Premiership club Celtic manager Ange Postecoglou, formerly the boss at Yokohama F. Marinos, witnessed Furuhashi’s attacking skills and smart, aggressive offensive instinct while the latter played for the J. League’s Vissel Kobe. Both men were with their former teams from 2018-21, a time span in which Furuhashi scored 42 goals in 95 appearances (all competitions) for Vissel.

In Postecoglou’s new coaching challenge, putting Furuhashi in a position to thrive is one of his key tasks. Which means getting the ball to the 26-year-old in the right place at the right time.

In other words, the right opportunities are important for Furuhashi to maximize his minutes and make the biggest possible impact for Celtic.

The results have been impressive for the Nara Prefecture native and the Glasgow-based team.

The elusive striker has now tallied 16 goals in 25 matches in a Celtic uniform, providing a gigantic spark for the club in the Scottish Premiership, Europa League and League Cup. Furthermore, Furuhashi’s name is now mentioned on a far more frequent basis by reputable football pundits (and fans) when the topic of elite scorers is discussed.

After sustaining a hamstring injury against Real Betis in a Europa League match on December 9 that forced him to miss Celtic’s next two matches, Furuhashi came up big against Hibernian.

And prominent media outlets and pundits have showered praise on the Greek Australian manager for convincing Furuhashi to join Celtic and guiding his rising star.

Or as ex-Celtic goalkeeper Pat Bonner told BBC Sportsound after the League Cup final: “Postecoglou deserves huge credit for bringing in a superstar in Kyogo. He spotted him, nurtured him and turned him into an absolute icon of the sport within a few months. Normally that takes years.”

There are times when managers are absolutely convinced that a certain player is a must-sign addition for a team. In Furuhashi’s case, that was how Postecoglou felt when he took over at Celtic.

He explained his assertiveness on the matter after lifting the League Cup trophy at National Stadium.

“Kyogo was always going to be my first pick because I had witnessed at first hand what sort of player he was,” Postecoglou was quoted as saying by British tabloid Daily Mail. “I had no doubt he would be successful.”

Without wingers Jota and James Forrest and strikers in Giorgos Giokoumakis and Albian Ajeti, Postecoglou’s goal scoring options were far from optimal.

Injury-plagued Celtic’s chances of beating Hibernian might have appeared doubtful, but the team’s manager had faith in Furuhashi to be the biggest difference-maker.

And Furuhashi capitalized on the opportunity with a quick strike a minute after Hibernian’s Paul Hanlon had given his squad a 1-0 lead in the 51st minute.

A second Furuhashi goal in the 72nd minute demonstrated the game-changing power of the Japanese striker’s speed.

Tom Rogic’s sharp pass sailed over the heads of Hibernian players and Furuhashi completed the scoring opportunity “with a breathtaking lob over the ‘keeper and into the net,” celticfc.com proclaimed in its match report. “It was a goal worthy of winning any cup final and so it proved.”

Postecoglou paid tribute to Furuhashi after the match.

“From the moment he picked up the injury there was no way he was not going to play today, irrespective of what I was saying or the medical team were saying,” the Celtic boss said, according to Daily Mail. “'He wasn't 100 percent but I knew he would play.

He added: “To have that composure in such a big game ー they are two world-class finishes in a big game.

“He knows that everyone is watching him and that's one of the challenges we had. We are missing some significant talent at the moment, but these boys keep finding a way.”

Enjoying the Spotlight in Scotland

Furuhashi has embraced the spotlight and the zealous support from the team’s fans.

For Furuhashi, Celtic victories are a celebration of the club’s performance and the fans’ constant presence at the stadium.

Which was visible to anyone with access to Furuhashi’s Twitter feed in the aftermath of Sunday’s match against Hibernian.

We are the champions! 🏆
I am so happy to win the first title with @CelticFC! Proud of this team! This is for you, Celtic fans! Thank you for your support!🍀 pic.twitter.com/9d6tUz6RpM— Kyogo Furuhashi 古橋 亨梧 (@Kyogo_Furuhashi) December 19, 2021

Furuhashi endeared himself to Celtic fans quite early in his tenure with the club. He notched a goal in his first start in a Europa League clash with Jablonec on August 5, then scored a hat trick against Premiership foe Dundee three days later.

Indeed, we are witnessing a player and a team that form an ideal partnership. Or as Postecoglou declared in the euphoric afterglow on Sunday: "This football club and him are a match made in heaven."

In an interview this week posted on Celtic’s official Twitter account, Furuhashi responded to questions submitted via the social media platform from fans.

“Yes, of course I knew about Celtic,” he said about his awareness of the team before he donned the club’s uniform in a match. “Shunsuke Nakamura left a great legacy playing well for such an amazing club [from 2005-09], so before I joined I knew Celtic had incredible supporters.

“I was shocked when I realized I had an opportunity to join such an amazing team.”

Kyogo Furuhashi is authoring his own legacy at Celtic, and the first chapter of that tale is an amazing one.