Storms and Protests During the First Month of Taiji’s Dolphin Hunts, Minus the Foreigners 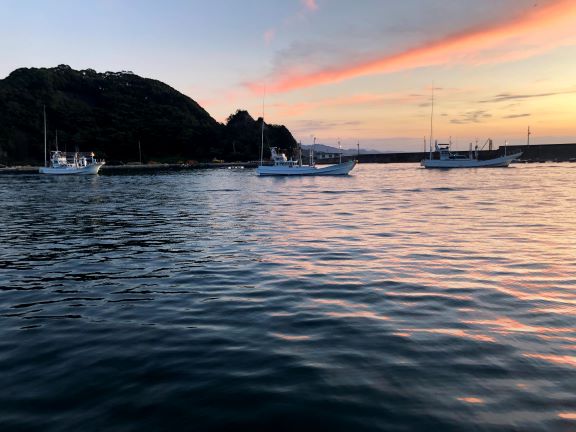 Perched on the southern tip of Japan’s main Honshu island, Taiji has long been a whaling base. But it is best known for its local dolphin drives, which begin each September. A small group of local fishermen prowl the local waters for pods of approved species, then drive them into shore to be killed for meat or captured live for sale to aquariums in Japan and abroad.

Protestors have been coming to Taiji for nearly half a century to decry the hunts. Most travel from the other side of the hemisphere, where intentionally killing a dolphin is almost unthinkable, a cruel environmental sin.

The Taiji hunters, many of whom are themselves former whalers or family members of whalers, take offense at the attack on their way of living, a part of their local culture and tradition. They even named their union “Isana,” or “brave fish,” the ancient word whalers once used to describe their prey.

Year after year the debate has gone on – Western ideals versus Japanese tradition. In 1980, the Associated Press reported that the “director of the Greenpeace Foundation conservationist group has offered to pay $850 for some 200 whales caught by Japanese fishermen.” Forty years later, Kyodo News noted the start of the hunt earlier this month, describing Taiji’s “traditional ‘drive-hunting’ method that animal-rights groups at home and abroad have labeled as cruel.”

In recent years, September protests against the hunts have popped up around the world. Female activists in Paris strip down and pose as bloodied dolphins in front of the Eiffel Tower, while in London they inflate a giant mylar dolphin in front of the Japanese embassy.

One common interruption to the debate has been the massive storms that parade up from the Pacific. September is typhoon season, and each year a string of violent tempests chase away summer and batter the town’s ancient streets with swirling wind and rain. When they come, there is little for the local activists or hunters to do but hunker down and wait. The old wooden houses that line the main streets of the town, many over a hundred years old, shrug off yet another season of storms, and Taiji’s harbor shields the local boats from the raging sea.

But this year has been different – Taiji has largely been spared both types of storms.

Typhoon Haishen, which battered southern Kyushu with record-breaking winds, veered off before it reached Taiji, while Typhoon Dolphin, once predicted to run directly over the town’s own dolphin pens, largely petered out before it arrived. 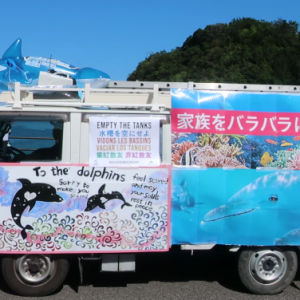 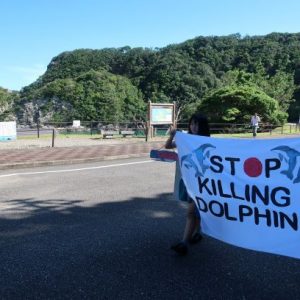 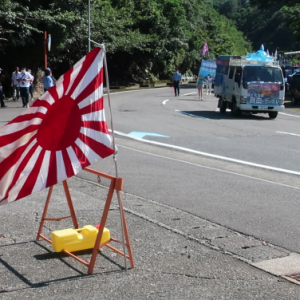 While rarely featured in media coverage of the town, September is also the beginning of Taiji’s autumn festival season. Every year, members of local dance troops assemble each night under the bright moons for which the month is famous, to drink and laugh and occasionally practice as well, their revelry slowly building as the festival approaches.

These dancers will don red lacquer lion-head masks, blessed at Asuka Shrine in the center of town, becoming human vessels that crisscross the town, dancing away tragedy and inviting good fortune for local households. Hours and bottles of sake later, they’ll carry the main local deity on its annual trip through the narrow streets of town, singing and chanting before plunging into the purifying ocean.

But the festival too has been canceled due to coronavirus, and Taiji has experienced one of the quietest Septembers most locals can remember. No foreign protestors, no storms, no drunken dancers … but still the hunt goes on.

“Well, it doesn’t really affect us,” one dolphin hunter said, “we go out to sea as normal, just like we do every year.” 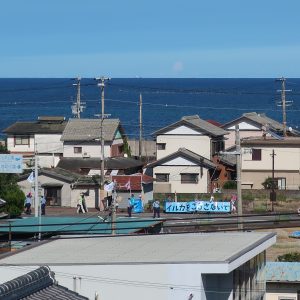 A view of Taiji with quiet protesters (Jay Alabaster) 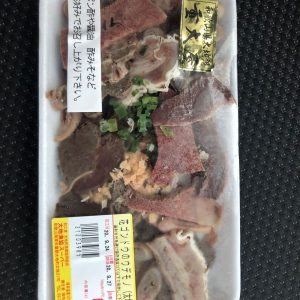 Civilized Discussion from Both Sides for a Change

While most foreign activists were unable to get into the country, a growing cadre of domestic activists, increasingly active in recent years, has taken up the mantle. Several dozen showed up on an organized march through Taiji the day before the hunt began, wearing T-shirts promoting veganism and rattling the quiet town with Japanese chants amplified through a speaker truck draped with protest posters and topped with a blue inflatable dolphin:

Show love for dolphins and whales! They are our symbol of hope!

Not to be outdone, a smaller group of Japanese followed closely behind with their own car-mounted loudspeakers, separated from the pro-dolphiners by a nervous line of policemen. They blasted out their own messages to the activists:

You need to study more about dolphins and whales, and Japan’s food culture! Your march is meaningless!

Eventually the protests wore down. As tired marchers from both sides gathered in a parking lot, someone proposed a debate between the two sides, given the rare circumstance that everyone present was Japanese.

Three representatives from each side squared off at Taiji’s only independent restaurant “Shippo” (“Tail”), where the menus feature dolphin sashimi and fried whale. The contents of the debate were much the same as had been blasted over the loudspeakers previously – sympathy for dolphins versus respect for food culture and tradition – although on much friendlier terms.

“The parade is just for show,” an activist on one side told me.

“We come to Taiji because that’s what gets attention on social media,” one from the other side said. 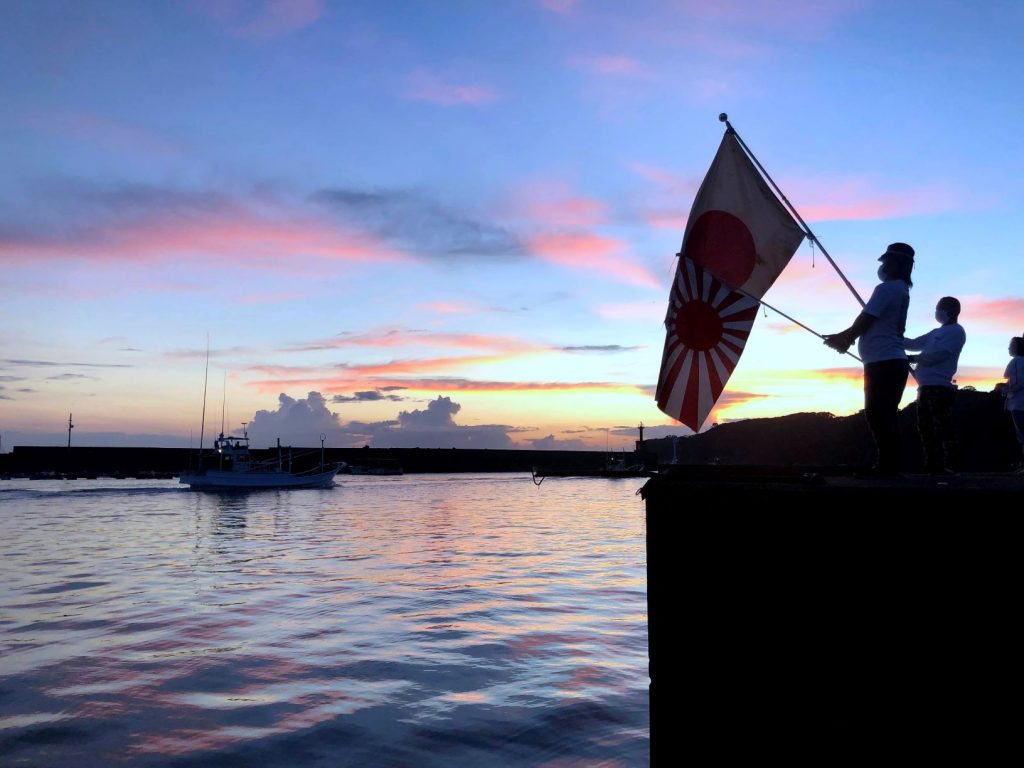 Ships depart the port in Taiji for the annual dolphin hunt, with a send-off from Japanese holding the Japanese naval ensign and Hinomaru flags

The Hunt Goes On

The next morning it was time for the hunts. September growled to life just before dawn with the sound of a dozen hunters’ engines, and the boats set out in a single-file line, just as they will nearly every morning for the next six months.

The rumble of the engines largely drowned out the click of camera shutters and the clanking of film gear, as a small phalanx of domestic reporters recorded the first departure for broadcast across the country. The domestic media has permission to film only on the first day of the hunt, and so the press corps dutifully tracked the line of boats as they headed out to sea.

As it was the first day, each boat stopped several times on its way out to pay homage to local deities on land, the fishermen carefully pouring sake over their decks and then washing it clean with seawater to ask for a safe and plentiful hunt. All under the watchful gaze of the domestic media, the dolphin activists, the cultural practices defenders, and the police.

That first day Isana found a mixed pod of bottlenose and Risso’s dolphins close to shore, and drove four in for live capture.

While Taiji was spared the worst of the typhoons during September, several strong storms did hit the area and kept the boats at bay for much of the month. Most of the activists left the town, and the fishermen quietly managed several more Risso’s catches, meat from which soon appeared on the shelves of the local supermarket.

RELATED READS: Read more about Japan’s traditions on whaling and dolphins at our website, Whaling Today and in the reads below.