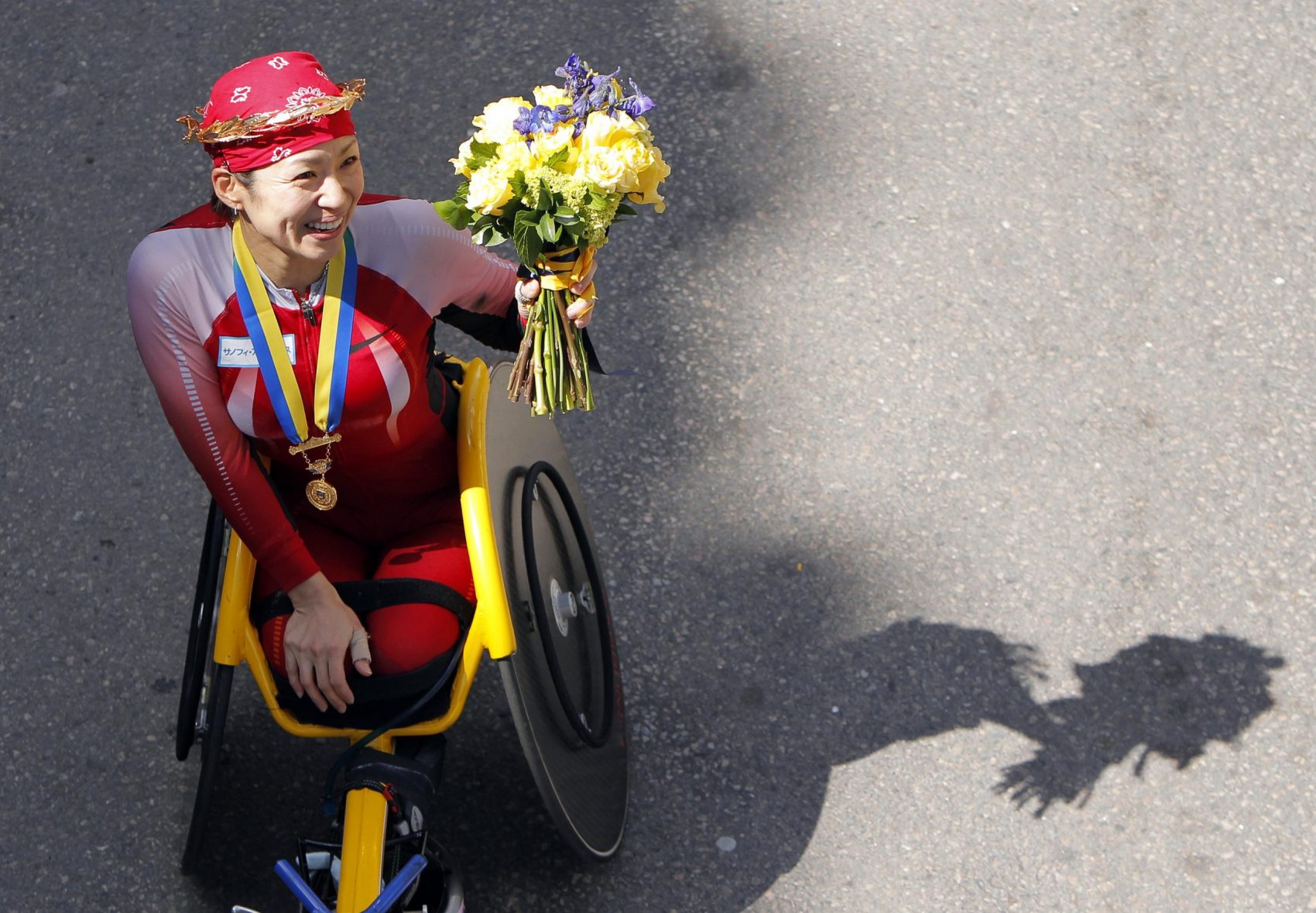 Wakako Tsuchida celebrates after winning the women's wheelchair race at the Boston Marathon for the fourth year in a row on April 19, 2010. (Adam Hunger/REUTERS)

Wakako Tsuchida is one of Japan’s most successful athletes in the 21st century.

Consider the results of every amateur, scholastic and professional sports competition involving Japanese athletes since the calendar flipped to January 2000, and the totality of Tsuchida’s achievements elevates her to the upper echelon of any meaningful list that highlights this nation’s top athletes.

Tsuchida has enjoyed success at the Winter Paralympics, the Summer Paralympics, numerous marathons and other sporting events throughout her sterling career, starting in the mid-1990s.

The Tokyo native is scheduled to compete in the women’s triathlon at the Tokyo Paralympics on the morning of August 29 at Odaiba Marine Park. In a test of speed and endurance, look for her in the PTWC (seated class) division of the triathlon, which consists of 750 meters of swimming, 20 km of cycling and a 5-km run.  For the cycling segment, participants use handcycles. For the running portion, they use wheelchairs. (She’s also scheduled to compete in the women’s marathon on September 5, the closing day of the Tokyo Paralympics.)

She also finished first in the Honolulu Marathon an astonishing 10 times, with victory No. 1 in 2000 and the most recent title in 2016.

Closer to home, she won nine consecutive women’s wheelchair races at the Tokyo Marathon from 2008-16.

After placing fourth in the race at the 2016 Rio de Janeiro Paralympics, she couldn’t complete the New York Marathon a few months later while coping. A heavy cough forced her to withdraw from the race, and Tsuchida was later diagnosed with exercise-induced asthma.

The next year, Tsuchida shifted her focus to the triathlon.

It began an exciting new chapter in Tsuchida’s career.

In May, Tsuchida placed seventh in an International Triathlon Union’s World Paratriathlon Series event in Yokohama.

“I’m driven by the thrill of taking on new challenges and discovering my hidden potential,” Tsuchida was quoted as saying by The Japan News in 2019. “I don’t think I’ve achieved a satisfying result yet.”

Others would beg to differ with Tsuchida’s assessment. For instance, she was the runner-up at the 2018 World Triathlon Grand Final in Australia, and also triumphed in two races that season on the ITU’s World Paratriathlon Series circuit.

When she was a 17-year-old high school student in 1992, Tsuchida was involved in an automobile accident. She sustained spinal cord injuries in the accident, lost both of her legs above the knee and became a paraplegic.

On a sledge, alternatively known as a sled or or sleigh, Paralympians rely on a pair of poles to propel them across the ice, and Tsuchida proved to have a natural talent for the sport.

After getting a feel for the level of international competition at the 1994 Paralympic Winter Games in Lillehammer, Norway, Tsuchida excelled at the Nagano Paralympic Games four years later. In Nagano, Tsuchida won two gold medals in the women’s ice sledge racing (1,000 and 1,500 meters) and two silvers (100 and 400).

Tsuchida’s medal haul in Nagano was a harbinger of things to come. At the same time, she adjusted to the changing nature of the Paralympics.

So instead of thriving on ice, Tsuchida began to shine on dry land.

She collected the women’s wheelchair marathon bronze medal at the 2000 Sydney Paralympics, completing the race in 1 hour, 50 minutes, 10 seconds. She was the runner-up in the same race (1:50:13) at the 2004 Athens Paralympics, where she also took home the gold from the women’s 5,000-meter wheelchair race. By doing so, Tsuchida became the first Japanese to win gold medals in the Winter and Summer Paralympics.

Looking back on her life-changing accident, Tsuchida said her mother’s guidance was instrumental in helping her deal with the loss of her legs while not letting it stop her from doing normal daily activities.

“My mother encouraged me to live alone immediately after I left the hospital and gave me the opportunity to be self-reliant,” Tsuchida said in an interview with Paralympic.org in February 2020. “I was self-conscious about people looking at me in my wheelchair. However, since I was able to do most of the things on my own such as driving a car just like when I was able-bodied, I was gradually able to accept my disability.”

In an interview with the British Chamber of Commerce in Japan magazine in 2012, Tsuchida explained why competing in sports brought her joy.

“I had loved sport before, although I was not all that competitive until after the accident,” said Tsuchida, who has worked in human resources for many years. “I had to stay in [the] hospital for nine months, but it was a very good hospital for people in wheelchairs and I saw many individuals there who were very happy and energetic, which encouraged me.”

In the Spotlight This Summer

In an athletic career filled with many amazing moments in competitions, Tsuchida experienced a different atmosphere when the spotlight was on her for a brief moment on July 23. During the Opening Ceremony at the Tokyo Olympics, Tsuchida was one of the final torch bearers at the New National Stadium, and she presented the Olympic torch to a group of Tohoku Region students, who then handed it to tennis star Naomi Osaka, who lit the cauldron.

In choosing Tsuchida for this honor, Tokyo 2020 organizers paid homage to her illustrious career as a trailblazing figure among Japanese Paralympians.

And it wasn’t the first time she’s been recognized for her sustained excellence throughout her career in a wide range of competitions. In January 2011, she received the Prime Minister’s Award.

While awards are special, as Tsuchida has acknowledged, the big stage that the Paralympics occupy every other year are more important to her.

“The Paralympic Games are the most valuable event in the world where athletes demonstrate their limitless possibilities,” Tsuchida said in a lengthy profile posted on Olympics.com in April. “It is an opportunity where people with impairments can make a challenge, and the experience of participating will help you grow as a person.”

Tsuchida is a prime example.

She’s also an ideal role model, one who eloquently speaks about the huge impact sports can have on society as a whole.

“It’s my wish that understanding towards the Paralympics will deepen and that our society will be a place where every person, whether disabled or not, can coexist; and that it will not end as a temporary trend because of Tokyo 2020,” Tsuchida told Paralympic.org.

Call it one of the best wishes ever.