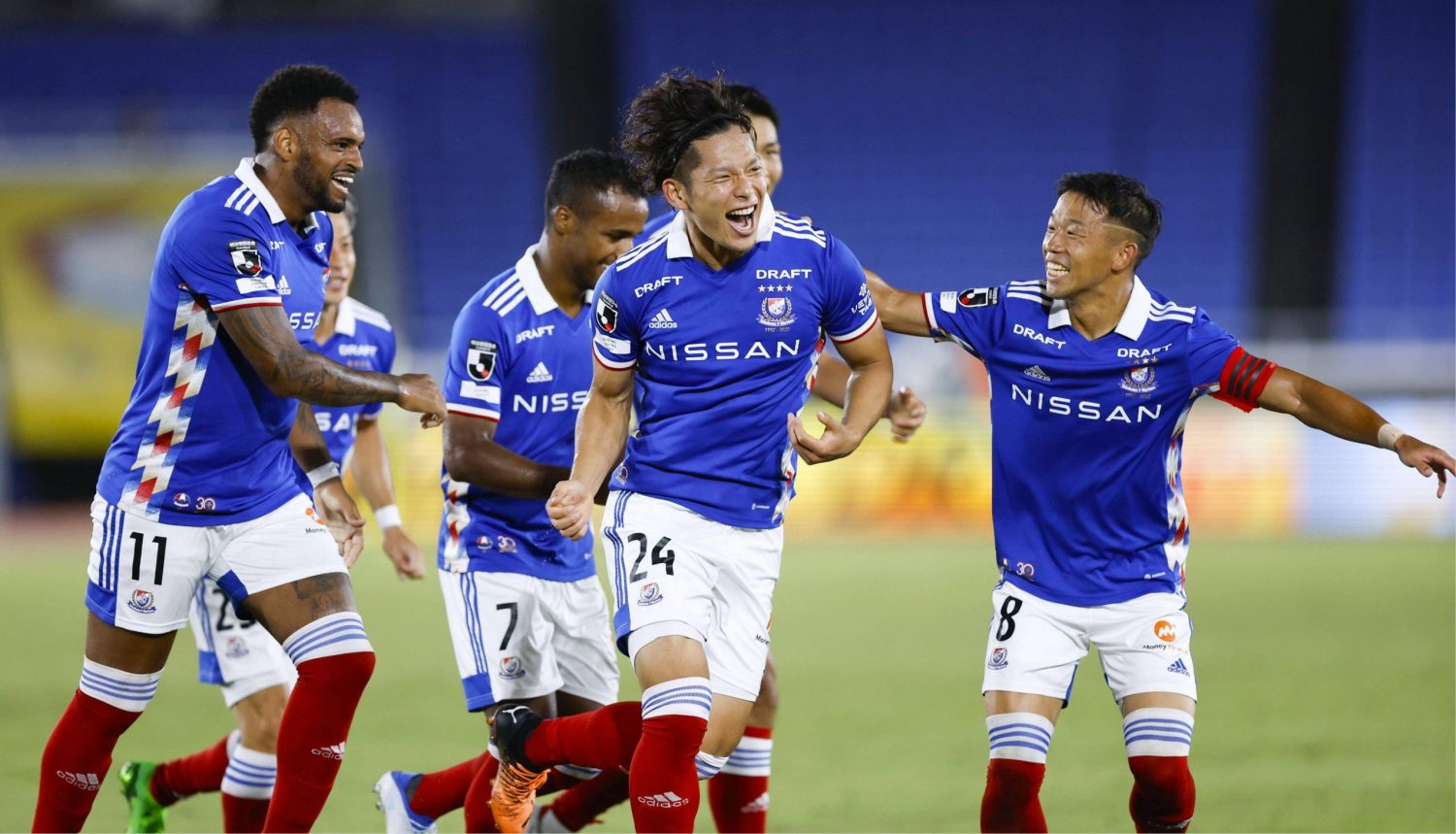 Yokohama F. Marinos players congratulate Tomoki Iwata (24) for scoring a goal in the second half against the Kashima Antlers on July 30 at Nissan Stadium. (KYODO)

There were high expectations for Kevin Muscat when he officially took over as Yokohama F. Marinos manager on July 18, 2021.

A little over a year later, there’s ample evidence that Muscat was the smart choice to fill the void left by Ange Postecoglou’s departure.

While Postecoglou enjoyed a storybook debut with Celtic FC in the Scottish Premiership to wrap up the 2021-22 campaign with the winner’s trophy, Muscat steered Marinos to a respectable second-place finish in the J.League, 13 points behind Kawasaki Frontale.

This season, which got underway in February, has demonstrated Muscat’s knack for maximizing his players’ collective talents and challenging them to focus on securing the J.League’s ultimate prize.

Marinos have a league-best 50 goals and a plus-25 goal differential. Through 23 matches, they have 14 wins, six draws and three defeats. With 48 points, Yokohama owns an eight-point cushion over the second-place Kashima Antlers, followed by Kashiwa Reysol (39 points), Cerezo Osaka (38) and Frontale (37).

Postecoglou led Marinos to the franchise’s fourth J1 title in 2019 (and first since 2004), and the team’s fans have kept their hopes up for another euphoric celebration ever since.

In 2020, Yokohama slipped to ninth place before climbing back to near-the-top status a year ago.


When he was named Marinos manager in July 2021, Muscat clearly outlined his vision for the club.

“I look forward to continuing and building on the foundations Ange has laid to finish the season strong and achieve our goal,” said Muscat, who succeeded Postecoglou as boss of the A-League’s Melbourne Victory in 2013 and led them to two league titles during his managerial reign that lasted until 2019.

“I cannot wait to meet the players and staff, and get to work to achieve special things together.”


A Good Measuring Stick for Marinos

It was Yokohama’s ninth shutout of the J.League campaign, a reminder of goalkeeper Yohei Takaoka’s strong showing in 2022. Marinos also extended their unbeaten streak to nine league matches with the authoritative home victory.

Goals from Brazilian Elber and Tomoki Iwata, one in each half, produced the winning margin at Nissan Stadium.

In summarizing his team’s focus entering the second half, Muscat, who turns 49 on August 7, kept his instructions simple: “Move quickly as soon as you get the ball,” he told his players. “Let’s play calmly in the second half without panicking.”

After the match, Iwata admitted he and his teammates were fired up to face the Antlers.

“We had a little extra motivation today, and that contributed to this result,” Iwata was quoted as saying by Kyodo News. “It was a battle for the league leadership, and I was really looking forward to it.”

There’s no cryptic formula needed to decipher why Marinos remain in a perfect position to claim their fifth J.League title before the season’s end in early November.

It all starts with scoring depth.

Brazilian Leo Ceara is tied for the league lead in goals (10), sharing the top spot with Kashima’s Ayase Ueda.

Muscat spoke about the team’s concurrent objectives in a recent interview with Australian website ftbl.com.au (commonly known as FTBL).

“We’ve built a certain amount of resilience into this squad in a fairly short time, which is pleasing because a lot of new players have come to the club,” Muscat told the website. “We’re in a good position ― we’ve built ourselves a base and now we’re striving for that consistency you need [to be challenging for titles].

“A lot of it is about mental stamina as well as the physical side of the game. We’re not taking anything for granted ― we know where we’re at with the squad and how it’s been put together.”

In analyzing Marinos’ performance this season, Muscat said in June that he’s pleased with the influx of new players, their overall productivity and the team’s on-the-field play.

“We replaced quite a few players with younger models, if you like. And they’ve come in and done really well,” Muscat said, according to FTBL.

“There’s definitely been an upside to that, and we’ve pushed as hard as we can to achieve that upside as soon as possible. We’re definitely in a good way at the moment.”

For Yokohama F. Marinos, many moments, er, matches remain on the J.League’s 2022 calendar.

And all signs are pointing in the right direction.