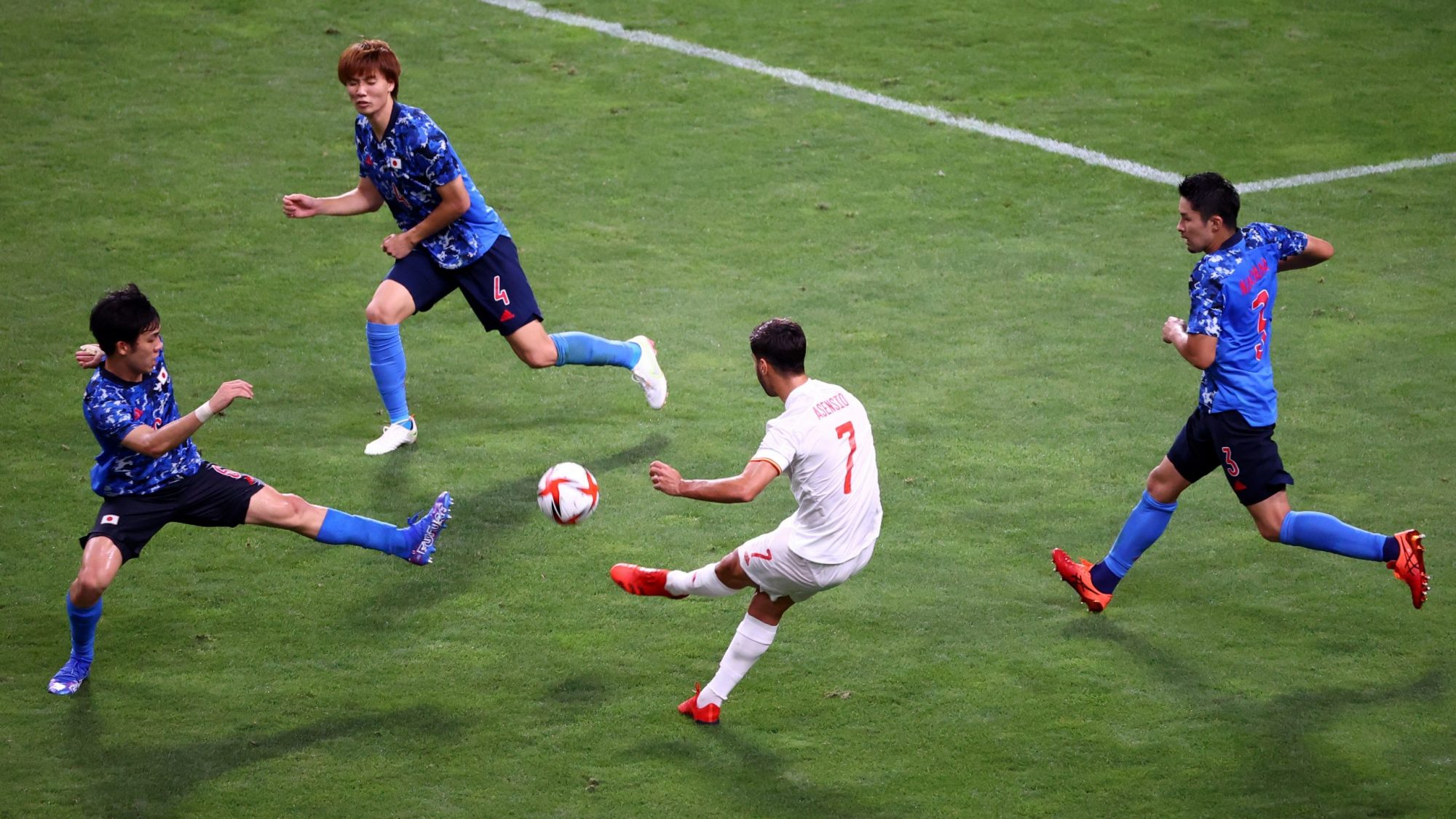 Japan was knocked into the bronze-medal match after losing to Spain in the semifinal game at Saitama Stadium, 1-0.

Spain’s Marco Asensio, a Real Madrid striker who entered the game as a substitute, scored the winning goal in the 115th minute, 5 minutes before the end of extra time. Mikel Oyarzabal got the assist.

Japan had a few opportunities, including a corner kick, to counter Spain’s goal in the last minutes of the game, but wasn’t able to tie it. Throughout the game, the hosts were more often on defense and only had possession of the ball 39% of the time.

Scoreless after 90 minutes, the game was extended by an additional 30 minutes.

"Unfortunately, we were not able to win, but we will be ready for the next round,” Japan manager Hajime Moriyasu said after the match, according to Kyodo News. “We talked about showing resilience in order to win a medal.”

Earlier in the day, Mexico and Brazil met in the other semifinal match. It was 0-0 after 90 minutes, and after neither time scored in extra time, a penalty shootout decided the outcome. Brazil outscored Mexico 4-1 in the shootout.

Japan will play against Mexico in the bronze-medal match on Friday, August 6.

Shohei Yabiku recorded a 13-3 victory over Iran’s Mohammadali Geraei in the first of two bronze-medal matches in the men’s 77-kg Greco-Roman wrestling division at Makuhari Messe in Chiba.

For the 28-year-old Okinawa native, the decisive win provided satisfaction.

"Since I became No. 1 in Japan, I've won medals in Asia, but haven't been able to win medals on the international stage," Yabiku was quoted as saying by Kyodo News. "That's why this has value for me."

Five years ago, Oborududu finished 14th overall in the 63-kg weight class at the Rio Games.

China’s Siyi Xie and Zongyuan Wang took the top spots in both the semifinal and final rounds of the men’s 3-meter springboard event, finishing with 558.75 and 543.80 points, respectively. The pair previously won the synchronized 3-meter event together.

Ken Terauchi, who made his sixth Olympics appearance, made it into the finals but wasn’t able to get on the podium. The veteran diver wasn’t able to get into proper form in time during his third dive and scored 29.70 points, which took him down to last place (359.70) in the 12-man final.

After finishing his last dive, the 40-year-old Terauchi’s long career was recognized with a standing ovation from divers, coaches and others in the audience.

Germany’s Malaika Mihambo claimed the gold in the women’s long jump final with a winning leap of 7.00 meters.

Mihambo finished fourth in the event at the 2016 Summer Games in Brazil.

The final four teams of the Olympic men’s basketball tournament are now set, with Slovenia, the United States, France and Australia advancing to the semifinals at Saitama Super Arena.

Team USA will face Australia in the first semifinal at 1:15 p.m. on Thursday, August 5, followed by a France-Slovenia clash at 8 p.m.

For Italy, Simone Fontecchio had a team-high 23 points and Danilo Gallinari scored 21.

In the late game, Australia hammered Argentina 97-59 to book the final spot in the quarterfinals.

Patty Mills had 18 points for Australia, which drained 17 3-pointers and held Argentina to eight.

Nicolas Laprovittola had 16 points for Argentina.

Yoandy Leal Hidalgo led reigning Olympic champion Brazil with 16 points, including 15-for-22 on attack. Wallace De Souza chipped in with 13 points and Ricardo Lucarelli Souza had 12.

For Japan, Yuki Ishikawa notched a match-high 17 points and Yuji Nishida finished with 13.

“We got this far with good performances so the result is disappointing," Ishikawa said after the match, according to Kyodo News. "We are still left wanting when it comes down to execution on each play."

Brazil advances to face the Russian Olympic Committee team in the semifinals.

The first two games took a combined 15 minutes, and the Japanese duo wrapped up the win with a 10-minute effort in the final game.

Ishikawa and Hirano will face the winner of the China-Germany semifinal (on Wednesday, August 4) in the title match on Thursday, August 5 at 7:30 p.m. China is the No. 1 seed. Germany is the third seed.