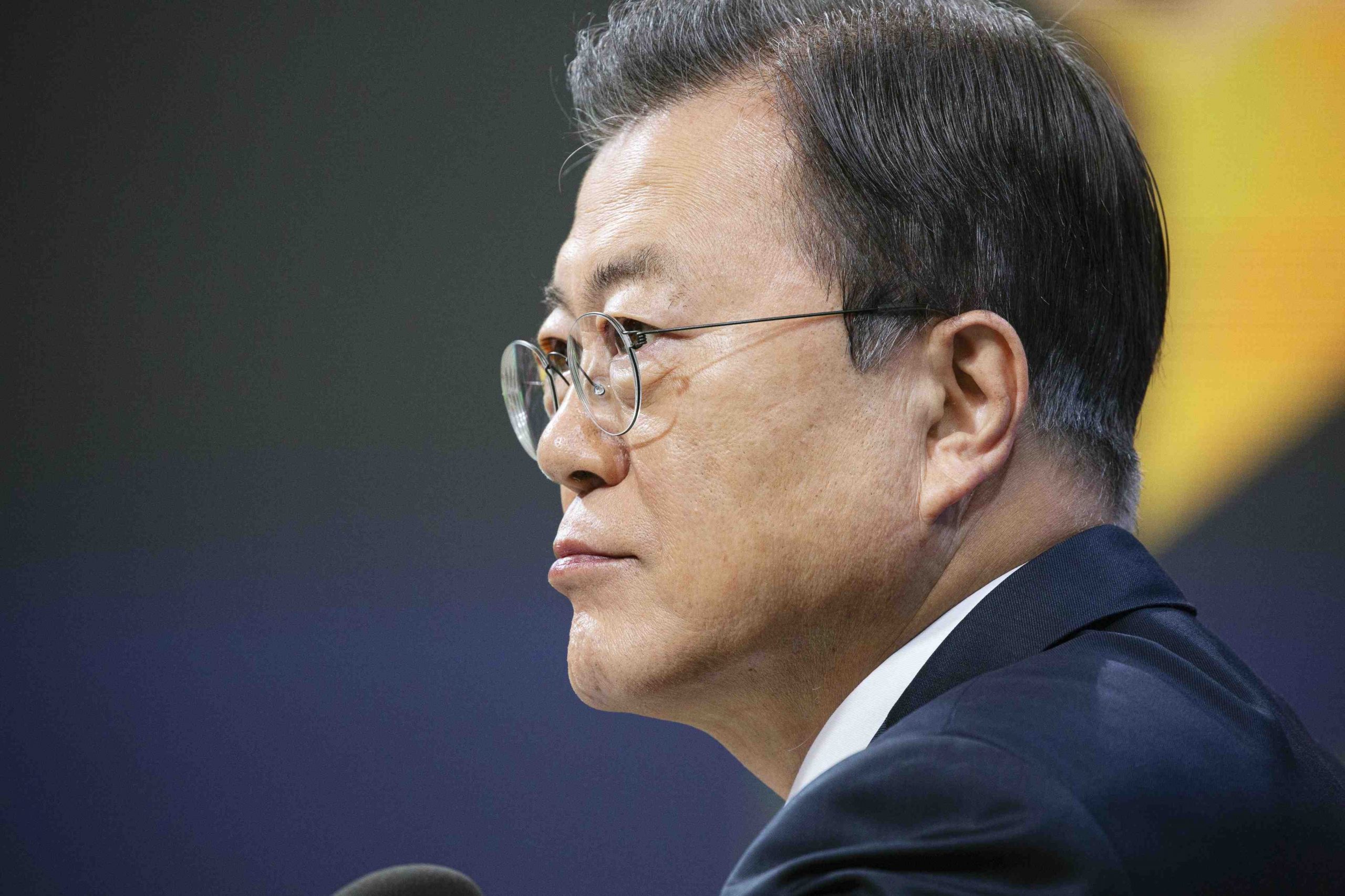 The Supreme Court of South Korea, in a decision in October 2018, triggered the lowest point in post-war Japan-South Korea relations. It ordered Japanese firms to pay compensation to recruited Korean workers in a wartime labor lawsuit.

However, the Seoul Central District Court reversed this decision, and the lawsuit was dismissed in June 2021.

In proceedings related to the comfort women issue, the Seoul District Court ordered the Japanese government in January 2021 to compensate women claiming to be former comfort women, rejecting international law principles on sovereign immunity and the force of treaties to do so. However, in April this year, the Seoul Central District Court issued a contradictory ruling, denying the claims of another plaintiff group on those grounds.

Do the reversals in these cases reflect a change of position by the South Korean government on the issues?

South Korea’s President Moon Jae In has so far sent no signal suggesting there is any change in his government’s position on either the wartime labor or the comfort women issue.

On June 7, the 34th Civil Division of the Seoul Central District Court (Judge Kim Yang-ho) ordered the dismissal of a lawsuit filed by 85 South Koreans and their bereaved relatives against 16 Japanese companies they claimed had recruited them as wartime labor workers.

The ruling not only contradicted the South Korean Supreme Court’s October 2018 decision, it also stated that, if South Korea were to seize and sell off Japanese companies’ assets, “the country would lose its dignity as a civilized nation” and that “it could damage South Korea-U.S. relations and trigger an uncontrollable diplomatic ripple.”

The June 7 ruling was initially scheduled to be announced on June 10, but was hurriedly brought forward because June 11 was the kick-off of the Carbis Bay G7 summit in the United Kingdom to which Moon had been invited as an observer.

It is thought that the announcement of the ruling was expedited to improve the atmosphere for a possible meeting between Moon and Japanese Prime Minister Yoshihide Suga on the side of the summit.

Meanwhile, on April 21, the 15th Civil Division of the Seoul Central District Court (Judge Min Seong-cheol) dismissed a claim for damages in which 20 former comfort women demanded compensation from the Japanese government, saying, “The Japanese government cannot have a lawsuit brought against it.”

The court’s reasoning was based on the principle of “sovereign immunity” ー that any sovereign government is immune from being sued in a foreign country. The court added, “Creating exceptions to sovereign immunity could adversely affect South Korea’s foreign policy and national interests.”

The decision contradicted a January 8 ruling of the 34th Civil Division of the Seoul Central District Court (Judge Kim Jeong-gon), in a case brought by 12 different former comfort women against the Japanese government.

In the January 8 decision, the South Korean court blatantly rejected the international law principle of state sovereign immunity and said the 12 plaintiffs had a right to bring a claim for compensation against Japan.

About 10 days after the earlier ruling in January 2021, President Moon revealed during a news conference that he found the decision somewhat perplexing.

Shortly after that, there was a major personnel upheaval within the 34th Civil Division of the Seoul Central District Court, following which the court changed its stance on the comfort women case, saying an attempt to force the Japanese government to cover litigation costs contravenes international law.

It seems that underneath all this, the judiciary was operating with an element of political consideration.


Three Strikes and You’re Out

The 2018 and January 2021 South Korean court rulings on wartime labor and comfort women issues are major factors behind the steep decline in Japan-South Korea relations. But the Japanese side sees only a cascade of treaties and agreements with South Korea that have been violated by the South Korean courts.

When asked about the cases, a source close to the Japanese government laughed bitterly, and used a baseball analogy to explain.

Strike one, in his view, was the South Korean court’s decision to ignore international law guaranteeing Japan sovereign immunity, and instead treat the comfort women issue as a crime against humanity on par with Nazi Germany’s genocide. The court then built on its own faulty reasoning to justify ignoring previous agreements, such as the comfort women agreement of 2015 between South Korea and Japan, and funds established for and paid to the women in the past.

Strike two was the 2018 wartime labor ruling, which violated the 1965 Treaty on Basic Relations and accompanying 1965 Japan-South Korea agreement on the settlement of problems concerning property and claims, in which both parties settled all claims “completely and finally.”

Strike three was the court’s breach of the Vienna Convention, which protects a country’s overseas assets and holds any attempt to enforce a judgement against them as a violation, in this case, the assets of Japanese firms in South Korea.

From the point of view of Japan-South Korea relations, which ruling is more serious, the wartime labor ruling or the comfort women one? A source close to the Japanese government believes the wartime labor decision is more dangerous.

In the case of the comfort women ruling, it is unlikely that Japanese assets in South Korea would be seized and sold off.

However, in the wartime labor case, the sale of assets belonging to Japanese firms under the 2018 ruling is in the final stages. According to one source, “The South Korean government has applied the brakes [for the time being].” This is because South Korea knows that Japan would immediately impose sanctions if the assets were to be cashed.


Lack of Optimism in Japan

How has the Japanese government reacted to the recent court reversals?

“It’s actually made things more difficult to figure out,” reveals one diplomatic official. “In reality, nothing has changed and there are no signs that the South Korean government is trying to improve Japan-South Korea relations.”

The 2018 wartime labor ruling contravenes international law, and Japan wants a message from the South Korean government to show this situation will be turned around.

At the same time, some in Japan optimistically note that “the South Korean judiciary is once again acknowledging international law.” But that gets no diplomatic points because it should be the starting expectation.

Since the Seoul Central District Court decision in June, Japan has stressed that the ball is in the South Korean government’s court. But South Korea simply says it wants Japan to “first show good faith.” So, instead of diplomatic dialogue, the two countries are talking past each other.

As long as the 2018 Supreme Court decision is out there, the matter is up to the South Korean government, which has the power to make the political decisions that would lead to an improvement in its relationship with Japan. For example, the Seoul government could move legislation through the South Korean Assembly prohibiting compensation demands against Japan over the wartime labor issue.

On June 21, shortly after the Seoul Central District Court dismissed the second wartime labor lawsuit (unrelated to the 2018 decision), a diplomatic meeting involving Japanese and South Korean officials took place in Seoul, but no progress was made. The South Korean officials simply maintained their old stance.


An Even Edgier Situation

In political circles in South Korea, it is said that the Moon administration does not want to leave a legacy of failing in terms of foreign policy with Japan. So, in that sense, the mood at the Blue House (presidential office) has changed.

However, this does not necessarily mean the situation is improving. South Korean plaintiffs who lost in both the wartime labor case in June and the comfort women case in April have appealed. That means the legal proceedings will not be concluded until after the Moon era.

Moreover, some believe the Moon administration will want to leave a legacy of maintaining a hard line on Japan, and for that reason Moon will probably avoid resolution of any major political issues during his time in office.

But the Japanese government, which views the trial as a breach of international law, is ignoring such demands.

It seems that, if anything, the tension between Japan and South Korea has become even edgier than before.

(Find access to this Sankei Shimbun column in Japanese at this link.)