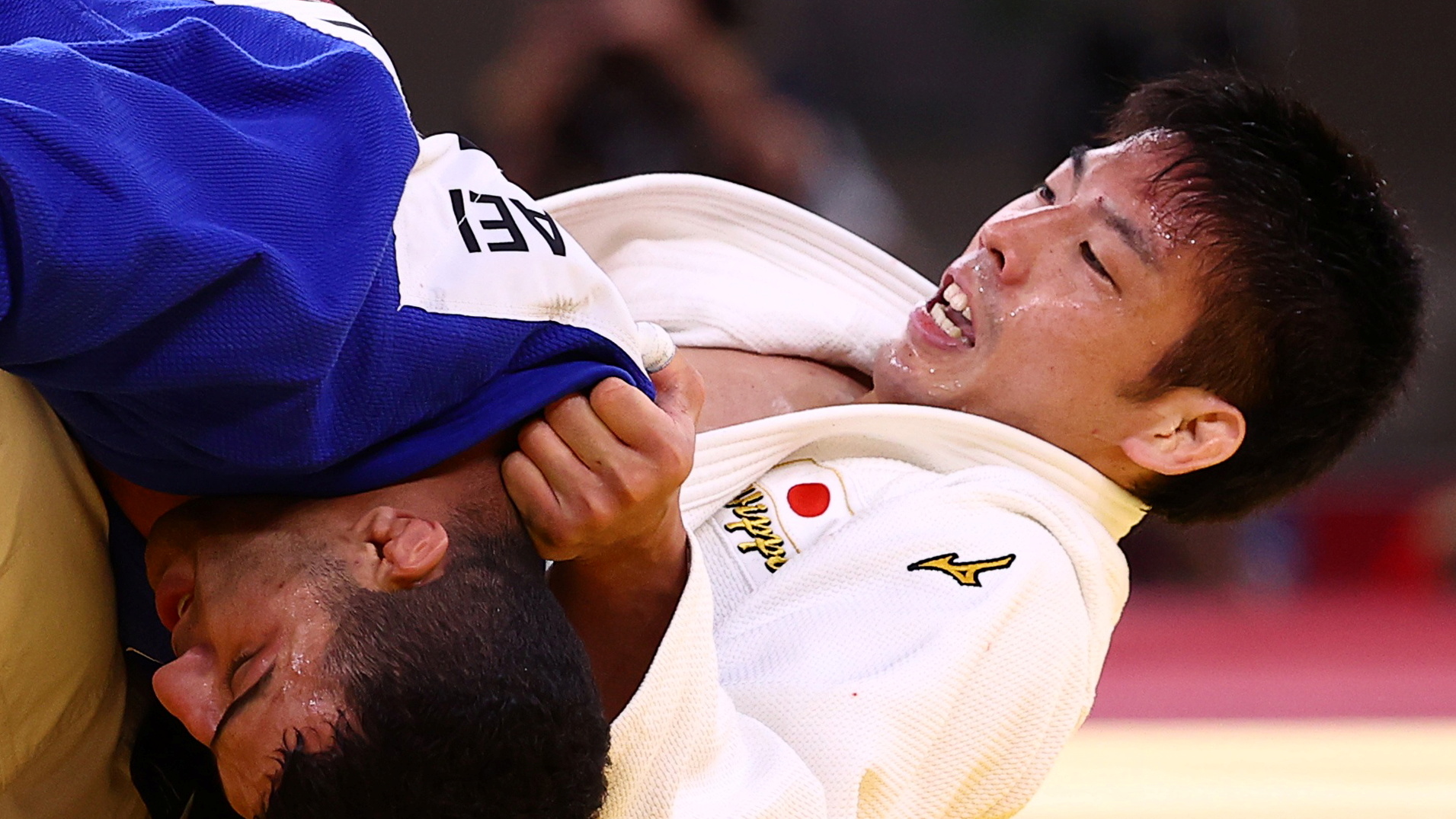 JAPAN Forward will be monitoring the key happenings in a handful of Olympic sports during the day and bring reports to our readers through this Olympic Digest.

We will keep updating this article throughout the afternoon and evening, so make sure to bookmark JAPAN Forward’s page for the latest Olympic-related news from Japan!

Nagase, an Olympic bronze medalist in Rio five years ago, beat Mollaei by waza-ari in the final at Nippon Budokan to give Japan its fifth gold medal in judo. Japan has won all four of the men’s weight classes contested so far.

“I had bitter memories from Rio and it was a difficult five years but I’m happy all the hard work finally paid off,” Nagase said.

Nagase became the first Japanese to win this event since Makoto Takimoto did so at the 2000 Sydney Games.

Okazawa edged Iglesias in the first round at Ryogoku Kokugikan, but the Cuban boxer came back to outscore Okazawa over the final two rounds.

Three out of the five judges scored it in favor of Iglesias, who won the gold as light welterweight at the 2012 London Games and took home the bronze in that weight class from the 2008 Beijing Olympics.

Born in Yamagata Prefecture to a Japanese mother and Ghanian father, Okazawa has a record of 16 wins and three losses and was one of Japan’s top medal hopes in boxing.

Okazawa began his boxing career at the age of 16 in 2011, and claimed his first Japanese national title in 2018.

“I worked hard from the start of the match as a challenger, so I think I was able to play very well,” Ishikawa, a member of the Japan women’s team that claimed the bronze medal at the 2016 Rio Games, was quoted as saying by Yahoo News.

Slovenia’s Darko Jordic ousted Tomokazu Harimoto in the men’s singles fourth round. Because he was seeded fourth, Harimoto began his participation in the Olympics in the third round.

“I lost for the first time as part of the Japanese team, so I want to make up for it in the team event,” he reflected after the match.

Harimoto will compete in the men’s team event on August 1 against Australia.

Nadeshiko Japan Races Past Chile and Earns Place in Quarterfinals

The Japan women’s soccer team secured a spot in the quarterfinals by beating Chile 1-0 in the last match of the group stage at Miyagi Stadium.

The match took place under a light rain in one of the few locations to admit spectators at the Tokyo Olympics, and the onlookers greeted the play of Nadeshiko Japan with affable encouragement.

There was plenty to cheer on in the first half, as the Japanese attacked consistently and stacked up six attempted goals in the opening 20 minutes. However, Chile maintained a strong defense, thanks to the ability of goalkeeper Christiane Endler.

Japan also had a close call in the 69th minute, when Chile’s Lara Franscisca’s shot deflected off the top post and bounced narrowly inside the goal. However, the ball was caught by Japan goalkeeper Ayaka Yamashita before it could go completely inside the goal, keeping the score at 0-0.

Japanese spectators finally breathed a sigh of relief thanks to Mina Tanaka. The Thailand native found a hole in Chile’s defense and scored in the goal area in the 77th minute.

For Japan, another scoring chance was taken by the youngest team member, 18-year-old Momoka Kinoshita. She attempted a left-footed shot from the middle of the field in the 87th, but it was saved with ease by Endler.

Nadeshiko Japan was hoping to prevail against Chile. In previous matches, the team recorded one win and one loss, against Canada and Great Britain, respectively. Japan’s women’s football team also comes from a strong past, winning the 2011 FIFA Women’s World Cup and nabbing silver at the 2012 London Games.

Barring changes, Japan is set to play against a tough opponent, Sweden, on July 30 at 7 p.m.

By more than a one-minute margin Bermuda’s Flory Duffy swept away the competition at the women’s triathlon final at Odaiba Marine Park, snatching Bermuda’s first-ever gold medal on Tuesday, July 27. This is also Bermuda’s second-ever Olympic medal. Boxer Clarence Hill claimed the bronze in the men’s heavyweight division at the 1976 Montreal Games.

After a close competition during the initial 1.5-km swim, Duffy, together with four other athletes, broke away from the competition and took the lead during the 40km cycle section.

But it was in the last 10-km run that Duffy really shone, leading from the very start, and ending with a whopping time of 1:55.36, a full minute and 14 seconds faster than the U.K.’s Georgia Taylor-Brown, who finished second. The third place was snatched by U.S. competitor Katie Zaferes.

This is the first Olympic medal for double triathlon world champion Duffy, who is 33. Yet the path to this gold medal was not a smooth one. She has competed in every edition of the Games since her debut in the Beijing Olympics in 2008, but until today the highest ranking she has achieved was eighth place, in the 2016 Rio de Janeiro Olympics.

Duffy also suffered a series of setback injuries, including a fractured hand and inflamed knee in 2020, and had to miss 12 months of competition between 2018 and 2019 due to a foot injury. She returned to competition just in time to qualify for the Tokyo Games.

“It feels incredible. Of course it makes all the injuries, hard times and the tears completely worth it,” said Duffy, reflecting on her victory. “I am so thrilled I achieved my dream of winning a gold medal, but also winning Bermuda’s first gold medal. It’s bigger than me and it’s a really cool moment.”

Noteworthy among her competitors was Britain’s Taylor-Brown, 27, who lost time in the cycling section due to a punctured tire. “I just tried to see what happened as I had already lost time, but only 15 seconds so it wasn’t all too bad,” pondered the British athlete afterward.

Ishijima, Shiratori Fall to 0-2 in Men’s Preliminary Round

The Italian duo had a 26-13 edge in attack points and recorded a 5-1 advantage in block points, improving to 2-0 in the tourney.

Ishijima and Shiratori dropped to 0-2.

“It’s definitely something that people dream of,” McKeown told Australia’s Channel 7 TV after the race. “Something I have dreamed of to make it reality. I’m just thankful I have a good support team.”

The Australian, who turned 20 on July 12, entered the Tokyo Olympics with a world record of 57.45 seconds in the event, set on June 13 in Adelaide at the Australian Olympic trials.

McKeown returns to the pool in a 200 backstroke qualifying heat on Thursday, July 29.

American Lydia Jacoby won the women’s 100 breaststroke, and Russians Evgeny Rylov and Kliment Kolesnikov were 1-2 in the men’s 100 backstroke.

Jacoby, 17, earned the upset victory in a time of 1:04.95. She became the first Alaskan swimmer to capture an Olympic gold medal. South Africa’s Tatjana Schoenmaker and gold-medal favorite Lilly King of the United States followed in 1:05.22 and 1:05.54.

“I was definitely racing for a medal. I knew I had it in me,” Jacoby said after the race, according to The Associated Press. “I wasn’t really expecting a gold medal, so when I looked up and saw the scoreboard it was insane.”

Japan Slips Out of Medal Contention with Another Loss

A 36-12 defeat to Pool B foe Canada eliminated Japan from medal contention in the men’s rugby sevens tournament.

The morning defeat, the host nation’s third in a row to open the tournament, came at Tokyo Stadium.

China’s women have won every diving competition since 2004, and today was no different.

Chen and Zhang opened the competition with several 10s in their second reverse dive, and finished the competition with 363.78 points, more than 50 points ahead of American silver medalists Jessica Parratto and Delaney Schnell, who scored 310.80. Visibly overjoyed Mexican Gabriela Garcia Agundez and Alejandra Loza Orozco gained the bronze medal, scoring 299.70.

There were hopes for Japan’s Matsuri Amai and Minami Itahashi going into the competition. The pair performed particularly well on their fourth dive, featuring a forward three-and-a-half somersaults, scoring 71.10 points, jumping them to third place.

However, in the final round the duo from Japan dipped to a lower score of 61.44, the lowest of the second half of the competition, leading Amai and Itahashi to finish sixth overall.

Japan Men, Women Each Record a Victory on Final Day of Pool Play

Mai Yamamoto scored a team-high eight points and Stephanie Mawuli chipped in with six to lead Japan to a 20-18 victory over the United States in pool play at Aomi Urban Sports Park.

In the men’s game, Japan topped China 21-16, with Ryuto Yasuoka and Keisei Tominaga each puting eight points apiece on the board for the hosts. Go Shiyan paced China with eight.

The men’s and women’s quarterfinals were to begin in the evening on the same day.

Tijana Boskovic delivered a dominating performance to carry Serbia past Japan in a women’s Pool A match at Ariake Arena, scoring a match-best 34 points in a 25-23, 25-16, 26-24 triumph.

The 24-year-old Serb made her Olympic debut in Rio five years ago.

World No. 5 Japan faced a good measuring stick against 10th-ranked Serbia, but couldn’t match Boskovic’s power and consistency at the net. Boskovic’s attack was the key aspect of the match. She converted 31 of 49 attacks into points.

Mayu Ishikawa led Japan with 13 points and Ai Kurogo had 12.