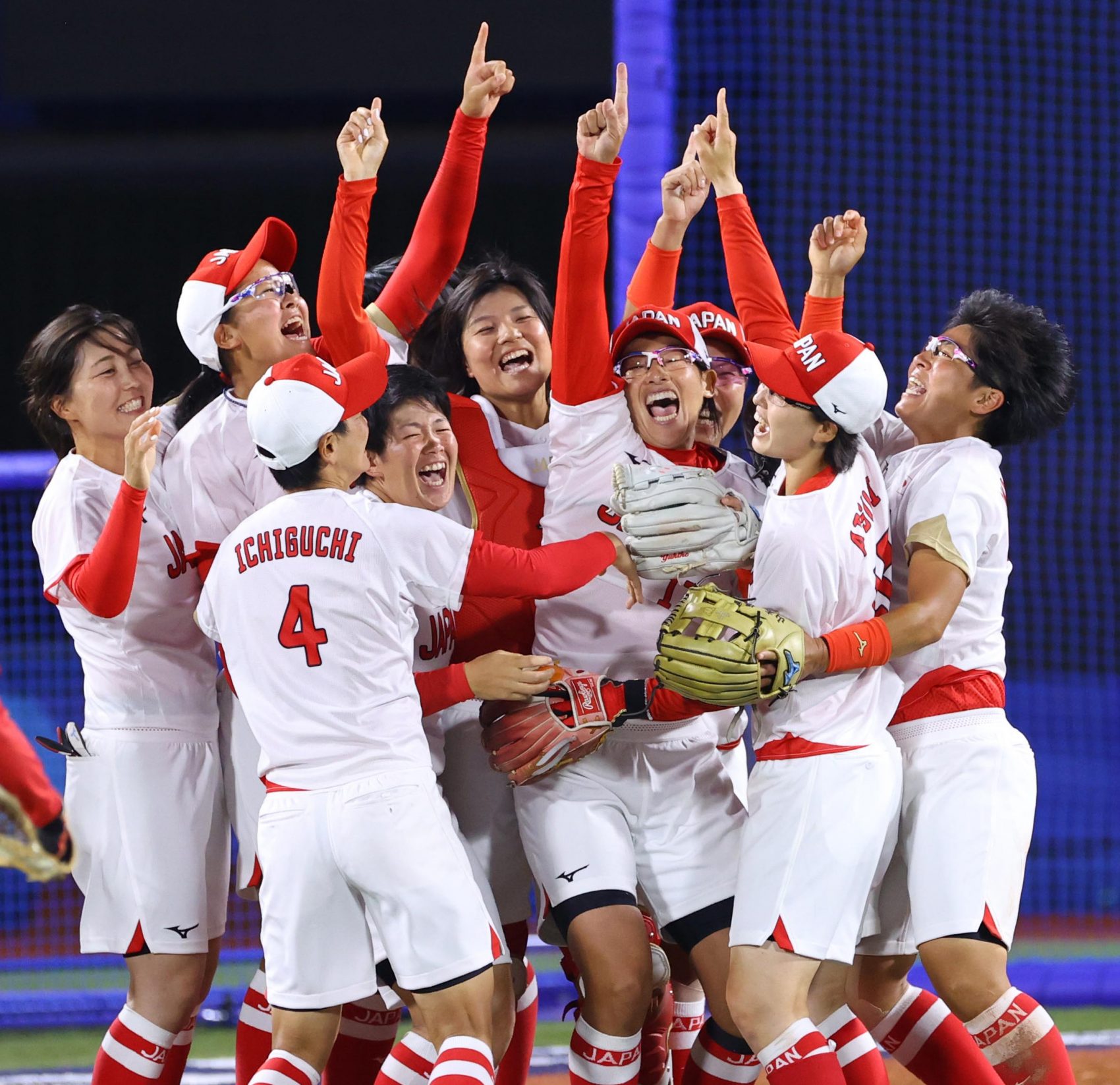 The Japan women's softball team celebrates its victory over the United States in the gold-medal game at Yokohama Stadium on July 27.

Ueno, who was on the mound when Japan beat the U.S. in the gold-medal game in Beijing in 2008, turned in another spectacular performance on Tuesday, July 27, in what was likely her last Olympics.

After holding the U.S. scoreless over five innings, Ueno was replaced by relief pitcher Miu Goto, but came back to retire the side in order in the seventh at Yokohama Stadium.

“There was a lot of pressure on us as it was here in Japan,” Ueno said. “It felt great to win. As long as you keep trying and believing in yourself you can achieve your dreams. I’m so happy I was able to live up to expectations."

Japan got on the scoreboard in the fourth inning when Yamato Fujita scored from third on Mana Atsumi’s two-out single to second base.

Yu Yamamoto singled to center and advanced to second on a wild pitch. With two out, Fujita then singled to right field, scoring Yamamoto.

After that, Ueno and Goto did their part to keep the U.S. off the scoreboard. The American batters stranded nine runners over seven innings.

Fujita came close to giving Japan a 3-0 lead in the seventh, but U.S. left fielder Janie Reed made a spectacular leaping catch, reaching over the fence to pull Fujita’s fly ball back.

Ueno also picked up the win in Japan’s opening 8-1 victory over Australia and barely missed out on getting the win on her 39th birthday on Thursday, July 22, in a 3-2 win over Mexico.

Two Games in Two Days Against the U.S.

The U.S. beat Japan 2-1 on Monday, July 26 in the final game of round-robin play, a game that, even though it lost, may have motivated Japan.

“It was a difficult week,” Japan manager Reika Utsugi said. “We weren’t sure how people felt with all that has gone on, but after yesterday’s game we got a lot of messages of support and realized the country was fully behind us.”

Softball will not be on the program for the next Summer Olympics in Paris in 2024.

Before Japan won in 2008, the U.S. had captured three consecutive gold medals since the sport became part of the Olympic program at the 1996 Atlanta Games.

Earlier, Kelsey Harshman drove in the winning run in the bottom of the fifth to lead Canada to a 3-2 win over Mexico in the bronze-medal game. It is Canada’s first-ever Olympic medal in the sport.