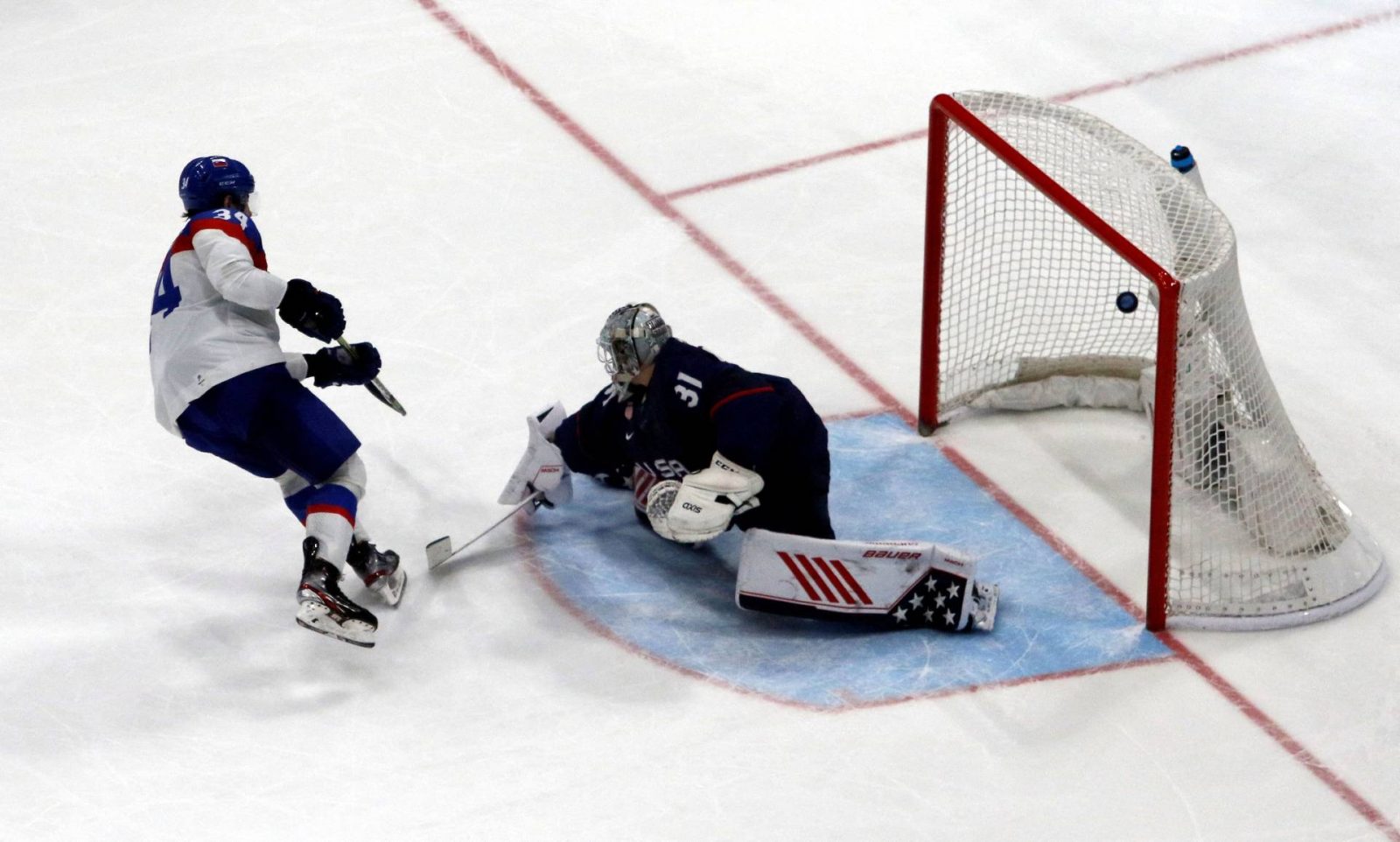 In a major upset in the men’s hockey tournament, the United States was eliminated by Slovakia in the quarterfinals after the Americans had gone undefeated in the preliminary round to enter the knockout stage as the top seed.

Slovakia tied the game late in regulation, survived a 10-minute 3-on-3 overtime, then won it in a shootout on Wednesday, February 16 to advance to the semifinals.

Peter Cehlarik scored on the fourth attempt in the shootout and goaltender Patrik Rybar stopped all five shots he faced as Slovakia won 3-2 in the quarterfinal showdown at National Indoor Stadium.

Cehlarik finally beat US goalie Strauss Mann after the previous three shooters were all denied by the goalie who currently plays in the Swedish professional hockey league.

The US squad, made up mostly of NCAA college players, looked set to win it in regulation after taking a 2-1 lead.

Nick Abruzzese scored with 46 seconds left in the first period after Juraj Slafkovsky had opened the scoring at 11:45 of the first.

Sam Hentges made it 2-1 for the Americans early in the second period and the score remained that way until Marek Hrivik pounced on a loose puck and knocked it over the goal line with just 44 seconds left in regulation.

“It was a great game,” Hrivik said. “Probably one of the best I’ve ever played in my career. … [Rybar] was outstanding. He was by far the best player out on the ice today.”

After beating Canada 4-2 earlier in the tournament and going 3-0 in the preliminary round, hopes were high that the Americans could advance to the gold medal game, but it wasn’t to be.

This marks the second straight quarterfinal elimination for the Americans in Olympic men’s hockey as they were beaten by the Czech Republic in Pyeongchang four years ago. They also went 0-5 in the shootout then.

Slovakia celebrated its first trip to the semifinals since Vancouver 2010.

Miro Aaltonen and Mikko Lehtonen scored in the first period and Finland never looked back en route to a 5-1 win over Switzerland.

Canada and Sweden faced off in Wednesday’s late game.

After recording the sixth-best time on his first run in the men’s slalom, France’s Clement Noel needed better results on his final trek down the mountain to finish in medal contention on Wednesday.

Noel’s second-run time of 49.79 seconds propelled him to the top of the time chart. His two-race total of 1:44.09 delivered a gold medal.

Austria’s Johannes Strolz, the current world champion, grabbed the silver in 1:44.70, while Norway’s Sebastian Foss-Solevaag was third in 1:44.79 at the Yanqing National Alpine Skiing Centre.

Noel was the fourth-place finisher in the slalom at the 2018 Pyeongchang Games.

In the run-up to the slalom, Noel said his preparations went well.

“I knew that I was in shape,” Noel said, according to The Associated Press, after winning the gold medal. “My races in January were not good but training here was really good — I was fast.”

Japan’s Yohei Koyama didn’t finish his first race, skiing off course. And he wasn’t the only one. A total of 34 skiers didn’t complete their opening legs on the icy course. That took them out of the running, and they didn’t take part in the second run.