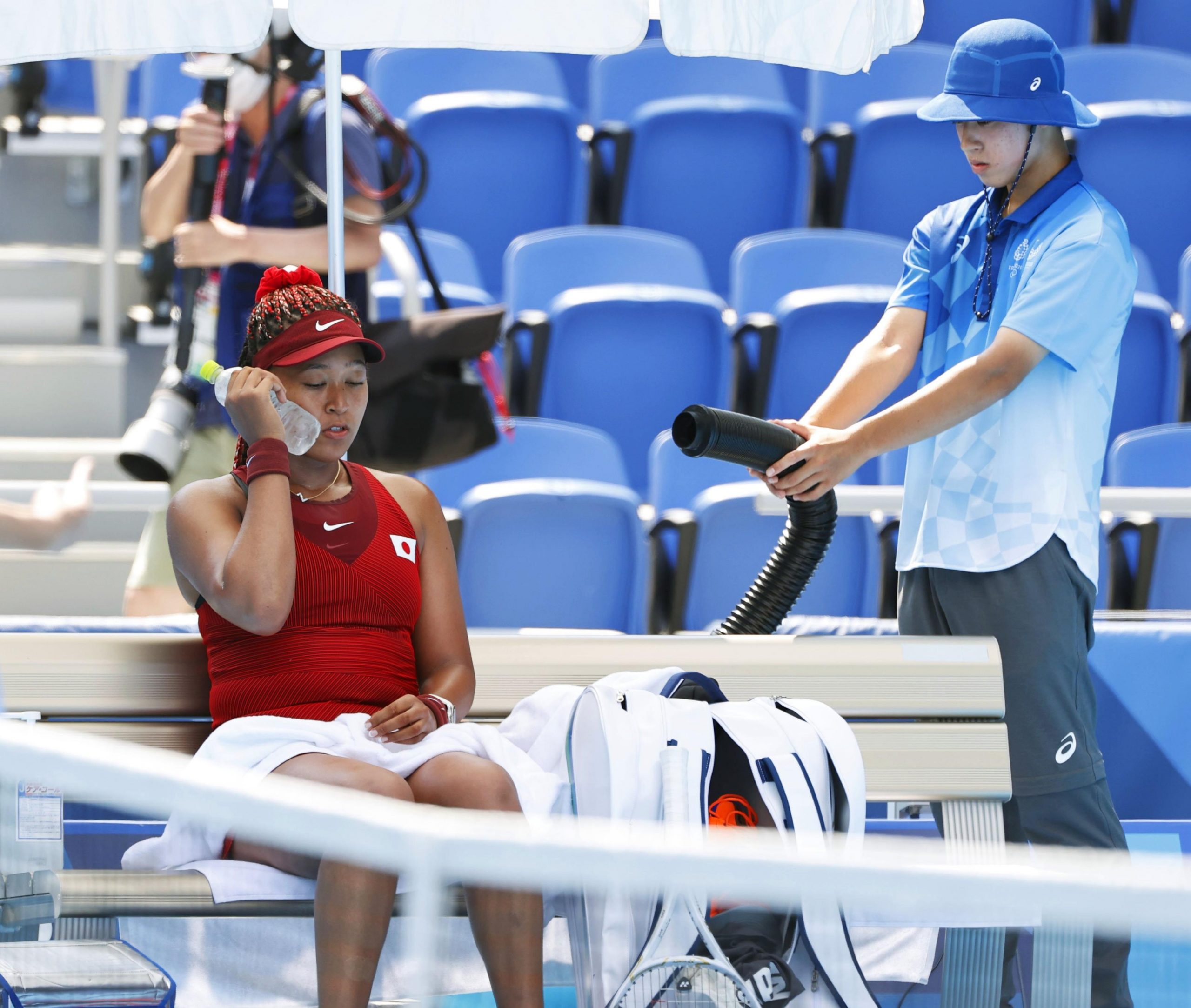 The Summer Games are in full swing the week of July 26, and the heat is up.

Tokyo’s weather is well-known to the locals, although perhaps it is not as imagined by some of the international athletes. Temperatures after the rainy season ends can hover in the mid-to -upper 30s Celsius, and humidity can sometimes reach 80%.

On the very first day of competition in Tokyo, Russia’s Svetlana Gomboeva fainted in the heat while checking the archery scoreboard.

Several athletes in the tennis competition on July 24, called medical breaks to cool down.

“Humidity is brutal, because it’s very hot and also very humid, so the hard courts absorb the heat, and it stays trapped in there,” said world’s No. 1 ranked men’s tennis player Novak Djokovic to The Wall Street Journal.

Even as recently as Sunday, July 25, athletes at Ariake Sport Skateboarding showed visible fatigue as the heat approached 32 C in the middle of the day.

“Your feet started burning up,” said the Californian Nyjah Huston, billed as the highest-paid skateboarder in the world.

The change in circumstances may be changing the performance of some athletes. “Your board gets so hot that it kind of flexes more. That’s kind of why I fell for one of those tricks out there,” Nyjah said to Olympics.com when trying to explain why he had a couple of failed tricks in the final.

At the beach volleyball arena at Tokyo’s Shiokaze Park, NBC News reported that the organizers started spraying sand with a water hose after competitors complained it was too hot to play barefoot.

The heat is not a new issue, and anyone coming to Tokyo would have been aware of it well before they arrived. Organizers of Tokyo 2020 responded to concerns raised about two years ago, for example, by moving some of the events to Hokkaido and Miyagi Prefecture, both of which are several hundred  kilometers north of Tokyo.

The heatwave is nationwide. As soccer games kicked off in Sapporo on July 21, the region was seeing a stifling 31-degrees heat.

Japanese are used to taking anti-heatstroke measures. Consumers go to a variety of products to fight the heat, and during hot periods, NHK news broadcasts, and those of other TV channels, share regular and warnings to avoid strenuous outdoor exercise in the heat.

This common knowledge leads to the question: Why are the Olympics held in the hottest period of the year in the first place? After all, in 1964 the Tokyo Olympics were held in October, not the hottest part of summer.

It’s widely reported that the simple answer is money paid for broadcasting rights.

The cost of broadcasting rights has ballooned, and now accounts for 70%  of the income of the International Olympic Committee. To give an example, the American company NBC pays approximately $1 billion USD per Olympic Games.

Viewership is driving the broadcasters who pay money for the right to broadcast the events, and by extension setting the sports calendars. October notably clashes with the National Football League’s regular season in the United States and several European pro soccer circuits, including the Premier League, Bundesliga and Serie A.

Therefore, it is understandable that major media outlets would choose to push for the Games to take place during a less busy sports period, but by doing so they are not thinking of the athletes.

Rising temperatures and their effect were also an issue at the 2019 World Athletics Championships in Doha, garnering attention for example when one Italian athlete collapsed from the heat during the marathon.

Let us hope that there will be heat-related considerations ー for the athletes sake ー going forward in scheduling the Olympic Games.

The second-most trending Olympics term was also related to women's skateboarding. The term was “ゴン攻め,” (gon-seme) a term coined by Ryo Sejiri, a professional skateboarder, while announcing the tournament. He explained that the term simply means to take the offensive, but the unusual phrasing brought attention to the new term.

Two more top-trending terms were “高視聴率” (koushichoritsu) and “瞬間最高 (shunkansaikou),” both referring to the viewership during the Opening Ceremony, the numbers for which were released on July 26. The first phrase, meaning “high viewership ratings,” recognizes the average 56.0% of the TV audience tuned in to the event, and the second points to the maximum percentage of 61.0% viewers at peak viewing time.

Skateboarding is trending worldwide as well, with Brazilian skateboarder Rayssa Leal at the top of charts midday on July 26.

Other Olympians were trending as well, including American swimmer Katie Ledecky, who claimed silver in the women’s 400-meter freestyle event, and American skateboarder Alana Smith.

Eight-time Olympian gymnast Oksana Chusovitina from Uzbekistan surprised the field by placing 14th in women’s vault qualifying on July 25. With only the top eight making it to the finals, she missed an opportunity to keep competing.

The 46-year-old, who is the oldest female gymnast of all time, announced her retirement from gymnastics after the competition. Her first Olympics was at the  1992 Barcelona Games.

"I'm alive, I'm happy, I'm here without any injuries, and I can stand on my own,” she was quoted as saving by the Canadian Broadcasting Corporation after her final competition.

Over the years, Chusovitina has represented the Unified Team (the 1992 team made up of athletes from the former Soviet Union), Germany and Uzbekistan. She earned a gold medal in the team competition in 1992 and an individual silver medal in the vault category at the 2008 Beijing Games.

As her gymnastics career came to a close, her fellow competitors, some of whom were younger than her son, gave her a standing ovation.


Judo Coach Uchida Remains Involved in the Sport at Age 101

The decision that spectators were going to be banned from the Olympics in most venues disappointed many, especially Yoshihiro “Yosh” Uchida. The legendary judoka and judo coach, who turned 101 this year and still continues to head the judo program at San Jose State University (San Jose, California), has a student, Colton Brown, competing in this year’s Olympics.

Brown will compete against Raphael Schwendinger from Liechtenstein in the men’s 90-kg elimination round of 32 on July 28. Although Uchida won’t be able to be there in person, “I’m going to be glued to it,” Uchida was quoted as saying by the Los Angeles Times, adding “unless it’s late.”

The missed opportunity would have been a chance for Uchida to reprise one of his most glorious moments. He coached the U.S. judo team at the 1964 Olympics, the first year the sport was in the Olympics. The inclusion of the sport was spearheaded by Uchida.

“I was so proud to be the first judo coach for the United States, and especially for the Japanese Americans who endured so much,” he was quoted as saying in an interview with California State University.

Known as the “grandfather of American judo,” Uchida was awarded the Order of the Sacred Treasure by Emperor Hirohito in 1986.

Tunisia’s Ahmed Hafnaoui earned the North African nation’s 15th all-time Olympic medal on Sunday, and just its fifth-ever gold, three of which were earned in the pool.

The 18-year-old swimmer shocked the field and won the men’s 400-meter freestyle final at Tokyo Aquatics Center in one of the biggest upsets of the Olympic’s opening weekends.

Tunisia’s first Olympic champion was Mohammed Gammoudi in the men’s 5,000 meters at the 1968 Mexico City Games. He placed runner-up to Billy Mills in the 10,000 at the Tokyo Games four years earlier. Gammoudi collected four overall medals between 1964 and 1972.

Hafnaoui followed in the footsteps of decorated swimmer Oussama Mellouli, winner of the men’s 1,500 at the 2008 Beijing Games and 10-km marathon swim at the 2012 London Games.

Tunisia, which made its Summer Games debut in 1960, has never participated in the Winter Olympics.

Ninety-seven years after Augustos Zerlandis reached the third round of the tennis competition at the Paris Olympics, Stefanos Tsitsipas became the second Greek man to win an Olympic singles match.

Tsitsipas topped Germany’s Philipp Kohlschreiber 6-3, 3-6, 6-3 and was thrilled with the outcome.

“[Winning] still seems like a dream, but being able to swim here was such a fun experience. From tomorrow [July 26] the 200 meters starts, I would like to switch my mindset, and work hard in that category as well.”

ーSwimmer Yui Ohashi, on her prospects after winning the gold medal in the women’s 400-meter individual medley on July 25.

"[The medal] is heavy, but my heart feels like it's bouncing. I'm so happy the three of us were able to win Japan's first medal in the men's team in Tokyo, at a Games held under these conditions. I've always wanted a team medal."

ーTakaharu Furukawa, a member of the Japan men’s archery team (along with Hiroki Muto and Yuki Kawata), received its first-ever team medal, a bronze, on July 26.  Furukawa was an individual silver medalist at the 2012 London Games