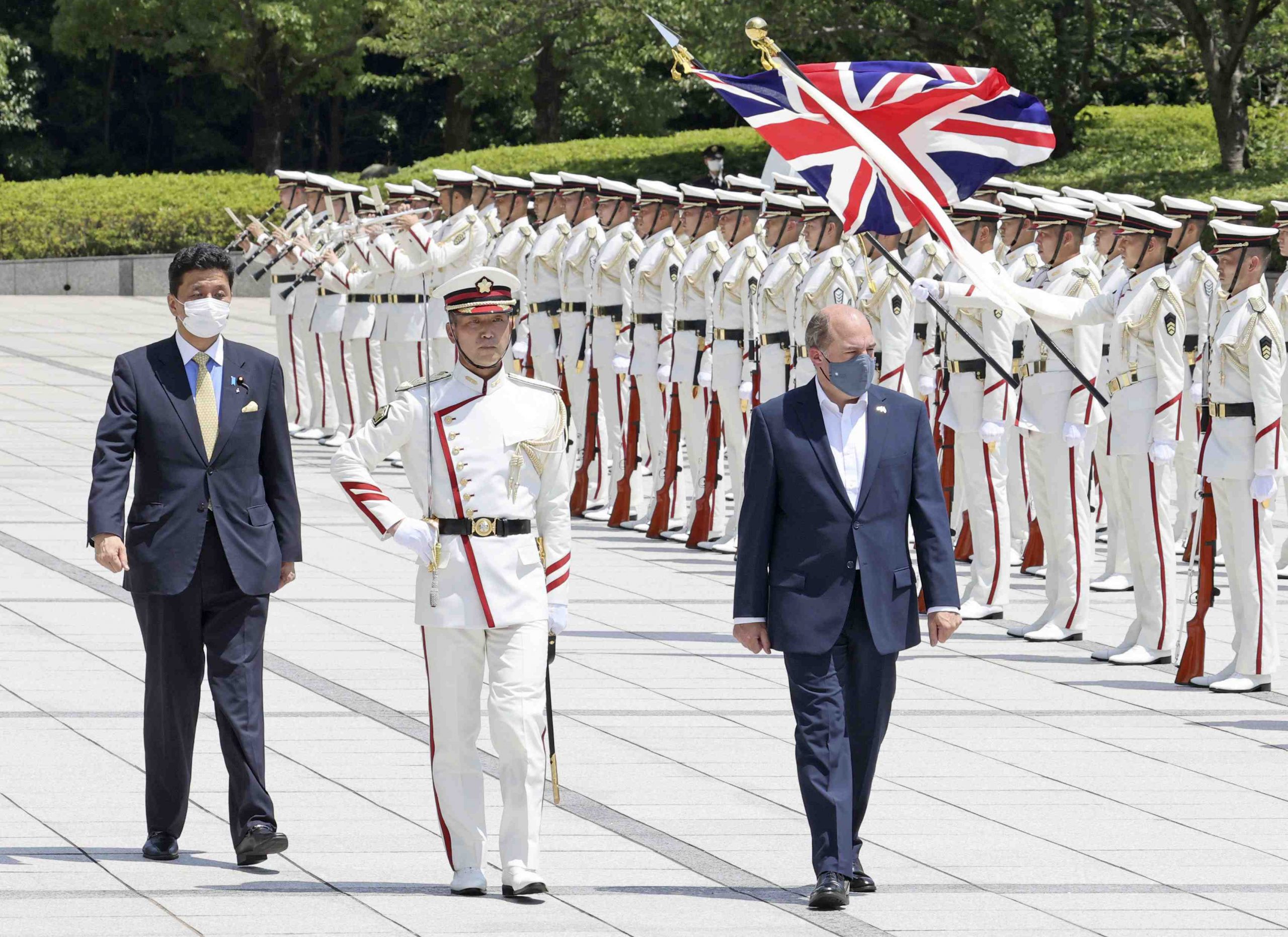 The U.K.ーJapan defense relationship that is sometimes termed a ‘quasi alliance’ is being “elevated to a new  level” - this was the message from a delegation visiting Japan last week led by the British Secretary of State for Defence, Ben Wallace.

Two features of this visit in particular, in content and style, give clues to what such an “elevated”relationship might mean.

To begin with, the exceptionally large delegation that accompanied the Minister signals that Global Britain is committed to developing U.K.ーJapan defense cooperation in areas that require engagement at a senior level across multiple domains of military action.

Admiral Tony Radakin, First Sea Lord of the Royal Navy, surely had much to discuss with his counterparts. Ben Wallace had chosen a press conference in Tokyo to make two big announcements on the maritime front (traditionally a prominent domain for Anglo-Japan cooperation).

Second, the UK will dedicate a Littoral Response Group (LRG) to the region in the coming years, in order to demonstrate Britain’s commitment to  “collective defense and security in the Indo-Pacific ” for decades to come.  The exact composition of the LRG is not specified, but it is expected to include capabilities for operational and capacity building activity on roles including  amphibious warfare, counter-terrorism, and evacuations. It may be small in terms of tonnage compared with HMS Queen Elizabeth, but by persistent presence it makes up for what it lacks in scale and is well adapted to ‘grey zone’ action.

Mention of the term ‘collective defense’ in this context may be significant. The U.K. does not have treaty obligations that bind it to assist an ally under attack in this region. The Five Power Defense Arrangements do not include such a provision, and the NATO charter limits obligations to the North Atlantic area.

Use of this term in a formal record of talks Wallace had with P.M. Suga and Minister Kishi potentially injects a dose of constructive ambiguity into assumptions about how the U.K. would respond in a crisis involving Japan. Given Tokyo’s desire to use diversified security partnerships to enhance deterrence, this reinforces the privileged position Japan occupies as the U.K.’s main Asian partner as it puts flesh on the bones of its “tilt’ to the Indo-Pacific.

The appearance of a second senior officer, Air Chief Marshal Sir Mike Wigston, Royal Air Force Chief of Staff, indicates cooperation in the air domain also continues to develop. Following their meeting on July 20, defense ministers Wallace and Kishi confirmed discussions to explore collaboration on 6th generation fighter programs, Japan’s FX and the UK Future Combat Air System, at ‘sub-system level’ with a focus on power and propulsion systems. Openness to work together on such critical and sensitive areas of techno-industrial development indicates an exceptionally high level of trust and mutual respect.


When the delegation visited the Japan Air Self Defense Forces (ASDF) Air Defense Command at Yokota Air Base on July 19, they most likely discussed upcoming exercises between the ASDF and the air wing of the Royal Navy’s Carrier Strike Group (CSG). HMS Queen Elizabeth has Royal Navy and Royal Air Force “Lightning” jets embarked, and Japan is in the process of converting its own helicopter carrier to launch ASDF fixed-wing aircraft of the same type (F-35B).

Anglo-Japan cooperation on naval aviation goes back a century, and this leads to the second notable feature of this visit.

Symbolically speaking, there could hardly be a more perfect metaphor for the Anglo-Japan Alliance than the Miksasa - the flagship of Admiral Togo that was built by Vickers Armstong in Barrow in the Northwest of England, and commissioned the very year the Alliance began, in 1902. On July 20, parliamentary Vice-Minister of Defense Matsukawa Rui invited the British delegation to the memorial ship in Yokusuka, where they spent time reflecting on many reminders of the alliance gone by. The use of shared history in this way was the second feature of this visit that merits attention.

Even the postwar story of Mikasa’s restoration is symbolic. Following the Washington Naval Treaty that also spelled the end of the Alliance, Mikasa was decommissioned on September 23, 1923, and spent the following years encased in concrete. U.S. Admiral Chester Nimitz had been a lifelong admirer of Admiral Togo. The two had met at a Tokyo garden party in 1905 and Nimitz represented the United States at his funeral in 1934. When the American Admiral returned to Japan in 1945 he defended the ship from souvenir-hunters and Russian demands that it be dismantled, and was active in raising money for the ship’s restoration later in the 1950s.

So in a reversal of the pressure from Washington that ended that past Anglo-Japan alliance, there is now a growing trilateral U.S.A.ーJapanーU.K. formation demonstrated by recent agreements, and the presence of the Destroyer USS The Sullivans and U.S. Marine Corps jets embedded in the Royal Navy Carrier Strike Group.

The orchestration of the Mikasa visit is just one instance of how both sides are stepping up efforts to broaden public understanding and galvanize a base of popular support for this partnership.

As democracies, deeper public support sends a signal of resilience about the partnership and strengthens deterrence. This may have been the logic behind the video depicting Japan’s plans for joint exercises with the CSG that was tweeted by Japan’s Joint Staff Office in Chinese around the time HMS Queen Elizabeth sailed through the Suez Canal.

More of this can be expected to bring along public opinion behind the strategic objective of closer and mutually supportive relations. During the visit, it was announced that HMS Queen Elizabeth would berth at the U.S. naval base in Yokosuka, and the other escort ships would berth at JMSDF Yokosuka, JMSDF Maizuru, JMSDF Kure, U.S. naval base Sasebo and the White Beach area.

Finally, the mention of plans for ‘collaboration on responses against ship-to-ship transfers’ in the context of UN Sanctions enforcement on North Korea in the joint communique serves as a reminder that this partnership is about much more than symbolism and PR. The signs are that reaching the ‘next level’ also means more operational cooperation is on the way.