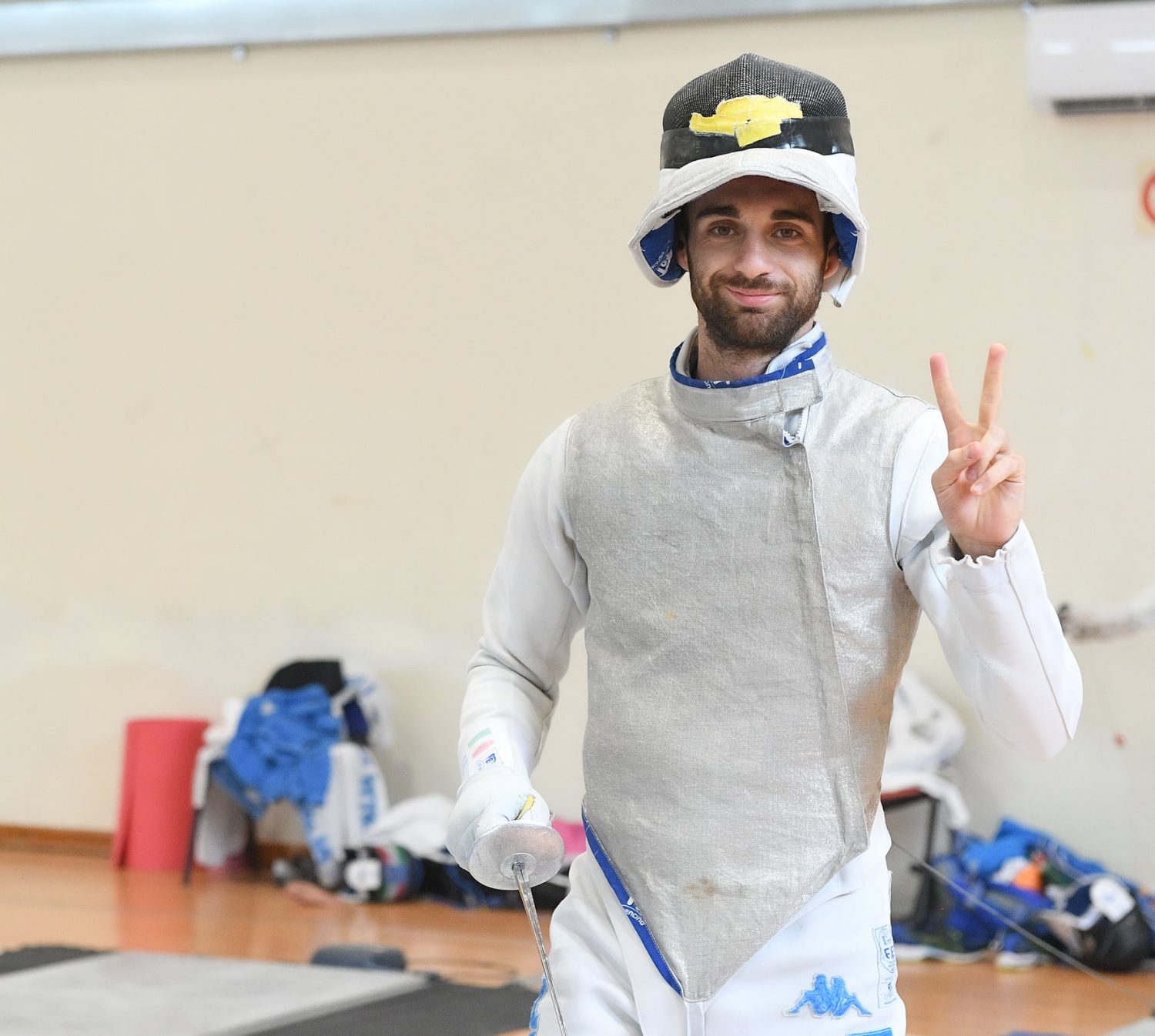 “Oh, hello! I’m just about done with training, let me just move to the room next door, just one moment.”

With a dim sound of chatter fading in the background, Italian athlete Daniele Garozzo, 28-years-old, took my call, and with a warm yet modest attitude chatted with me for a JAPAN Forward interview.

Just under the age of 30, a police officer and aspiring medical doctor, he is, more importantly, one of the top fencing athletes in the world. Ranked seventh worldwide in the 2020-21 season, he is known to have started training as a teenager in a garage just with a dummy. His older brother, Enrico, trained with him then.

Fast forward and both brothers are Olympic athletes. Daniele Garozzo won the gold medal, and his brother Enrico won silver in the epee category, in the 2016 Rio de Janeiro Olympics Games.

And now Daniele is looking for more. More recently, Garozzo took first place in a national competition that was held in early June, and now is focusing on the Tokyo 2020 Olympics. He is one of 24 Italian athletes to compete in Fencing in the Games.

Italy has historically been quite an important presence in the world of fencing, being the country with the third most medals in fencing at the 2016 Rio de Janeiro Olympics, after Russia and Hungary. At the time, Italy collected eight medals, of which three were bronze, four silver and one gold. The gold was the one won by our interviewee, Daniele Garozzo.

JAPAN Forward asked him about his year of training during the pandemic, his road to Tokyo 2020, and his hope and aspirations for a historical set of Olympics Games.

Not Your Usual Year

How is life for an Olympic athlete during COVID-19?

It’s a question I have often found myself asking, after seeing reports of swimmers improvising training in the bathtub, and any kind of tool to train while staying at home.

Italy was a country which was hit by the pandemic early on in Europe, and had already called a national lockdown in March 2020. Many regions have dipped in and out of strict lockdown measures ever since.

In the midst of all this, Garozzo was not very different from the average person his age, and commented that despite the difficulties, he tried to make the most of if it:

“It was a particular period, a difficult year. I was quite lucky because I managed to approach the period positively, because I was able to focus on my studies.”

He studies medicine at a university in the outskirts of Rome, and has previously stated his interest in focusing on orthopedic medicine. However, when I pressed him on this point, he laughed evasively.

“I have already changed my mind! I feel like the closer I get to graduating, the more undecided I become about what specialty to choose in medicine. For now, I will focus on the Tokyo Olympics, then in due course see in which direction to go.”

From a sports perspective, Garozzo was also quite positive about the time he passed during COVID-19: “I have continued training, I have kept in shape. All in all, a period which was negative for the whole world, I have managed to pass relatively well.”

Despite the continued training, the foil specialist was open that it was a complicated year in terms of competitions and keeping up the pressure for training.

According to the International Fencing Federation website, in the 2018-19 season Garozzo participated in 10 international competitions. In comparison, this season shows only one championship: Grand Prix in Doha, Qatar, in March 2021, where he came 17th.

For the fencer, things seem to be looking up, however. Recently, he participated in the Italian Absolute Championship in Cassino, not too far from Rome, held in early June 2021.

There he garnered first place. Reflecting back on the victory, Garozzo shared his thoughts on the matter: “As fencing athletes, we’ve had a very unique season because we’ve had virtually no competitions. Therefore, it gave me quite a lot of pride to have a positive result in virtually the only major competition that took place.”

He continued with resolve: “The event provided some positive feedback just before the most important event, the Tokyo 2020 Olympics.”

With just one month to go, Garozzo explained a little of his training strategy in view of the Games.

“I am working hard, to refine my technique and to train physically, but in this last period I am mainly focusing on my mental preparation, so that I can be at the best of my capabilities when it’s show time.”

Physically, in late 2017 Garozzo suffered from a rare case of a collapsed lung and subsequently underwent several surgeries. But has since gained back his physical form.

The foil specialist gave some insight on how losing concentration, a crucial mistake in many sports, can be particularly critical in fencing.

“Our sport is one of mental presence,” he stated. “You can train to death both on a physical and technical level, but if you get distracted for three or four minutes at the beginning of a competition, you could be out of the race in the blink of an eye, and nullify the hard work you put in for the last four years.”

He commented almost wryly: “This is the best and worst aspect of fencing.”

While working hard, Garozzo also showed a certain stoicism for what was to come: “I am putting all my energy into training. […] The rest, it’s out of my hands, and I will accept anything that comes my way with open arms.”

‘A Powerful Signal to the World’

With the Tokyo 2020 Olympics and Paralympics taking place while the world still fights against a pandemic, the challenge of hosting the Games is greater than perhaps ever before.

The health crisis prompted the Games to be postponed to July 2021, and debate has been rampant in Japan regarding what shape the Games should have now that the Opening Ceremony is drawing near.

RELATED Japanese Businesses Weigh In on Holding the Tokyo Olympics

Regarding the hosting of the Tokyo 2020 Olympics, Garozzo was unequivocal in his approval of the decision:

“Japan is sending a very powerful message, to the whole world, which symbolizes an active willingness to start anew. Hosting these Games is the right choice as a first step towards a new beginning.”

At the same time, the athlete showed understanding of the challenges of hosting the Games during COVID-19: ”Of course, there are difficulties, which Japan is also going through as a country affected [by COVID-19],” he said.

As any young athlete would, Garozzo reflected that on some level it was also a pity that the Olympics Games couldn’t be the extravaganza they normally are, elaborating thus:

“The Olympics are such a unique event, it’s always a pleasure to participate.[…] They are such a global event, they are a celebration, not just for athletes, but also for all those people who love sport. There is no event which is as unifying as the Olympics. With the restrictions, which are all justified, this will mean that we will only be able to partially enjoy this mood.”

After all, he commented, in his lifetime he might be able to enjoy only “two, three or at the very maximum, if you dream hard enough, perhaps four editions of the Olympic Games.”

The regret of not being able to enjoy the competition to its fullest potential rings particularly true as I discovered that Garozzo has visited Japan many times for competition, and has previously expressed his interest in Japanese culture. Most recently, he participated in the Tokyo World Cup in January 2019, and thus commented on his stay:

“I know Japanese culture relatively well, as I come to Tokyo every year for the Fencing World Cup. It’s a wonderful country, with a wonderful culture, where people are really welcoming and kind.”

The fencer confessed that he had originally planned to visit and go traveling all around Japan with his partner, fellow Italian Olympic fencing epee athlete Alice Volpi. Unfortunately, many of the things he wanted to do won’t be possible this year. However, he concluded in high spirits that he planned on focusing on the competition, and he said: “If possible, I definitely want to binge-eat sushi!”

What struck me most was the ardour with which he directed his message to the host country, Japan:

“Thank you, Japan for deciding to host the Olympics Games, because for us athletes they are very important. We understand that there are sacrifices that Japan is going to have to make, but I think it is essential [to host the Games] to send a strong message of a recovery to the whole world.”

He concluded with a strong message: “We have high hopes that things will go well [at the Olympics]. It’s essential to get involved, and take the leap in order to initiate recovery, because all of us are in dire need of starting our lives once more.”

Let us hope that despite the restrictions, Olympics and Paralympics athletes like Garozzo can enjoy the Olympics experience to the utmost. And perhaps, who knows, binge-eat some sushi along the way.

According to Garozzo, the Italian fencing team is set to arrive in Japan in mid-July. The fencing competition of the Games, divided into epee, foil and saber, is set to take place at Makuhari Messe, Chiba, in Tokyo Bay, from July 24 to August 1.

RELATED: INTERVIEW | One Month to the Olympics, with Tokyo 2020 President Seiko Hashimoto