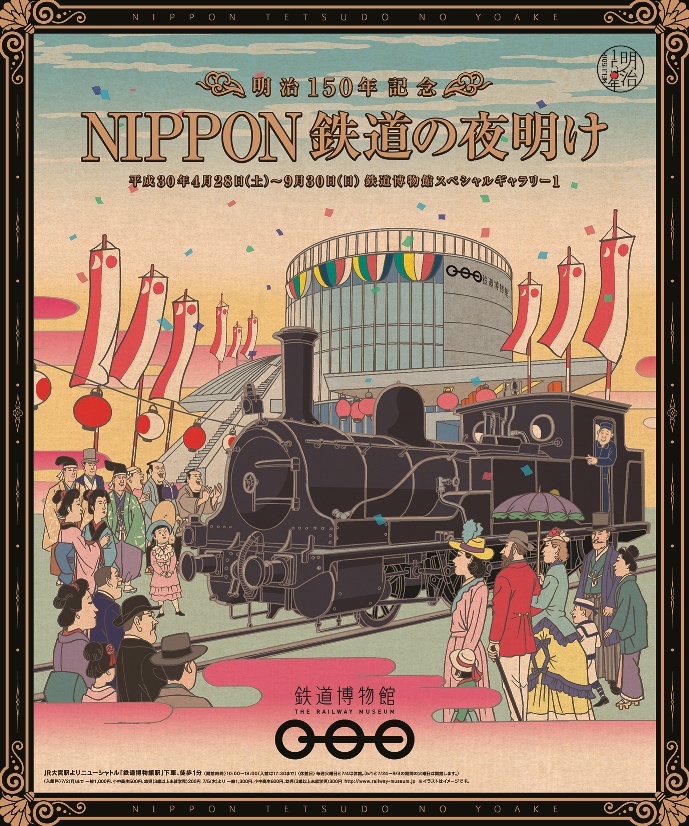 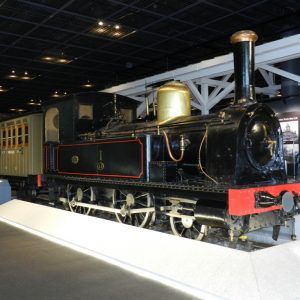 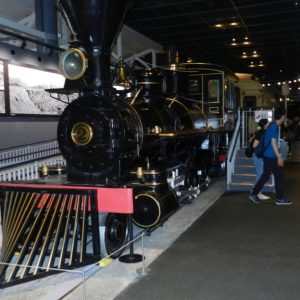 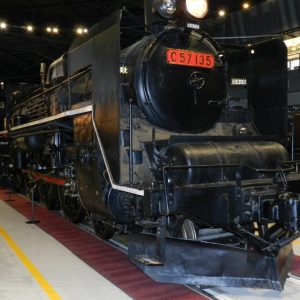 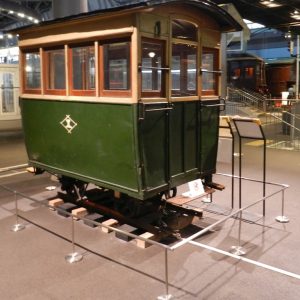 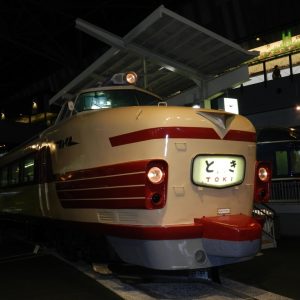 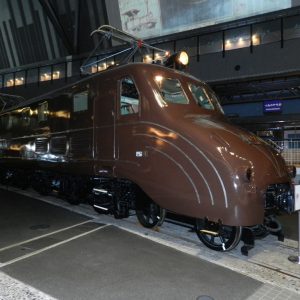 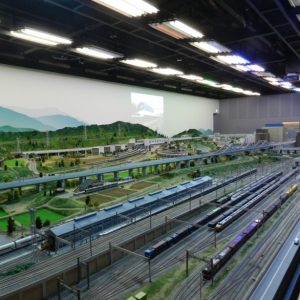 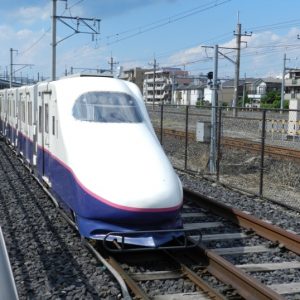 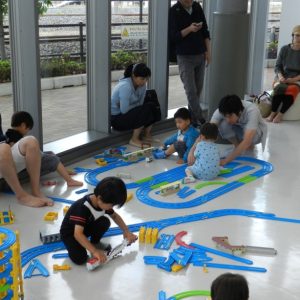 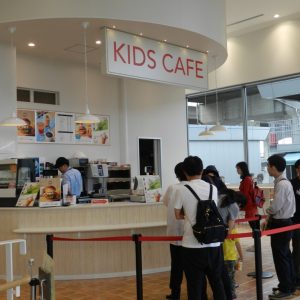 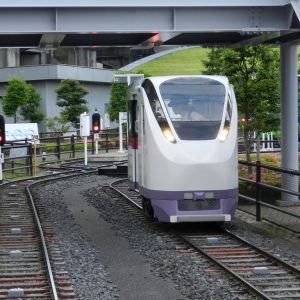 One key component of this was the construction of railroads. Whereas the pre-Meiji regime carried out limited road and bridge building and restricted the size of ships, the new Meiji government saw improved transportation in general—and railroads in particular—as of prime importance in making Japan a strong, modern country.

Just five years after the overthrow of the Tokugawa regime and its replacement by the new Meiji government, Japan completed its first railroad, running between Yokohama and Tokyo. It had nine passenger trains per day and covered the distance in 53 minutes.

Kobe and Osaka were linked by rail in 1874. Kyoto-Osaka followed three years later, in 1877. By the end of the Meiji era in 1912, Japan had an impressive national railway network connecting most major cities on all four major islands, not just in Honshu, but also Kyushu, Shikoku, and Hokkaido.

The building of Japan’s rail system is taken up in a special exhibit that opened on April 28 and runs until September 30 at the Omiya Railway Museum.

Fittingly, Omiya is a city north of Tokyo that grew with the building of the Meiji railroads, especially the Tohoku Line completed in 1891, which runs from Ueno Station in Tokyo to Aomori city at the north end of Honshu. The museum itself was the centerpiece of the “JR East 20th Anniversary Memorial Project.”

The special exhibition displays an impressive collection of documents and photographs from the period. While there are no English explanations, many of the items are easily understood without words. Moreover, contrary to what might be expected when the era was well before color photography, many of the depictions of the early railroads are in fact in very vivid colors.

The wood block printing technology that had been used for the ukiyo-e genre so popular in Europe after the opening of Japan was applied to contemporary subjects from about 1853-1854, even before the Meiji Restoration.

This resulted in numerous colorful woodblock prints depicting the new railroads. Some were quite accurate. Others were quite fanciful. My favorite is one depicting a passenger train pulled by a steam engine with paddle wheels and double decked carriages. It was similar in appearance to passenger steamers in mid-19th century America.

Produced in 1861, this print is a reminder that even before the Meiji Restoration there was knowledge of railroads in Japan. There were written references to railroads in Dutch texts that were the main source of information about Europe before the opening of Japan. Also, a Russian expedition to open Japan in 1853 brought a model railroad, as did Perry in 1854.

Japanese Talent Ready to Use

Standing in marked contrast to the colorful and sometimes wildly fanciful woodblock prints are the many meticulously detailed maps and drawings on display, many of which pre-date the first railroad construction. These give two major hints as to why Japan was able to modernize so rapidly after the Meiji Restoration.

First, they indicate intellectual curiosity in general and curiosity about things foreign in particular. This was noted by S. Wells Williams in his book A journal of the Perry Expedition to Japan (1853-1854), where he compares the Chinese and the Japanese based on his earlier experiences in China.

Whereas Chinese officials had no interest whatsoever in the technology embodied in Perry’s armada, the Japanese were curious about anything and everything, asked questions to the point of annoyance, and made sketches of everything they could.

Second, the detailed maps and drawings surviving from this period show that, well before the Meiji Restoration, and even before the opening of Japan, surveying, cartography, and engineering drawing were already at a high level.

Therefore, when European construction and technology was introduced to Japan, there were existing technologies and human resources that could be drawn upon. This helps to explain how the first rail line could be completed in just two and a half years, despite no tradition of railroad building.

It also explains how all manner of construction projects with no historical antecedents could be planned and completed remarkably rapidly. Moreover, rapid construction did not mean shoddy construction. Numerous fine examples of early Meiji construction remain even today, although many have been moved to preservation sites, such as the Museum Meiji-mura in Inuyama City, Aichi Prefecture.

This is not to say that the Japanese were fully capable of modernizing along European lines without foreign assistance. Many foreign experts were brought to Japan to do what is now called “technology transfer.” Collectively called oyatoi gaikokujin (honored foreign employees) and numbering in the hundreds, they made major contributions to the modernization of Japan. Their assistance came in fields such as agriculture, medicine, engineering, and even humanities and social science fields, such as anthropology, archaeology, literature, and music.

The assignment of these foreign experts was essentially to make themselves redundant by training Japanese individuals who would replace them, or by setting up academic programs that would produce Japanese with sufficient expertise that foreign advisers would not be needed.

For this, they were generously rewarded. Typically, they were provided European-style housing, servants, and other amenities. In some notable cases, they were paid several times more than the highest paid Japanese government officials. By the mid-1880s most oyatoi gaikokujin were gone, having either succeeded or proved too costly to keep.

In the case of Japan’s first railroad, the o-yatoi gaikokujin was Edmond Morel (1840-1871). Morel was a British civil engineer who had previously been involved in railroad planning and construction in Australia, New Zealand, and Borneo. He planned the Tokyo-Yokohama railroad relying on local procurement wherever possible to keep construction costs down.

His efforts were so appreciated that he was given a bonus of JPY5,000, an enormous amount at the time, but he died from tuberculosis before the line was completed. His grave is in the Yokohama Foreign General Cemetery, popularly known by its abbreviated Japanese name, Yokohama Gaikokujin bochi.

Although his project is usually described as a railroad between Tokyo and Yokohama, the terminal stations were Sakuragicho in Yokohama and Shimbashi in Tokyo. Edmond Morel is memorialized by a bronze bust at the present day Sakuragicho Station. The Shimbashi terminus was some distance from the present day Shimbashi Station, although the old terminus remained in use until Tokyo Station was opened in 1914.

The designer of the Shimbashi Station was another oyatoi gaikokujin, an American named Richard Perkins Bridgens (1819-1891).

Although the Meiji era building was demolished when redevelopment of the surrounding freight yard started in 1995, a faithful reproduction of the station was built and is open as a museum.

In addition to the many texts and graphics in the special exhibit, the Railway Museum also has a large collection of engines and carriages from the Meiji era to the present, including Engine No. 1 from the original Tokyo-Yokohama Line. It was built by the Vulcan Foundry Limited, a British company based in Newton-le-Willows, Lancashire, and saw service on railroads in Kobe and Shimabara after being removed from the Tokyo-Yokohama Line.

The museum has several small trains that children can pretend to drive around on tracks in an outdoor area. I was particularly impressed by the number of young girls who were enthusiastically driving their trains around the circuit. As Tokyo commuters will know, many conductors are young women and, from time to time, I see female train drivers.

There are also several train simulators that allow children to get a sense of what it is like to be a train driver. For younger children there is a room with a large stock of Plarail kits that can be freely assembled into complex railway layouts. Seeing this made me recall when much of our apartment was taken over by elaborate Plarail circuits assembled by our two sons.

The museum aims to “preserves both the physical elements and heritage of railways in Japan and abroad.” There is much Japanese overseas history worthy of future attention by the museum, including Japan’s efforts in Taiwan and Korea, and it is hoped the museum will add exhibits in these areas.

After Taiwan was ceded by China to Japan in 1895, Japanese authorities began building a railroad grid in Taiwan. Private companies also built railroads to serve specific industries. Quite a few of the Japanese-built rail lines remain in use, and some of the colonial era stations have been designated historic sites.

Japan built an extensive rail network in Korea during its 35-year administration. The South Manchuria Railway, a national policy company founded by Japan in 1906, was important not just in terms of the economy of Northeast China, but also to Japan itself. More than just a railroad, Mantetsu, as it is usually called, operated all manner of enterprises, including hospitals, hotels, mines, and think tanks.

Its super express—the Ajiago (Asia Express) inaugurated in 1934—was the first air-conditioned train in Asia and the fastest scheduled service in Asia. At the time, it was even faster than any scheduled train in Japan. Taiwan and Korea were explicitly part of Japan until 1945, and the engineers and technology from Mantetsu in particular made a documented contribution to post-war Japanese railroads.

The museum is particularly good if you have young children or are interested in JR rolling stock. The Meiji exhibit is excellent, and one hopes the museum will do more to offer foreign language options, so visitors can get the most out of it. User evaluations on several travel web sites highly recommend the museum as a rainy-day excursion if you have children.

The museum is closed on Tuesdays—except in August, when it is open every day. Beginning July 5, admission is JPY1,300 for adults, JPY500 for school children, and JPY300 for pre-school children above the age of three. Various tickets combining rail travel with museum admission are also available.

Omiya is served by several JR East commuter lines, including the Saikyo Line (Ikebukuro and Shibuya) and the Keihin Tohoku Line (Ueno, Tokyo, Hamamatsu, Shinagawa). Travel time from Tokyo Station is about 35 minutes. The museum itself is 4 km north of Omiya Station and can be reached by a driverless rubber-tired train called the New Shuttle. Get off at the Tetsudo-Hakubutsukan Station.