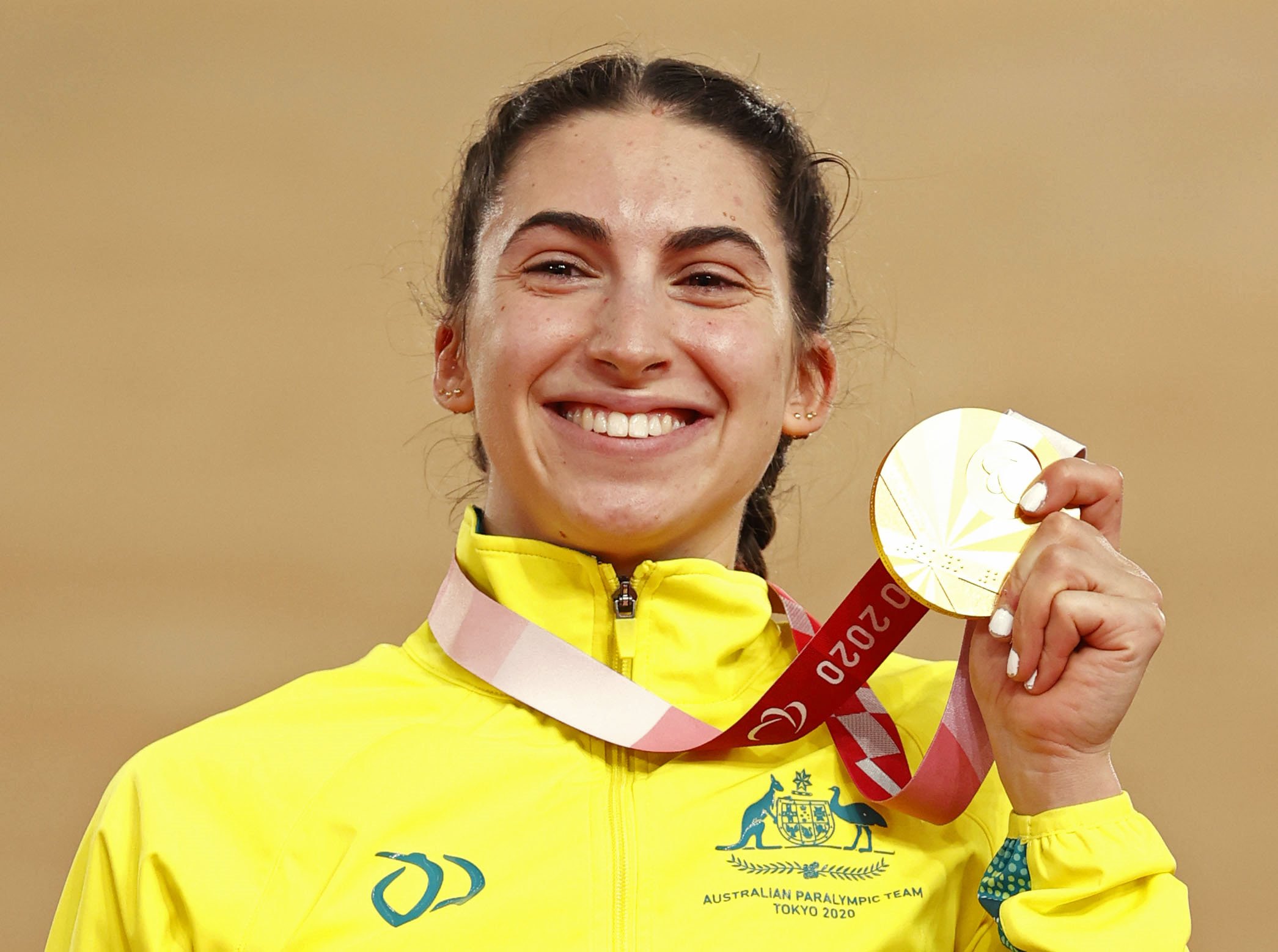 Two dozen gold medals were awarded on the first day of competition at the Tokyo Paralympics, and Australian cyclist Paige Greco celebrated the excitement of winning the first one.

Greco clocked a blistering average speed of 46.791 seconds per lap en route to a first-place finish and a world record. The first gold medal of the Tokyo Paralympics was secured at about 2 p.m.

“It feels amazing,” Greco was quoted as saying by The Associated Press. “I still can’t believe it. I keep looking down and seeing [the gold medal]. It’s not really sunk in yet.”

Medals were awarded in several cycling track events along with swimming and wheelchair fencing on Wednesday.

The individual pursuit C1-3 classification groups cyclists with lower-limb mobility issues. According to the 2012 London Paralympics website, the C classification group includes “athletes with an impairment that affects their legs, arms and/or trunk but compete using a standard bicycle.”

A more thorough breakdown from the London 2012 glossary follows:

Greco has hemiplegic cerebral palsy, which has affected the right side of her body since she was born. She is classified as a C3 cyclist.

“I’ve been working really hard,” Greco said after the race. “Before cycling I did athletics and that built a really good foundation of strength and my ability of how to race and how to pace myself on race day.”

Greco competed in para athletics for seven years until switching to cycling in 2018. She enjoyed success early on after making the switch.

Greco won the women’s 500-meter time trial C3 event and the 3,000-meter individual pursuit at the 2019 UCI Para-cycling Track World Championships in the Netherlands. In 2020, she repeated as world champion in the 3,000-meter race in Canada.

“Yeah, I’m fairly new to it,” Greco remarked after Wednesday’s race. “2019 was my first international competition, so it’s been a pretty awesome few years. I’m loving every bit of it.”

Fond of competition and the pursuit of medals, Greco told Paralympics Australia in 2019 that her favorite quote is the following: “You don’t know what you’re capable of until you’re in the moment.”

Greco’s momentous occasion on Day 1 of the Paralympics featured a precise blend of keen concentration, consistent speed, impressive execution and overall awareness on the track.

“To do a 3:55 was just tremendously amazing,” Schindler said, according to the International Paralympic Committee website. “To get six seconds faster than my personal best before, so I was relieved everything followed for me.

“It felt like a gold medal and I’m super happy with the bronze. It’s just amazing for me.”

Storey, 43, entered the Tokyo Paralympics with a combined five gold medals from the past three Paralympic Games. She has a grand total of 15 medals, with five silver and five bronze on her glistening CV.

Bangma’s B classification is for blind cyclists, and he competes in tandem with a pilot, Patrick Bos. Five years ago, Bangma collected the gold in the men’s B 1,000-meter time trial at the Rio de Janeiro Paralympics.

The Niigata Prefecture native finished the race in 2 minutes, 26.18 seconds.

Singapore’s Pin Xiu Yip won the event for the second straight Paralympics, touching the wall in 2:16.61. Mexico’s Fabiola Ramirez claimed the bronze in 2:36.52 in a race completed around 5:45 p.m.

Yamada’s legs are of different lengths. She doesn’t have arms, a condition she was born with.

That hasn’t stopped her from excelling as a para swimmer at a precocious age, erasing Yoshinori Shimazu’s name from the record book as Japan’s youngest Paralympic medalist. Shimazu was 16 years old in 1984, when he hauled in a bronze in the men’s B3 100-meter athletics race at the Stoke Mandeville and New York Games.

Yamada adhered to her coach’s advice to secure a medal.

She explained it this way: “I took my coach’s advice to slow down my strokes, and tried to be calm and not be overwhelmed. It was the most thoughtful race I have ever done.”

About an hour later, Paralympic veteran Takayuki Suzuki received the bronze in the men’s SB3 50-meter breaststroke final in a time of 49.32.

The 34-year-old Suzuki made his Paralympic debut at the 2004 Athens Games. He won the event at the 2008 Beijing Games.

In the SB3 category, swimmers have severely limited use of their limbs, including those with multiple amputations.

There were 15 swimming event finals in an action-packed evening at the pool.

Among the winners was Chile’s Alberto Abarza, a 36-year-old who competed in the men’s S2 100-meter backstroke. He became Chile’s first Paralympic gold medalist, finishing the race in 2:00.40.

“It was the greatest dream that I had in sport, to win, and now I have reached this dream,” Abarza revealed afterward.

Reigning Women’s Champion U.S. Falls to the Netherlands in Opener

The Netherlands opened its Paralympic campaign with a 68-58 victory over the United States, the 2016 Rio Games champion, in a women’s preliminary round Group B match at Musashino Forest Sport Plaza.

Mariska Beijer paced the Dutch squad with 28 points and Bo Kramer poured in 20.

For Team USA, Lindsey Zurbrugg was the top scorer with 20 points.

In a Group A match, the Japan women’s squad hammered Australia 73-47.

How Wheelchair Teams Are Organized

To understand how wheelchair basketball is organized, Olympics.com explained the on-court makeup of teams at all times in an online report.

In short, teams are comprised of athletes who are affected by varying degrees of impairment. They are required to field a lineup at all times with a mix of players to match the different types of impairments.

“All athletes compete in a wheelchair and have an impairment affecting their legs and arms. Players, for example, have amputations or paraplegia. Not all the players are wheelchair users in daily life,” the article stated.

“Every player is assigned a point value based on their functional ability, from 1.0 for a player with the least physical function (‘low-pointer’) through to 4.5 for the most physical function (‘high-pointer’). While most athletes have normal arm and hand function, the main differences between athletes of different sport classes are trunk control and sitting balance, which allows them to lean forward and sideways to catch and pass the ball.

“There are 12 players in each team, with no more than five on court. The five players on court are only allowed to have a maximum of 14 points.”

Japan and France produced one of the most exciting, dramatic duels of the day at the Paralympics. Japan triumphed 53-51 at Yoyogi National Stadium in the pool phase Group A showdown.

After Jonathan Hivernat pulled France within 52-51 with 11 seconds remaining, Japan called a timeout.

Seven seconds later, team captain Yukinobu Ike, who lost his right leg after an automobile accident at age 19, scored a try before the clock ran out following a riveting mixture of collisions, high-speed tumbles and nifty spins as the athletes created space to take shots and score tries.

In wheelchair rugby, a try is worth one point; in rugby union, it is worth five points.

The 41-year-old Ike, who moved to Alabama in 2018 and played for the Lakeshore Demolition wheelchair rugby team for around half a year, had a team-best 20 tries, while Daisuke Ikezaki added 13.

Hivernat finished with a match-high 31 tries.

In an earlier Group A match, Denmark topped Australia 54-53.

In Group B, the United States defeated New Zealand 63-35 and Great Britain prevailed 50-47 over Canada.

The competition is mixed gender.

In a men’s preliminary Group A match, Japan outscored Algeria 13-4 in the teams’ Paralympic opener at Makuhari Messe in Chiba.

Kazuya Kaneko led Japan with six goals on regular throws. He added another on a penalty throw.

Goalball, which is played on an indoor arena, has three players per team on the court at the same time. Blind and visually impaired players compete by taking turns rolling or bouncing the ball at the opposite goal. There are several bells inside the ball to help players locate it.