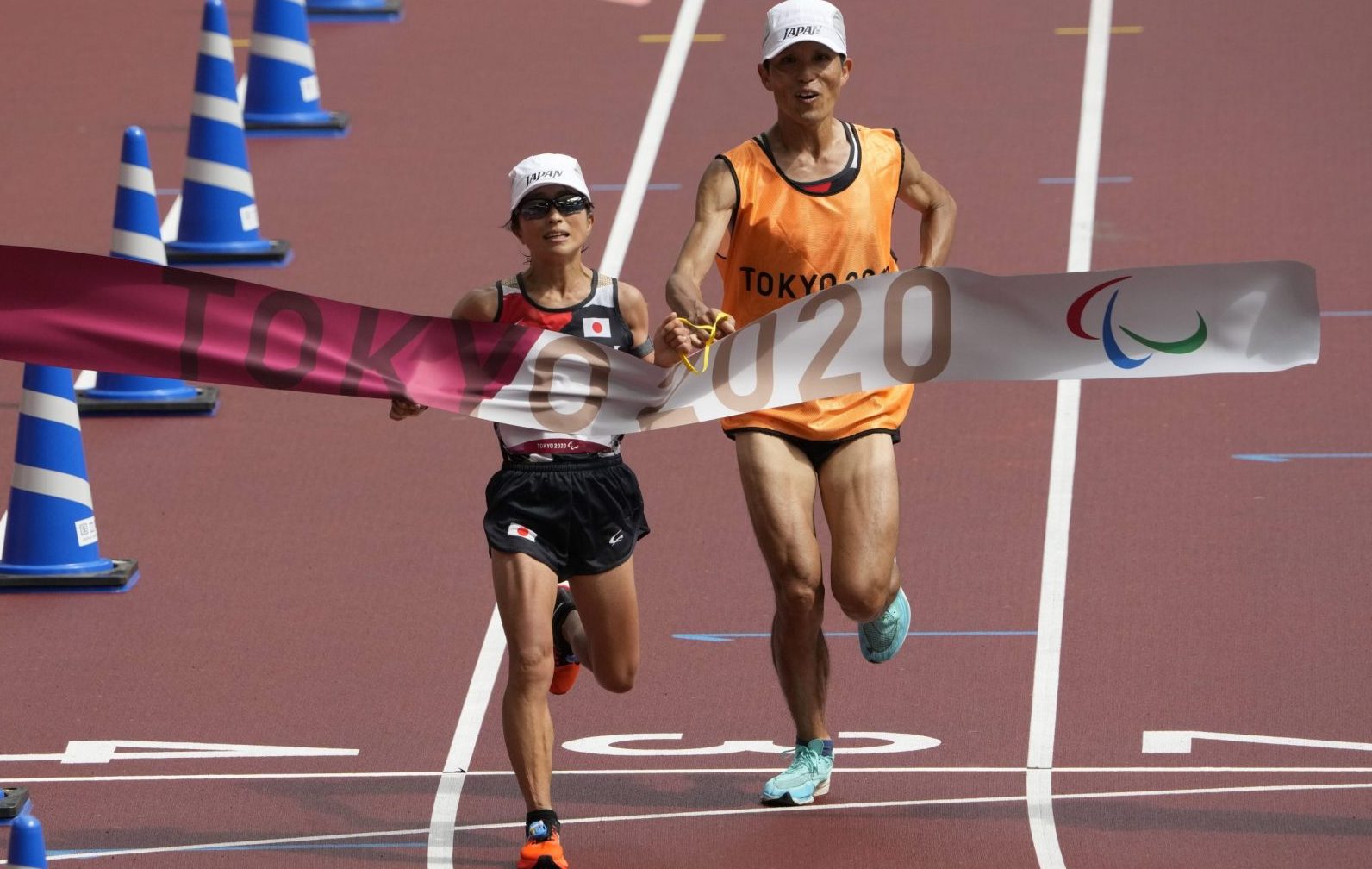 Marathon runner Misato Michishita began her quest for a gold medal hours before most folks sipped their first cup of coffee on Sunday morning, September 5.

Michishita took her first steps on the track at the New National Stadium at 6:50 a.m.

And with plenty of time to spare before lunchtime, Michishita had become a Paralympic champion in the women’s race in the T12 class (visual impairment for athletes whose sight is severely limited).

The 44-year-old resident of Dazaifu, Fukuoka Prefecture completed the 42.195-km course in a personal-best 3 hours, 0 minutes, 50 seconds with the support of guides Jun Shida and Yuka Aoyama in the nation’s capital.

Michishita, who made her Paralympic debut at the 2016 Rio de Janeiro Games and took home the silver medal in the T12 race in 3:06.52, won three consecutive titles at the London Marathon in 2017-19.

She achieved her goal of winning on home soil on the final day of the Tokyo Games on a cool, wet morning.

“We were all determined to complete unfinished business from five years ago,” Michishita said, speaking on behalf of her team, according to Kyodo News.

While running past Zojoji Temple, Tokyo Tower and the Imperial Palace among other iconic landmarks in the nation’s capital, Morishita relied on her guides to help her maintain a fast pace and observe how the other runners in the 10-woman field were doing.

Russian Elena Pautova, who went on to earn the silver medal, had slowed down near the 30-km mark. Shida pointed this out to Michishita. This prompted Michishita to increase her speed at that point, Shida said after the race, according to published reports.

And by doing so, Michishita separated herself from Pautova, who finished in 3:04.16.

After the race, Michishita reflected on her team’s winning strategy.

“I’m very happy. I started with a conservative pace because I knew it would come down to the last half of the race,” she said, according to Kyodo News. “I feel like I was able to get here because I had the best guide runners and best teammates for these Games.”

As an elementary school student, Michishita was diagnosed with corneal disease, and she lost vision in her right eye while in junior high school

Vision in her left eye has also worsened over the years.

En route to gold on Sunday, Michishita’s stamina and patience paid off.

She telegraphed her No. 1 goal for 2021 a few days before Christmas last year.

What happened? Michishita won the 2020 Hofu Yomiuri Marathon in world-record time (2:54.13) in Yamaguchi Prefecture on December 20.

In the men’s T12 race, Tadashi Horikoshi crossed the finish line in a season-best 2:28.01 to claim the bronze, and the four-time Paralympian improved upon his fourth-place showing at the Rio Games (2:36.50). Morocco’s El Amin Chentouf won the race in 2:21.43 to repeat as Paralympic champion. Australia’s Jaryd Clifford collected the silver, clocking 2:26.09. Tokyo resident Yutaka Kumagai was the seventh-place finisher (2:31.32)

In a dramatic finish in the women’s T54 wheelchair race, Australia’s Madison de Rozario beat Switzerland’s Manuela Schaer by a second, winning in 1:38.11, a Paralympic record.

“That was the longest 500 meters of my life,” de Rozario was quoted as saying by Agence France-Presse after the race. “That finish line couldn’t have come quick enough.”

Schaer’s time of 1:38.12 put her four seconds ahead of third-place finisher Nikita den Boer of the Netherlands. Wakako Tsuchida was fourth (1:38.32) and Tsubasa Kina placed seventh in 1:42.33.

“I don’t know how to feel. I’m just tired. Empty,” Hug was quoted as saying by Agence France-Presse.

In the men’s T46 class (a classification for athletes missing part of an arm), China’s Chaoyan Li triumphed in 2:25.50.

Daiki Kajiwara enjoyed an unforgettable experience on the final day of the Paralympics.

As a 13-year-old, Kajiwara was hit by a truck while en route to baseball practice in 2015. He had his right leg amputated.

Two years later, he began competing in para badminton, which made its Paralympic Games debut this year.

Kajiwara and Kim, a 43-year-old, four-time world singles champion, played a fierce competitive match. Their best exchange was a 67-stroke rally in Game 1 that lasted 92 seconds.

“I was always hoping to get the gold medal, and now that this dream has come true for me I’m super happy,” Kajiwara told reporters.

Japan snatched its second wheelchair badminton gold of the morning in women’s doubles.

She fulfilled her goal of winning titles at the Tokyo Games.

“I always aimed to become the first gold medalist, in either the singles or doubles. I am glad I managed it and I can take great confidence from that,” Satomi was quoted as saying by Kyodo News.

Satomi said her successful partnership with Yamazaki started in practice.

“We put out there what we learned in practice, communicating well and performing with grit,” the 23-year-old said.

Kajiwara and Murayama made quick work of their foes, winning the bronze in 37 crisp minutes, 21-18, 21-19. The tone-setting win in Game 1 included 13 service points.

Fujihara’s left leg was amputated above the knee when he was an infant, and he began playing badminton while in elementary school.

The United States overpowered China 3-1 to defend its title in women’s sitting volleyball.

China’s Meiling Zhao opened the scoring with the first spike but the U.S. women quickly took the momentum with two from Kathryn Holloway and Lora Webster.

Setter Kaleo Maclay, who won silver in London 2012 and gold in Rio 2016, was the USA’s key player in keeping the points flowing.

Holloway drilled home another spike at 10-6 and the U.S. closed out the first set in just 19 minutes.

It took just four minutes for the U.S. to go up 8-3 in the second set.

China edged back with Yanan Wang getting a spike in after a dig error by Webster, but the Americans pulled away and were soon up 12-6. China regrouped and eventually pulled even at 19-19 but Monique Matthews’ 11th spike of the match sealed the second set 25-20.

Going into the third, the U.S. was just a set away from back-to-back titles. Holloway opened with two points in quick succession and China got two back to even the score.

But Matthews got in her 12th spike to put her team ahead briefly. Wang responded with a series of spikes and China was soon leading 10-8.

Holloway and Heather Erickson leveled the score but China pulled away again. The points changed back and forth until China sealed the set 25-22 after 25 minutes.

China was more confident going into the fourth and denied the Americans an opportunity to pull away with a series of points by Yixiao Xu and Hongqin Lyu.

China was trailing 18-17 midway through the final set when Erickson, who had impressed throughout the match, set a spike at 24, and the match was closed out after a reception error by Zhang at 25-19.

Iran has won more Paralympic gold medals than any other nation in the sport.