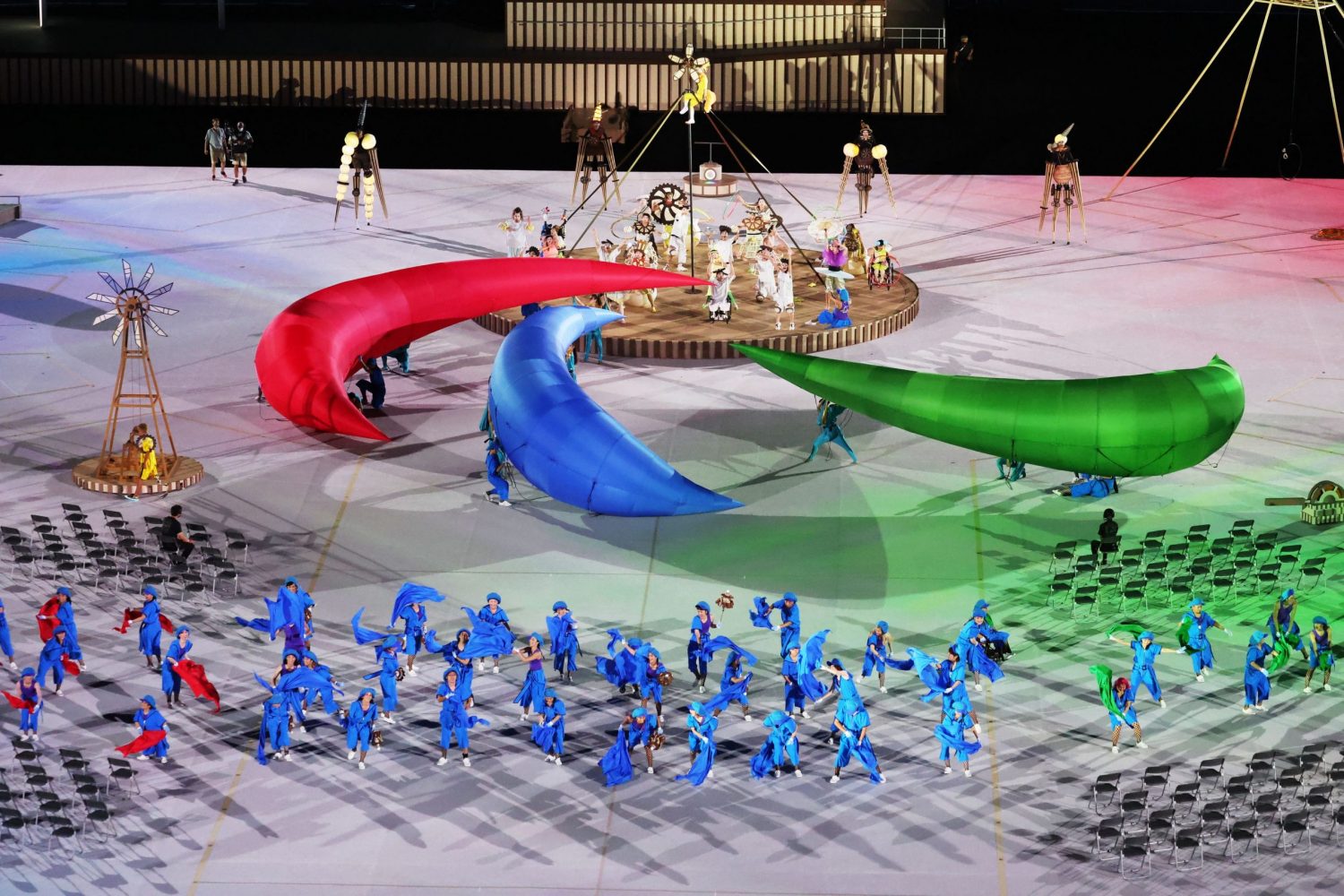 The start of the Tokyo Paralympics on August 24 was celebrated by the Blue Impulse Air Self-Defense Force (ASDF) aerial acrobatics team tracing out a red, blue, and green image in the cloudy skies over Tokyo.

The three colors stand for the “three agitos” tricolor symbol of the Paralympic Games. Agito is a Latin word meaning “I move.” It represents the Paralympic athletes who continuously challenge their limitations.

The Blue Impulse had already created a five-ring symbol of the Olympic Games in the sky earlier this summer, as it had in 1964 when Tokyo hosted the Olympics for the first time.

However, they had not flown at the time of the 1964 Tokyo Paralympics. That they did so this time is symbolic of how the Paralympics have grown in the intervening 57 years, becoming a true “parallel Olympics” whose value is widely recognized.

A Legacy of Changing Hearts and Minds

378 athletes from 21 countries participated in just nine events in the 1964 Tokyo Paralympics. Emperor Emeritus Akihito, who was then crown prince, served as honorary president of the Games. He and his consort (now Empress Emeritus) Michiko personally attended the events held at Oda Field in Harajuku on six of the seven days.

Then, when the Games finished, the couple invited Paralympics officials to the Togu Palace (now Akasaka Palace) to recognize their service. The crown prince told those in attendance that it was his “deep hope that the Paralympics will develop more points of contact with society as a whole, so that sports for the disabled will grow to attract spectators as readily as sports for regular athletes.”

The crown prince’s foresight has been richly rewarded by the universal attention being paid to this year’s Paralympics.

Approximately 4,400 athletes from 167 nations are gathering in Tokyo for these Paralympics. Among them will be the German long jumper Markus Rehm, who has been dubbed “the Blade Jumper” because of the blade-type prosthetic he wears. Just this June, Rehm broke his own world record of 8.41 meters when he jumped an amazing 8.62 meters. This eclipses the record of the 1964 Tokyo Olympics of 8.41 meters.

“Paralympic” was coined by the Japanese designer Hayato Takahashi, who at the time of the 1964 Tokyo Olympics created a poster using the term. He combined the words “paraplegia” (paralysis of the lower part of the body) and “Olympic.” The label became the official name starting with the Seoul Olympics of 1988. Since then, the range of athletes participating in the Paralympics has been expanded to include those suffering from injuries to the four limbs, visual impairments, cerebral palsy and other conditions, and the definition has now come to stand for “parallel Olympics.”

The “father of the Paralympics,” Dr. Ludwig Guttmann, who was a German-British neurologist at the Stoke Mandeville Hospital in the United Kingdom during WWII, is said to have told his patients: “Don’t worry about what you have lost. Just make the most of what you have left.” This has become the spirit of the Games.

The “god of management” Konosuke Matsushita also famously liked to say, “Do not mourn what you don’t have, make the most of what you have.” The underlying philosophy is the same. In fact, this lesson holds true not just for the Paralympics or in management, but for every aspect of our lives.

For example, the original goal of the Tokyo Paralympics was to fill all the seats at all venues. COVID-19 made that impossible, since in principle there were to be no spectators at the events. But Guttmann and Matsushita taught us to radically change our way of thinking and to adopt a spirit of never giving up. So the athletes and others involved with the Tokyo 2020 Games did not give up. They reached out to schools, inviting students to watch from the stands, and persuading local governments and other parties to help.

What the Paralympics seek from spectators is the rejection of prejudice and the awakening of a sense of social harmony.

Swimmer Junichi Kawai, captain of the Japanese team, has competed in five of the six Paralympics, winning a total of 21 medals, including five gold medals. An inductee into the Paralympic Hall of Fame, Kawai says, “I want to leave a legacy of the ‘heart’ not the ‘hard.’”

Indeed, the greatest legacy that these Games can leave is a change in the public’s heart.

One unforgettable chapter in the history of the Paralympics took place in London nine years ago. A day after the closing ceremony for the 2012 London Summer Olympics, billboards went up in the city, bearing the cheeky slogan “Thanks for the Warm-Up!” In other words, the Olympic Games had been the curtain raiser, but now came the main event — the Paralympics. This advertising gem resulted in sell-outs for Paralympic events and enthusiastic crowds at the competition venues. In the end, the London Games proved the biggest success in Paralympic history.

Martin Newman, the London-based communications strategist who coached the team that made the presentation of the winning Tokyo 2020 Olympic bid to the International Olympic Committee (IOC), recalls: “The participating athletes we met were not people deserving pity. They were exciting, impressive individuals. It wasn’t that London turned the Paralympics into a success, it was the Paralympics that changed London.”

We long for the Paralympics to perform the same magic in Tokyo this summer. The Olympics have sufficiently warmed up Tokyo and public opinion. Now begins a true festival of humanity. Let’s enjoy, get excited and give it our full support.