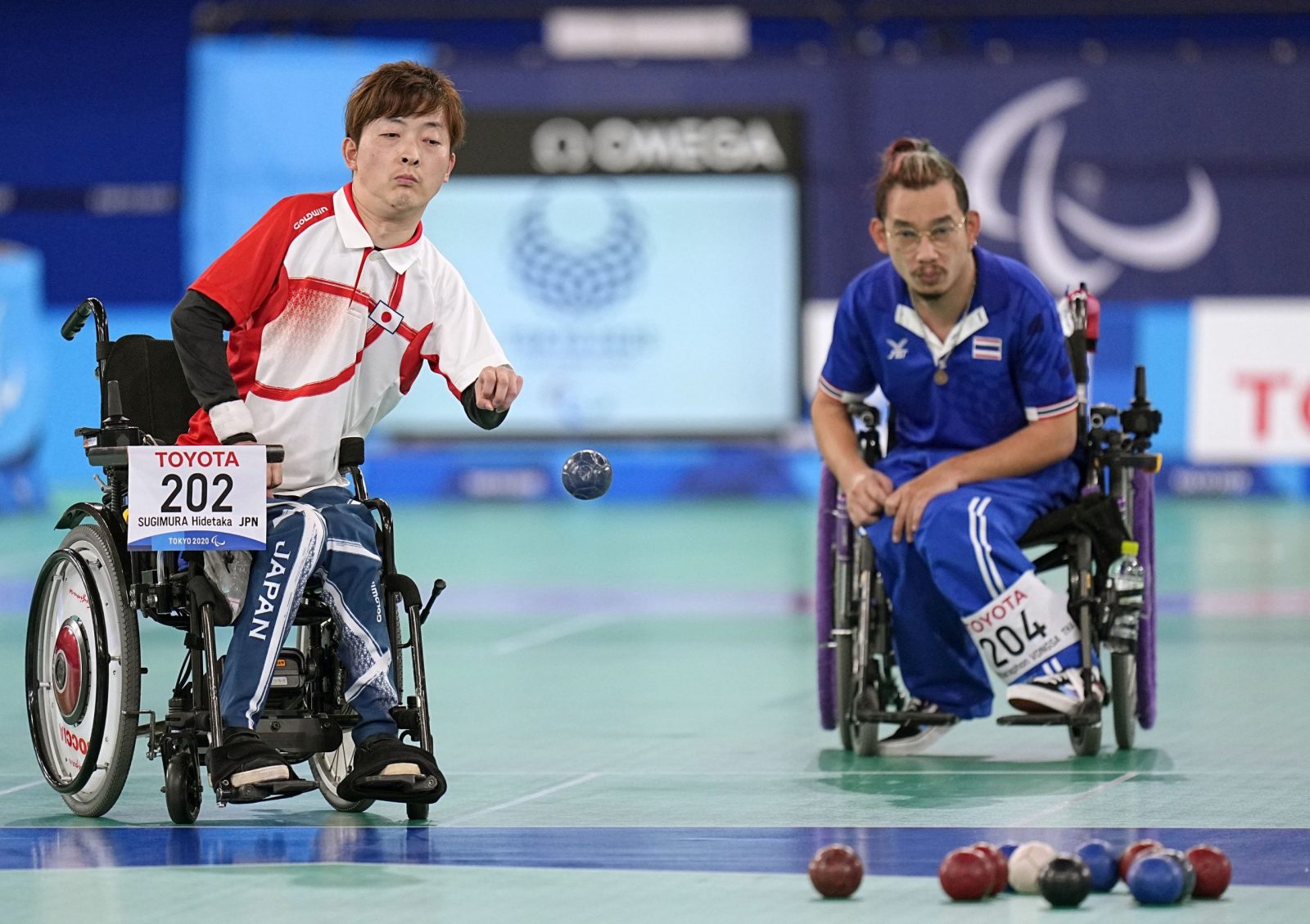 Hidetaka Sugimura competes in the men's individual BC2 final at Ariake Gymnastics Centre on September 1.

Hidetaka Sugimura has been a profile in perseverance since making his Paralympic Games debut in 2012, always striving to do better.

In 2012, the native of Ito, Shizuoka Prefecture was the 17th-place finisher in the men’s boccia individual BC2 event at the London Paralympics. He improved to fifth overall at the 2016 Rio de Janeiro Games.

Sugimura’s path to success at the Tokyo Paralympics intersected with encounters against past champions. He defeated 2012 gold medalist Maciel Santos of Brazil 3-2 in the semifinals on Tuesday, August 31 at Ariake Gymnastics Centre.

In the run-up to the Tokyo Games, Sugimura had declared that it was his goal to win the individual gold.

"I hope this gold medal will be an opportunity for many people to find out about boccia," Sugimura was quoted as saying by Kyodo News after the medal ceremony.

After the final, he said “it’s wonderful to be a gold medalist.” Speaking on NHK, he added that he’s really glad to be Japan’s first individual boccia champion at the Paralympics.

The BC2 category pairs athletes who have cerebral palsy. In Sugimura’s case, it was a congenital condition.

Sugimura’s involvement in the sport began in 2001, when he was a third-year high-school student.

Nine years later, Sugimura, who works at a nursing home in his hometown, made his debut for the national team at the 2010 Asia Para Games in China. He took home a silver medal from Rio in the BC1-2 team event.

A succinct primer on boccia follows, as detailed on Olympics.com.

“Boccia is a game of high strategy, where a single shot can reverse fortunes,” the quick introduction reads. “First, a white target ball called the jack is thrown, followed by the throwing or rolling of six red and six blue balls by each player, pair or team, called an ‘end’. At the close of each end, the player, pair or team whose ball is closest to the jack scores one point. They receive an additional point for every ball that sits closer to the jack than the opposition's closest ball. Individual and pairs matches consist of four ends, while team events are held over six ends. The athlete, pair or team with the most points is the winner.”

The highest-scoring play in boccia, known as a push on, is worth two points. In this case, the player hits their own ball and keeps it in play and knocks it closer to the jack.

In the gold-medal match, Sugimura demonstrated he was adept at mixing and matching offensive and defensive skills in the placement of his shots against his experienced Thai opponent.

With pinpoint accuracy and keen concentration, the left-hander elevated his game in the high-pressure environment with the Paralympic title on the line.

As a result, he led 2-0 after the first end, then he tacked on one point apiece in each of the next three ends.

Kunieda, the world No. 1, is now two wins away from ending a nine-year Paralympic singles title drought.

He won his first singles gold at the 2008 Beijing Games.

The opening set of the Kunieda-Houdet showdown lasted 87 minutes as both men engaged in an intense duel.

The second was wrapped up in 51 minutes, and Houdet, the No. 6 seed, was undone by five double faults.

On the other hand, Kunieda’s 19-for-25 success on first serves was a catalyst for success.

Up next: Kunieda will face Great Britain’s Gordon Reid, the No. 5 seed.

Markus Rehm’s sustained excellence in the long jump was on display at the New National Stadium, where he kept alive his gold-medal streak in the Paralympics.

The German, whose right leg was amputated below the knee when he was 14, now owns three consecutive gold medals, a run that began at the 2012 London Games (T42/44 event) and T42 event in Rio four years later.

This time, the 33-year-old competed in the T64 final (athletes without one leg below the knee) and produced the same results.

Rehm soared 8.18 meters through the air, the longest distance in the final. France’s Dimitri Pavade took the silver with a leap of 7.39 meters, while Trenten Merrill of the United States earned the bronze (7.08).

Jennette Jansen’s longevity as an athlete is one of the defining characteristics of her life.

On Tuesday, August 31, Jansen finished third in the women’s H4-5 time trial race. Missing out on a gold motivated Jansen for her second event at the Tokyo Games.

"Yesterday I was very disappointed I got the bronze medal,” Jansen said, according to Olympics.com. “When you look back, it was the highest result I could reach in the mixed class with H5, H4. On a course like this that is hilly, it’s impossible to win against the girls who have the power.

"I was satisfied with it and I could enjoy it a little, but I was still hungry for the gold. This was the race I was waiting for and it was a very nice battle.”

In 1988, Jansen, who was born without fully developed legs and had them amputated when she was 9, made her Paralympic Games debut in Seoul, where she competed in athletics. It was a dynamic debut, with Jansen grabbing a trio of gold medals in the 800-, 1,500- and 3,000-meter track races. More success followed at the 1992 Barcelona Games, with a silver in the 1,500 and another in the wheelchair marathon race.

Jansen represented the Netherlands in wheelchair basketball at the 1996 Atlanta Games. She departed with a silver medal.

In 2012, Jansen switched to road cycling and made her Paralympic debut in that sport at the Rio Games, nabbing bronze in the H5 road race.

All told, she now owns a collection of 10 Paralympic medals and a fierce desire to keep competing on the global stage.

“I like sports very much,” Jansen said on Wednesday, “and it’s proving to myself I can still do this, although of course there will come a moment when the younger generation will pass me."